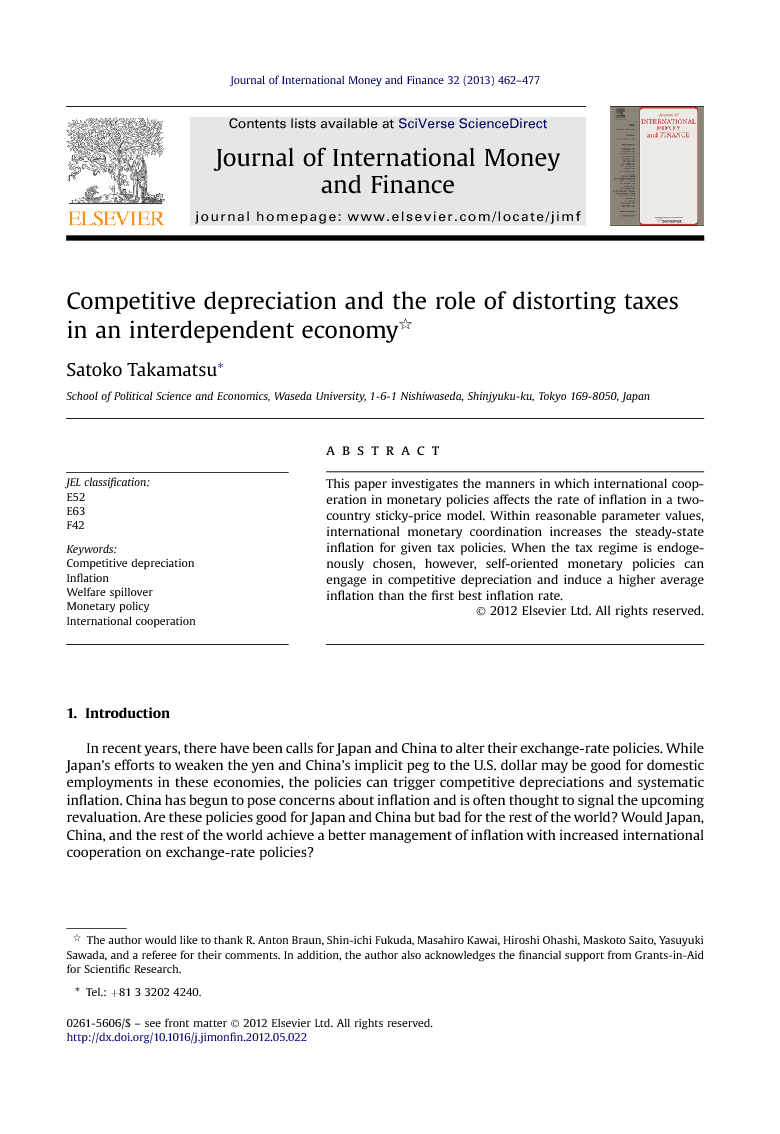 This paper investigates the manners in which international cooperation in monetary policies affects the rate of inflation in a two-country sticky-price model. Within reasonable parameter values, international monetary coordination increases the steady-state inflation for given tax policies. When the tax regime is endogenously chosen, however, self-oriented monetary policies can engage in competitive depreciation and induce a higher average inflation than the first best inflation rate.

This paper has analyzed how the international cooperation of monetary policies alters the inflation rate in a simple sticky-price model. We have examined whether the traditional analysis of the beggar-thy-neighbor incentive of monetary policy, and thereby, competitive depreciation, exists or not. For the given tax rates, international monetary policy cooperation increases the average inflation rate. This result arises irrespective of whether or not the fiscal tax eliminates the monopoly distortions. When tax rates are set optimally to maximize the welfare in each regime, monetary cooperation can eliminate the inflation bias under noncooperation if the expenditure-changing effect of monetary policy is sufficiently strong, restoring the competitive depreciation story. Under the small expenditure-changing effect, on the other hand, cooperation prevents the deflation that would emerge under a noncooperative regime. One caveat is that the examined alternative setup assumes that the fiscal and monetary authorities share the same functional form of the objective. It is also interesting to examine the cases in which the fiscal and monetary authorities have separate policy objectives. For instance, we can consider the provision of public goods in the fiscal objective. For future research, we plan to relax the assumption of the law of one price and introduce local currency pricing into the environment of endogenous tax. Since the existing literature indicates that pricing-to-market itself can produce competitive depreciation, it is meaningful to see whether the combination of these two elements overturns the traditional beggar-thy-neighbor property again. Another possible extension is a multi-period model. While we focused on the two-period setting for the purpose of insulating intratemporal issues from intertemporal ones, the introduction of asset trading would provide an additional element with which policymakers evaluate welfare effects. When we consider repeated games, the time-consistency features may also arise. Further, it is worth examining the equivalence of a sales tax and other types of distorting taxes, such as a consumption tax. Although this is beyond the scope of this paper, considering government expenditure in addition to distorting taxes would also provide insightful results. Government spending increases the supplier's income and hours worked and can further alter the equilibrium. For instance, public consumption goods such as education and health care would also improve the utility of residents. Another possibility is the impact on productivity. The infrastructure that the government invests in can work as the public input of private production. Moreover, government measures against environmental pollution might ultimately stimulate labor productivity, which this paper treats as a stochastic exogenous variable. In either case, government expenditure is likely to fall in the domestic market, and thus, it might produce an additional mechanism in which cooperation alters the inflation.