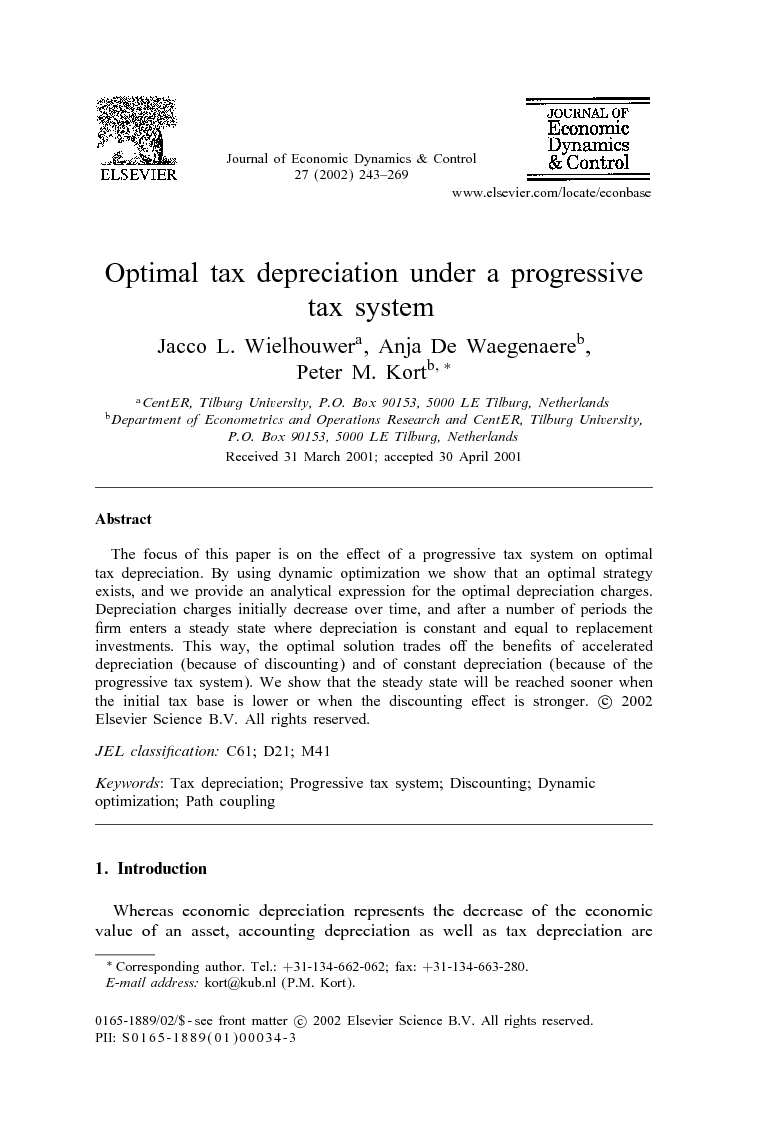 The focus of this paper is on the effect of a progressive tax system on optimal tax depreciation. By using dynamic optimization we show that an optimal strategy exists, and we provide an analytical expression for the optimal depreciation charges. Depreciation charges initially decrease over time, and after a number of periods the firm enters a steady state where depreciation is constant and equal to replacement investments. This way, the optimal solution trades off the benefits of accelerated depreciation (because of discounting) and of constant depreciation (because of the progressive tax system). We show that the steady state will be reached sooner when the initial tax base is lower or when the discounting effect is stronger.

Whereas economic depreciation represents the decrease of the economic value of an asset, accounting depreciation as well as tax depreciation are often used as tools to affect income reported in financial reports or tax reports. Two fundamental contributions to the theory of economic depreciation are due to Hotelling (1925) and Baumol (1971). Hotelling (1925) considers a firm whose aim is to maximize the value of its property, which is defined by the present value of the output minus the operating costs. Depreciation then equals the rate of decrease of value of the property, and can be determined for any given demand function. Baumol (1971) takes into account that the depreciation policy affects price, and thereby also demand. The optimal depreciation policy is then defined as the one that yields intertemporal patterns of prices that result in (socially) optimal future revenue streams. Burness and Patrick (1992) consider a profit maximizing monopolist who is subject to a regulatory constraint on its rate of return. Accounting depreciation charges can then be used as a tool to increase realized profit without increasing reported profit. They show that, under rather mild conditions, the optimal scheme is not accelerated. As opposed to the above-mentioned literature, we focus on tax depreciation rather than economic or accounting depreciation. Since taxable income consists of gross revenue reduced with depreciation charges, the depreciation method that is chosen for tax purposes can be used as a strategic tool to allocate taxable income over future periods (see e.g. Scholes and Wolfson, 1992). Firms often have the option to choose between one or more accelerated methods, which have decreasing depreciation charges over time, and the straight line method, which has constant depreciation charges over time. Wakeman (1980) has shown that in a situation where there is a flat tax rate and where taxable income is non-negative in all periods and for all depreciation methods under consideration, the most accelerated method is preferable for tax purposes. This is a consequence of the fact that a more accelerated method typically shifts taxable income to later periods, and when future money is discounted, paying taxes later is preferable to paying them now. These results depend on the assumptions of non-negative income and the flat tax rate. The fact that less accelerated depreciation can be optimal in case future cash flows are stochastic and the tax structure is progressive is shown in Berg et al. (2001). The above-described literature on optimal tax depreciation considers a static situation where a given value has to be depreciated over a maximum number of periods. In practice, most firms regularly engage in replacement investments and adjust their depreciation policy accordingly. Moreover, many countries do not use a flat tax rate in corporate taxation. The focus of this paper therefore is on optimal tax depreciation given reinvestments and a progressive tax system.1 In order to study the effects of the tax system on the optimal depreciation charges, we focus on a firm in a steady state with respect to its investment policy, i.e. the firm makes replacement investments in order to compensate for technical deterioration, so that its capital stock remains constant.2 The main results are as follows. The firm reaches a steady state with respect to tax depreciation after a finite number of periods. In the steady state the depreciation charge equals the amount that is reinvested. Before the steady state is reached, the optimal policy trades off the benefits of accelerated depreciation and of constant depreciation. Accelerated depreciation shifts taxable income to later periods, but constant depreciation can lead to a lower marginal tax rate. Therefore, contrary to what is often believed, the most accelerated method is not necessarily the best from a tax perspective, and this even holds if taxable income is always positive and deterministic. From a technical point of view it is interesting that the path coupling procedure, which is mostly used for solving continuous time dynamic models, is now applied within a discrete time setting. This paper is organized as follows. In Section 2 the model is formulated and the necessary conditions are derived. The model is solved in Section 3 by using the path coupling method. Readers who are less interested in technical details can skip Section 3 and move on directly to Section 4, where the results are economically analyzed. In Section 5 the model is extended to cases where future income is stochastic, and where depreciation is limited. The paper is concluded in Section 6.

This paper determines the optimal depreciation policy in a going concern setting for firms that face a progressive tax structure. The important incentives in the depreciation decision are the time value of money and the progressivity in the tax structure. Due to the first effect, firms tend to depreciate as accelerated as possible, since future tax deductions are discounted. Due to the latter effect, firms have an incentive to smoothen the depreciation in order to face the lowest marginal tax rate. As a consequence, the optimal schedule is accelerated and balances the tradeoff between the discounting effect and the progressive tax effect. After a finite number of periods, the firm reaches its steady state with respect to tax depreciation, where all replacement investments are depreciated at once (i.e. expensed). In the last section it is shown that the tax base converges to a steady state (but never actually reaches it) when the maximum fraction of the tax base that can be depreciated is limited to be less than one. In this case it is simply not possible to expense the investment costs immediately. The tax base will remain larger than the investment level, but the amount of tax depreciation again converges to the investment level. Furthermore, it is shown that the results of the model extend to the case where future income is uncertain.