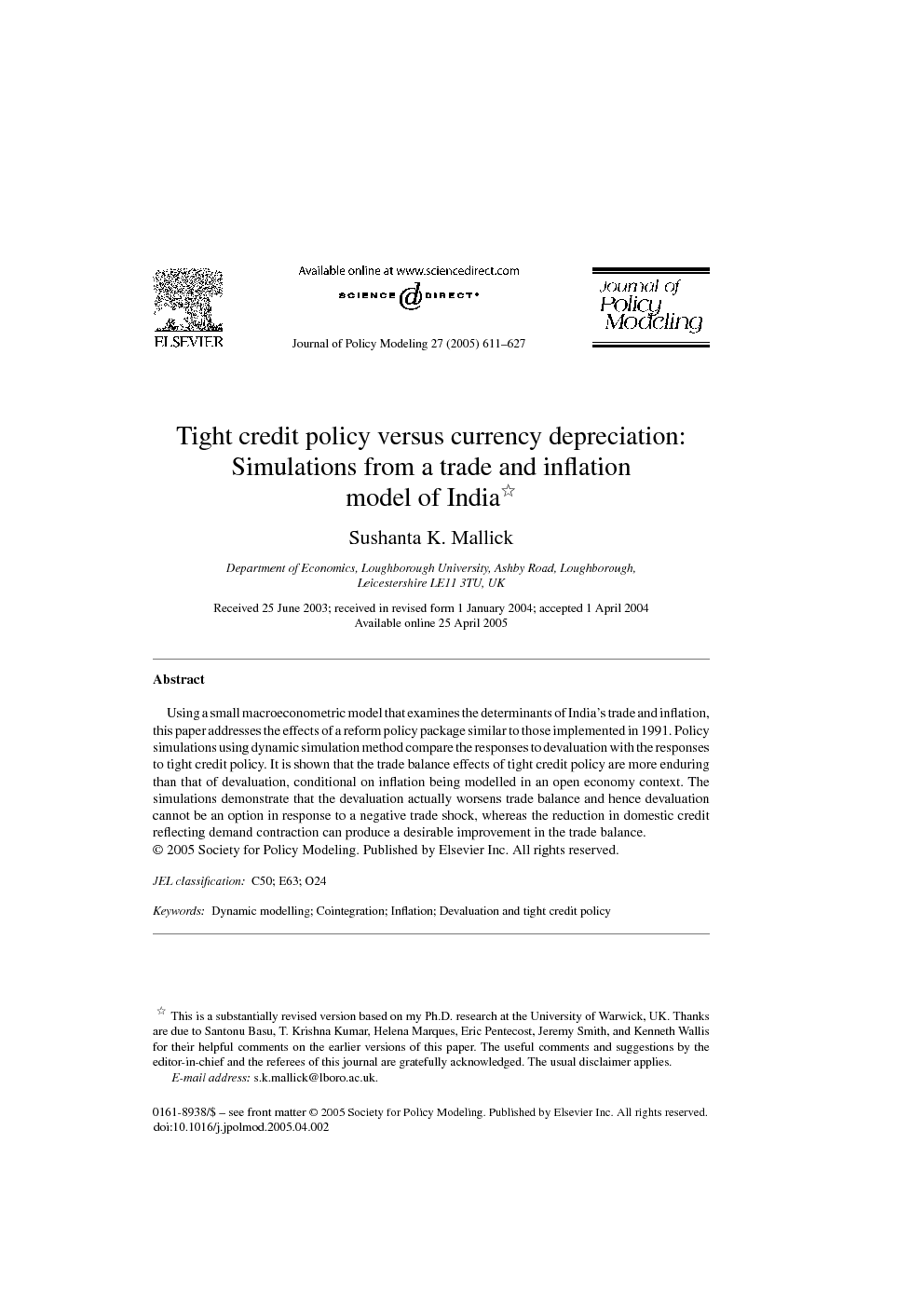 Using a small macroeconometric model that examines the determinants of India's trade and inflation, this paper addresses the effects of a reform policy package similar to those implemented in 1991. Policy simulations using dynamic simulation method compare the responses to devaluation with the responses to tight credit policy. It is shown that the trade balance effects of tight credit policy are more enduring than that of devaluation, conditional on inflation being modelled in an open economy context. The simulations demonstrate that the devaluation actually worsens trade balance and hence devaluation cannot be an option in response to a negative trade shock, whereas the reduction in domestic credit reflecting demand contraction can produce a desirable improvement in the trade balance.

The macroeconomic scenario in the Indian economy in the summer of 1991 was characterised by severe fiscal and external imbalances, contributing to the balance of payments (BOP) crisis.1 The crisis was mainly due to a shortage of external liquidity rather than an insolvency problem. To get over the BOP difficulty, in July 1991, the government of India accepted the IMF credit, conditional on a set of policies, that is, by announcing a significant devaluation and monetary squeeze, aimed to reduce fiscal- and current-account deficits. The two standard policy instruments – namely reducing the central bank (henceforth RBI) credit to the government (a key source of financing fiscal deficit), and devaluing the currency – were adopted, which are broadly considered as a recipe for developing economies (DEs) when they encounter BOP crises. Despite doing so, India's combined fiscal deficit in 1990s remained at 7.8% of GDP, barely changed from 8.1% of GDP in 1980s (same is the case for the central government deficit alone, which just declined to 5.9% from 6.8% of GDP, respectively). But the rate of growth of net RBI credit to the central government that creates monetized deficit has substantially slowed down from 20% on average in 1980s to 7.1% in 1990s, while the growth of other banks’ credit to the government has increased from an annual average rate of 19.2% in 1980s to 21.2% in 1990s, reflecting the government's increased market borrowing to finance its deficit. Thus on the fiscal front, imprudence remains the government's biggest problem, while on the monetary side, tighter prudential norms following liberalisation have tightened credit standards,2 weakening small businesses’ access to the credit market. In this paper controlling aggregate domestic credit as a stabilisation strategy, is examined in line with the standard monetary approach to the BOP, which remains the mainstay of the IMF-supported stabilisation packages. Regarding the exchange rate, the value of the rupee has depreciated by 63.6% to INR45.68/$ in 2000–2001 (which happens to coincide with the current level in 2004 on the back of US dollar weakness) compared to 1989–1990, amounting to an average depreciation of 8.4% a year. This suggests that the RBI prefers to accommodate rupee depreciation, while aggressively preventing appreciation, as part of the RBI's intervention strategy by sterilizing major part of the capital inflows so as to target a stable real exchange rate (see Baig, Narasimhan, & Ramachandran, 2003, and Kohli, 2003). Such significant rupee depreciation partly explains why annual average inflation (based on the benchmark wholesale price index) remains so high at 8% in both 1980s and 1990s. The average broad money (M3) growth remained stable at 17.2% in both 1980s and 1990s. But in the second half of 1990s the average inflation rate being 5.3% can be in part explained by credit squeeze, as the rate of growth of domestic credit slowed to an average of 14.4% in 1990s from 18.1% in 1980s. Naastepad (2003) finds that whenever fiscal reform leads to a squeeze on available working capital credit, deficit reduction will lead to only a limited decline in inflation and a modest BOP improvement. The basic questions that arise in this context are: (1) whether the reduction in domestic credit or devaluation is the better solution than the other to BOP problem, irrespective of the exchange rate regime? (2) By how much should domestic credit be reduced so as to reduce fiscal deficit by a given amount? (3) By how much should the currency be devalued; or can we evaluate alternative devaluation strategies? To answer these quantitative policy questions, a new model of trade and inflation is developed, based on Sundararajan (1986) [henceforth VS], although VS did not model the price formation process and paid no attention to the question of non-stationarity in the time series.3 This paper models trade and inflation using a modelling strategy that develops a structural model via the single-equation error correction approach following Phillips–Hansen's method of cointegration. The paper then evaluates the comparative performance of the dynamic responses to devaluation and tight credit policy. A distinctive feature of this study is that it provides a supply side model of inflation in addition to the treatment of the demand factor. Contrary to VS's claim of the superiority of devaluation over tight credit policy, policy simulations in this paper show that the trade balance effects of tight credit policy are more enduring than that of devaluation. The devaluation actually worsens the trade balance with no J-curve effect,4 whereas the reduction in domestic credit produces a desirable improvement in the trade balance, as it squeezes domestic demand, and is more effective in reducing inflation, while devaluation generates higher inflation.5 In this paper, the level of real output is left exogenous as in VS, since the focus is on short-run stabilisation, but the long-run adverse effect of credit contraction on output is already well established (for example, see Mallick, 1999a). The plan of this paper is as follows. The next section presents a model of trade and inflation, with estimation results discussed in Section 3, policy simulations and concluding remarks in Sections 4 and 5, respectively.

This paper focused on the inflationary and the trade balance impacts of the devaluation and the tight credit policy associated with India's 1991 crisis. A supply-side model of inflation determination in addition to the standard demand framework was estimated. Price inflation responds not only to the movement of international prices, but also more to other cost components than the excess demand. The model has then been simulated to evaluate the dynamic responses to devaluation and tight credit policy. The paper argued that devaluation is not the most efficient policy instrument, whereas short-run solutions like credit control would be a better solution for temporary and exogenously generated disequilibria. Although the rupee continuously depreciated with respect to the dollar throughout the 1990s, exports did not respond to the falling rupee correspondingly, even with several export-related incentive schemes. This suggests that nominal currency devaluation does not improve overall export performance significantly, and consequently deficit on the trade account continues. Thus, for short-run stabilisation, controlling credit flow to reduce demand can be a better policy strategy than devaluing the currency to improve external balance. On the contrary such currency devaluation adds to higher inflation, leading to further depreciation and so on. A clear distinction between temporary and permanent responses was made in this paper, as the overall effect of the temporary policy shock is neutral in the long-run. Evidence showed that devaluation was not a temporary shock, as the currency depreciation continued throughout the 1990s. In this model output was considered exogenous to highlight the complex dynamic interactions between inflation and trade balance. However, output exogeneity is clearly restrictive because of likely output effects of devaluation and the effects of credit conditions on investment. An explicit link between monetary, external, and output sector is essential for the model to be useful in studying the effects of medium and long-term trade policy choices on the economy