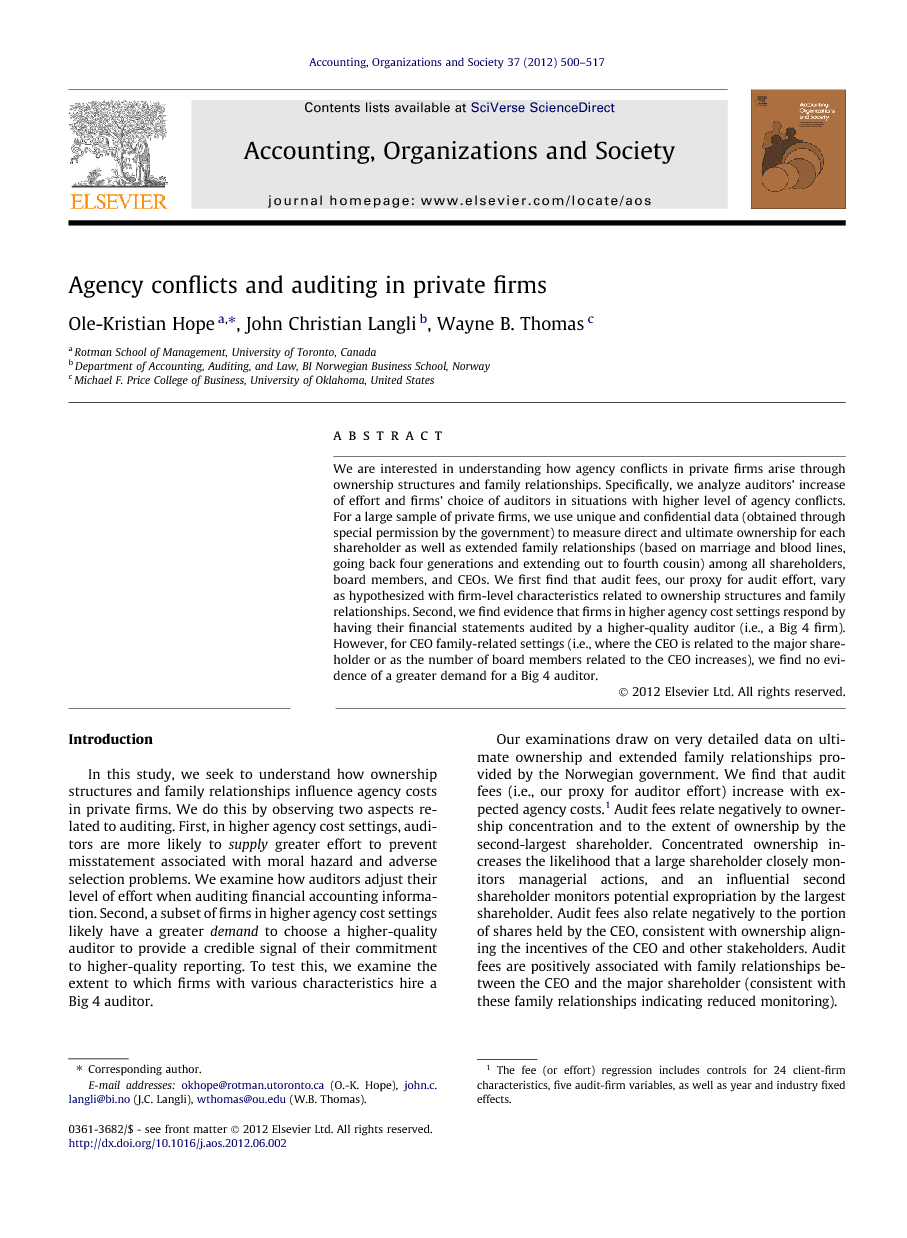 We are interested in understanding how agency conflicts in private firms arise through ownership structures and family relationships. Specifically, we analyze auditors’ increase of effort and firms’ choice of auditors in situations with higher level of agency conflicts. For a large sample of private firms, we use unique and confidential data (obtained through special permission by the government) to measure direct and ultimate ownership for each shareholder as well as extended family relationships (based on marriage and blood lines, going back four generations and extending out to fourth cousin) among all shareholders, board members, and CEOs. We first find that audit fees, our proxy for audit effort, vary as hypothesized with firm-level characteristics related to ownership structures and family relationships. Second, we find evidence that firms in higher agency cost settings respond by having their financial statements audited by a higher-quality auditor (i.e., a Big 4 firm). However, for CEO family-related settings (i.e., where the CEO is related to the major shareholder or as the number of board members related to the CEO increases), we find no evidence of a greater demand for a Big 4 auditor.

This study provides empirical evidence of agency conflicts associated with ownership characteristics and family relationships for private firms in the Norwegian market. Using a detailed data set obtained by special permission from the government, we are able to measure ultimate ownership concentration, ultimate ownership of the second largest shareholder and of the CEO, and family relationships among owners, board members, and CEOs for all Norwegian private limited liability firms. These data allow us to simultaneously test multiple sources of agency conflicts. We first test for the extent of agency conflicts using audit fees. Controlling for a large number of client-firm and audit-firm characteristics, we predict and find that ownership characteristics and family relationships explain audit fees. Specifically, we find that audit fees decrease (i.e., audit effort decreases) as ownership concentration increases and as the proportion of shares held by the second largest shareholder increases. The first result is consistent with greater ownership concentration alleviating agency costs between shareholders and the managers (i.e., vertical agency costs). Larger shareholders can more efficiently monitor managers. The second result is consistent with reduced agency costs between controlling shareholders and minority shareholders (i.e., horizontal agency costs). A second large shareholder serves as a monitor of a controlling shareholder who potentially has the ability to extract private benefits from minority shareholders. Related to the CEO, we find that as CEO ownership increases, audit fees decrease. This is consistent with increased ownership aligning the incentives of the CEO with those of the firms’ other stakeholders. In contrast, holding CEO ownership constant, we find that when the CEO is a member of the largest owning family, audit fees increase (i.e., auditor effort increases). This finding suggests that shareholders are less likely to act as independent monitors of the CEO when a family relationship exists, increasing the probability of misappropriation by the CEO or extraction of private benefits by controlling owners. For board independence, we find that audit fees decrease as the proportion of board members from the largest owning family increases. This finding reflects the likelihood that those inside the firm (board members) are more likely to act as effective monitors on behalf of those outside the firm (controlling owners) when a family relation exists. We also find that boards seem to lose their independence as the proportion of board members from the CEO’s family increases. This result follows from the natural expectation that family relationships with the CEO impair the oversight responsibility of the board. As our second test, we consider each of our agency settings and the firm’s demand for a Big 4 auditor. Consistent with results found for the auditor effort tests, the demand for a Big 4 auditor decreases with ownership concentration, level of ownership by the second largest owner, and family relationships between the board and the largest owner. We find no relation between demand for a Big 4 auditor and CEO ownership for our main tests but we do in sensitivity tests. Finally, for our two CEO family-related agency cost settings, we observe no impact on the demand for a Big 4 auditor when the CEO is related to the major shareholder or as the number of board members related to the CEO increases. These insignificant relations likely reflect a trade-off between the benefits of more credible reporting from using a Big 4 auditor versus the potential costs of increased fees associated with a Big 4 auditor and the reduced ability of the CEO (or the CEO’s family) to extract resources from the firm. Our research makes a contribution by providing a detailed investigation of the agency settings for private firms. Several differences exist between private and public firms, and results for one group are not necessarily expected to be the same as those for the other. In addition, in aggregate private firms provide the majority of economic activity throughout the world. We obtain a unique database for private firms in Norway to provide tests of the impact of ownership characteristics and family relationships on agency conflicts. This database entails combining ownership characteristics and family relationships using social security numbers, available only through special permission from the government. There is ample opportunity for future research to further explore the issues we examine in this study. Perhaps the most obvious suggestion would be to test for economic consequences of variations in the agency conflicts and/or audit variables that we consider. Another possibility is to make further use of the register data available through linking databases using social security numbers. For example, auditor independence issues could be examined by considering auditors’ personal income and wealth. Other research could make use of interesting aspects of alternative institutional environments, or use research methods other than archival data to explore agency conflicts in private firms.