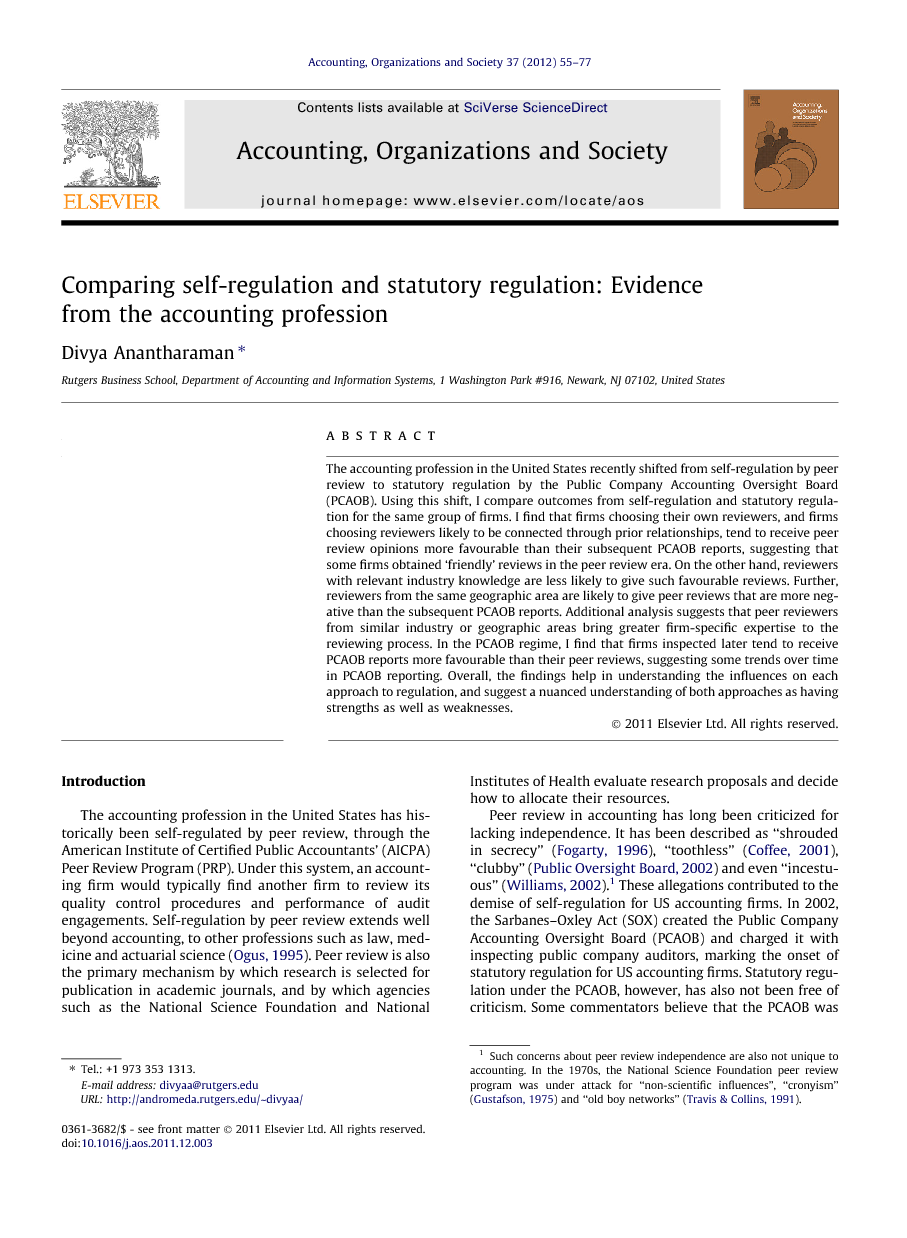 The accounting profession in the United States recently shifted from self-regulation by peer review to statutory regulation by the Public Company Accounting Oversight Board (PCAOB). Using this shift, I compare outcomes from self-regulation and statutory regulation for the same group of firms. I find that firms choosing their own reviewers, and firms choosing reviewers likely to be connected through prior relationships, tend to receive peer review opinions more favourable than their subsequent PCAOB reports, suggesting that some firms obtained ‘friendly’ reviews in the peer review era. On the other hand, reviewers with relevant industry knowledge are less likely to give such favourable reviews. Further, reviewers from the same geographic area are likely to give peer reviews that are more negative than the subsequent PCAOB reports. Additional analysis suggests that peer reviewers from similar industry or geographic areas bring greater firm-specific expertise to the reviewing process. In the PCAOB regime, I find that firms inspected later tend to receive PCAOB reports more favourable than their peer reviews, suggesting some trends over time in PCAOB reporting. Overall, the findings help in understanding the influences on each approach to regulation, and suggest a nuanced understanding of both approaches as having strengths as well as weaknesses.

The accounting profession in the United States was self-regulated by peer review until 2003, when statutory regulation by the Public Company Accounting Oversight Board (PCAOB) was introduced. I use the shift from peer reviews to PCAOB inspections to compare outcomes across self-regulation and statutory regulation for the same group of firms. The results, summarized in Table 9, indicate that firms that choose their own reviewers and choose reviewers likely to be connected through prior relationships tend to receive peer reviews more favourable than their PCAOB reports. Peer reviewers with similar industry expertise as the reviewed firm, on the other hand, are likely to agree with the PCAOB, while reviewers located in the same area tend to be more unfavourable than the PCAOB. Further tests show that peer review opinions from reviewers in the same industry or geographic area are informative about future audit failures, suggesting that these reviewers bring some superior knowledge to the review process. The results suggest a nuanced understanding of both peer reviews and PCAOB inspections as having strengths and weaknesses. While PCAOB inspectors may be less susceptible to “friendly” reviews than peer reviewers, peer reviewers may be able to bring greater familiarity with local clients and practices that may not be easily accessible to PCAOB inspectors. The study is subject to many limitations besides those already noted. There is relatively little variation in reviewer type, raising concerns about the robustness of the documented effects of reviewer type. The fact that a vast majority of firms get ‘firm-on-firm’ reviews could limit our ability to comment on the effectiveness of other methods of identifying reviewers. More broadly, the low explanatory power of the models shows that our understanding of the factors affecting peer reviews and PCAOB inspections is far from complete. Both outcomes could be influenced by unspecified features of the review team or the reviewed firm, allowing for alternative interpretations of the findings.29 Furthermore, the research design is non-experimental. The fact that PCAOB inspections cover only public clients, that peer reviews and PCAOB inspections occur at different points in time and are separated by the Sarbanes–Oxley Act, complicates inferences. While I control for some audit firm characteristics and changes therein, the lack of public data on audit firms makes any such controls rudimentary. SOX, in particular, changed the audit environment considerably, and affected each audit firm differently. The multi-faceted and pervasive impact of SOX cannot be comprehensively controlled for, and is a fundamental limitation of the approach in this study. While it is tempting to interpret the results as suggesting that peer reviews (or PCAOB reports) are “too” positive or too negative for certain firms, no such inference can be made, as there is no objective benchmark for the “right” number of deficiencies expected from any review, done either by the PCAOB or by a peer (Wallace, 1991). Rather, this study can speak only to the more modest objective of comparing outcomes from two different systems of regulation and offering explanations as to why one system produces more positive (or negative) outcomes, relative to the other, in various situations. Finally, while peer review exists in many professions, its strengths and weaknesses lie ultimately in its institutional features. Hence, results from the AICPA’s Peer Review Program may not generalize to other settings. Future research could examine the effectiveness of peer review in other settings where it continues to be the principal regulatory mechanism. Furthermore, our understanding of the PCAOB is still in its infancy. With data from subsequent rounds of PCAOB inspections becoming available, research could examine in more detail the influences on PCAOB inspections, contributing to the debate on self-regulation versus statutory regulation in accounting.