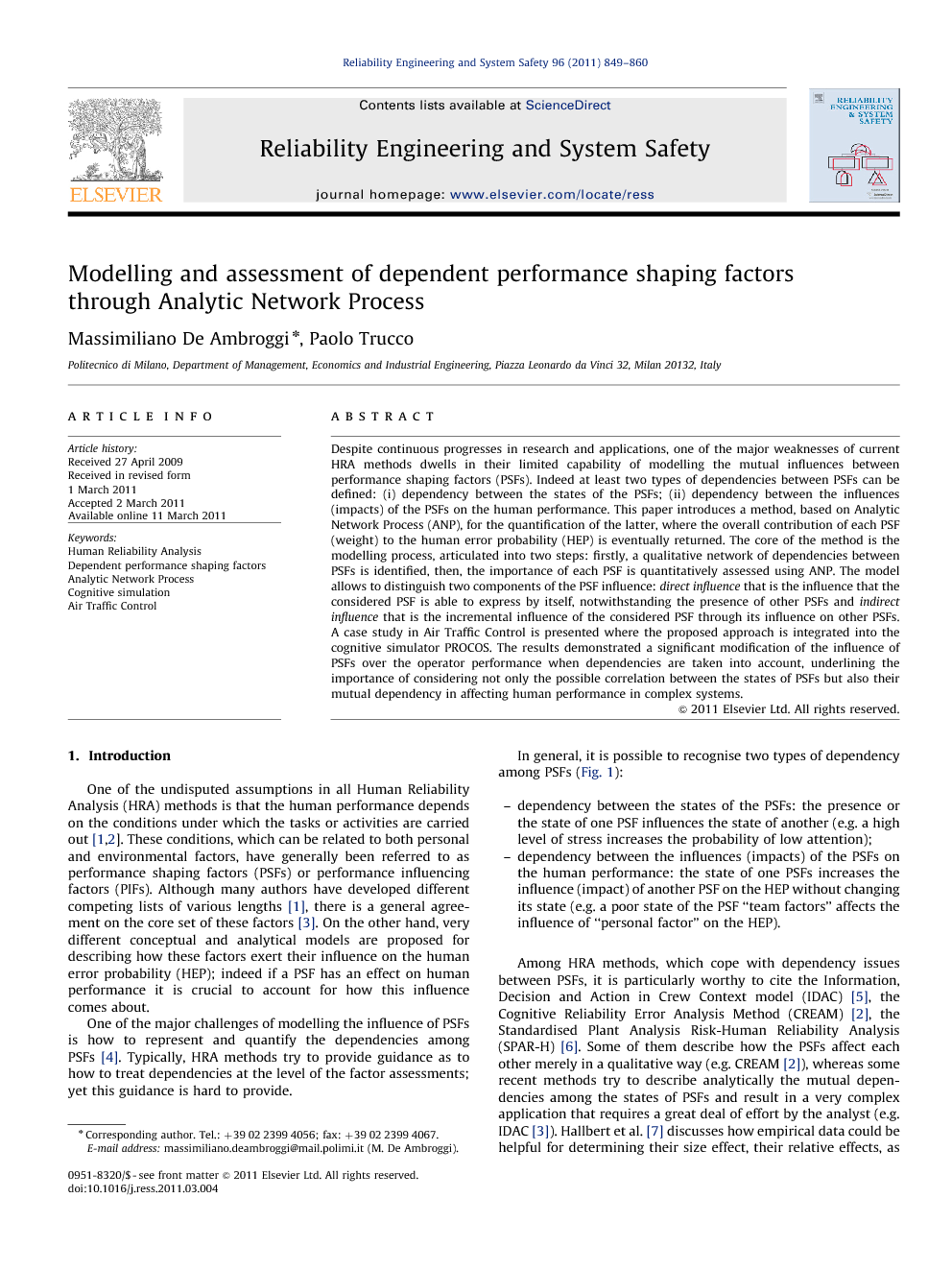 Despite continuous progresses in research and applications, one of the major weaknesses of current HRA methods dwells in their limited capability of modelling the mutual influences between performance shaping factors (PSFs). Indeed at least two types of dependencies between PSFs can be defined: (i) dependency between the states of the PSFs; (ii) dependency between the influences (impacts) of the PSFs on the human performance. This paper introduces a method, based on Analytic Network Process (ANP), for the quantification of the latter, where the overall contribution of each PSF (weight) to the human error probability (HEP) is eventually returned. The core of the method is the modelling process, articulated into two steps: firstly, a qualitative network of dependencies between PSFs is identified, then, the importance of each PSF is quantitatively assessed using ANP. The model allows to distinguish two components of the PSF influence: direct influence that is the influence that the considered PSF is able to express by itself, notwithstanding the presence of other PSFs and indirect influence that is the incremental influence of the considered PSF through its influence on other PSFs. A case study in Air Traffic Control is presented where the proposed approach is integrated into the cognitive simulator PROCOS. The results demonstrated a significant modification of the influence of PSFs over the operator performance when dependencies are taken into account, underlining the importance of considering not only the possible correlation between the states of PSFs but also their mutual dependency in affecting human performance in complex systems.

One of the undisputed assumptions in all Human Reliability Analysis (HRA) methods is that the human performance depends on the conditions under which the tasks or activities are carried out [1] and [2]. These conditions, which can be related to both personal and environmental factors, have generally been referred to as performance shaping factors (PSFs) or performance influencing factors (PIFs). Although many authors have developed different competing lists of various lengths [1], there is a general agreement on the core set of these factors [3]. On the other hand, very different conceptual and analytical models are proposed for describing how these factors exert their influence on the human error probability (HEP); indeed if a PSF has an effect on human performance it is crucial to account for how this influence comes about. One of the major challenges of modelling the influence of PSFs is how to represent and quantify the dependencies among PSFs [4]. Typically, HRA methods try to provide guidance as to how to treat dependencies at the level of the factor assessments; yet this guidance is hard to provide. In general, it is possible to recognise two types of dependency among PSFs (Fig. 1): – dependency between the states of the PSFs: the presence or the state of one PSF influences the state of another (e.g. a high level of stress increases the probability of low attention); – dependency between the influences (impacts) of the PSFs on the human performance: the state of one PSFs increases the influence (impact) of another PSF on the HEP without changing its state (e.g. a poor state of the PSF “team factors” affects the influence of “personal factor” on the HEP).Among HRA methods, which cope with dependency issues between PSFs, it is particularly worthy to cite the Information, Decision and Action in Crew Context model (IDAC) [5], the Cognitive Reliability Error Analysis Method (CREAM) [2], the Standardised Plant Analysis Risk-Human Reliability Analysis (SPAR-H) [6]. Some of them describe how the PSFs affect each other merely in a qualitative way (e.g. CREAM [2]), whereas some recent methods try to describe analytically the mutual dependencies among the states of PSFs and result in a very complex application that requires a great deal of effort by the analyst (e.g. IDAC [3]). Hallbert et al. [7] discusses how empirical data could be helpful for determining their size effect, their relative effects, as well as their interactions but they do not provide a procedure to guide the analysts on using these data. This paper deals with the development of a framework for modelling the mutual influences existing among PSFs and a related method to assess the importance of each PSF in influencing the performance of an operator, in a specific context, considering these interactions (Fig. 1B). Furthermore, the proposed model allows to continue to use linear weighting methods for modelling the functional relationship between HEP and related PSFs (e.g. SLIM [8]), thus keeping the computational model relatively simple. The paper is organised as follows. Section 2 summarises the state-of-the-art on modelling dependencies among PSFs. Section 3 introduces the theory of Analytic Network Process (ANP; [12], [13] and [14]), its use for assessing dependencies among PSFs, and describes the proposed method based on the integration of ANP and SLIM. In order to test its applicability, the method has been included in the cognitive simulator PROCOS [9], [10] and [11] and a pilot study in Air Traffic Control has been performed. By this way, using the same scenario and data reported in [11], the pilot study also returns a preliminary assessment of the variation of HEP estimates when a model of mutual dependent PSFs is used. Section 4 describes the pilot application, while Section 5 discusses the results. Finally, the last section summarises the main findings and the conclusions.

The concept of Performance shaping factor (or influencing factor) supports a simplified modelling of the interaction between the operator and the operational context. The assumption of independent PSFs has been frequently used in the past for the sake of simplicity of HEP quantification. Nevertheless, in order to better determine the effects of PSFs on the operator’s performance it is necessary to take into account their mutual dependencies, which encompass two different mechanisms: – dependency between the states of the PSFs; – dependency between the influences (impacts) of the PSFs on the HEP. To overcome this approximation, some models of dependent PSFs have been recently proposed in literature but the contribution is substantially qualitative. The paper introduced a model and a related method for the quantification of the influence of PSFs (weights) on HEP, able to integrate an assessment of dependencies between PSFs. The method, based on the ANP, exploits experts’ judgements and thus is largely subjective even though systematic. The proposed method and the framework for modelling dependent PSFs are quite general, while the elicitation of PSFs, the qualitative network of dependencies and the quantification of the weights are undoubtedly domain-dependent or case-dependent. The case study carried out in the Air Traffic Control domain demonstrated a significant modification of the influence of PSFs over the operator performance when dependencies are taken into account. No previous quantification of the relative contribution of the direct and indirect influence of a PSF on HEP has been proposed in literature. Some weaknesses have emerged during the development of this project as well. First of all, even though the consistency of the results has been demonstrated comparing them with the results coming from the study conducted by Leva et al. [11] on the same case study, the method would benefit from a more formal validation using direct observations or statistical analysis of incident reporting data. The qualitative network of dependencies between PSFs is identified by means of literature analysis and experts’ judgements and thus is affected by subjectivity. Finally, approaches to better identify the existing dependencies between the states of PSFs should be investigated in the view of a complete integration of PSF dependency analysis within the PROCOS framework. To this end, the capability of Bayesian Networks of extracting the network of states dependencies from real data is under investigation [27].