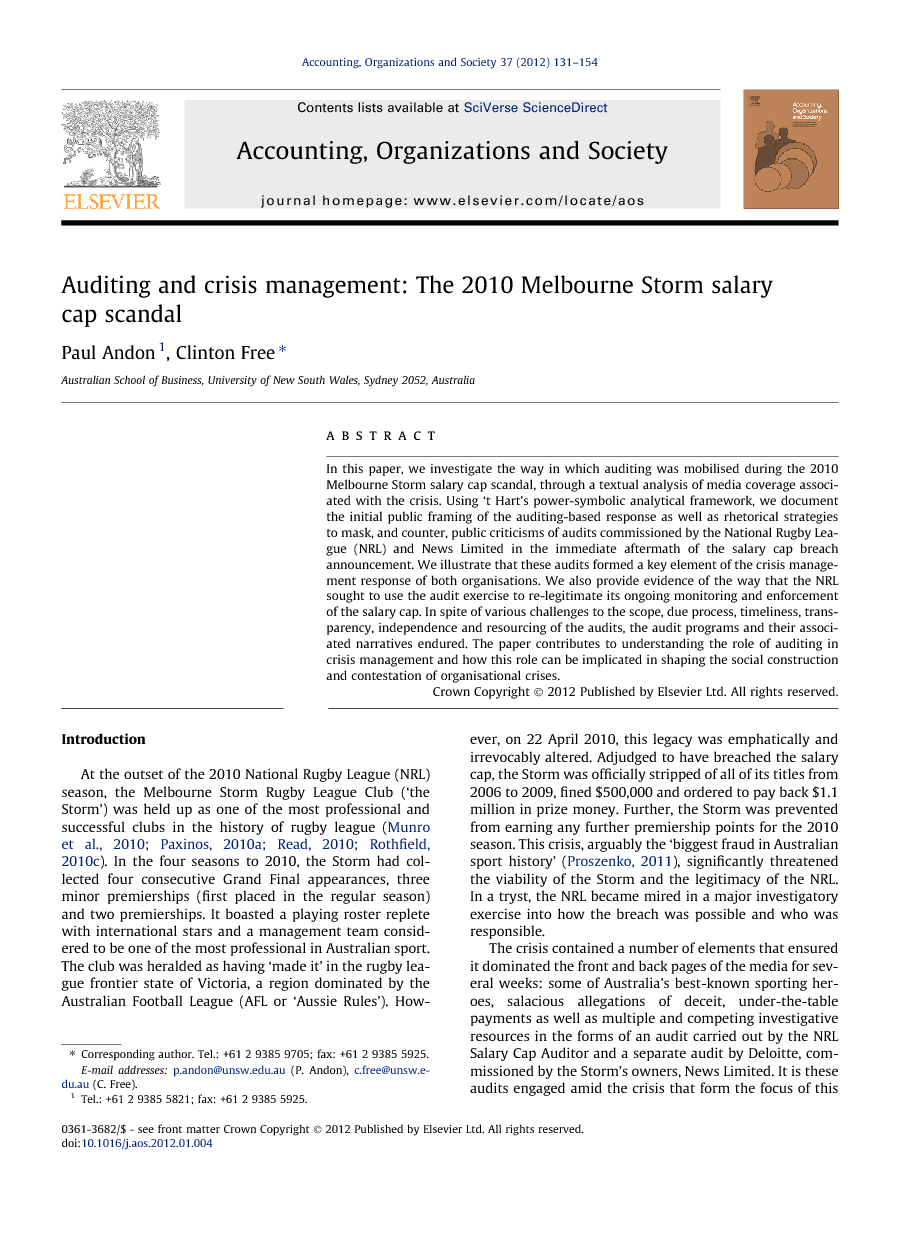 In this paper, we investigate the way in which auditing was mobilised during the 2010 Melbourne Storm salary cap scandal, through a textual analysis of media coverage associated with the crisis. Using ‘t Hart’s power-symbolic analytical framework, we document the initial public framing of the auditing-based response as well as rhetorical strategies to mask, and counter, public criticisms of audits commissioned by the National Rugby League (NRL) and News Limited in the immediate aftermath of the salary cap breach announcement. We illustrate that these audits formed a key element of the crisis management response of both organisations. We also provide evidence of the way that the NRL sought to use the audit exercise to re-legitimate its ongoing monitoring and enforcement of the salary cap. In spite of various challenges to the scope, due process, timeliness, transparency, independence and resourcing of the audits, the audit programs and their associated narratives endured. The paper contributes to understanding the role of auditing in crisis management and how this role can be implicated in shaping the social construction and contestation of organisational crises.

At the outset of the 2010 National Rugby League (NRL) season, the Melbourne Storm Rugby League Club (‘the Storm’) was held up as one of the most professional and successful clubs in the history of rugby league (Munro et al., 2010, Paxinos, 2010a, Read, 2010 and Rothfield, 2010c). In the four seasons to 2010, the Storm had collected four consecutive Grand Final appearances, three minor premierships (first placed in the regular season) and two premierships. It boasted a playing roster replete with international stars and a management team considered to be one of the most professional in Australian sport. The club was heralded as having ‘made it’ in the rugby league frontier state of Victoria, a region dominated by the Australian Football League (AFL or ‘Aussie Rules’). However, on 22 April 2010, this legacy was emphatically and irrevocably altered. Adjudged to have breached the salary cap, the Storm was officially stripped of all of its titles from 2006 to 2009, fined $500,000 and ordered to pay back $1.1 million in prize money. Further, the Storm was prevented from earning any further premiership points for the 2010 season. This crisis, arguably the ‘biggest fraud in Australian sport history’ (Proszenko, 2011), significantly threatened the viability of the Storm and the legitimacy of the NRL. In a tryst, the NRL became mired in a major investigatory exercise into how the breach was possible and who was responsible. The crisis contained a number of elements that ensured it dominated the front and back pages of the media for several weeks: some of Australia’s best-known sporting heroes, salacious allegations of deceit, under-the-table payments as well as multiple and competing investigative resources in the forms of an audit carried out by the NRL Salary Cap Auditor and a separate audit by Deloitte, commissioned by the Storm’s owners, News Limited. It is these audits engaged amid the crisis that form the focus of this paper. Specifically, this paper investigates the way that auditing can be drawn on during crisis. By focusing on media releases and public pronouncements of the implicated entities and mobilising the power-symbolic approach to analyses of crisis management developed by Paul ‘t Hart and colleagues (see, for example, Boin et al., 2009, Boin et al., 2005 and ‘t Hart, 1993), we show that audit can be positioned as an important crisis management ritual. In this instance, auditing was capitalised upon to conspicuously signal: (i) a commitment to resolving problems; (ii) enthusiasm for cleansing corrupt elements; (iii) transparency and probity in crisis responses; (iv) learning; and (v) closure to the crisis. Crisis, then, is a perceptual category that appears well suited to being addressed by the programmatic elements of auditing. However, the legitimating capacity of auditing in crisis situations is neither mechanical nor inevitable. In this case, the crisis opened the entire salary cap ‘system’ to critical evaluation, particularly with respect to its capacity to be effectively audited (i.e., monitored and enforced). In turn, numerous elements of the NRL and News Limited investigatory audits attracted staunch criticism, relating to issues of scope, due process, timeliness, transparency, conflicts of interest, and resourcing. When challenges such as these emerge, the credibility of auditing is impugned and auditing must be publicly bolstered and (re-)legitimated through a variety of tactics if it is to operate as intended. We document the tactics used in this case to diffuse emerging critiques of the audit-based crisis response, and trace the way that these played out in the public sphere. In sum, we show how auditing is centrally implicated in an ongoing, dynamic process of legitimisation, de-legitimisation, and re-legitimisation during times of crisis (‘t Hart, 1993). This article is structured as follows. The next section provides a review of relevant research in auditing and legitimacy as well as pertinent literature relating to crisis management. This is followed by an overview of the methods used in collecting and analysing the media data. After a review of the context of the crisis, we then analyse the mobilisation of auditing in the initial communications of key parties to the crisis, and how its contextual legitimacy was publicly debated as the crisis unfolded. The final sections summarise the major findings, consider the relationships between crisis, blame and auditor legitimacy, and conclude the paper.

In conclusion, this paper positions auditing as a distinct and important ritual in crisis management. This augments existing research that has considered the range of options available to organisations mired by perceptions of crisis. The mobilisation of audit as part of these communications, and the wide reporting of such references in the media, reflects the legitimating qualities of auditing as well as underlining the need for credibility if auditing is to have the legitimating effect that commissioning organisations are seeking. To place auditing within a game of crisis communications, the production of ‘comfort’ and renewed order, is to draw attention to Power’s work on the sociology of auditing, which suggests that it is “an emergent product of processes for creating order rather than the other way around” (Power, 1995, p. 329). This article also provides further empirical evidence of the ‘audit explosion’ and responds to calls for further research contemplating auditing and certification as a more generalisable activity (Francis, 2011 and Power, 2011). The role of salary cap auditing in the governance of the NRL emerged with relatively little fanfare, yet its prominence has escalated as a symbol of the league’s commitment to the principles of propriety, fair-play and equality. Following Carter and Jeacle (2011) and Jamal and Sunder (2011), the case presented in this paper also raises questions about how adaptations of audit logics in new spaces may transmogrify conventional auditing principles and procedures. For example, conventional notions of independence are challenged by the involvement and perceived importance of ‘insiders’ (e.g., NRL staff with wide connections) in the performance of salary cap auditing. This case also sheds new light on entities other than the audited organisations that can derive legitimacy from auditing work (e.g., the NRL, News Limited, and the salary cap ‘system’ in this case) building on the notion of derived legitimacy developed by Free et al. (2009). Of course, this paper is subject to important limitations. It draws only on published sources from a set of high circulation publications in New South Wales and Victoria and does not include important new social media sources. Further interview work could usefully elaborate on some of the rationales for action taken, however we believe that the media focus is warranted in this case given the concern with crisis management in public spaces. A number of implications and avenues for further research can also be drawn from the empirical data and analysis presented here. For instance, media coverage of the NRL audit casts the audit process as emergent, social and serendipitous, in sharp contrast to conventional techno-rational accounts of audit processes. Future research could usefully investigate the way in which audit procedures and processes emerge and are adapted to a new arena. In this sense, field research in emerging assurance markets has considerable potential to enrich a research literature dominated by experimental psychology and analytical economics.