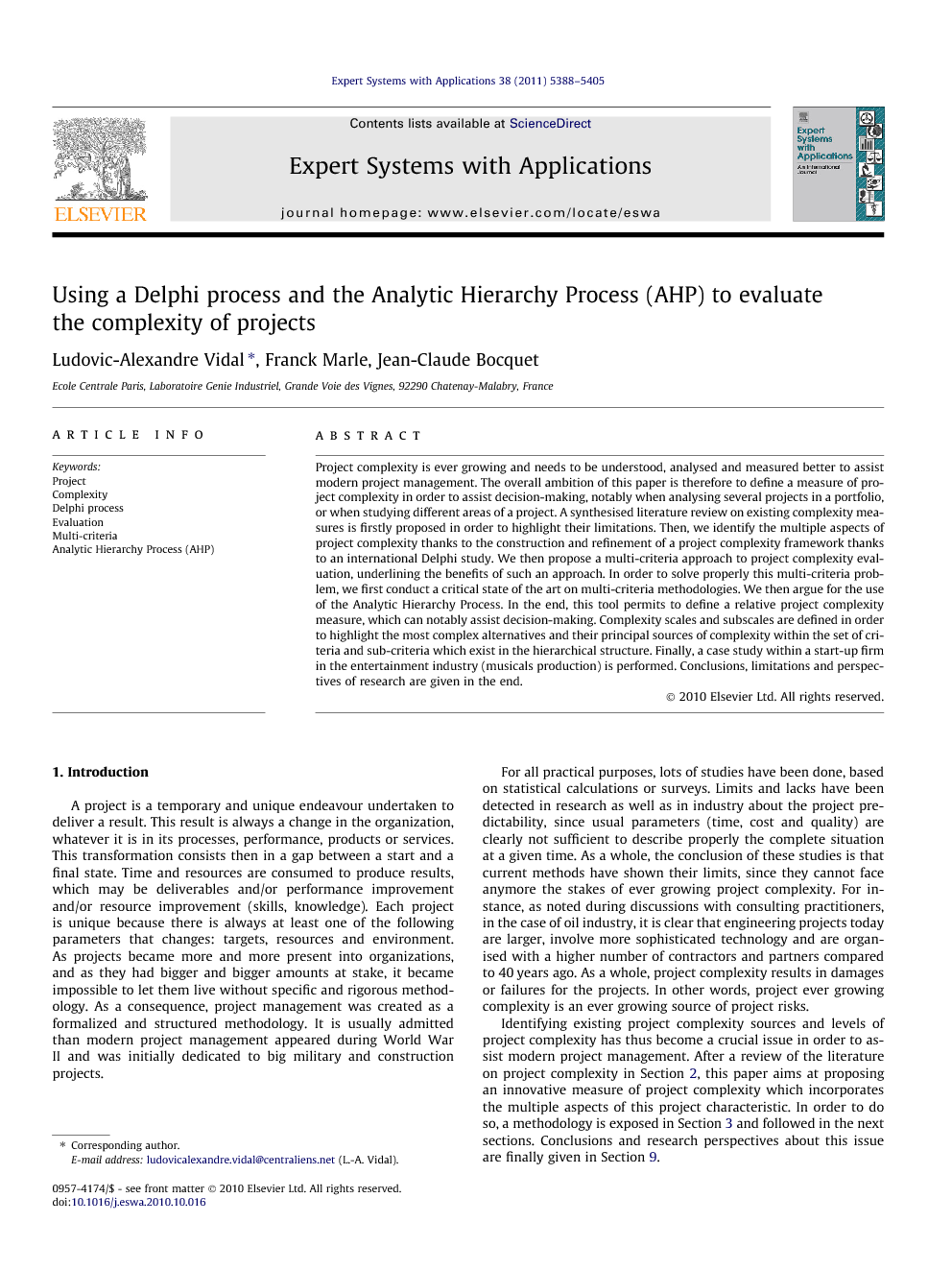 Project complexity is ever growing and needs to be understood, analysed and measured better to assist modern project management. The overall ambition of this paper is therefore to define a measure of project complexity in order to assist decision-making, notably when analysing several projects in a portfolio, or when studying different areas of a project. A synthesised literature review on existing complexity measures is firstly proposed in order to highlight their limitations. Then, we identify the multiple aspects of project complexity thanks to the construction and refinement of a project complexity framework thanks to an international Delphi study. We then propose a multi-criteria approach to project complexity evaluation, underlining the benefits of such an approach. In order to solve properly this multi-criteria problem, we first conduct a critical state of the art on multi-criteria methodologies. We then argue for the use of the Analytic Hierarchy Process. In the end, this tool permits to define a relative project complexity measure, which can notably assist decision-making. Complexity scales and subscales are defined in order to highlight the most complex alternatives and their principal sources of complexity within the set of criteria and sub-criteria which exist in the hierarchical structure. Finally, a case study within a start-up firm in the entertainment industry (musicals production) is performed. Conclusions, limitations and perspectives of research are given in the end.

A project is a temporary and unique endeavour undertaken to deliver a result. This result is always a change in the organization, whatever it is in its processes, performance, products or services. This transformation consists then in a gap between a start and a final state. Time and resources are consumed to produce results, which may be deliverables and/or performance improvement and/or resource improvement (skills, knowledge). Each project is unique because there is always at least one of the following parameters that changes: targets, resources and environment. As projects became more and more present into organizations, and as they had bigger and bigger amounts at stake, it became impossible to let them live without specific and rigorous methodology. As a consequence, project management was created as a formalized and structured methodology. It is usually admitted than modern project management appeared during World War II and was initially dedicated to big military and construction projects. For all practical purposes, lots of studies have been done, based on statistical calculations or surveys. Limits and lacks have been detected in research as well as in industry about the project predictability, since usual parameters (time, cost and quality) are clearly not sufficient to describe properly the complete situation at a given time. As a whole, the conclusion of these studies is that current methods have shown their limits, since they cannot face anymore the stakes of ever growing project complexity. For instance, as noted during discussions with consulting practitioners, in the case of oil industry, it is clear that engineering projects today are larger, involve more sophisticated technology and are organised with a higher number of contractors and partners compared to 40 years ago. As a whole, project complexity results in damages or failures for the projects. In other words, project ever growing complexity is an ever growing source of project risks. Identifying existing project complexity sources and levels of project complexity has thus become a crucial issue in order to assist modern project management. After a review of the literature on project complexity in Section 2, this paper aims at proposing an innovative measure of project complexity which incorporates the multiple aspects of this project characteristic. In order to do so, a methodology is exposed in Section 3 and followed in the next sections. Conclusions and research perspectives about this issue are finally given in Section 9.

As a whole, this paper elaborates an AHP-based methodology and measure to evaluate relative project complexity. The works proposed here answer the problem which was set after the literature review on existing (project) complexity measures. Indeed, as shown theoretically and validated with a first case study, the project complexity index proposed here permits to overcome to a great extent the limits of existing ones as it is: • Reliable, since the final users are confident with the results, measures and scales which are proposed. First, during the case study, no numerical result was ever challenged by the participants of the case study. On the contrary, the results permitted to identify more precisely project complexity sources which were consciously or unconsciously felt without being clearly mentioned or stated. Furthermore, the reliability of the results was also underlined when comparing with the a priori ranking which was made. The obtained results permitted to underline what they had forgotten in their a priori ranking and all the users agreed in the end on the ranking obtained by the complexity index proposed in this work. • Intuitive and user-friendly. The users understand the construction of the measure and scales, and why they do measure project complexity or the level of complexity regarding a given criterion, sub-criteria, or set of (sub-)criteria. This results in the end in a facilitation of communication on project complexity and project complexity factors. Finally, the measures and scales were easily computed and permitted rapid calculations and quick changes, which was an important requirement for an industrial use. • Globally independent of the project models which are used for project management. Indeed, no reference to project management tools or models (WBS, PERT networks, Gantt charts, risk lists, etc.) was ever made during the construction of the measure or during the case study. This means that none of these models is needed as a reference to assess project complexity through this method. However, a limitation exists on this point. The refined project complexity framework is the basis of the measure. But, one should not forget that this framework is in essence a specific model, not of a project, but of what project complexity stands for. As a consequence, the measure which is proposed refers theoretically to this project complexity model. However, the final user is free to add some aspects (project complexity factors) in the AHP hierarchical structure proposed in this study. The methodology which is proposed here is thus quite generic with the project complexity model used, as long as it can be modelled as a hierarchical structure of project complexity factors. • Able to highlight project complexity sources when building up the global complexity scale and the subscales. As shown by the case study, these scales enable the user to address many issues regarding decision-making and project complexity: ∘ Project prioritization within a portfolio in order to focus on the most complex projects (the ones where more complexity-related management methods and tools are needed). ∘ Project areas (for instance thanks to a classical WBS decomposition, or according to geographical areas) prioritization in order to focus on the most complex areas of a given project (the ones where more complexity-related management methods and tools are needed). ∘ Comparison of present projects with past projects. ∘ Project scenario prioritization in the case of mono-project management. ∘ One-to-one detailed comparison of two projects which exist in the same portfolio in terms of project complexity. ∘ Global identification of the principal project complexity sources within a given project/a given portfolio/any set of projects. However, some limitations do appear in this work and offer perspectives for future research on project complexity evaluation. • First, the Analytic Hierarchy Process has received some criticisms on the fact that rankings can vary when adding or subtracting an alternative to the set of alternatives on which the study is performed (Holder, 1990). We thus recommend the users to give specific attention to the step when the set of alternatives to be compared is selected. First, all alternatives in this set should strictly correspond to the final selection or comparison objective which is addressed. Second, projects on which the final users have few information or data may not be selected first as the quality of pair-wise comparisons may be considerably reduced. Finally, even with these recommendations, we need to underline that as for any decision-making process and tools, great caution and awareness should be taken when making the final decision (significant gaps should exist between scores and results may not be too sensitive). • Second, despite the sensitivity analyses which are proposed here, uncertainty in the judgment of the users is not much taken into account with this methodology. To address this issue, we plan to introduce a fuzzy AHP-based method with triangular fuzzy numbers in future research works. Such applications of this method in project management can notably be found in Mahmoodzadeh, Shahrabi, Pariazar, and Zaeri (2007). • Finally, future research is going to explore the possibility to extend this model to an ANP (Analytic Network Process) model. Indeed, Taslicali and Ercan (2006) say that their results suggest that “the ANP model represents reality as well as reliability better than the AHP model” due to the better integration of the interactions which exist between criteria. However, “the managerial implications of the execution of ANP and AHP are factors that vary from organization to organization”. The AHP seems to be an easier methodology which may be accepted and understood better by managers. We think that in our case, exploring the possibility of using the ANP may be interesting since in essence, the criteria and sub-criteria of our structure are not independent. Building up an ANP network structure for project complexity evaluation may then be interesting as it includes interdependence and feedback. However, the number of required judgement elicitations is likely to increase and become tougher when dealing with the interrelation between criteria or sub-criteria.