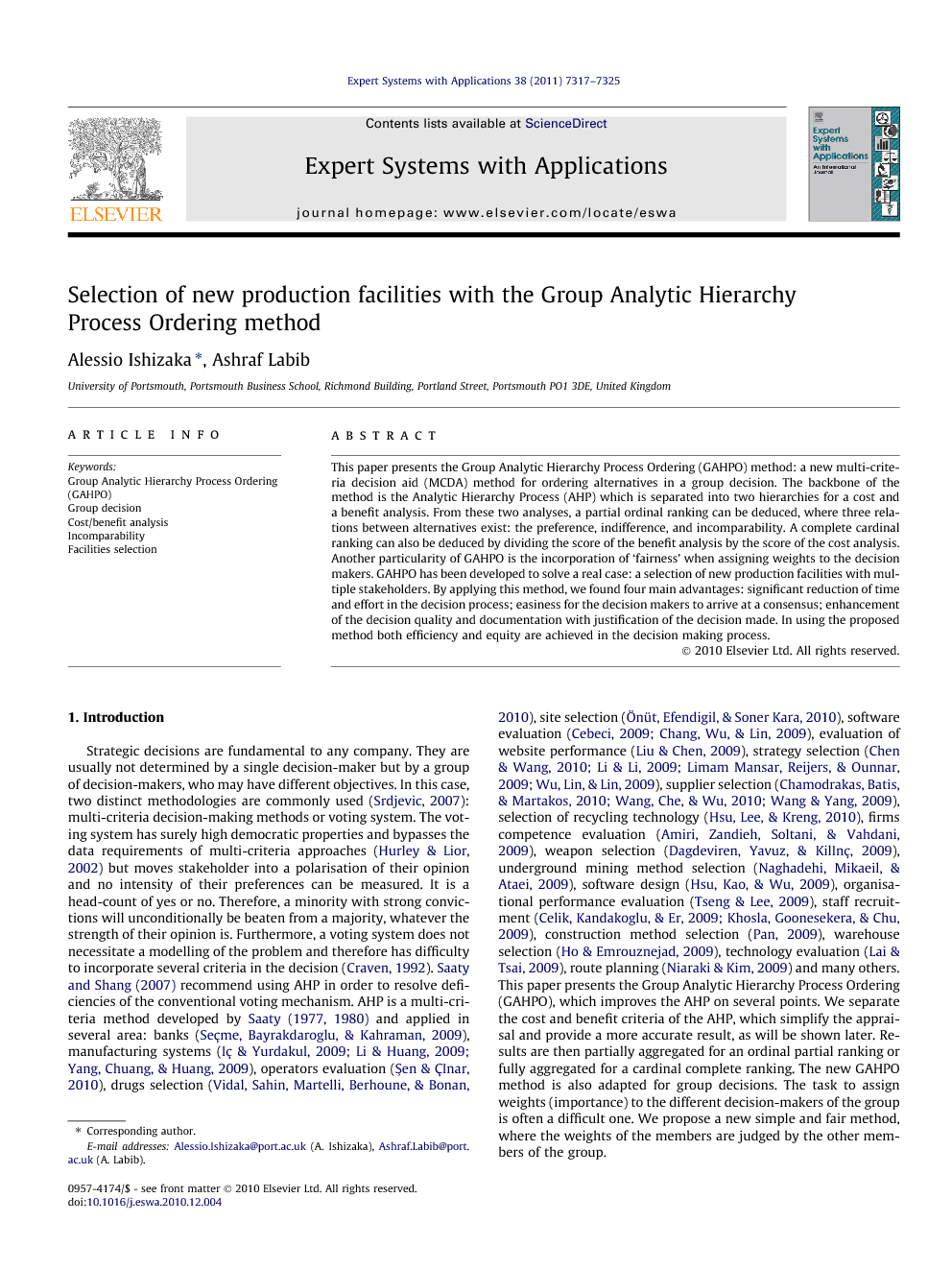 This paper presents the Group Analytic Hierarchy Process Ordering (GAHPO) method: a new multi-criteria decision aid (MCDA) method for ordering alternatives in a group decision. The backbone of the method is the Analytic Hierarchy Process (AHP) which is separated into two hierarchies for a cost and a benefit analysis. From these two analyses, a partial ordinal ranking can be deduced, where three relations between alternatives exist: the preference, indifference, and incomparability. A complete cardinal ranking can also be deduced by dividing the score of the benefit analysis by the score of the cost analysis. Another particularity of GAHPO is the incorporation of ‘fairness’ when assigning weights to the decision makers. GAHPO has been developed to solve a real case: a selection of new production facilities with multiple stakeholders. By applying this method, we found four main advantages: significant reduction of time and effort in the decision process; easiness for the decision makers to arrive at a consensus; enhancement of the decision quality and documentation with justification of the decision made. In using the proposed method both efficiency and equity are achieved in the decision making process.

Strategic decisions are fundamental to any company. They are usually not determined by a single decision-maker but by a group of decision-makers, who may have different objectives. In this case, two distinct methodologies are commonly used (Srdjevic, 2007): multi-criteria decision-making methods or voting system. The voting system has surely high democratic properties and bypasses the data requirements of multi-criteria approaches (Hurley & Lior, 2002) but moves stakeholder into a polarisation of their opinion and no intensity of their preferences can be measured. It is a head-count of yes or no. Therefore, a minority with strong convictions will unconditionally be beaten from a majority, whatever the strength of their opinion is. Furthermore, a voting system does not necessitate a modelling of the problem and therefore has difficulty to incorporate several criteria in the decision (Craven, 1992). Saaty and Shang (2007) recommend using AHP in order to resolve deficiencies of the conventional voting mechanism. AHP is a multi-criteria method developed by Saaty, 1977 and Saaty, 1980 and applied in several area: banks (Seçme, Bayrakdaroglu, & Kahraman, 2009), manufacturing systems (Iç and Yurdakul, 2009, Li and Huang, 2009 and Yang et al., 2009), operators evaluation (Şen & ÇInar, 2010), drugs selection (Vidal, Sahin, Martelli, Berhoune, & Bonan, 2010), site selection (Önüt, Efendigil, & Soner Kara, 2010), software evaluation (Cebeci, 2009 and Chang et al., 2009), evaluation of website performance (Liu & Chen, 2009), strategy selection (Chen and Wang, 2010, Li and Li, 2009, Limam Mansar et al., 2009 and Wu et al., 2009), supplier selection (Chamodrakas et al., 2010, Wang et al., 2010 and Wang and Yang, 2009), selection of recycling technology (Hsu, Lee, & Kreng, 2010), firms competence evaluation (Amiri, Zandieh, Soltani, & Vahdani, 2009), weapon selection (Dagdeviren, Yavuz, & KilInç, 2009), underground mining method selection (Naghadehi, Mikaeil, & Ataei, 2009), software design (Hsu, Kao, & Wu, 2009), organisational performance evaluation (Tseng & Lee, 2009), staff recruitment (Celik et al., 2009 and Khosla et al., 2009), construction method selection (Pan, 2009), warehouse selection (Ho & Emrouznejad, 2009), technology evaluation (Lai & Tsai, 2009), route planning (Niaraki & Kim, 2009) and many others. This paper presents the Group Analytic Hierarchy Process Ordering (GAHPO), which improves the AHP on several points. We separate the cost and benefit criteria of the AHP, which simplify the appraisal and provide a more accurate result, as will be shown later. Results are then partially aggregated for an ordinal partial ranking or fully aggregated for a cardinal complete ranking. The new GAHPO method is also adapted for group decisions. The task to assign weights (importance) to the different decision-makers of the group is often a difficult one. We propose a new simple and fair method, where the weights of the members are judged by the other members of the group. The paper starts with a literature review on the Analytic Hierarchy Process, followed by the description of the new proposed method and then finalised by an application of production facilities selection.

In this paper we have presented the GAHPO a new multi-criteria decision aid method developed to solve a real problem. The backbone of the method is the AHP with several improvements: – Cost and benefit criteria are separated in two hierarchies in order to simplify their comparisons. – Stakeholders are incorporated in the first level of the hierarchy in order to elicit a group preference. – The weight of each stakeholders are determined by others stakeholders. A consistency check is applied in order to verify the coherence of the comparisons given by the appraisers. A veto possibility is given to each evaluated stakeholder. – Two rankings exist: a partial ordinal ranking and a complete cardinal ranking. A partial ordinal ranking incorporates three possible relations: the preference, indifference and incomparability relation. The complete cardinal ranking fully aggregates the cost and benefit analysis. The result of the proposed methodology showed that out of the three strategies, Plant Automation was the most preferred alternative. All participants were completely satisfied from this robust result. However before the adoption, a traditional financial analysis (discounted cash flow) has been conducted in order to assess the profitability of the selected alternative. In fact, the cost-benefit analysis with the GAHPO ranks the alternatives but there is no guarantee that they will generate profits (Wedley et al., 2001). The first ranked alternative could be simply the one with the least loss. By applying the methodology as a cost-benefit analysis, four main benefits have been achieved by the decision makers: 1. Significant reduction of time and effort in the decision process due to a structured methodology. 2. Easiness for the decision makers to arrive at a consensus, because the hierarchy model brings a common reference, which can be debated. 3. Enhancement of the decision quality, due to the consistency check and sensitivity analysis embedded in the GAHPO method. 4. Documentation and justification of the decision made. The proposed GAHPO methodology could be easily applied to other strategic selection problems, where several stakeholders are involved.