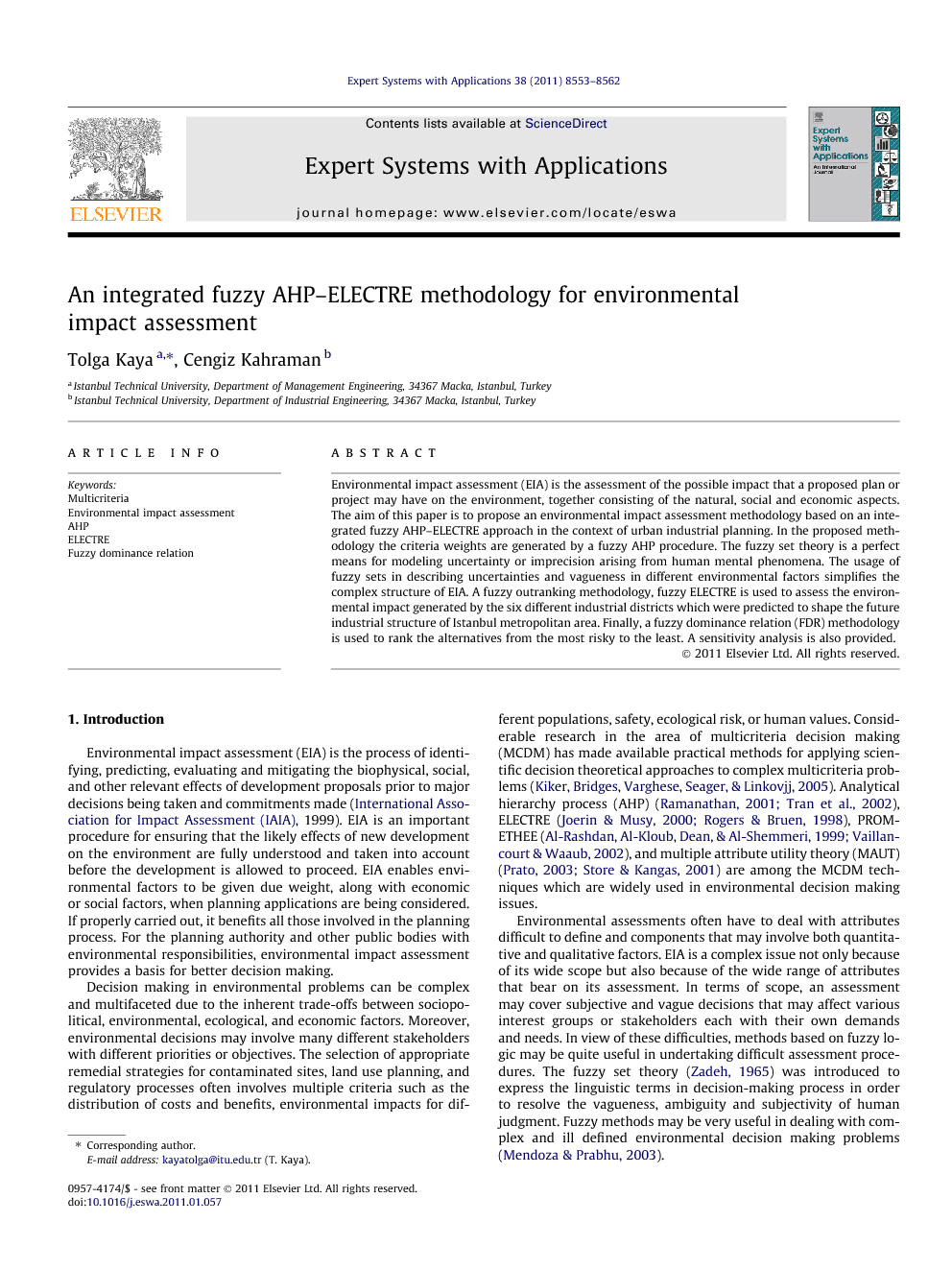 Environmental impact assessment (EIA) is the assessment of the possible impact that a proposed plan or project may have on the environment, together consisting of the natural, social and economic aspects. The aim of this paper is to propose an environmental impact assessment methodology based on an integrated fuzzy AHP–ELECTRE approach in the context of urban industrial planning. In the proposed methodology the criteria weights are generated by a fuzzy AHP procedure. The fuzzy set theory is a perfect means for modeling uncertainty or imprecision arising from human mental phenomena. The usage of fuzzy sets in describing uncertainties and vagueness in different environmental factors simplifies the complex structure of EIA. A fuzzy outranking methodology, fuzzy ELECTRE is used to assess the environmental impact generated by the six different industrial districts which were predicted to shape the future industrial structure of Istanbul metropolitan area. Finally, a fuzzy dominance relation (FDR) methodology is used to rank the alternatives from the most risky to the least. A sensitivity analysis is also provided.

Environmental impact assessment (EIA) is the process of identifying, predicting, evaluating and mitigating the biophysical, social, and other relevant effects of development proposals prior to major decisions being taken and commitments made (International Association for Impact Assessment (IAIA), 1999). EIA is an important procedure for ensuring that the likely effects of new development on the environment are fully understood and taken into account before the development is allowed to proceed. EIA enables environmental factors to be given due weight, along with economic or social factors, when planning applications are being considered. If properly carried out, it benefits all those involved in the planning process. For the planning authority and other public bodies with environmental responsibilities, environmental impact assessment provides a basis for better decision making. Decision making in environmental problems can be complex and multifaceted due to the inherent trade-offs between sociopolitical, environmental, ecological, and economic factors. Moreover, environmental decisions may involve many different stakeholders with different priorities or objectives. The selection of appropriate remedial strategies for contaminated sites, land use planning, and regulatory processes often involves multiple criteria such as the distribution of costs and benefits, environmental impacts for different populations, safety, ecological risk, or human values. Considerable research in the area of multicriteria decision making (MCDM) has made available practical methods for applying scientific decision theoretical approaches to complex multicriteria problems (Kiker, Bridges, Varghese, Seager, & Linkovjj, 2005). Analytical hierarchy process (AHP) (Ramanathan, 2001 and Tran et al., 2002), ELECTRE (Joerin and Musy, 2000 and Rogers and Bruen, 1998), PROMETHEE (Al-Rashdan et al., 1999 and Vaillancourt and Waaub, 2002), and multiple attribute utility theory (MAUT) (Prato, 2003 and Store and Kangas, 2001) are among the MCDM techniques which are widely used in environmental decision making issues. Environmental assessments often have to deal with attributes difficult to define and components that may involve both quantitative and qualitative factors. EIA is a complex issue not only because of its wide scope but also because of the wide range of attributes that bear on its assessment. In terms of scope, an assessment may cover subjective and vague decisions that may affect various interest groups or stakeholders each with their own demands and needs. In view of these difficulties, methods based on fuzzy logic may be quite useful in undertaking difficult assessment procedures. The fuzzy set theory (Zadeh, 1965) was introduced to express the linguistic terms in decision-making process in order to resolve the vagueness, ambiguity and subjectivity of human judgment. Fuzzy methods may be very useful in dealing with complex and ill defined environmental decision making problems (Mendoza & Prabhu, 2003). The ELECTRE method for choosing the best action from a given set of actions was devised in 1965. The acronym ELECTRE stands for “ELimination Et Choix Traduisant la REalite (ELimination and Choice Expressing the REality)”. ELECTRE is a well known MCDM method that has a history of successful real world applications. It has been applied in past to various types of decision-making situations. ELECTRE requires an input of criteria evaluations for the alternatives, called decision matrix, preference information, expressed as weights, thresholds, and other parameters (Sevkli, 2009). All the ELECTRE-type methods involve two major procedures: the modeling of preferences with outranking relations, followed by an exploitation procedure. The outranking relation of Ak → Al says that Ak outranks Al, if Ak is at least as good as Al on a majority of criteria and this result is not significantly based on any of the other criteria. ELECTRE methods can operate with one or several crispy or fuzzy outranking relations ( Roy, 1990, Benayoun et al., 1966, Montazer et al., 2009, Roy, 1985 and Shanian and Savadogo, 2006). In fuzzy ELECTRE, linguistic preferences can easily be converted to fuzzy numbers. For the determination of the relative importance of evaluation criteria, fuzzy AHP can be used since it is based on pairwise comparisons and allows the utilization of linguistic variables. From paired comparisons a relative scale of measurement is derived. Although the pairwise comparison approach is demanding in terms of solicited input from the experts, it offers maximum insight, particularly in terms of assessing consistency of the experts’ judgment. This technique is ideal for closer examination of a selected set of EIA criteria in urban industrial planning context. In this study, an integrated fuzzy AHP–ELECTRE methodology is proposed for EIA. In the proposed methodology, the weights of the assessment criteria are determined by a fuzzy AHP procedure. With the proposed methodology, six urban districts which were predicted to be among the developing industrial areas according to the Istanbul 2006 Metropolitan Plan will be evaluated in terms of EIA. Finally, using a fuzzy dominance relation (FDR) approach, the most risky industrial districts will be determined in order to provide a base for urban industrial rehabilitation strategies. The rest of the paper is organized as follows: In Section 2, a literature review about multiple attribute EIA is briefly given. In the third section, an integrated fuzzy AHP–ELECTRE methodology is presented. In Section 4, following the determination of the selection criteria and alternatives, the proposed methodology is applied to an urban industrial EIA problem. In Section 5, a sensitivity analysis is provided. Finally, in the last section, conclusions and suggestions for further study are given

Taking social, political, economical, and ecological factors into account simultaneously, EIA provides a basis for better decision making by identifying, predicting, evaluating the environmental effects of development schemes. If successfully carried out, it benefits all those involved in the planning process. Decision making in environmental problems can be complex due to varying measurements, differences in input parameters, lack of comparable exact data, and components that may involve subjective and qualitative factors. The concept of fuzzy sets is a way to deal with vague figures which often better represent the reality. The aim of this study was to propose an EIA methodology based on an integrated fuzzy approach in the context of urban industrial planning. In the proposed methodology the criteria weights are produced by a fuzzy AHP procedure. A fuzzy outranking methodology, fuzzy ELECTRE is used to assess the environmental impact generated by different urban industrial districts. Finally, a fuzzy dominance relation (FDR) methodology is used to rank the alternatives from the one with the highest impact to the lowest. Istanbul is the most industrialized and populated city of Turkey. The proposed methodology has been successfully applied to an industrial rehabilitation project prioritization case in Istanbul. Hadımköy, Hoşdere, and Orhanlı industrial regions are found to be the most risky districts among the areas which are subject to rehabilitation according to the Istanbul 2006 Metropolitan plan. Besides, sensitivity analysis showed that the ranking among the alternatives are highly sensitive to the changes in the weights of the evaluation criteria. In the future research, the proposed framework can be applied to assess the impact of industrial development plans conducted for different cities or regions. Moreover, similar studies can be conducted based on different fuzzy MCDM techniques such as fuzzy PROMETHEE, fuzzy VIKOR or fuzzy TOPSIS for comparative purposes.