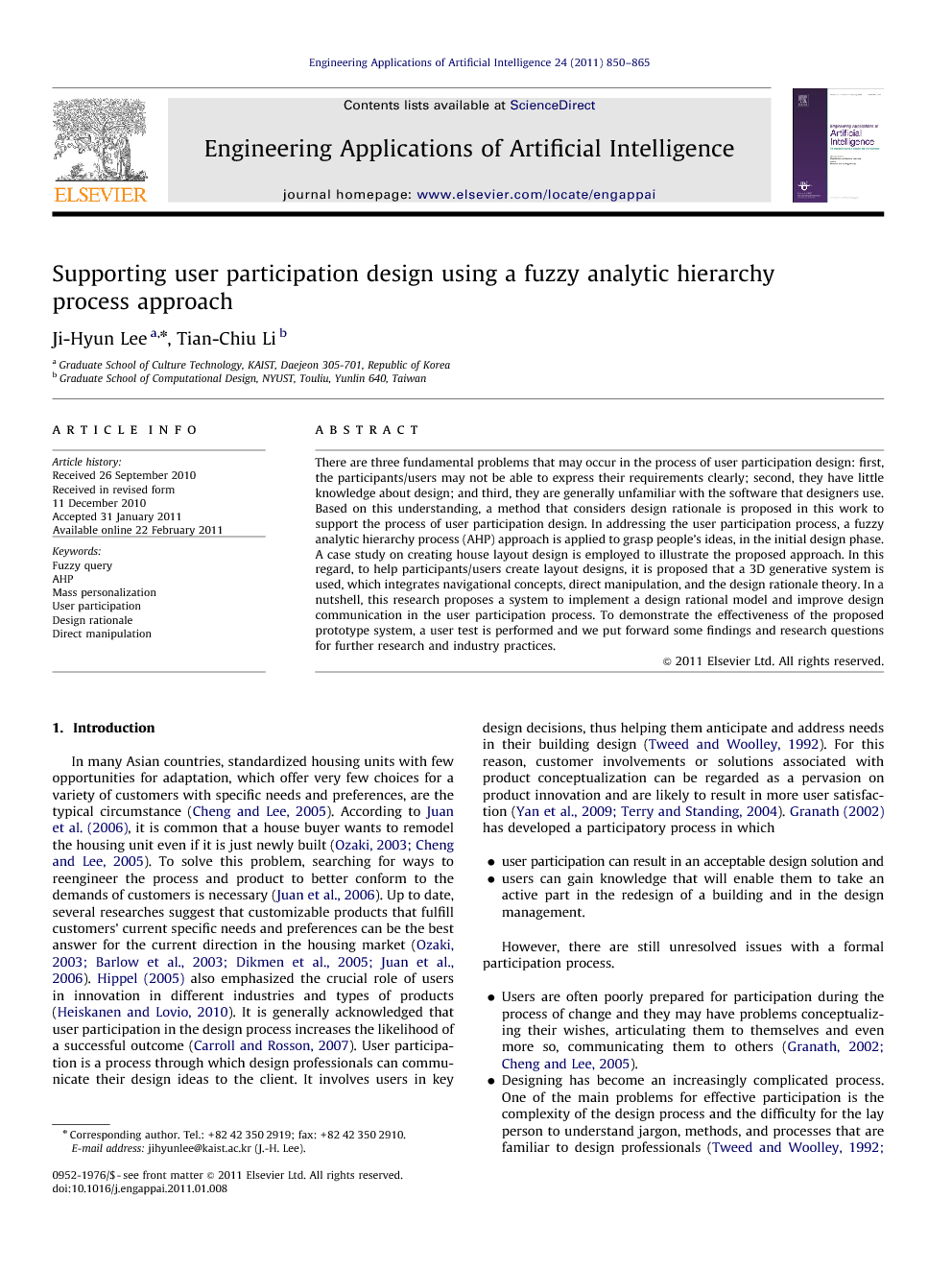 There are three fundamental problems that may occur in the process of user participation design: first, the participants/users may not be able to express their requirements clearly; second, they have little knowledge about design; and third, they are generally unfamiliar with the software that designers use. Based on this understanding, a method that considers design rationale is proposed in this work to support the process of user participation design. In addressing the user participation process, a fuzzy analytic hierarchy process (AHP) approach is applied to grasp people's ideas, in the initial design phase. A case study on creating house layout design is employed to illustrate the proposed approach. In this regard, to help participants/users create layout designs, it is proposed that a 3D generative system is used, which integrates navigational concepts, direct manipulation, and the design rationale theory. In a nutshell, this research proposes a system to implement a design rational model and improve design communication in the user participation process. To demonstrate the effectiveness of the proposed prototype system, a user test is performed and we put forward some findings and research questions for further research and industry practices.

In many Asian countries, standardized housing units with few opportunities for adaptation, which offer very few choices for a variety of customers with specific needs and preferences, are the typical circumstance (Cheng and Lee, 2005). According to Juan et al. (2006), it is common that a house buyer wants to remodel the housing unit even if it is just newly built (Ozaki, 2003 and Cheng and Lee, 2005). To solve this problem, searching for ways to reengineer the process and product to better conform to the demands of customers is necessary (Juan et al., 2006). Up to date, several researches suggest that customizable products that fulfill customers' current specific needs and preferences can be the best answer for the current direction in the housing market (Ozaki, 2003, Barlow et al., 2003, Dikmen et al., 2005 and Juan et al., 2006). Hippel (2005) also emphasized the crucial role of users in innovation in different industries and types of products (Heiskanen and Lovio, 2010). It is generally acknowledged that user participation in the design process increases the likelihood of a successful outcome (Carroll and Rosson, 2007). User participation is a process through which design professionals can communicate their design ideas to the client. It involves users in key design decisions, thus helping them anticipate and address needs in their building design (Tweed and Woolley, 1992). For this reason, customer involvements or solutions associated with product conceptualization can be regarded as a pervasion on product innovation and are likely to result in more user satisfaction (Yan et al., 2009 and Terry and Standing, 2004). Granath (2002) has developed a participatory process in which • user participation can result in an acceptable design solution and • users can gain knowledge that will enable them to take an active part in the redesign of a building and in the design management. However, there are still unresolved issues with a formal participation process. • Users are often poorly prepared for participation during the process of change and they may have problems conceptualizing their wishes, articulating them to themselves and even more so, communicating them to others (Granath, 2002 and Cheng and Lee, 2005). • Designing has become an increasingly complicated process. One of the main problems for effective participation is the complexity of the design process and the difficulty for the lay person to understand jargon, methods, and processes that are familiar to design professionals (Tweed and Woolley, 1992 and Heiskanen and Lovio, 2010). In other words, users lack relevant knowledge. • Building designs are typically beautifully packaged as rendered perspectives, elaborate layout drawings either hand drawn or produced by CAD. However, as users are generally novices when it comes to operating such tools, it compounds their difficulty in conceptualizing, articulating, and communicating their needs (Granath, 2002). This paper attempts to address these issues, that is, capturing users' vague needs and preferences, providing proper knowledge and intuitive interfaces to users, by using notions derived from Lee and Lai (1996) on design rationale (DR). Accordingly, we propose to develop an example that could be applied to design rationale in a real design participation process. An intelligent interior design system was developed, a knowledge-based model with a 3D direct manipulation interface, based on a fuzzy AHP computation. DR is important for a number of reasons, principally, because it includes both the reasons underlying design decisions as well as justifications. DR can assist in understanding design and, more particularly, in explaining why certain design alternatives are rejected. Concurrent with DR is the commonly accepted notion that, in any design process, the information space may be vast and users need to navigate it. Apart from navigation being essential, it is desirable that it should also be intuitive and interactive. To search and visualize the information space, knowledge tree are extremely effective. Direct manipulation can further help inexperienced designers; by interacting with design elements intuitively and iteratively, it may help in easily understanding design decisions. To do this, the methodology was divided into four parts. First, the thinking-aloud method was employed via a questionnaire to determine what a normal person's design needs could be, as well as the kinds of design preferences available. Second, the relationship between design needs and a vocabulary of used designs was established. This was important in interpreting how to apply the fuzzy AHP algorithm. Third, domain expert knowledge was collected for specifying inference rules, and to build the knowledge base. Fourth, an interface was developed, which used both direct manipulation and a knowledge tree to guide users to integrate into DR and to operate the system efficiently. After we describe a framework for DR, we demonstrate its use in a design process, and conclude with a description of the potential benefit of the paper. There are a number of factors to be considered in the actual client participation process; for house design these include elevation, material strength, even funding, etc. Such factors are beyond the scope of this paper. Instead, we concentrate on client participation, especially customization at the floor plan level in the conceptual design. More narrowly in this paper, we focus on kitchen layout.

This paper is the first attempt for housing customization domain to integrate the knowledge base to DR model and to implement the problems and solutions for user participation in the decision-making process of interior design in practice. The issues raised in this paper are as follows: • Integrated fuzzy AHP implementation of a design suggestion aid module to a knowledge-based module. We apply the fuzzy linguistic variable set to capture users' requirements represented by vague adjectives and to recommend interior design templates according to their preferences. This is an assumption that people often use uncertain adjectives to describe their design requirements. The questionnaire and thinking-aloud observations yielded supportive results, such as “People lack knowledge of how to design” and “People's short concentration period.” Our user test shows that it is solvable by our fuzzy AHP implementation and integrated it to knowledge-based module. • Merging two design rationale models, QOC and DRL. In this paper, we combine two design rationale models, QOC and DRL, to get the complement of one model and the other. We also refer to Dutoit and Paech (2002) to adopt their advanced concepts. However, ideally, a standardized DR model to apply in the real practice is necessary. The IEEE 1471–2000 standard is still under testing for architectural description to compare the entity and relationship representations of specific tools (Tang et al., 2010). • Knowledge module to help with design customization. There were a number of salient factors to be considered in interior design. Ordinary people do not have the ability to think like experts. Moreover, non-expert design may lack practicality. For this reason, this paper suggests that expert domain knowledge of interior design is integrated into the system. The knowledge module supports for an explanation and reasoning behind design decisions that respond to the users' current situations and provides the chance to customize from the template suggested by the system. • From mass customization to mass personalization. After two decades of its commencement, mass customization is now showing undoubted signs of moving into the mass personalization area (Kumar, 2007). Tseng et al. (2010) defines personalization as “to achieve satisfying each customer as an individual.” According to our operational scenario, user can get the benefit out of mass customization, represented by the Wizard. The user, however, still has a chance to make it personalized by designing from the chosen template. In addition to the four points, an intuitive interface for novices is used to provide a GUI 2D/3D interface for an interior design system. Even though it is shown to our user test that the GUI and intuitive-operation methods help the users to design easily without special education or training, it is still another substantial issue related to the HCI domain, which can be further improved in many respects. In a future version, the system would implement the same conceptual ideas but change the GUI to get more intuitive user interactions. In this paper, we focus on client participation in effective design, especially in personalization at the floor level of kitchen conceptual layout design. Even though, this paper has much more focused on mass customization, it can be expandable to fall into the mass personalization zone. We also claim that this system can be applied to all interior design space in a similar fashion.