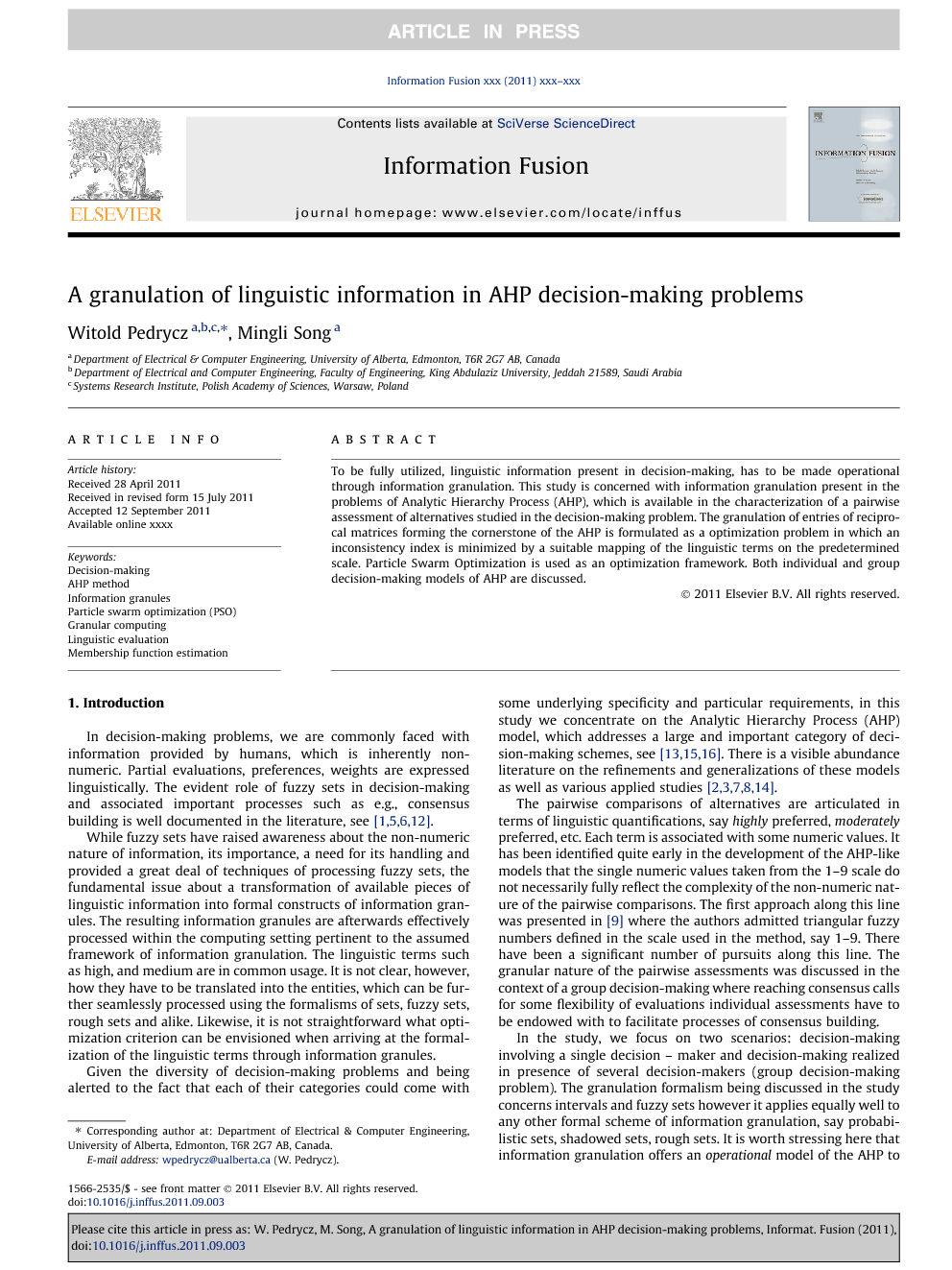 To be fully utilized, linguistic information present in decision-making, has to be made operational through information granulation. This study is concerned with information granulation present in the problems of Analytic Hierarchy Process (AHP), which is available in the characterization of a pairwise assessment of alternatives studied in the decision-making problem. The granulation of entries of reciprocal matrices forming the cornerstone of the AHP is formulated as a optimization problem in which an inconsistency index is minimized by a suitable mapping of the linguistic terms on the predetermined scale. Particle Swarm Optimization is used as an optimization framework. Both individual and group decision-making models of AHP are discussed.

In decision-making problems, we are commonly faced with information provided by humans, which is inherently non-numeric. Partial evaluations, preferences, weights are expressed linguistically. The evident role of fuzzy sets in decision-making and associated important processes such as e.g., consensus building is well documented in the literature, see [1], [5], [6] and [12]. While fuzzy sets have raised awareness about the non-numeric nature of information, its importance, a need for its handling and provided a great deal of techniques of processing fuzzy sets, the fundamental issue about a transformation of available pieces of linguistic information into formal constructs of information granules. The resulting information granules are afterwards effectively processed within the computing setting pertinent to the assumed framework of information granulation. The linguistic terms such as high, and medium are in common usage. It is not clear, however, how they have to be translated into the entities, which can be further seamlessly processed using the formalisms of sets, fuzzy sets, rough sets and alike. Likewise, it is not straightforward what optimization criterion can be envisioned when arriving at the formalization of the linguistic terms through information granules. Given the diversity of decision-making problems and being alerted to the fact that each of their categories could come with some underlying specificity and particular requirements, in this study we concentrate on the Analytic Hierarchy Process (AHP) model, which addresses a large and important category of decision-making schemes, see [13], [15] and [16]. There is a visible abundance literature on the refinements and generalizations of these models as well as various applied studies [2], [3], [7], [8] and [14]. The pairwise comparisons of alternatives are articulated in terms of linguistic quantifications, say highly preferred, moderately preferred, etc. Each term is associated with some numeric values. It has been identified quite early in the development of the AHP-like models that the single numeric values taken from the 1–9 scale do not necessarily fully reflect the complexity of the non-numeric nature of the pairwise comparisons. The first approach along this line was presented in [9] where the authors admitted triangular fuzzy numbers defined in the scale used in the method, say 1–9. There have been a significant number of pursuits along this line. The granular nature of the pairwise assessments was discussed in the context of a group decision-making where reaching consensus calls for some flexibility of evaluations individual assessments have to be endowed with to facilitate processes of consensus building. In the study, we focus on two scenarios: decision-making involving a single decision – maker and decision-making realized in presence of several decision-makers (group decision-making problem). The granulation formalism being discussed in the study concerns intervals and fuzzy sets however it applies equally well to any other formal scheme of information granulation, say probabilistic sets, shadowed sets, rough sets. It is worth stressing here that information granulation offers an operational model of the AHP to be used in presence of linguistic pairwise comparisons. The PSO framework supporting the formation of information granules helps translate linguistic quantification into meaningful information granules so that the highest consistency of the evaluations is achieved. The presentation is structured as follows. We start with a brief outline of the AHP decision model (Section 2). Section 3 is concerned with a quantification of linguistic terms present in reciprocal matrices where a granulation of the terms leads to the operational realization of further processing forming preference vectors. The optimization of the granulation process is elaborated on in Section 4. Both set-based and fuzzy set-oriented information granulation mechanisms are studied. Group decision-making in which a collection of reciprocal matrices is considered is covered in Section 5. Conclusions are drawn Section 6. The study comes with a series of numeric examples, which in a step-by-step manner offer an illustration of the presented ideas and the ensuing algorithms.

The study presented in this paper provided the methodology and the algorithmic framework of constructing preference vectors on a basis of reciprocal matrices with the linguistically quantified results of pairwise comparisons. It is important to underline that while linguistic information is readily available, it is not operational and thus the phase of information granulation becomes indispensible. The mapping of the linguistic assessments to the corresponding information granules makes the linguistic information operational so that the final preference values are determined. The formation of a suite of information granules realizing a linguistic (symbolic) quantification as a result of a given optimization problem equips these granules with well-articulated semantics. The use of PSO as an optimization environment offers a great deal of flexibility. Different fitness functions could be easily accommodated. Likewise a multiobjective optimization can be sought. The need for the two-objective optimization becomes apparent in case of a group decision-making where in addition to the criterion of consistency of evaluations applied to the individual reciprocal matrices, one can consider a minimization of dispersions among the vectors of preferences associated with these matrices. While we have predominantly focused our discussion on the granulation of linguistic terms in the language of intervals and fuzzy sets (to some extent), the discussed methodology applies equally well in case of other formalisms of information granules. In particular, dealing with probabilistically granulated linguistic terms could help shed light on possible linkages between probabilistic and fuzzy models of decision-making along with some possible hybrid probabilistic-fuzzy schemes.