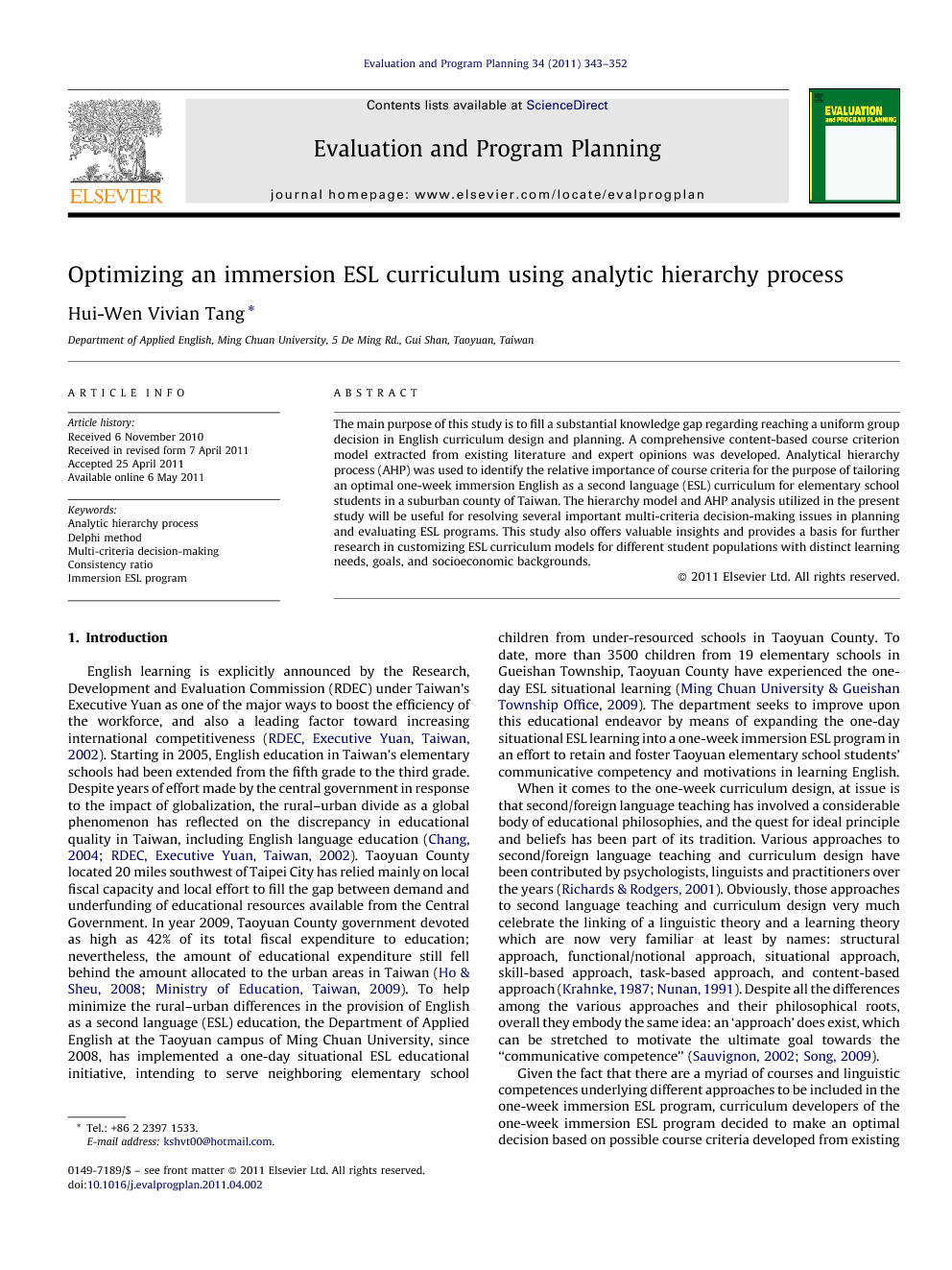 The main purpose of this study is to fill a substantial knowledge gap regarding reaching a uniform group decision in English curriculum design and planning. A comprehensive content-based course criterion model extracted from existing literature and expert opinions was developed. Analytical hierarchy process (AHP) was used to identify the relative importance of course criteria for the purpose of tailoring an optimal one-week immersion English as a second language (ESL) curriculum for elementary school students in a suburban county of Taiwan. The hierarchy model and AHP analysis utilized in the present study will be useful for resolving several important multi-criteria decision-making issues in planning and evaluating ESL programs. This study also offers valuable insights and provides a basis for further research in customizing ESL curriculum models for different student populations with distinct learning needs, goals, and socioeconomic backgrounds.

English learning is explicitly announced by the Research, Development and Evaluation Commission (RDEC) under Taiwan's Executive Yuan as one of the major ways to boost the efficiency of the workforce, and also a leading factor toward increasing international competitiveness (RDEC, Executive Yuan, Taiwan, 2002). Starting in 2005, English education in Taiwan's elementary schools had been extended from the fifth grade to the third grade. Despite years of effort made by the central government in response to the impact of globalization, the rural–urban divide as a global phenomenon has reflected on the discrepancy in educational quality in Taiwan, including English language education (Chang, 2004 and RDEC, 2009). Taoyuan County located 20 miles southwest of Taipei City has relied mainly on local fiscal capacity and local effort to fill the gap between demand and underfunding of educational resources available from the Central Government. In year 2009, Taoyuan County government devoted as high as 42% of its total fiscal expenditure to education; nevertheless, the amount of educational expenditure still fell behind the amount allocated to the urban areas in Taiwan (Ho and Sheu, 2008 and Ministry of Education, 2009). To help minimize the rural–urban differences in the provision of English as a second language (ESL) education, the Department of Applied English at the Taoyuan campus of Ming Chuan University, since 2008, has implemented a one-day situational ESL educational initiative, intending to serve neighboring elementary school children from under-resourced schools in Taoyuan County. To date, more than 3500 children from 19 elementary schools in Gueishan Township, Taoyuan County have experienced the one-day ESL situational learning (Ming Chuan University & Gueishan Township Office, 2009). The department seeks to improve upon this educational endeavor by means of expanding the one-day situational ESL learning into a one-week immersion ESL program in an effort to retain and foster Taoyuan elementary school students’ communicative competency and motivations in learning English. When it comes to the one-week curriculum design, at issue is that second/foreign language teaching has involved a considerable body of educational philosophies, and the quest for ideal principle and beliefs has been part of its tradition. Various approaches to second/foreign language teaching and curriculum design have been contributed by psychologists, linguists and practitioners over the years (Richards & Rodgers, 2001). Obviously, those approaches to second language teaching and curriculum design very much celebrate the linking of a linguistic theory and a learning theory which are now very familiar at least by names: structural approach, functional/notional approach, situational approach, skill-based approach, task-based approach, and content-based approach (Krahnke, 1987 and Nunan, 1991). Despite all the differences among the various approaches and their philosophical roots, overall they embody the same idea: an ‘approach’ does exist, which can be stretched to motivate the ultimate goal towards the “communicative competence” (Sauvignon, 2002 and Song, 2009). Given the fact that there are a myriad of courses and linguistic competences underlying different approaches to be included in the one-week immersion ESL program, curriculum developers of the one-week immersion ESL program decided to make an optimal decision based on possible course criteria developed from existing literature. Since the importance attached to an immersion ESL curriculum differs between learning contexts, between institutions and between individuals, questions would arise concerning how to develop an optimal immersion ESL program for a specific group of elementary school students. The purpose of the study, therefore, was to develop a comprehensive course criterion model based on existing literature and expert opinions for decision making about an optimal immersion ESL program. The modified Delphi method and Analytical Hierarchy Process (AHP) were then adopted to identify the relative importance of criteria for selecting seven courses as a daily routine in the optimal one-week immersion ESL curriculum for a specific group of elementary school students in Taoyuan County.

The present research study was directed toward filling a substantial knowledge gap concerning reaching uniform group decisions in designing and planning an ESL immersion curriculum for elementary school students in Taoyuan, Taiwan. The research findings would be useful for resolving several important theoretical multi-criteria measurement issues and for the practical purpose of prioritizing learning needs. The specific aims of the study were to: 1. Validate the decision-making hierarchy for AHP analysis based on modified Delphi method. 2. Solicit the consistency ratio resulting from the pairwise comparison judgments. 3. Determine the course priorities by weighting criteria using AHP analysis. 4. Generate an optimal immersion ESL program by selecting the seven courses with the highest priorities. The results of the AHP analysis identified the following seven high priority courses to be included in the optimal one-week immersion ESL program: “Dining (US restaurants)”, “Traveling/Accommodation”, “Cultural Context”, “Shopping”, “Social Context”, “Entertainment/Amusement”, and “Music”. The Situational Approach is considered the most favorable approach; among the seven selected courses, four courses, namely “Dining”, “Traveling/Accommodation”, “Shopping”, and “Entertainment/Amusement” were drawn from the Situational Approach. “Cultural Context” and “Social Context” under the Functional/Notional Approach also received high priorities. The course “Music” based on the Topical/Informational Approach also received high priority. Based on the 9 ESL experts’ judgments, the Structural Approach was probably not significant in enhancing students’ learning motivation and communicative competency. Methodologically, the process of structuring AHP hierarchy in the present study provided opportunities to adequately consider all theoretically sound possibilities involved in the evaluation process of prioritizing an immersion ESL curriculum. Using the AHP, the complexity of varying ESL approaches and a myriad of courses associating with different approaches are decomposed into a comprehensive criteria model based on which decisions made could result from adequately considering all possible approaches and courses extracted from literature reviewed. While the present study revealed methodological implications for research, it also provided the following implications for practices and further research studies.