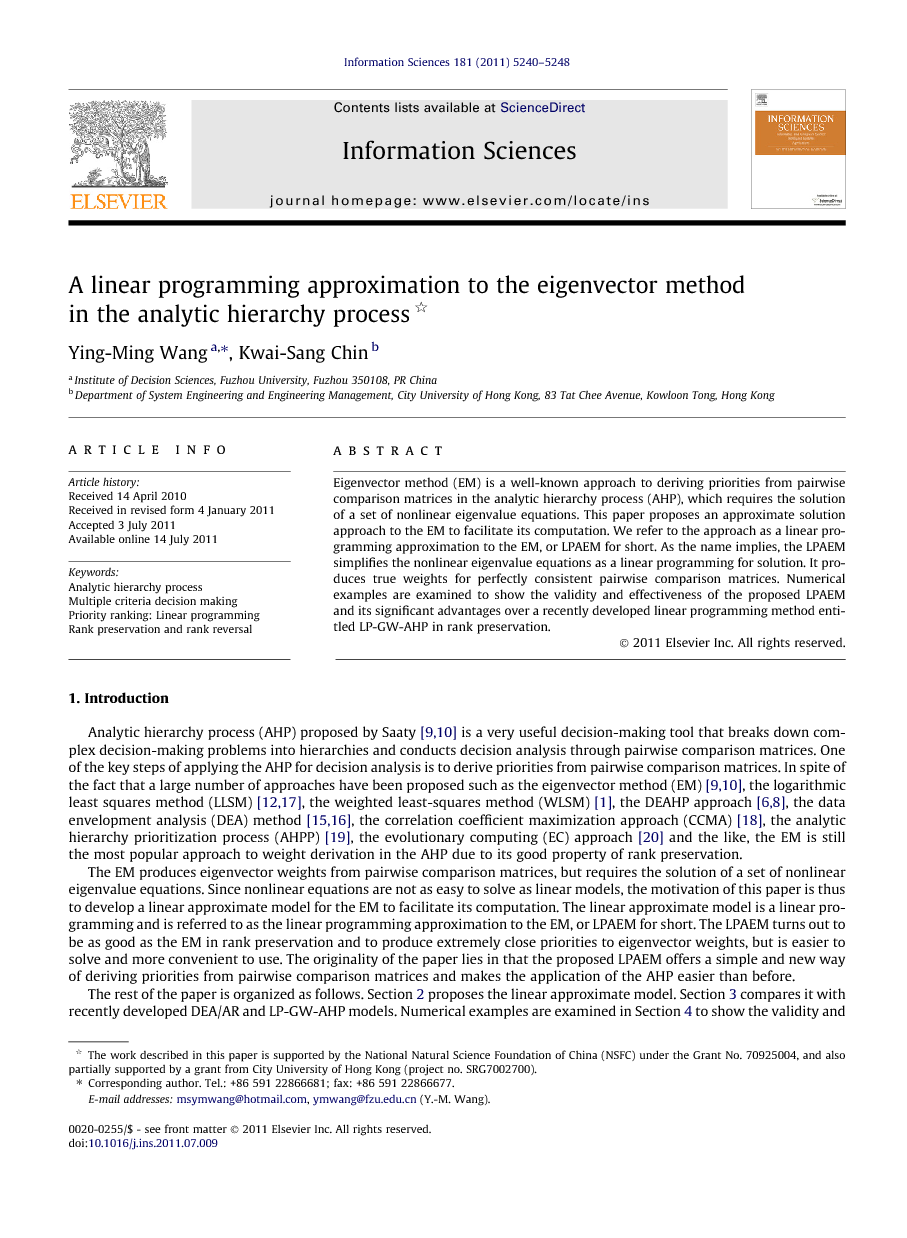 Eigenvector method (EM) is a well-known approach to deriving priorities from pairwise comparison matrices in the analytic hierarchy process (AHP), which requires the solution of a set of nonlinear eigenvalue equations. This paper proposes an approximate solution approach to the EM to facilitate its computation. We refer to the approach as a linear programming approximation to the EM, or LPAEM for short. As the name implies, the LPAEM simplifies the nonlinear eigenvalue equations as a linear programming for solution. It produces true weights for perfectly consistent pairwise comparison matrices. Numerical examples are examined to show the validity and effectiveness of the proposed LPAEM and its significant advantages over a recently developed linear programming method entitled LP-GW-AHP in rank preservation.

Analytic hierarchy process (AHP) proposed by Saaty [9] and [10] is a very useful decision-making tool that breaks down complex decision-making problems into hierarchies and conducts decision analysis through pairwise comparison matrices. One of the key steps of applying the AHP for decision analysis is to derive priorities from pairwise comparison matrices. In spite of the fact that a large number of approaches have been proposed such as the eigenvector method (EM) [9] and [10], the logarithmic least squares method (LLSM) [12] and [17], the weighted least-squares method (WLSM) [1], the DEAHP approach [6] and [8], the data envelopment analysis (DEA) method [15] and [16], the correlation coefficient maximization approach (CCMA) [18], the analytic hierarchy prioritization process (AHPP) [19], the evolutionary computing (EC) approach [20] and the like, the EM is still the most popular approach to weight derivation in the AHP due to its good property of rank preservation. The EM produces eigenvector weights from pairwise comparison matrices, but requires the solution of a set of nonlinear eigenvalue equations. Since nonlinear equations are not as easy to solve as linear models, the motivation of this paper is thus to develop a linear approximate model for the EM to facilitate its computation. The linear approximate model is a linear programming and is referred to as the linear programming approximation to the EM, or LPAEM for short. The LPAEM turns out to be as good as the EM in rank preservation and to produce extremely close priorities to eigenvector weights, but is easier to solve and more convenient to use. The originality of the paper lies in that the proposed LPAEM offers a simple and new way of deriving priorities from pairwise comparison matrices and makes the application of the AHP easier than before. The rest of the paper is organized as follows. Section 2 proposes the linear approximate model. Section 3 compares it with recently developed DEA/AR and LP-GW-AHP models. Numerical examples are examined in Section 4 to show the validity and effectiveness of the proposed linear approximate model and its significant advantages over the LP-GW-AHP model in rank preservation. Section 5 concludes the paper.

As an important multiple criteria decision-making tool, AHP has been applied in a wide variety of areas such as manufacturing, environmental management, agriculture, healthcare, education, logistics, e-business, information technology (IT), marketing, auditing, transportation, construction industry and the like [2], [4], [7], [13] and [14]. The use of AHP for multiple criteria decision making requires scientific methodologies for weight derivation from pairwise comparison matrices. Although the eigenvector method has been universally accepted as the best procedure for AHP weight derivation, it requires the solution of a set of nonlinear eigenvalue equations, which is somewhat complicated and inconvenient for use. To address this issue, we have proposed an approximate solution approach, called LPAEM, to facilitate the computation of the eigenvector method. The LPAEM simplifies a set of nonlinear eigenvalue equations as a linear programming model for solution and offers a new way for weight derivation in the AHP. It has been proved that the LPAEM produces true weights for perfectly consistent pairwise comparison matrices. For inconsistent pairwise comparison matrices, its validity and effectiveness have been illustrated with two numerical examples. The results have clearly shown the good property of the LPAEM and its significant advantages over a recently developed LP-GW-AHP model in rank preservation. The LPAEM has then been applied to the recruitment of a senior research fellow in a prestigious university. Application results have confirmed again that the LPAEM performs as well as the eigenvector method in rank preservation, but requires less computational effort for weight derivation. It is therefore hoped that the LPAEM can play a significant role in future AHP research and applications such as supplier selection, supply chain evaluation, system selection, risk assessment, project evaluation, portfolio selection, and so on.