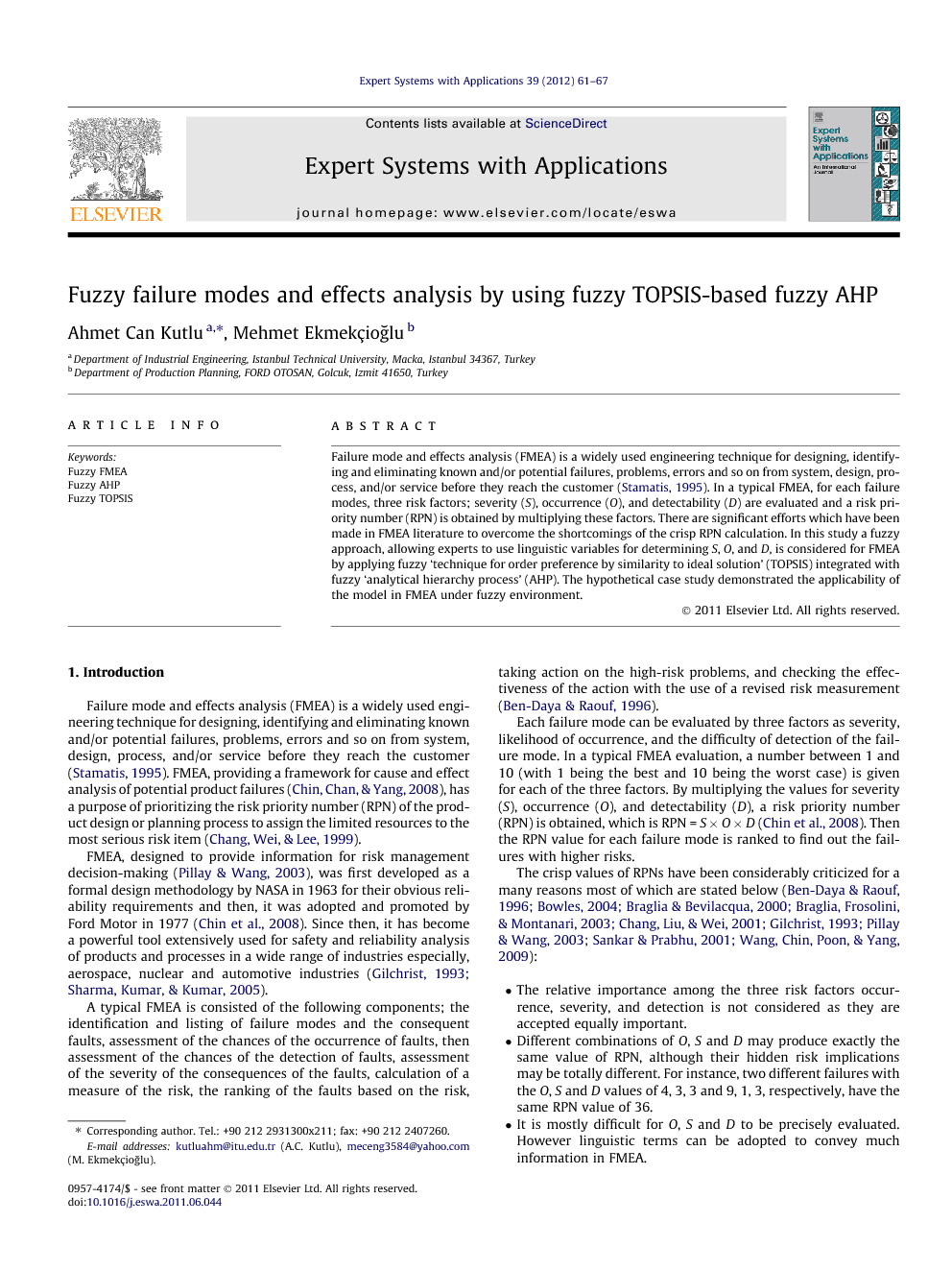 Failure mode and effects analysis (FMEA) is a widely used engineering technique for designing, identifying and eliminating known and/or potential failures, problems, errors and so on from system, design, process, and/or service before they reach the customer (Stamatis, 1995). In a typical FMEA, for each failure modes, three risk factors; severity (S), occurrence (O), and detectability (D) are evaluated and a risk priority number (RPN) is obtained by multiplying these factors. There are significant efforts which have been made in FMEA literature to overcome the shortcomings of the crisp RPN calculation. In this study a fuzzy approach, allowing experts to use linguistic variables for determining S, O, and D, is considered for FMEA by applying fuzzy ‘technique for order preference by similarity to ideal solution’ (TOPSIS) integrated with fuzzy ‘analytical hierarchy process’ (AHP). The hypothetical case study demonstrated the applicability of the model in FMEA under fuzzy environment.

Failure mode and effects analysis (FMEA) is a widely used engineering technique for designing, identifying and eliminating known and/or potential failures, problems, errors and so on from system, design, process, and/or service before they reach the customer (Stamatis, 1995). FMEA, providing a framework for cause and effect analysis of potential product failures (Chin, Chan, & Yang, 2008), has a purpose of prioritizing the risk priority number (RPN) of the product design or planning process to assign the limited resources to the most serious risk item (Chang, Wei, & Lee, 1999). FMEA, designed to provide information for risk management decision-making (Pillay & Wang, 2003), was first developed as a formal design methodology by NASA in 1963 for their obvious reliability requirements and then, it was adopted and promoted by Ford Motor in 1977 (Chin et al., 2008). Since then, it has become a powerful tool extensively used for safety and reliability analysis of products and processes in a wide range of industries especially, aerospace, nuclear and automotive industries (Gilchrist, 1993 and Sharma et al., 2005). A typical FMEA is consisted of the following components; the identification and listing of failure modes and the consequent faults, assessment of the chances of the occurrence of faults, then assessment of the chances of the detection of faults, assessment of the severity of the consequences of the faults, calculation of a measure of the risk, the ranking of the faults based on the risk, taking action on the high-risk problems, and checking the effectiveness of the action with the use of a revised risk measurement (Ben-Daya & Raouf, 1996). Each failure mode can be evaluated by three factors as severity, likelihood of occurrence, and the difficulty of detection of the failure mode. In a typical FMEA evaluation, a number between 1 and 10 (with 1 being the best and 10 being the worst case) is given for each of the three factors. By multiplying the values for severity (S), occurrence (O), and detectability (D), a risk priority number (RPN) is obtained, which is RPN = S × O × D (Chin et al., 2008). Then the RPN value for each failure mode is ranked to find out the failures with higher risks. The crisp values of RPNs have been considerably criticized for a many reasons most of which are stated below (Ben-Daya and Raouf, 1996, Bowles, 2004, Braglia and Bevilacqua, 2000, Braglia et al., 2003, Chang et al., 2001, Gilchrist, 1993, Pillay and Wang, 2003, Sankar and Prabhu, 2001 and Wang et al., 2009): • The relative importance among the three risk factors occurrence, severity, and detection is not considered as they are accepted equally important. • Different combinations of O, S and D may produce exactly the same value of RPN, although their hidden risk implications may be totally different. For instance, two different failures with the O, S and D values of 4, 3, 3 and 9, 1, 3, respectively, have the same RPN value of 36. • It is mostly difficult for O, S and D to be precisely evaluated. However linguistic terms can be adopted to convey much information in FMEA. • The use of multiplication method in the calculation of RPN is questionable and strongly sensitive to variations in criticality factor evaluations. When the traditional FMEA and the fuzzy approach are compared, the fuzzy approach has an advantage of allowing the conduction of risk evaluation and prioritization based on the knowledge of the experts (Tay & Lim, 2006). Xu, Tang, Xie, Ho, and Zhu (2002) state the reasons for considering the fuzzy logic approach as following: • All FMEA-related information is taken in natural language which is easy and plausible for fuzzy logic to deal with as it is based on human language and can be built on top of the experience of experts. • Fuzzy logic allows imprecise data usage so it enables the treatment of many states. Furthermore, fuzzy FMEA allows both quantitative data and vague and qualitative information to be used and managed in a consistent manner and makes it possible for the combination of severity, occurrence and detectability in a more flexible structure (Bowles and Pelaez, 1995 and Braglia et al., 2003). In this study firstly, a fuzzy approach, allowing experts to use linguistic variables for determining S, O, and D, is considered for FMEA by applying fuzzy TOPSIS integrated with fuzzy AHP. First Chang’s (1996) fuzzy AHP is utilized to determine the weight vector of three risk factors; severity, occurrence and detectability. Then by using the linguistic scores of risk factors for each failure modes, and the weight vector of risk factors, Chen’s (2000) fuzzy TOPSIS is utilized. According to the results most important failure modes are obtained. This model allowing the use of different importance weights for the risk factors (S, O, D) in fuzzy TOPSIS for scoring and ranking of the potential failure modes, can be taken as a contribution in the fuzzy FMEA literature. The rest of the paper is organized as follows: In Section 2, Literature Reviews of fuzzy FMEA, fuzzy AHP and fuzzy TOPSIS are expressed. In Section 3, a fuzzy multi-criteria method, an integration of fuzzy AHP and fuzzy TOPSIS, is proposed for fuzzy FMEA. In Section 4, the proposed methodology is applied to an assembly process with 8 potential failure modes at a manufacturing facility. A sensitivity analysis is also realized. Finally, conclusions are given.

FMEA, designed to provide information for risk management decision-making, is a widely used engineering technique in industries. In FMEA potential failure modes are determined and can be evaluated by risk factors named severity, occurrence, and detection. In a typical FMEA, the risk priority number of each failure mode is obtained by the multiplication of crisp values of the risk factors. However, in the literature the crisp values of RPNs have been considerably criticized for a many reasons such as ignoring relative importance among the risk factors, imprecisely evaluation, questionable multiplication procedure and obtaining RPN values not big enough with two factors with very low risk value but a factor highly risky. Due to the criticisms for RPN calculation in literature, a fuzzy approach is considered for FMEA analysis by its superiority over the traditional approach. In this study, fuzzy TOPSIS based FAHP is utilized to get the scores of PFMs, which are ranked to prioritize the failure modes. The results are used to find out the most important and risky PFM that would be handled at first glance. In the literature most of the studies consider fuzzy rule based systems for fuzzy FMEA whereas this study applies a model of fuzzy TOPSIS integrated with FAHP. In addition to allowing experts to evaluate the risk factors of each potential failure mode in linguistic variables, the advantage of using this model considers the importance of the risk factors. As a managerial implication the proposed model can be applied to any case for providing information for risk management decision-making in industrial and service organizations. For further research, the results of our study can be compared with that of other fuzzy multi-criteria techniques like fuzzy ELECTRE, fuzzy PROMETHEE, or fuzzy VIKOR.