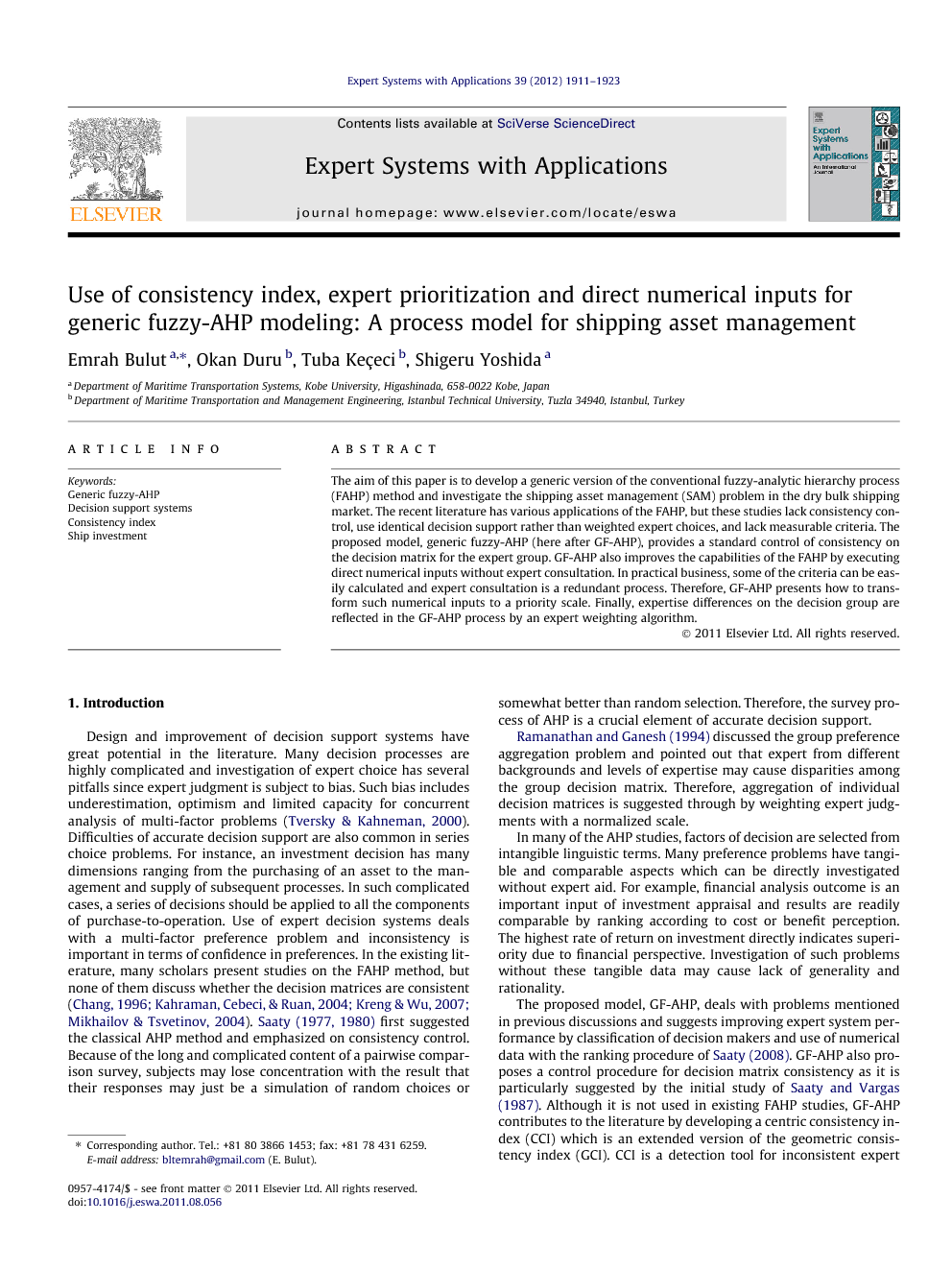 The aim of this paper is to develop a generic version of the conventional fuzzy-analytic hierarchy process (FAHP) method and investigate the shipping asset management (SAM) problem in the dry bulk shipping market. The recent literature has various applications of the FAHP, but these studies lack consistency control, use identical decision support rather than weighted expert choices, and lack measurable criteria. The proposed model, generic fuzzy-AHP (here after GF-AHP), provides a standard control of consistency on the decision matrix for the expert group. GF-AHP also improves the capabilities of the FAHP by executing direct numerical inputs without expert consultation. In practical business, some of the criteria can be easily calculated and expert consultation is a redundant process. Therefore, GF-AHP presents how to transform such numerical inputs to a priority scale. Finally, expertise differences on the decision group are reflected in the GF-AHP process by an expert weighting algorithm.

Design and improvement of decision support systems have great potential in the literature. Many decision processes are highly complicated and investigation of expert choice has several pitfalls since expert judgment is subject to bias. Such bias includes underestimation, optimism and limited capacity for concurrent analysis of multi-factor problems (Tversky & Kahneman, 2000). Difficulties of accurate decision support are also common in series choice problems. For instance, an investment decision has many dimensions ranging from the purchasing of an asset to the management and supply of subsequent processes. In such complicated cases, a series of decisions should be applied to all the components of purchase-to-operation. Use of expert decision systems deals with a multi-factor preference problem and inconsistency is important in terms of confidence in preferences. In the existing literature, many scholars present studies on the FAHP method, but none of them discuss whether the decision matrices are consistent (Chang, 1996, Kahraman et al., 2004, Kreng and Wu, 2007 and Mikhailov and Tsvetinov, 2004). Saaty, 1977 and Saaty, 1980 first suggested the classical AHP method and emphasized on consistency control. Because of the long and complicated content of a pairwise comparison survey, subjects may lose concentration with the result that their responses may just be a simulation of random choices or somewhat better than random selection. Therefore, the survey process of AHP is a crucial element of accurate decision support. Ramanathan and Ganesh (1994) discussed the group preference aggregation problem and pointed out that expert from different backgrounds and levels of expertise may cause disparities among the group decision matrix. Therefore, aggregation of individual decision matrices is suggested through by weighting expert judgments with a normalized scale. In many of the AHP studies, factors of decision are selected from intangible linguistic terms. Many preference problems have tangible and comparable aspects which can be directly investigated without expert aid. For example, financial analysis outcome is an important input of investment appraisal and results are readily comparable by ranking according to cost or benefit perception. The highest rate of return on investment directly indicates superiority due to financial perspective. Investigation of such problems without these tangible data may cause lack of generality and rationality. The proposed model, GF-AHP, deals with problems mentioned in previous discussions and suggests improving expert system performance by classification of decision makers and use of numerical data with the ranking procedure of Saaty (2008). GF-AHP also proposes a control procedure for decision matrix consistency as it is particularly suggested by the initial study of Saaty and Vargas (1987). Although it is not used in existing FAHP studies, GF-AHP contributes to the literature by developing a centric consistency index (CCI) which is an extended version of the geometric consistency index (GCI). CCI is a detection tool for inconsistent expert consultation and over the boundaries of CCI; the decision support survey should be replaced with collecting new responses. Rethinking of preferences ensures an additional opportunity to increase consensus among the expert group (Saaty & Vargas, 1987). The remainder of this paper is organized as follows: Section 2 briefly describes the ship investment. Section 3 states the methodology used in this paper to investigate the multi-strategy selection. Next, Section 4 presents empirical study, application and result. Finally, conclusion is the subject of the last Section 5.

In the recent literature, the FAHP method has popularity and it is applied for several reasons. In spite of its popularity, the FAHP method has drawbacks such as lack of consistency control and incapability to execute DNI values. The present paper contributes to the literature by ensuring a proper consistency control mechanism, expertise classification and use of DNI values. The CCI method is developed for consistency control of fuzzy extended AHP studies. As discussed previously, many scholars do not report routine control of survey consistency. Another novel contribution is the development of a ranking-and-valuation method for DNI values without an expert consultation. Therefore, a FAHP application is capable of using previously calculated technical particulars if the superiority measure of these data is explicit and indifference between alternatives has no particular importance. This paper does not deal with the analysis of indifference between measurements of alternatives. However, as a further research, indifference analysis of alternatives is an emergent field of study.