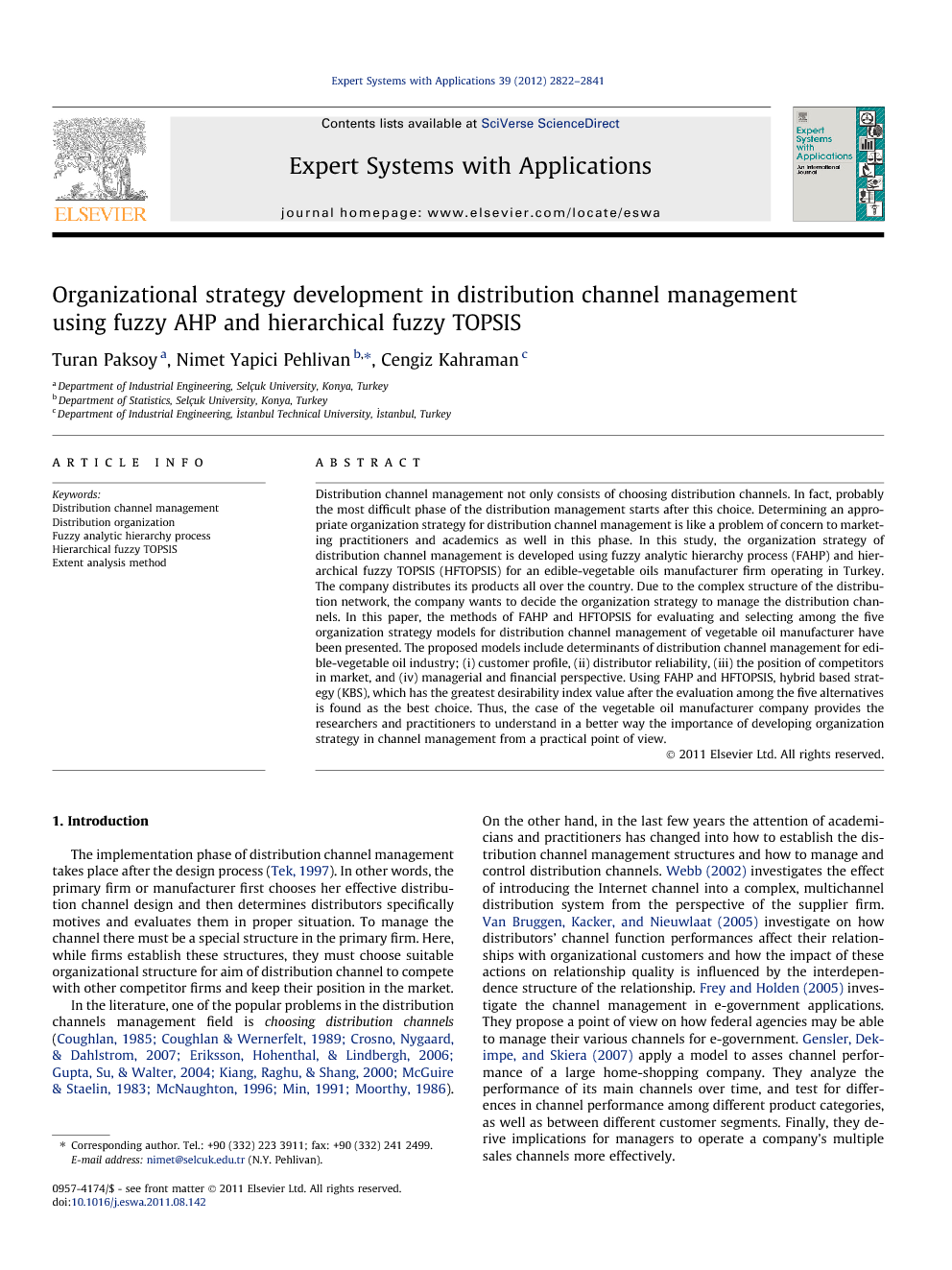 The implementation phase of distribution channel management takes place after the design process (Tek, 1997). In other words, the primary firm or manufacturer first chooses her effective distribution channel design and then determines distributors specifically motives and evaluates them in proper situation. To manage the channel there must be a special structure in the primary firm. Here, while firms establish these structures, they must choose suitable organizational structure for aim of distribution channel to compete with other competitor firms and keep their position in the market. In the literature, one of the popular problems in the distribution channels management field is choosing distribution channels ( Coughlan, 1985, Coughlan and Wernerfelt, 1989, Crosno et al., 2007, Eriksson et al., 2006, Gupta et al., 2004, Kiang et al., 2000, McGuire and Staelin, 1983, McNaughton, 1996, Min, 1991 and Moorthy, 1986). On the other hand, in the last few years the attention of academicians and practitioners has changed into how to establish the distribution channel management structures and how to manage and control distribution channels. Webb (2002) investigates the effect of introducing the Internet channel into a complex, multichannel distribution system from the perspective of the supplier firm. Van Bruggen, Kacker, and Nieuwlaat (2005) investigate on how distributors’ channel function performances affect their relationships with organizational customers and how the impact of these actions on relationship quality is influenced by the interdependence structure of the relationship. Frey and Holden (2005) investigate the channel management in e-government applications. They propose a point of view on how federal agencies may be able to manage their various channels for e-government. Gensler, Dekimpe, and Skiera (2007) apply a model to asses channel performance of a large home-shopping company. They analyze the performance of its main channels over time, and test for differences in channel performance among different product categories, as well as between different customer segments. Finally, they derive implications for managers to operate a company’s multiple sales channels more effectively. Kahraman, Ruan, and Doğan (2003) used the FAHP approach in the selection of the best facility location alternative by taking into account quantitative and qualitative criteria. Bozdağ, Kahraman, and Ruan (2003) have used the FAHP approach in the evaluation of computer integrated manufacturing alternatives by taking into account both intangible and tangible factors. Büyüközkan, Kahraman, and Ruan (2004) employed the FAHP mehod in selecting the most appropriate software development strategy. Kahraman, Cebeci, and Ruan (2004) used the FAHP process to evaluate and to compare the catering firms in Turkey. Tolga, Demircan, and Kahraman (2005) used the methods of FAHP and fuzzy replacement analysis in the operating system selection problem. Başlıgil (2005) provided an analytical toolto select the best software providing the most customer satisfaction. Kong and Liu (2005) aimed to find out the key factors that affect success in E-commerce using Fuzzy AHP. Kahraman, Ertay, and Büyüközkan (2006) proposed an integrated framework based on fuzzy QFD and a fuzzy optimization model to determine the product technical requirements to be considered in designing a product. The coefficients of the objective function are obtained from the approaches of Fuzzy analytic network and Fuzzy analytic hierarchy process. Bozbura, Beskese, and Kahraman (2007) have applied FAHP to improve the quality of prioritization of human capital measurement indicators under the fuzziness. Büyüközkan (2009) proposed an analytic framework to provide practitioners a more effective and efficient model for prioritizing m-commerce requirements. Büyüközkan, Feyzioğlu, and Nebol (2008) proposed a multi criteria decision making approach to effectively evaluate e-logistics-based strategic alliance partners. Önüt and Soner (2008) applied a fuzzy TOPSIS based methodology to solve the solid waste transshipment site selection problem in İstanbul, the criteria weights are calculated by using the AHP. Kahraman, Ateş, Çevik, Gülbay, and Erdoğan (2007) developed a hierarchical fuzzy TOPSIS method for evaluating and selecting among logistic information technologies. Ateş, Çevik, Kahraman, Gülbay, and Erdoğan (2006) constructed a comprehensive hierarchical evaluation model with many main and sub attributes and proposed a new algorithm for fuzzy TOPSIS that enables taking into account the hierarchy in the evaluation model. Dağdeviren, Yavuz, and Kılınç (2009) developed an evaluation model based on the AHP and TOPSIS for the selection of optimal weapon in a fuzzy environment. The AHP is used to analyze the structure of the weapon selection problem and fuzzy TOPSIS method is used to obtain final ranking. Öztürk, Ertuğrul, and Karakaşoğlu (2008) proposed FAHP and Fuzzy TOPSIS for the transportation selection problem, in order to take vague nature of the linguistic assessment into consideration. Ballı and Korukoğlu (2009) proposed a fuzzy decision approach based on FAHP and TOPSIS to select appropriate operating system for computer systems of the firms by taking subjective judgements of decision makers into consideration. Seçme, Bayrakdaoğlu, and Kahraman (2009) proposed a fuzzy multi criteria decision model to evaluate the performances of banks. The largest five commercial banks are examined and evaluated in terms of financial and nonfinancial indicators by integrating the methods of FAHP and TOPSIS. In this study fuzzy analytic hierarchy process (FAHP) and hierarchical fuzzy TOPSIS (HFTOPSIS) methods are used to develop an organizational strategy to manage distribution channels of a vegetable oil producer operating in Turkey. In Section 2, there is a conceptual outline for developing distribution channels management strategy. The third part includes brief information about the firm and sector of subject. In Section 4, decision structure of the firm and the models of FAHP and HFTOPSIS are presented and finally, the comparisons and results of the considered methods are given in the last section.