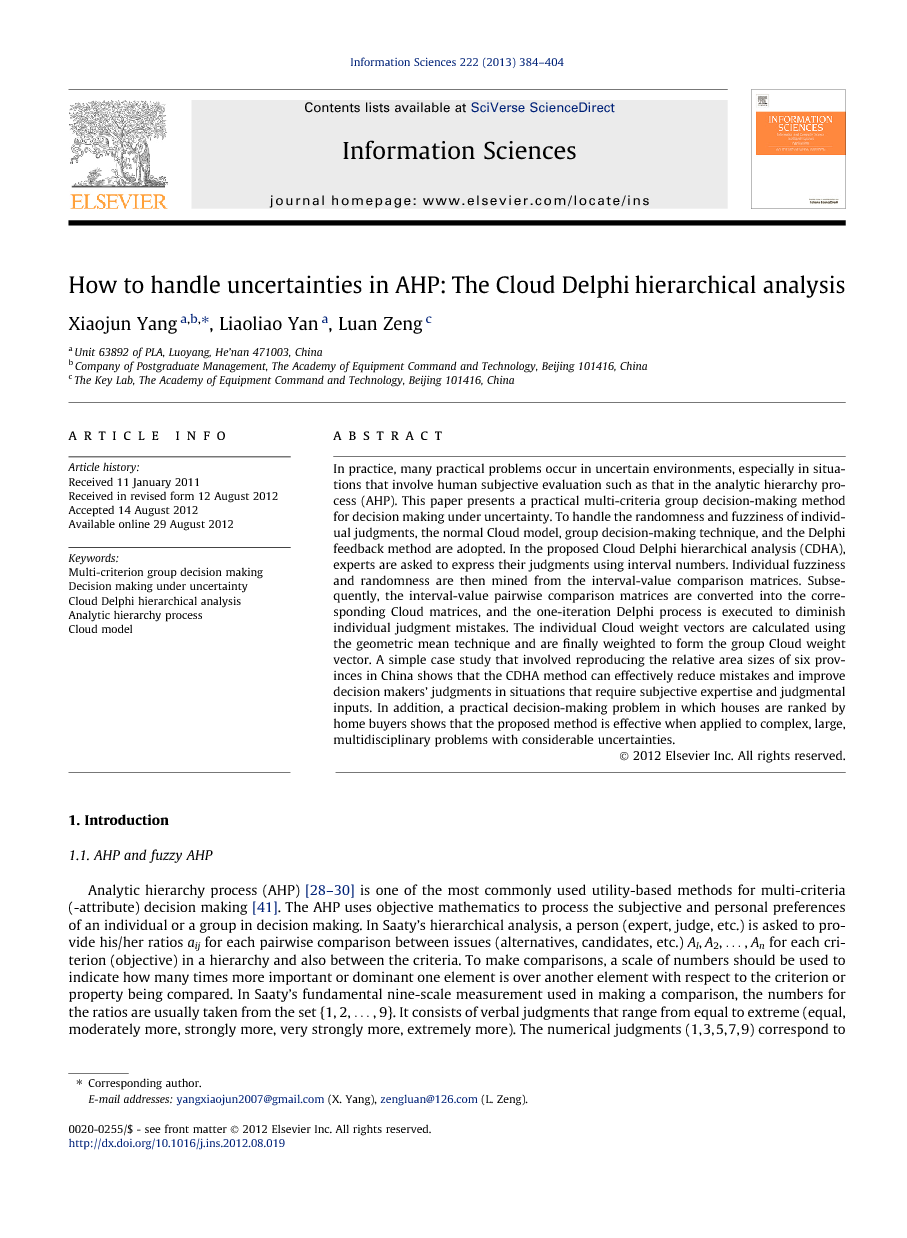 In practice, many practical problems occur in uncertain environments, especially in situations that involve human subjective evaluation such as that in the analytic hierarchy process (AHP). This paper presents a practical multi-criteria group decision-making method for decision making under uncertainty. To handle the randomness and fuzziness of individual judgments, the normal Cloud model, group decision-making technique, and the Delphi feedback method are adopted. In the proposed Cloud Delphi hierarchical analysis (CDHA), experts are asked to express their judgments using interval numbers. Individual fuzziness and randomness are then mined from the interval-value comparison matrices. Subsequently, the interval-value pairwise comparison matrices are converted into the corresponding Cloud matrices, and the one-iteration Delphi process is executed to diminish individual judgment mistakes. The individual Cloud weight vectors are calculated using the geometric mean technique and are finally weighted to form the group Cloud weight vector. A simple case study that involved reproducing the relative area sizes of six provinces in China shows that the CDHA method can effectively reduce mistakes and improve decision makers’ judgments in situations that require subjective expertise and judgmental inputs. In addition, a practical decision-making problem in which houses are ranked by home buyers shows that the proposed method is effective when applied to complex, large, multidisciplinary problems with considerable uncertainties.

The CDHA process is proposed to handle both individual (intrapersonal) and group (interpersonal) judgment uncertainties in AHP. It has the following features: (1) The intrapersonal uncertainties are modeled by the Cloud model. The Cloud model has excellent properties including computational simplicity and natural similarity with the uncertainties in subjective cognition. The numerical parameters of the Cloud model make it intuitive to understand and easy to calculate. We adopt the interval approach to collect DMers’ opinions, which makes them express fuzzy and uncertain judgments more easily. Then, we automatically obtain the intrapersonal fuzziness and randomness from interval comparison judgments. The Cloud model can be exhibited in a graphical way so that the later stages, such as intercomparison, re-examination, and analysis, become more straightforward. (2) The group decision-making technique is adopted to handle the interpersonal uncertainty and to overcome the knowledge limitation of individuals. Different weights are assigned to different DMers according to the quality of their comparison matrices and to their professional knowledge background. (3) A one-iteration feedback and re-evaluation Delphi method is executed to reduce individual mistakes (intrapersonal randomness). In the study, the DMers received feedback information about the group judgment and the consistency of their pairwise comparisons immediately. They had therefore the possibility to redo them. After interacting with group members, individuals can modify their preference information gradually in the process of decision making to make the decision result more reasonable. (4) All the calculations are easy to implement without any intelligent algorithm. This method is very feasible in practical applications. The simple case study of reproducing the relative area sizes of six provinces in China shows that the CDHA process can reduce mistakes and uncertainties, and thus improve DMer’s subjective judgments. A practical decision-making problem of ranking houses by home buyers also shows the effectiveness of the proposed method in real-life decision problems with considerable uncertainties. The capability of handling uncertainties efficiently using simple computations makes CDHA very suitable for a number of applications, such as multi-criteria (-attributes) evaluation, ranking, selection, optimization, prediction, and decision making under uncertainty in a group scenario and in diverse areas. Future research will be concerned with more practical applications using CDHA, and modeling words and constructing the system of “computing with words” using Cloud models.