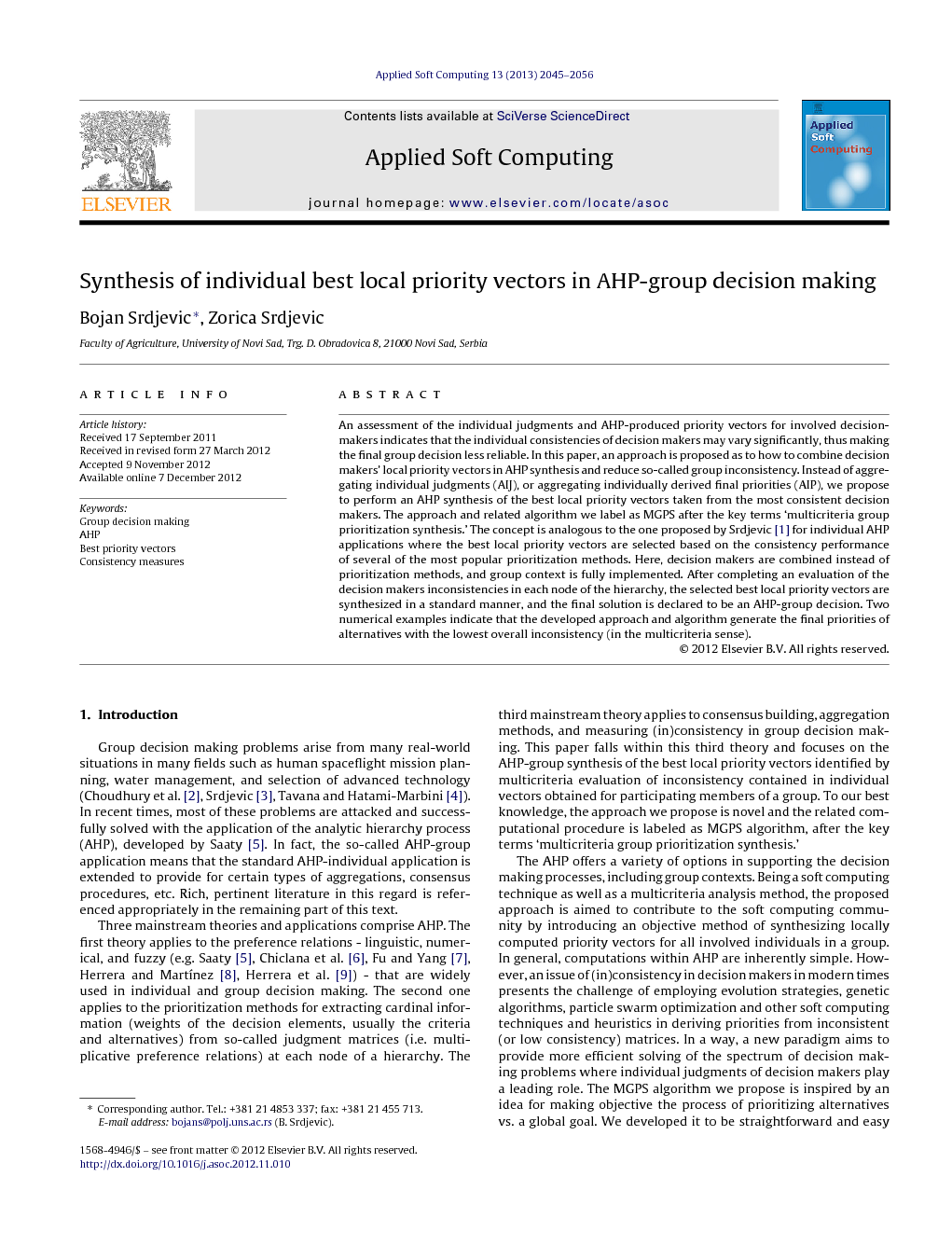 Group decision making problems arise from many real-world situations in many fields such as human spaceflight mission planning, water management, and selection of advanced technology (Choudhury et al. [2], Srdjevic [3], Tavana and Hatami-Marbini [4]). In recent times, most of these problems are attacked and successfully solved with the application of the analytic hierarchy process (AHP), developed by Saaty [5]. In fact, the so-called AHP-group application means that the standard AHP-individual application is extended to provide for certain types of aggregations, consensus procedures, etc. Rich, pertinent literature in this regard is referenced appropriately in the remaining part of this text. Three mainstream theories and applications comprise AHP. The first theory applies to the preference relations - linguistic, numerical, and fuzzy (e.g. Saaty [5], Chiclana et al. [6], Fu and Yang [7], Herrera and Martínez [8], Herrera et al. [9]) - that are widely used in individual and group decision making. The second one applies to the prioritization methods for extracting cardinal information (weights of the decision elements, usually the criteria and alternatives) from so-called judgment matrices (i.e. multiplicative preference relations) at each node of a hierarchy. The third mainstream theory applies to consensus building, aggregation methods, and measuring (in)consistency in group decision making. This paper falls within this third theory and focuses on the AHP-group synthesis of the best local priority vectors identified by multicriteria evaluation of inconsistency contained in individual vectors obtained for participating members of a group. To our best knowledge, the approach we propose is novel and the related computational procedure is labeled as MGPS algorithm, after the key terms ‘multicriteria group prioritization synthesis.’ The AHP offers a variety of options in supporting the decision making processes, including group contexts. Being a soft computing technique as well as a multicriteria analysis method, the proposed approach is aimed to contribute to the soft computing community by introducing an objective method of synthesizing locally computed priority vectors for all involved individuals in a group. In general, computations within AHP are inherently simple. However, an issue of (in)consistency in decision makers in modern times presents the challenge of employing evolution strategies, genetic algorithms, particle swarm optimization and other soft computing techniques and heuristics in deriving priorities from inconsistent (or low consistency) matrices. In a way, a new paradigm aims to provide more efficient solving of the spectrum of decision making problems where individual judgments of decision makers play a leading role. The MGPS algorithm we propose is inspired by an idea for making objective the process of prioritizing alternatives vs. a global goal. We developed it to be straightforward and easy to program and implement in real life applications. Being fully programmed in FORTRAN, on a proof-of-concept level it was successfully used in many test applications as well as in two described examples presented in the second part of this paper. Most of the research papers dominantly report theoretical works and application results concentrating on just one ratio-scale matrix at a time. Much fewer research reports relate to the whole hierarchy where the original AHP philosophy belongs to and the concept of AHP synthesis is fully implemented. This paper relates to the latter case only; that is, we consider a complete AHP hierarchy, not just one local matrix. In addition, the presented work is aimed to cover several topics related to AHP application in group contexts where decision makers demonstrate different consistencies. The core of our approach is to perform AHP synthesis of the best local priority vectors taken from the most consistent decision makers. Without losing generality, if we consider a three level hierarchy (goal-criteria-alternatives), the number of matrices is 1 + na, where na is the number of alternatives. If there are K decision makers then there are K(1 + na) matrices, and in every node of a hierarchy there is a set of K matrices with their priority vectors. Some vectors are more consistent than others, and it is possible to identify the best one if certain criteria are adopted for assessing their quality regarding consistency. On the other hand, consistency measures applicable to AHP can be divided into two groups: (a) general (e.g. Euclidean Distance or Minimum Violation), and (b) specific (e.g. prioritization method related, such as CR for eigenvector method or GCI for logarithmic least square method). If consistency measures are used as criteria for assessing the quality of priority vectors derived from decision makers at a given node of hierarchy, then the best (optimal in multicriteria sense) priority vector can be identified and propagated to the final AHP synthesis. Obviously, the final synthesis is performed with the best vectors and therefore the final (group) priorities of alternatives are objectively the best possible. The paper is organized as follows: in Section 2, we briefly present reviewed related research, basic preliminary knowledge of AHP, including its most commonly used prioritization method known as the eigenvector (EV) method. In Section 3, we develop an approach to AHP-group synthesis following an idea presented in Srdjevic [1], and instead of AIJ or AIP aggregations, we propose to combine the local priorities derived from group members based on a multicriteria evaluation of their demonstrated consistencies. In Sections 4 and 5 two illustrative examples from real-life AHP-group applications are provided, and the results of MGPS application are discussed. Section 6 presents concluding remarks and an agenda for future research in the subject area