عنوان انگلیسی
The Transtheoretical Model and Stress Management Practices in Women at Risk for, or Infected With, HIV
دانلود فوری مقاله + سفارش ترجمه 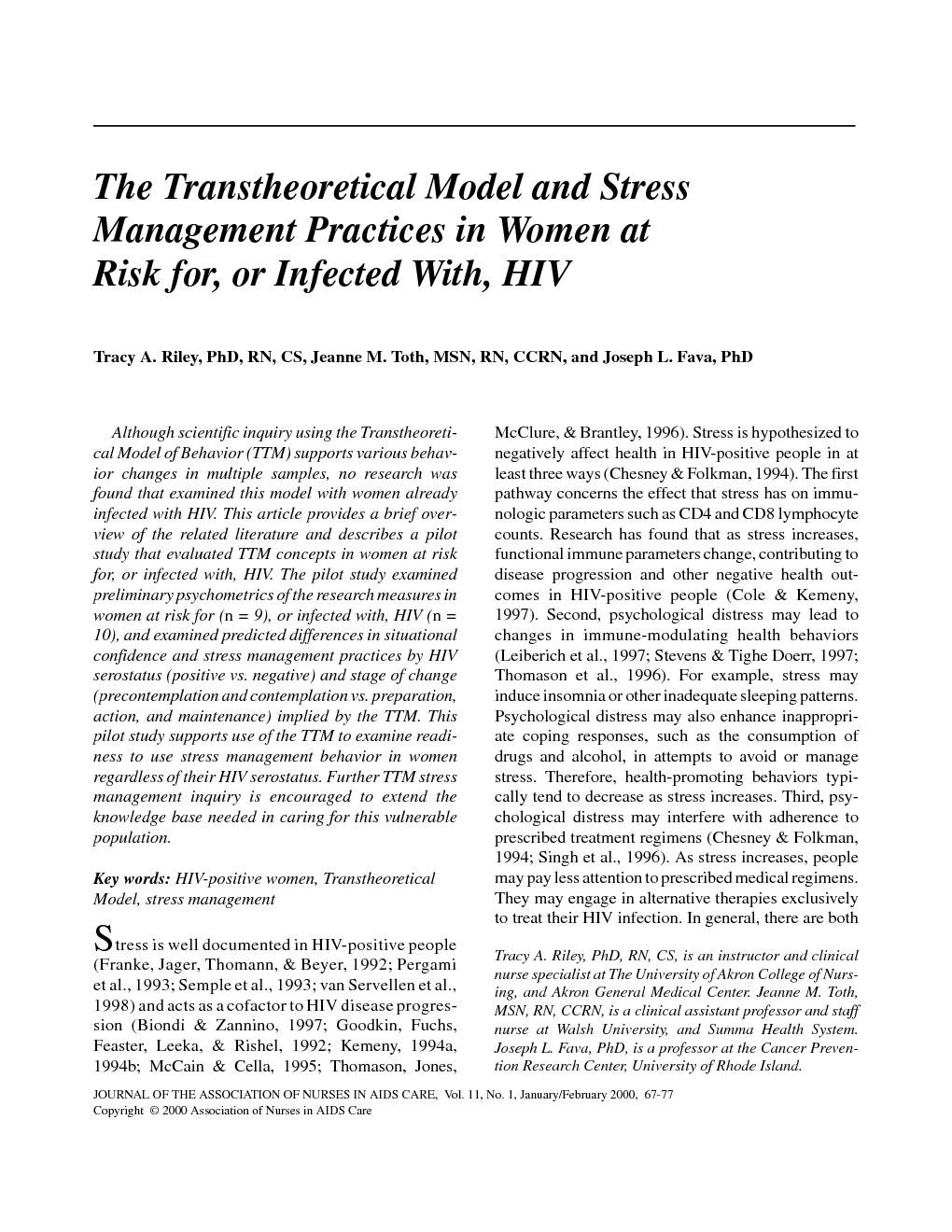 Although scientific inquiry using the Transtheoretical Model of Behavior (TTM) supports various behavior changes in multiple samples, no research was found that examined this model with women already infected with HIV. This article provides a brief overview of the related literature and describes a pilot study that evaluated TTM concepts in women at risk for, or infected with, HIV. The pilot study examined preliminary psychometrics of the research measures in women at risk for (n = 9), or infected with, HIV (n = 10), and examined predicted differences in situational confidence and stress management practices by HIV serostatus (positive vs. negative) and stage of change (precontemplation and contemplation vs. preparation, action, and maintenance) implied by the TTM. This pilot study supports use of the TTM to examine readiness to use stress management behavior in women regardless of their HIV serostatus. Further TTM stress management inquiry is encouraged to extend the knowledge base needed in caring for this vulnerable population.

Stress is well documented in HIV-positive people (Franke, Jager, Thomann, & Beyer, 1992; Pergami et al., 1993; Semple et al., 1993; van Servellen et al., 1998) and acts as a cofactor to HIV disease progression (Biondi & Zannino, 1997; Goodkin, Fuchs, Feaster, Leeka, & Rishel, 1992; Kemeny, 1994a and Kemeny, 1994b; McCain & Cella, 1995; Thomason, Jones, McClure, & Brantley, 1996). Stress is hypothesized to negatively affect health in HIV-positive people in at least three ways (Chesney & Folkman, 1994). The first pathway concerns the effect that stress has on immunologic parameters such as CD4 and CD8 lymphocyte counts. Research has found that as stress increases, functional immune parameters change, contributing to disease progression and other negative health outcomes in HIV-positive people (Cole & Kemeny, 1997). Second, psychological distress may lead to changes in immune-modulating health behaviors (Leiberich et al., 1997; Stevens & Tighe Doerr, 1997; Thomason et al., 1996). For example, stress may induce insomnia or other inadequate sleeping patterns. Psychological distress may also enhance inappropriate coping responses, such as the consumption of drugs and alcohol, in attempts to avoid or manage stress. Therefore, health-promoting behaviors typically tend to decrease as stress increases. Third, psychological distress may interfere with adherence to prescribed treatment regimens (Chesney & Folkman, 1994; Singh et al., 1996). As stress increases, people may pay less attention to prescribed medical regimens. They may engage in alternative therapies exclusively to treat their HIV infection. In general, there are both direct and indirect negative effects of stress on health in HIV-positive people. A preliminary body of research indicates that stress management practices may mediate stress and improve diverse health outcomes in HIV-positive people (Andrews, 1995; Antoni et al., 1991; Barroso, 1995; LaPerriere et al., 1997; Lutgendorf et al., 1997; McCain, Zeller, Cella, Urbanski, & Novak, 1996; Taylor, 1995). Stress management techniques may be categorized according to the component of the stress process they tend to affect, including techniques to reduce physiologic arousal elicited by stress and techniques to reduce the appraisal of stress or to enhance coping skills (Zakowski, Hall, & Baum, 1992). Thus, stress management is actually composed of diverse health-promoting practices that may work singly or in concert to produce stress reduction. For example, relaxation techniques such as guided imagery, meditation, and self-hypnosis have been used to manage expected and acute stressors and may also be beneficial in relieving the discomfort caused by symptom distress (Taylor, 1995; Zakowski et al., 1992). Coping and social support, as cognitive behavioral components of stress management, have served to lower anxiety and mood disturbance in HIV-positive individuals (Andrews, 1995; Barroso, 1995; Lutgendorf et al., 1998). Furthermore, behavioral approaches to stress management such as aerobic exercising have been found to mediate stress-induced immune depression in HIV-positive individuals (LaPerriere et al., 1997). Therefore, an important goal of nurses who wish to enhance the overall health of HIV-positive people should be to include the use of strategies to increase health-promoting stress management practices. However, though research demonstrates the health benefits of stress management practices for HIV-positive people, research targeted toward assisting HIV-positive people to actually adopt those practices is lacking. The Transtheoretical Model of Behavior Change (TTM) (Prochaska & DiClemente, 1982) provides an integrative framework for understanding and facilitating behavior change. The TTM proposes that successful behavior change is most likely when the following indicators of change are present: a personal readiness to change one's behavior (stage of change) (Prochaska & DiClemente, 1982), a personal belief that one can carry out the proposed behavior change in various settings or situations (situational confidence) (Di-Clemente, Prochaska, & Gibertini, 1985; Velicer, DiClemente, Rossi, & Prochaska, 1990), and a personal belief that the pros outweigh the cons of the proposed behavior change (decisional balance) (Velicer, DiClemente, Prochaska, & Brandenburg, 1985). Although many individuals may not be ready to adopt a new behavior, the TTM postulates that the behavior change process can still progress by helping those individuals in an early stage of change (precontemplation or contemplation) move ahead one stage at a time until they are ready to actually change their behavior. The TTM also postulates that specific processes of change facilitate movement through these stages of change (Prochaska, Velicer, DiClemente, & Fava, 1988). To date, scientific inquiry using the TTM has focused on describing and facilitating behavior change in a variety of areas including the adoption of healthy behaviors such as mammography screening (Rakowski, Fulton, & Feldman, 1993), smoking cessation (Prochaska, DiClemente, Velicer, & Rossi, 1993), healthier dietary patterns (Rossi et al., 1993), exercise (Marcus, Rossi, Selby, Niaura, & Abrams, 1992), and safer sexual practices (e.g., condom use) for preventing transmission of HIV (Prochaska, Redding, Harlow, Rossi, & Velicer, 1994). However, no published studies were found that evaluated TTM concepts with people already infected with HIV. Furthermore, although preliminary TTM stress management research efforts have been initiated (Velicer, Prochaska, Fava, Norman, & Redding, 1998), information was needed to determine the suitability of the developed TTM stress management research measures for people at risk for, or infected with, HIV. Therefore, the purposes of this descriptive pilot study were to examine preliminary psychometrics of the research measures in women at risk for, or infected with, HIV, and to explore differences in self-efficacy and stress management by HIV serostatus (positive vs. negative) and by stage of change (precontemplation and contemplation vs. preparation, action, and maintenance). This pilot study was limited to women at risk for, or infected with, HIV for several reasons. First, women now account for a greater proportion of AIDS cases then ever before (Centers for Disease Control and Prevention, 1998; Wortley & Fleming, 1997), and research focusing on HIV-positive women needs to be critically expanded (McCain & Zeller, 1994; Melnick, Wertheimer, & Pinn, 1995). Second, although the TTM had been used with primary HIV prevention (Prochaska, Redding, et al., 1994), there were no data to support use of the TTM with HIV-positive individuals. Therefore, evaluating the TTM with women at risk for HIV infection as well as those infected with HIV would serve to extend the TTM scientific literature to a new population. Last, qualitative and quantitative gender differences in stress, health promoting practices, and health outcomes have been noted in the related scientific literature (Anderson, 1995; Baum & Grunberg, 1991; Kennedy, Skurnick, Foley, & Louria, 1995; Melnick et al., 1995; Muhlenkamp & Broerman, 1988; Walker, Volkan, Sechrist, & Pender, 1988). Limiting this pilot study to women served to reduce any potential gender confound in the study variables.

The TTM is a relatively new framework that nurses may use to understand and facilitate behavior change on an individual or group level. This study provided preliminary evidence to support the use of the TTM measures in evaluating health-promoting stress management practices in women regardless of their HIV serostatus. Except for stage of change, there were no significant differences in the TTM or stress management indicators between the women at risk for, or those infected with, HIV. However, 40% of the HIV-positive women were in the early stages of change, indicating that these women were not yet ready to participate in stress management practices. Reasons for their lack of interest or intention to change are not known. This was the first study to examine psychometrics of these measures in women at risk for, or infected with, HIV. Many of these measures were developed for use in other (HIV-negative) samples and previously tested on White Americans from a higher socioeconomic status than that of the women in this study. However, all of the measures used with this sample performed adequately to well with respect to internal consistency. Preliminary evidence supporting the use of these measures with larger samples of similar women was found. Differences in the TTM variables were assessed by HIV serostatus and by stage of change. Other than stage of change, there were no significant differences in the study variables between the HIV-positive and HIV-negative women. When the women were grouped according to the early or late stages of change, only situational confidence was found to be significantly higher among women in the later stages of change. Thus, women in the later stages of stress management behavior felt significantly more confident about their ability to engage in stress management practices in diverse situations than did women in the earlier stages. Contrary to expectations, no significant differences were noted with stress management practices between women in the early versus late stages of change. This finding may be related more to the small sample size and insufficient power than actual lack of significant differences between the groups, although it could also be related to the measure of stress management practices used in this study. Because of the small sample size and combined grouping of the women into two stages rather than into the traditional five stages of change, decisional balance stage differences could not be adequately explored in this pilot study. Traditional TTM approaches indicate that the pros and cons of behavior change would be evaluated within each of the stages of change, not by early versus late stages. In addition, scores on the decisional balance measure should be converted to T scores and compared across each of the stages with the expectation that those in the later stages exhibit significantly more pros, and those in the earlier stages significantly more cons of the behavior. However, the sample size used in this preliminary study and the small number of women within each stage prohibited this type of analysis at this time.