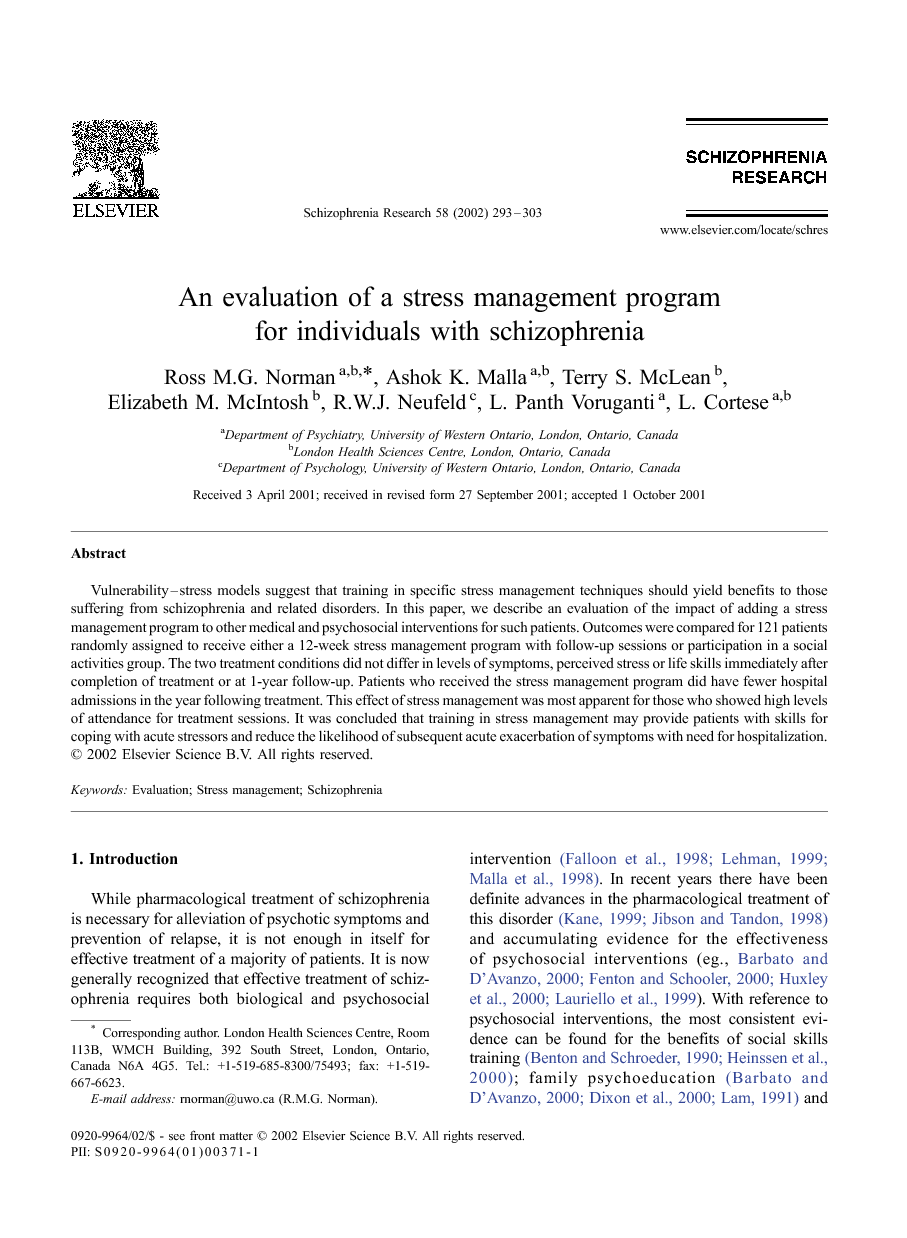 While pharmacological treatment of schizophrenia is necessary for alleviation of psychotic symptoms and prevention of relapse, it is not enough in itself for effective treatment of a majority of patients. It is now generally recognized that effective treatment of schizophrenia requires both biological and psychosocial intervention Falloon et al., 1998, Lehman, 1999 and Malla et al., 1998. In recent years there have been definite advances in the pharmacological treatment of this disorder Kane, 1999 and Jibson and Tandon, 1998 and accumulating evidence for the effectiveness of psychosocial interventions (eg., Barbato and D'Avanzo, 2000, Fenton and Schooler, 2000, Huxley et al., 2000 and Lauriello et al., 1999). With reference to psychosocial interventions, the most consistent evidence can be found for the benefits of social skills training Benton and Schroeder, 1990 and Heinssen et al., 2000; family psychoeducation Barbato and D'Avanzo, 2000, Dixon et al., 2000 and Lam, 1991 and provision of individualized case management support services Chamberlain and Rapp, 1991 and Mueser et al., 1998. Despite the advances that have been made, there is still much work to be done in developing and disseminating interventions to further improve treatment outcome Bustillo et al., 1999, Kissling and Leucht, 1999, Meltzer, 1999 and Schultz and Andreasen, 1999. In this paper, we report the results of a study designed to evaluate the impact of an additional intervention when delivered in the context of a treatment and rehabilitation program that already combines pharmacological treatment with such psychosocial interventions as case management, social skills training and family psychoeducation. The particular intervention being evaluated has its roots in the stress vulnerability model of schizophrenia (eg., Fowles, 1992, Nicholson and Neufeld, 1992 and Nuechterlein and Dawson, 1984). Evidence for the influence of stress on the course of schizophrenia comes from numerous studies examining the relationship between stressful life events and variation in intensity of symptoms (eg., Doering et al., 1998, Dohrenwend and Egri, 1981, Norman and Malla, 1993, Norman and Malla, 1994 and Ventura et al., 1989) as well as research on the effects of stressful family milieu on the course of illness (eg., Falloon and McGill, 1985 and Butzlaff and Hooley, 1998). One of the implications of a stress–vulnerability model of schizophrenia and related disorders is the possible benefits of a program designed to help clients cope more effectively with stress. Many studies have systematically evaluated the effectiveness of stress management programs in the general population or in individuals suffering from disorders other than schizophrenia (eg., Johnston, 1991, McCrady et al., 1991 and Shaw et al., 1991). On the other hand, there have been only sporadic reports of individual case studies and descriptions of programs for schizophrenic clients using such interventions as relaxation training or training in problem-solving skills (eg., Starkey et al., 1995, Slade, 1972 and Bellack et al., 1989). There is evidence that schizophrenic clients may sometimes develop and use comparable techniques for dealing with stressors associated with their symptoms Breier and Strauss, 1983, Carr, 1988 and Falloon and Talbot, 1981. Up until the inception of this study, however, there had not been reports of well controlled evaluations of the effects of adding specific stress management training to pharmacological and other psychosocial interventions that have been found effective in the treatment of schizophrenia.