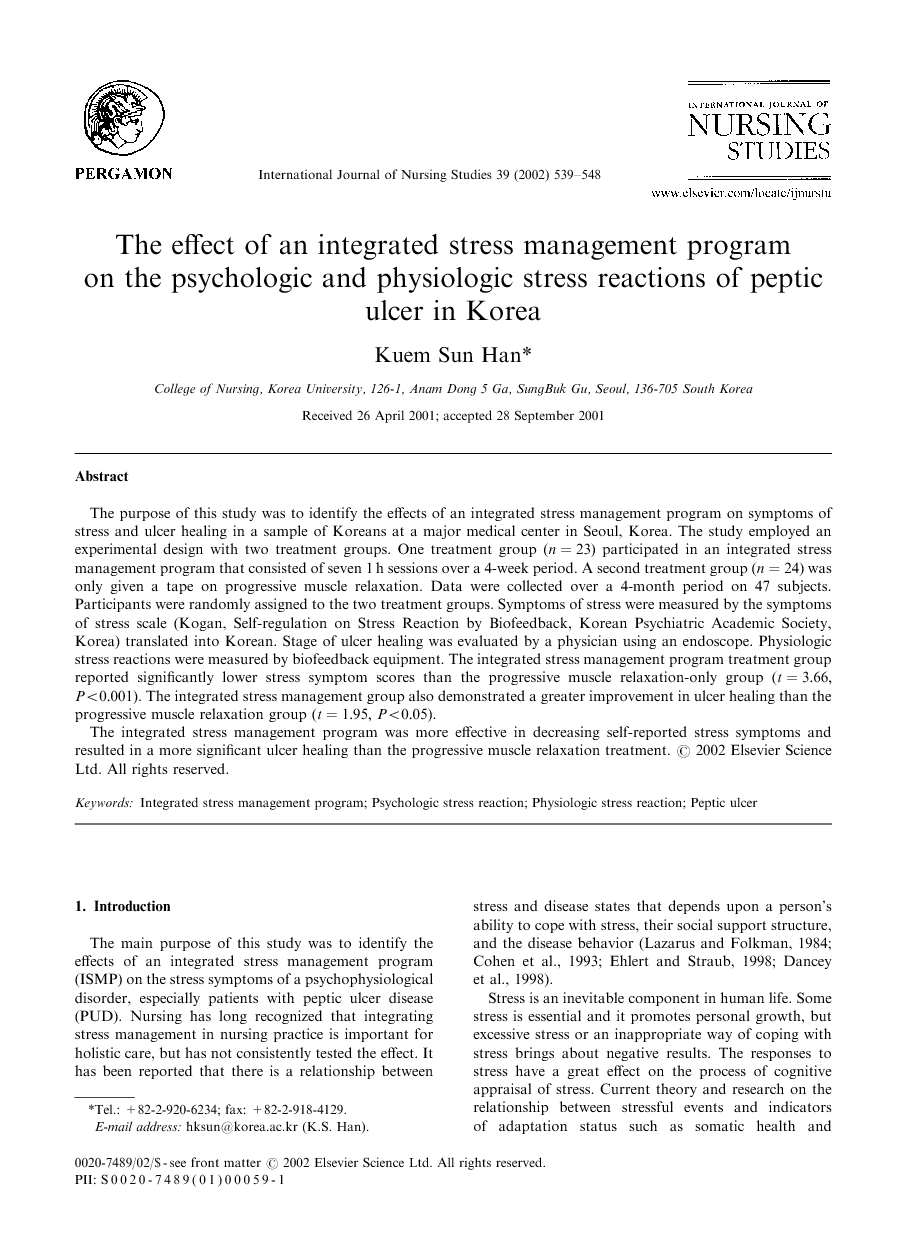 The main purpose of this study was to identify the effects of an integrated stress management program (ISMP) on the stress symptoms of a psychophysiological disorder, especially patients with peptic ulcer disease (PUD). Nursing has long recognized that integrating stress management in nursing practice is important for holistic care, but has not consistently tested the effect. It has been reported that there is a relationship between stress and disease states that depends upon a person's ability to cope with stress, their social support structure, and the disease behavior (Lazarus and Folkman, 1984; Cohen et al., 1993; Ehlert and Straub, 1998; Dancey et al., 1998). Stress is an inevitable component in human life. Some stress is essential and it promotes personal growth, but excessive stress or an inappropriate way of coping with stress brings about negative results. The responses to stress have a great effect on the process of cognitive appraisal of stress. Current theory and research on the relationship between stressful events and indicators of adaptation status such as somatic health and psychological symptoms show that this relationship is mediated by coping processes, social support, cognitive appraisal, and health status (Go Kyoung Bong and Lee Sang In, 1992; Leclerc et al., 1997; Roger, 1998). How individuals cope with traumatic and highly stressful experiences has been shown to be an important factor in their subsequent psychological and physical well-being. Traditionally, PUD has been considered to be a stress-associated psychosomatic disease. The importance of emotional disturbances due to stress has long been shown to be a consideration in the pathogenesis of PUD and in other ‘psychosomatic’ illnesses (Weiner, 1983; McGrae, 1984; Kim Mi Young and Hwang Ik Gun, 1987). Psychosomatic factors in the etiology of peptic ulcer have become unfashionable since the discovery of Helicobactor pylori (H. pylori). H. pylori is a spiral-shaped bacterium found in stomach, which damages stomach and duodenal tissues along with acid secretion, causing inflammation, and peptic ulcers. But psychological stress has an impact on the onset and course of ulcer disease. There is solid evidence that psychological stress induces many ulcers and impairs response to treatment, while helicobactor is inadequate as a monocausal explanation as most infected people do not develop ulcers. Psychological stress probably functions most often as a cofactor with H. pylori. It may act by stimulating the production of gastric acid or by promoting behavior that causes a risk to health (Leventein, 1998). Also, there are some researches that signify the importance of emotional disturbance due to stress in the pathogenesis of PUD which cannot be ignored (Bleich and Ratan, 1996; Sullivan and Gratton, 1999). Among patients with frequent recurrences of these, a positive relationship between psychological stress and bleeding, erosive upper gastro-intestinal lesions is reported (Fukunishi et al., 1996; Wittrock and Myers, 1998). Gastro-intestinal disease is the number one morbidity medical problem in Korea, and the incidence of gastro-intestinal cancer is even higher than the incidence of cardiovascular disease. Epidemiological studies show that the incidence of ulcers in Koreans is related to the stress level and diet habits, particularly the spicy Korean food, and alcohol consumption (Korean Health and Welfare, 1998). The inability to properly manage stress, perceived stress, and ways of coping are shown to be important in the development of PUD (Go Kyoung Bong et al., 1994). A number of researchers have examined the effectiveness of stress management for psychophysiological patients (Shapiro and Lehrer, 1980; Scandrette et al., 1986; Blanchard et al., 1986; Bosley and Allen, 1989; Lehrer et al., 1994; Hostick et al., 1997), but the research on stress management has been focused only on physiological outcomes. The effects of stress management programs have been reported for cardiovascular disease and other disorders, but there is little on PUD patients. The interaction approach to the study of stress, as exemplified by the work of Lazarus and colleagues, focused on cognitive appraisal, evaluation of potentially stressful stimuli and the coping processes that consequentially occur (Lazarus and Folkman, 1984; Epstein, 1992; Lehrer et al., 1993). In this research, the purpose is for developing an intervention for the alleviation and management of stress of patients with PUD. An ISMP as an intervention considers physiological, cognitive, behavioral, and emotional aspects associated with changes in the healing status of the ulcer.

Integrated stress management is consistent with nursing's emphasis on holistic care. The scope of nursing practice should include psychophysiological treatment modalities such as the ISMP. The ISMP has a potential application for a wide variety of stress-related disorders.