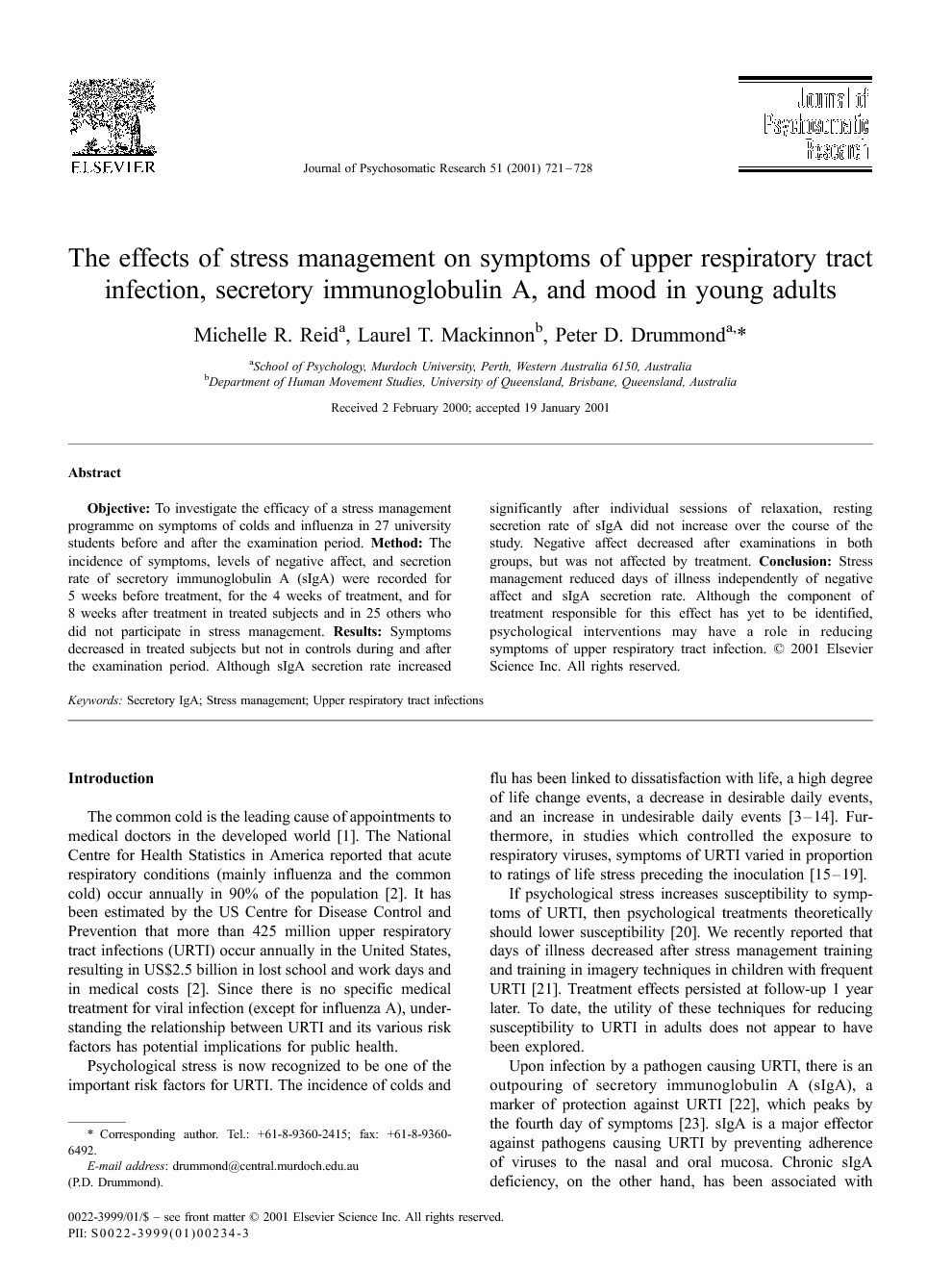 Objective: To investigate the efficacy of a stress management programme on symptoms of colds and influenza in 27 university students before and after the examination period. Method: The incidence of symptoms, levels of negative affect, and secretion rate of secretory immunoglobulin A (sIgA) were recorded for 5 weeks before treatment, for the 4 weeks of treatment, and for 8 weeks after treatment in treated subjects and in 25 others who did not participate in stress management. Results: Symptoms decreased in treated subjects but not in controls during and after the examination period. Although sIgA secretion rate increased significantly after individual sessions of relaxation, resting secretion rate of sIgA did not increase over the course of the study. Negative affect decreased after examinations in both groups, but was not affected by treatment. Conclusion: Stress management reduced days of illness independently of negative affect and sIgA secretion rate. Although the component of treatment responsible for this effect has yet to be identified, psychological interventions may have a role in reducing symptoms of upper respiratory tract infection.

The common cold is the leading cause of appointments to medical doctors in the developed world [1]. The National Centre for Health Statistics in America reported that acute respiratory conditions (mainly influenza and the common cold) occur annually in 90% of the population [2]. It has been estimated by the US Centre for Disease Control and Prevention that more than 425 million upper respiratory tract infections (URTI) occur annually in the United States, resulting in US$2.5 billion in lost school and work days and in medical costs [2]. Since there is no specific medical treatment for viral infection (except for influenza A), understanding the relationship between URTI and its various risk factors has potential implications for public health. Psychological stress is now recognized to be one of the important risk factors for URTI. The incidence of colds and flu has been linked to dissatisfaction with life, a high degree of life change events, a decrease in desirable daily events, and an increase in undesirable daily events [3], [4], [5], [6], [7], [8], [9], [10], [11], [12], [13] and [14]. Furthermore, in studies which controlled the exposure to respiratory viruses, symptoms of URTI varied in proportion to ratings of life stress preceding the inoculation [15], [16], [17], [18] and [19]. If psychological stress increases susceptibility to symptoms of URTI, then psychological treatments theoretically should lower susceptibility [20]. We recently reported that days of illness decreased after stress management training and training in imagery techniques in children with frequent URTI [21]. Treatment effects persisted at follow-up 1 year later. To date, the utility of these techniques for reducing susceptibility to URTI in adults does not appear to have been explored. Upon infection by a pathogen causing URTI, there is an outpouring of secretory immunoglobulin A (sIgA), a marker of protection against URTI [22], which peaks by the fourth day of symptoms [23]. sIgA is a major effector against pathogens causing URTI by preventing adherence of viruses to the nasal and oral mucosa. Chronic sIgA deficiency, on the other hand, has been associated with recurrent URTI [24] and [25], presumably due to loss of this important effector function. A variety of psychological techniques involving various kinds of relaxation have been found to be effective in increasing sIgA levels. Interventions employed in these studies include humorous video [20] and [26], progressive muscle relaxation and focused breathing with and without imagery [27], Benson's relaxation response, guided visualization, massage, lying quietly with eyes closed [28], focused breathing alone [29], music-assisted specific imagery, music-assisted nondirected imagery, sitting quietly [30] and [31], hypnosis with and without specific suggestion to alter immune responses [32], and relaxation with and without specific suggestions [33] and [34]. These findings are important because they offer the possibility of developing psychological treatments to increase resistance to URTI by increasing average levels of sIgA. In a previous study in our laboratory [21], a decrease in symptoms of URTI toward the end of psychological treatment was accompanied by an increase in basal levels of sIgA. Thus, psychological treatment may increase resistance to infection of the upper respiratory tract. The aim of the present study was to determine whether stress management techniques would decrease symptoms of URTI in university students during the examination period, a time traditionally regarded as highly stressful. We also wanted to determine whether stress management techniques would influence basal secretion of sIgA. We hypothesized that basal secretion of sIgA would be higher and symptoms of colds and flu would be lower in students who received stress management training than in a control group who recorded their cold and flu symptoms over the study period but who were not trained in stress management.

The main finding of the present study was that the number of days with symptoms of an URTI decreased in treated subjects but not in controls after psychological treatment. This was not simply due to faster resolution of residual symptoms because the number of days with two or more of the core symptoms of an URTI also decreased after the treatment phase. Contrary to expectations, however, the psychological treatment did not influence weekly ratings of negative affect or the basal rate of sIgA secretion. We expected that stress would peak and infections would increase around the examination period; however, both stress ratings and symptoms of URTI remained fairly constant in untreated subjects during the 13-week period leading up to and including the examinations. The workload of most students was spread fairly evenly over the semester, perhaps explaining why stress ratings did not increase as examinations approached. After the examination period, stress ratings decreased predictably but symptoms of URTI persisted in untreated subjects. These findings suggest that susceptibility to URTI persisted for some time after stress had resolved. The decrease in the incidence of cold and flu symptoms in treated subjects after stress management training is consistent with the notion that psychological stress is a risk factor for URTI [17] and [19]. The treatment was more effective for reducing symptoms of URTI than for alleviating allergic symptoms, suggesting that the treatment had a specific effect on the mechanism that protects against colds and flu. Our results do not clarify this mechanism because the resting secretion rate of sIgA did not increase in parallel with treatment effects. However, sIgA did increase immediately after individual sessions of relaxation. The increase was substantial, indicating that relaxation is a potent stimulus for enhancing sIgA secretion (see also [28], [29], [30], [31], [32], [33] and [34]). Although the sIgA secretion rate had returned to baseline when next measured some days later, the transient increase after regular episodes of relaxation may have helped to protect against infection. Alternatively, the treatment may have strengthened systemic immunity [44] and [45]. The other possibility, that treated subjects changed their criterion for reporting symptoms of colds and flu, seems unlikely because other self-reported measures (i.e., allergies and mood) were unaffected by treatment. In contrast to the present findings, Hewson-Bower and Drummond [21] reported that the sIgA concentration increased over 17 weeks of psychological treatment focusing on stress management and relaxation with guided imagery in children who were susceptible to recurrent respiratory infections. Possibly the current treatment was too short to impact on sIgA levels, or sIgA was sampled too infrequently to establish representative levels. For example, transient increases in sIgA during psychological stress [46] followed by more persistent decreases in association with negative affect [47] could contribute to variation in levels from one occasion to the next. Ratings of negative affect, assessed by the total score on the POMS, did not reflect a treatment effect. Since the POMS was filled out weekly, an effect of treatment on minor daily hassles may have been overlooked. The aim of the treatment was to enhance stress coping skills by a combination of cognitive and physical relaxation techniques. These procedures were effective in the short term, as judged by a substantial increase in the sIgA secretion rate immediately after relaxation. However, the relaxation strategies had little impact on weekly ratings of negative affect, perhaps because of an increase in time pressures and workload as assignments fell due and exams approached. The requirement to attend treatment sessions and to complete homework exercises may even have added to these time pressures. Since the treatment lasted only 4 weeks, subjects might not have had enough time to master the various techniques presented during treatment before having to put them into practice. Nevertheless, some aspect of the treatment had a positive impact on symptoms of URTI. Dienzer and Schuller [48] reported that sIgA decreased progressively during the examination period in medical students, and outlasted the examination period by more than 6 days. Similar effects were observed previously in dental students during examinations [49], suggesting that secretion of sIgA is inhibited during prolonged stressful periods. The secretion rate returned to baseline during low stress periods after exams [49] and [50]. In the present study, sIgA decreased progressively as exams approached, but did not recover in the single sample taken several weeks after the exams. Thus, there was no direct link between a decrease in sIgA production and URTI symptomatology. Dienzer and Schuller [48] could identify no relationship between levels of sIgA and symptoms of URTI over a 2-week assessment period in 42 medical students, but this study may have lacked power because of the short period of URTI assessment. In contrast, two studies on athletes have shown a relationship between levels of sIgA and URTI incidence during periods of physical stress (intense exercise training) over both the short term (10 days) [51] and longer term (10 weeks to 7 months) [52]. In conclusion, the findings of this study suggest that psychological treatment reduces symptoms of URTI independently of negative affect and resting levels of sIgA. Although the specific component of treatment responsible for this effect has yet to be identified, psychological interventions appear to have a role in reducing recurrent symptoms of colds and flu.