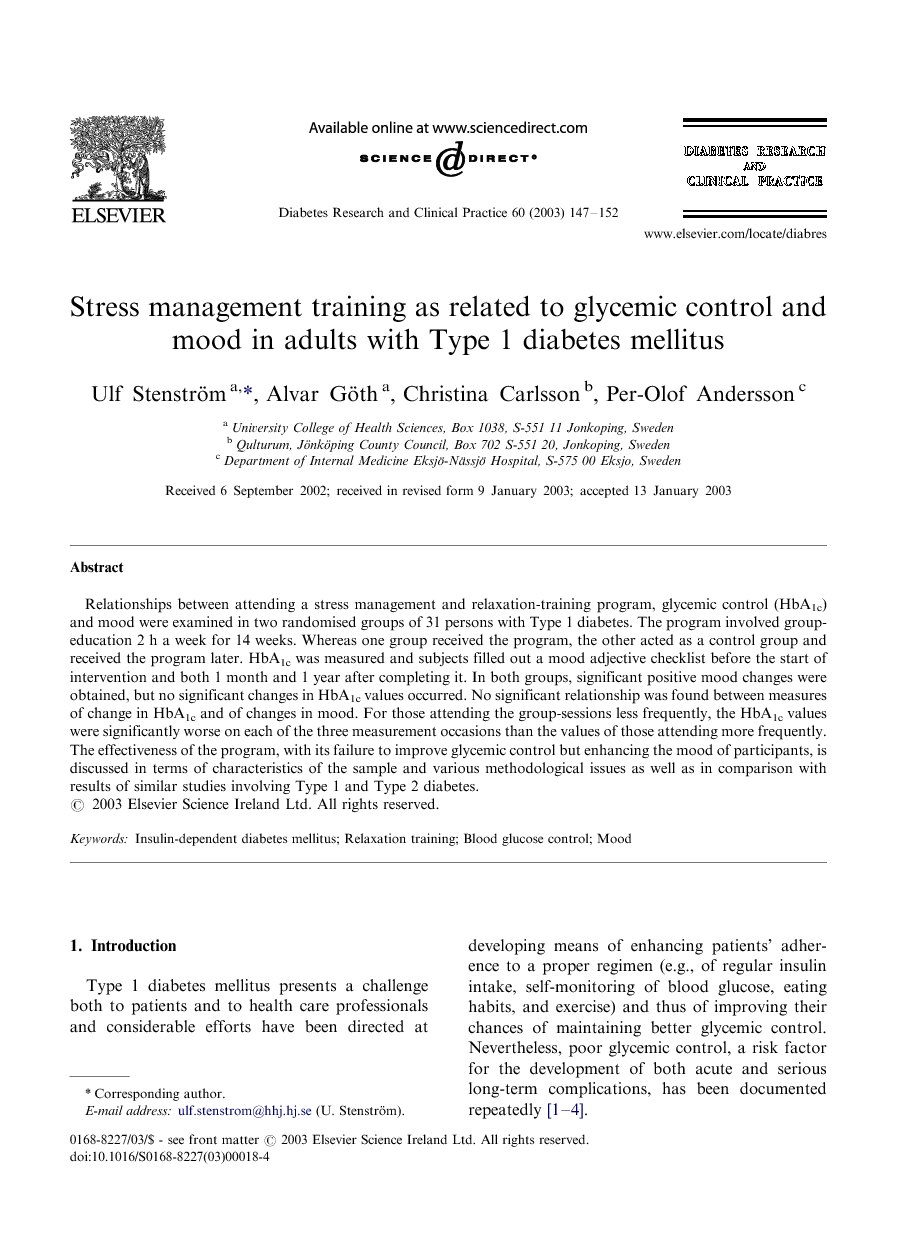 Relationships between attending a stress management and relaxation-training program, glycemic control (HbA1c) and mood were examined in two randomised groups of 31 persons with Type 1 diabetes. The program involved group-education 2 h a week for 14 weeks. Whereas one group received the program, the other acted as a control group and received the program later. HbA1c was measured and subjects filled out a mood adjective checklist before the start of intervention and both 1 month and 1 year after completing it. In both groups, significant positive mood changes were obtained, but no significant changes in HbA1c values occurred. No significant relationship was found between measures of change in HbA1c and of changes in mood. For those attending the group-sessions less frequently, the HbA1c values were significantly worse on each of the three measurement occasions than the values of those attending more frequently. The effectiveness of the program, with its failure to improve glycemic control but enhancing the mood of participants, is discussed in terms of characteristics of the sample and various methodological issues as well as in comparison with results of similar studies involving Type 1 and Type 2 diabetes.

Type 1 diabetes mellitus presents a challenge both to patients and to health care professionals and considerable efforts have been directed at developing means of enhancing patients’ adherence to a proper regimen (e.g., of regular insulin intake, self-monitoring of blood glucose, eating habits, and exercise) and thus of improving their chances of maintaining better glycemic control. Nevertheless, poor glycemic control, a risk factor for the development of both acute and serious long-term complications, has been documented repeatedly [1], [2], [3] and [4]. In recent years psychosocial factors have been recognized as being important both for adherence to the diabetes regimen and for glycemic control [5]. Stress, for example, has been found in several studies to be related to poor glycemic control [6], [7], [8] and [9]. The mechanisms involved in the relationship between stress and glycemic control have been proposed to be of partly psychological and partly physiological origin. Stress can have a negative impact on mood and thus disrupt behaviors of importance for managing the diabetes regimen. Concerning physiological mechanisms, on the other hand, there is accumulating evidence that stress can have stimulatory effects on insulin antagonists such as cortisol, adrenaline, glucagon and growth hormone [10] and [11]. Due to suggested links between stress and glycemic control, the ability to handle stress in daily life appears to be important for persons with diabetes as regards both the disease and general well being. The aim of the present study was to examine the impact of a stress management and relaxation-training program on glycemic control and mood in adult out-patients with Type 1 diabetes.

Towards the end of the 1960s, interest in the effect of various procedures for achieving relaxation increased and studies that followed showed there to be a variety of techniques that produced changes in the body opposite to those produced in response to stress. Although the physiological basis for relaxation therapy is poorly understood, it has been shown to decrease sympathetic nervous system activity [18], [19] and [20] suggesting that therapy of this sort can have a beneficial effect on the metabolic control of diabetes and can be of value in diabetes management. However, some studies, primarily of Type 2 diabetic subjects have shown relaxation training to have a beneficial effect on metabolic control [21], [22] and [23], others, and most of those of Type 1 diabetic subjects, have revealed no, or inconsistent effects [24], [25], [26], [27], [28], [29] and [30]. In the present study, our Type 1 diabetes participants exhibited no improvement in glycemic control but their state of mood was enhanced. Despite their displaying a rather neutral to positive mood before the intervention began, participants became still more satisfied, happy, optimistic, and self-confident after the program was completed, and their positive social orientation also increased—improvements that were still evident a year after completing the program. For the domain of relaxation/tension, the domain in which our subjects exhibited the poorest values before the start of the intervention, the development for the better over the study period was most dominant. An increase in well being, a state of mind to be expected when one's mood changes for the better, as it quite obviously did for our participants, is of considerable value in itself and provides a major justification for the use of stress management techniques in health settings. The failure of a positive effect on glycemic control to be shown in this and similar studies does not speak against the wider use of such techniques in health settings, however, since glycemic control is only one of various important outcomes in diabetes care. Several explanations for stress management training's failing to affect glycemic control could be suggested. Several of the subjects taking part in the present study showed fairly acceptable glycemic control at the start of the program. A further decrease in HbA1c may, for some of them, have been associated with an increase in the frequency of serious episodes of hypoglycemia—a matter which, also considering a ‘floor-effect’, may help explain there being no decrease in HbA1c in the course of the study. However, other reasons for the lack of any relationship between relaxation training and glycemic control could be suggested. One result of the study that was rather notable and which may throw some light on the power of the program in enhancing glycemic control was that those who attended the 14 group-sessions less often exhibited poorer HbA1c values, both before the start of the intervention and at later follow-ups, than those who attended more—results that, taken as a whole, can be interpreted as expressing greater difficulties of general adherence on the part of those attending less. In addition to these suggestions are results that may contribute to explain the inconsistencies found in similar studies, showing highly distressed subjects and those who rate their glucose as being more stress responsive to practice relaxation training less than others do [27] and results suggesting that those who exhibit stronger anxiety and greater neuroticism to be those who respond better to relaxation training [28]. Moreover, and in contrast to what one might expect, some individuals appear to show deterioration in glycemic control after relaxation training [28]. Finally, the inconsistencies mentioned in metabolic response to relaxation training suggests, as Feinglos et al. indicate [24], that glycemic control tends to be considerably more labile in persons with Type 1 diabetes in whom fluctuations due to the effects of insulin, diet, and exercise tend to be greater. In summary, the present findings together with findings reported by others, suggest that relaxation training, when used as a general therapeutic tool, may not enhance metabolic control in persons with Type 1 diabetes. Nevertheless, the present results suggest that an increase in such feelings as those of self-confidence, relaxation, happiness, and optimism can contribute to better well being and life satisfaction for diabetic subjects and be useful in handling daily stressful situations and the demands of the disease.