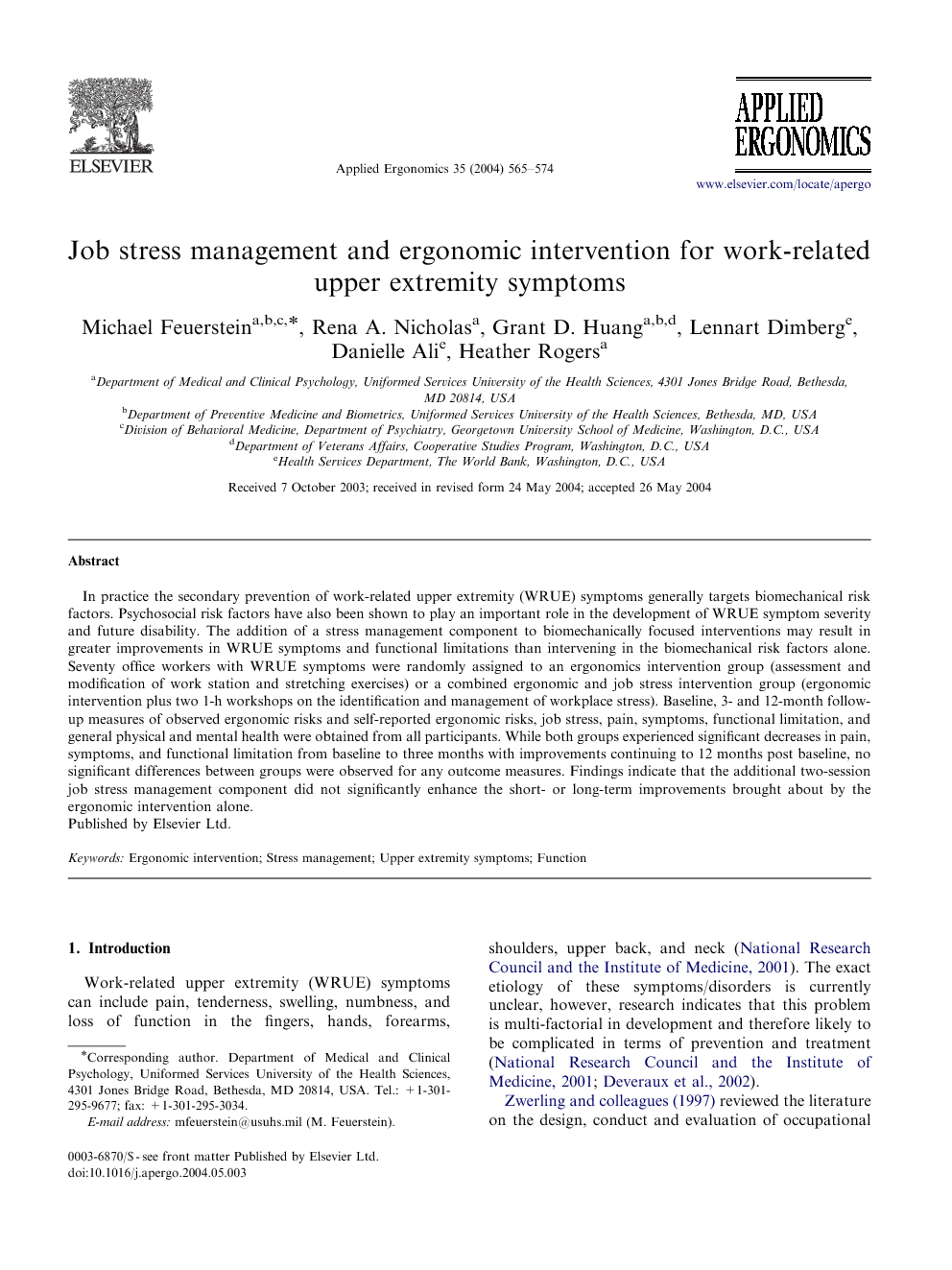 In practice the secondary prevention of work-related upper extremity (WRUE) symptoms generally targets biomechanical risk factors. Psychosocial risk factors have also been shown to play an important role in the development of WRUE symptom severity and future disability. The addition of a stress management component to biomechanically focused interventions may result in greater improvements in WRUE symptoms and functional limitations than intervening in the biomechanical risk factors alone. Seventy office workers with WRUE symptoms were randomly assigned to an ergonomics intervention group (assessment and modification of work station and stretching exercises) or a combined ergonomic and job stress intervention group (ergonomic intervention plus two 1-h workshops on the identification and management of workplace stress). Baseline, 3- and 12-month follow-up measures of observed ergonomic risks and self-reported ergonomic risks, job stress, pain, symptoms, functional limitation, and general physical and mental health were obtained from all participants. While both groups experienced significant decreases in pain, symptoms, and functional limitation from baseline to three months with improvements continuing to 12 months post baseline, no significant differences between groups were observed for any outcome measures. Findings indicate that the additional two-session job stress management component did not significantly enhance the short- or long-term improvements brought about by the ergonomic intervention alone.

The results of the present study indicate that WRUE symptomatic workers who received either the ergonomic intervention or the workstation modification intervention plus an additional two-meeting job stress management component experienced similar long-term improvements (at 3 and 12 months) in upper extremity pain and functional limitations. Improvements in reported generic physical health for both groups did not persist beyond three months. Because of the current emphasis in the literature on the importance of psychosocial factors in the development of WRUE symptom severity and disorders, it had been expected that by addressing both ergonomic and psychosocial job stress risk factors, clinical outcomes would be improved over traditional ergonomic intervention that focuses on adapting the work tasks and the work station to the individual. This hypothesis was not supported in the present study. Positive clinical outcomes were observed in both intervention groups regardless of the additional two-session psychosocial job stress management intervention component. The current results are contrary to Faucett et al. (2002) findings that after 32 weeks there was little improvement in either the ergonomic, cognitive-behavioral educational or biofeedback groups. The present investigation was designed as a randomized secondary prevention trial to examine the effectiveness of an individual-focused job stress management component on specific clinical outcome measures like self-reported pain, functional limitation, physical and mental health, job stress, and self-reported and observable ergonomic risk factors. The intervention was designed for and conducted in a very competitive workplace. Participation in this study was not on company time. The workers in the ergo-stress group agreed to attend the two job stress management meetings on their lunch breaks. It is not clear if extending the job stress management training to five or six weeks would have resulted in a differential group effect as has been shown in other studies with workers with chronic WRUE disorders (Spence, 1989 and Spence, 1991; Feuerstein et al., 1993). However, because of the particular workplace setting of the intervention, adding additional time to the intervention was not practical given the workplace's environment. Although a randomized, controlled trial methodology was used to allocate participants to treatments in the present study, we were unable to include a random sample of all symptomatic workers. Management precluded this possibility. This sampling limitation can result in a sampling bias. It is also possible that the job stress management component would have been effective in improving clinical outcomes given a larger sample. Placebo effects, cannot be ruled out. The attention given to the workers via the modifications of the existing workstations and the presence of the occupational health staff and support at the workplace (i.e., the ergonomics website) may have combined to create a positive outcome for the secondary prevention of WRUE symptoms independent of the job stress management component. Future studies should use larger sample sizes and incorporate wait-listed control groups in order to better determine the impact of psychosocial job stress intervention on WRUE symptom prevention. The purpose of the present study was to systematically evaluate the impact of one type of job stress management intervention component on specific WRUE outcomes in a randomized study conducted in the workplace while addressing as many methodological challenges as possible. The results showed that, in an applied setting, the addition of such a cognitive-behavioral educational component in the form of two 1-h meetings did not result in significant improvement in clinical outcomes compared to an ergonomic intervention alone. A limitation of the study is the absence of a placebo or no treatment control group. Therefore, non-specific effects such as the Hawthorne effect (Demure et al., 2000) or regression to the mean cannot be ruled out as possible explanation for the changes in both groups. The absence of any differences between those who completed the study and those who did not complete the study in terms of socio-demographic and outcome measures suggests that the group that remained in the study was similar to the initial group that met criteria for this study. However, high work commitment, meetings with short notice, and frequent travel seemed to affect adherence and dropout rates in this study. Indeed, commitment to the institution's mission was very high among staff, presenting a challenge for maintaining a healthy balance of work and personal life (Dimberg et al., 2001). This may lead to strong prioritization of work assignments, long working hours and tight deadlines. Such institutional stressors will not be alleviated solely by applying only the strategies taught in the two-meeting job stress management intervention of the present study. Our group has recently investigated specific work organization and job stressors (i.e., time pressure, interpersonal demands) in office workers and found that these factors are associated with UE symptoms (Huang et al., 2003). The present study did not directly modify these stressors. Such an effort might result in improved outcomes. It is also possible that a more focused intervention directed at those factors that are empirically linked to upper extremity symptoms measured at baseline within a specific workforce and workplace could result in improved symptom management. These two intervention options require systematic evaluation. The results of this study may be further enhanced in the future by a focus on specific job stressors and cognitive and behavioral factors that recently have been shown to be specifically related to musculoskeletal health (Feuerstein, 1996; Feuerstein et al., 1999). Recent research suggests that workstyle, or how a person responds to work demands, may be related to upper extremity symptoms (Haufler et al., 2000). A scale has been recently developed that measures different features of workstyle (Feuerstein et al., in press). Coupled with ergonomic changes, interventions that address these specific job factors and work style that maybe triggered by these factors may have greater short- and long-term effects.