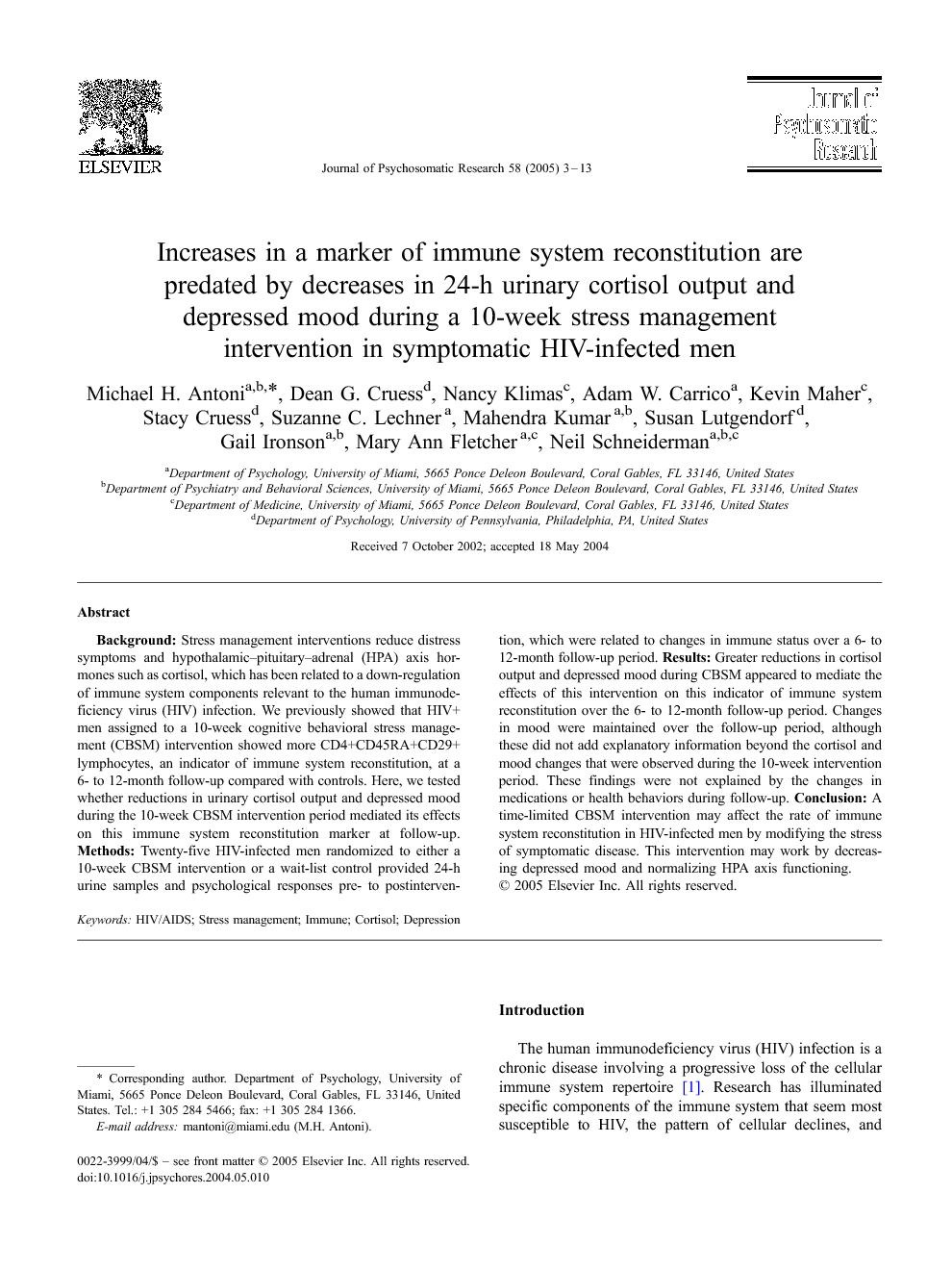 Stress management interventions reduce distress symptoms and hypothalamic–pituitary–adrenal (HPA) axis hormones such as cortisol, which has been related to a down-regulation of immune system components relevant to the human immunodeficiency virus (HIV) infection. We previously showed that HIV+ men assigned to a 10-week cognitive behavioral stress management (CBSM) intervention showed more CD4+CD45RA+CD29+ lymphocytes, an indicator of immune system reconstitution, at a 6- to 12-month follow-up compared with controls. Here, we tested whether reductions in urinary cortisol output and depressed mood during the 10-week CBSM intervention period mediated its effects on this immune system reconstitution marker at follow-up.

The human immunodeficiency virus (HIV) infection is a chronic disease involving a progressive loss of the cellular immune system repertoire [1]. Research has illuminated specific components of the immune system that seem most susceptible to HIV, the pattern of cellular declines, and even provided evidence that these specific components of the immune system may be reconstituted at different rates with successful antiretroviral therapy. We know that while T-helper-inducer (CD3+CD4+) cells show reliable declines with the progression of HIV infection, there appears to be a preferential decline in the naive CD4 T-cell subset (CD4+CD45RA+) over the memory subset (CD4+CD29+; [2] and [3]). This preferential decline in naive CD4+ T-cells appears to be responsible for the disruptions in the cellular immune repertoire for novel antigens, this underlying the increased susceptibility to opportunistic infections and neoplasias [2] and [4]. It is also becoming clear that the sharp rise in CD4+ T-cell counts shortly following the advent of antiretroviral therapy is due primarily to the redistribution of memory CD4+ T-cells, with increases in naive CD4+ T-cells being unlikely for at least several months [5] and [6]. Some have proposed that only these delayed increases in naive CD4+ T-cells occurring after such therapy constitute true “immune reconstitution” [7]. Moreover, incomplete or substantially delayed reconstitution of the T-cell repertoire may actually increase susceptibility to certain neoplasms, such as squamous cell skin cancers, testicular cancer, myeloma, and Hodgkin's disease, among HIV-infected persons receiving antiretroviral therapy [8] and [9]. As naive CD4+ T-cells emerge from the thymus, they express high molecular weight forms of a tyrosine phosphatase identified by CD45RA monoclonal antibodies [10]. Increases in CD4+CD45RA+ cells following antiretroviral therapy may represent cells newly generated by the thymus (i.e., renewed thymopoiesis) or a simple expansion of naive T-cells from the periphery [11] and [12]. One strategy for delineating those naive CD4+ T-cells that are newly differentiated from the thymus is to enumerate “transitional” naive CD4 T-cells—those that are actively converting from a CD45RA+CD29—or “virgin” condition to a CD45RA–CD29+ memory phenotype in response to in vivo stimuli [13]. Because this progression is believed to be unidirectional, increases in transitional naive CD4 T-cells (CD45RA+CD29+) are likely to have come from newly created naive cells rather than from a peripheral expansion of naive phenotype cells that had not been depleted before antiretroviral therapy. No work to date has identified external factors that may contribute to the rate of reconstitution of these naive CD4 T-cells in HIV-infected persons. Given their well-known effects on the cellular immune repertoire, it is plausible that adrenal hormones such as corticosteroids may retard the ability of the immune system to reconstitute naive CD4 T-cells over time in HIV-infected persons. The present study will focus on this question. Recent work suggests that HIV-infected persons show abnormalities in the hypothalamic–pituitary–adrenal (HPA) axis, which may increase with the progression of disease and which favor a shift from Th1- to Th2-like cytokine production [14], [15] and [16]. It is well known that cortisol directly impairs or modifies several components of cellular immunity, including T-lymphocytes [17], macrophages [18], and natural killer (NK) cells [19]. After corticosteroids bind to intracytoplasmic receptors on these cells, the complex travels to the nucleus and binds to DNA sequences that control glucocorticoid-regulated transcription genes for functions such as cytokine synthesis and apoptosis [20] and [21]. Among HIV-infected persons, elevations in peripheral cortisol levels are associated with lower T-helper-inducer cell counts [16]. Cortisol also appears to promote decreases in the production of Th1-like cytokines, such as interleukin-2 (IL-2), while promoting production of Th2-like cytokines, such as IL-4 and IL-10 [21]. Cortisol can induce programmed cell death in mature lymphocytes as well [14] and [22]. However, nothing is known about cortisol's effects on naive CD4 T-cell reconstitution over time. HIV-infected persons may experience abnormal HPA axis functioning, in part, due to the chronic stressors that they must deal with, their increased prevalence of depressed mood, and multiple bereavements and other personal losses [23], [24] and [25]. These stressful experiences and mood disturbances may contribute to the elevated urinary output of cortisol [26], [27] and [28]. An accumulating stress burden due to the lack of mastery over daily stressors, with associated HPA hormone elevations [29], may alter homeostatic mechanisms within the HPA axis that have important implications for HIV+ persons [14]. Such physiologic changes may mediate the documented immunologic deficits associated with some of these psychosocial phenomena in healthy and HIV-infected persons [30] and [31]. Stress management techniques teach people more efficient methods for coping with stressors, reduce depressed mood, and may also normalize cortisol output that may occur during stressful periods [32], [33], [34] and [35]. Improvements in depressed mood [36], [37], [38] and [39] have been demonstrated in HIV-infected persons with a number of time-limited group-based interventions. Decreases in depressed mood during such interventions have been shown to predict slower rates of T-helper-inducer cell (CD3+CD4+) declines and clinical disease progression over a 2-year period [40]. Little is known about the possible neuroendocrine changes occurring with these intervention-associated improvements in depressed mood that might influence the reconstitution of naive CD4+ T-cells. Previously, we monitored levels of transitional naive T-cells (CD4+CD45RA+CD29+) following cognitive behavioral stress management (CBSM) intervention in HIV-infected gay men dealing with the stress of symptomatic disease and found that men assigned to CBSM showed greater numbers of transitional naive T-cells compared with controls at 12-month follow-up [41]. The present study sought to examine possible mechanisms to explain these effects. To test a psychoneuroimmunological (PNI) model underlying this research, we related reductions in 24-h urinary-free cortisol output and depressed mood during the 10-week intervention to the magnitude of immune reconstitution over this 6- to 12-month follow-up period among participants in the initial study who were willing to be contacted and returned to our facility. We hypothesized that the intervention's effects on immune system reconstitution over the follow-up period would be explained by decreased depressed mood and cortisol output during the intervention period. To investigate alternative mechanisms, we also examined the contribution of changes in mood, medication regimen, and health behaviors over the follow-up period.