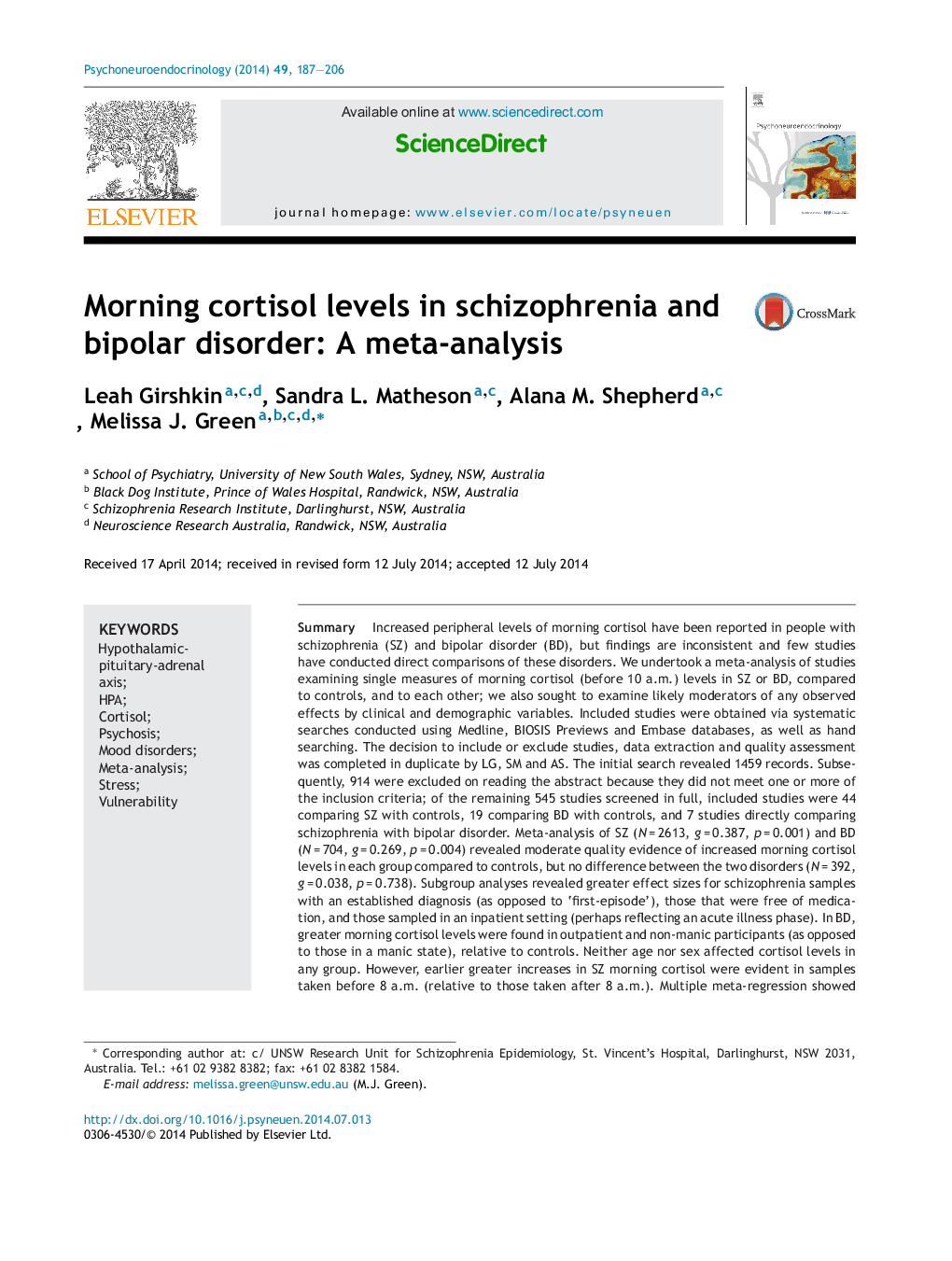 Increased peripheral levels of morning cortisol have been reported in people with schizophrenia (SZ) and bipolar disorder (BD), but findings are inconsistent and few studies have conducted direct comparisons of these disorders. We undertook a meta-analysis of studies examining single measures of morning cortisol (before 10 a.m.) levels in SZ or BD, compared to controls, and to each other; we also sought to examine likely moderators of any observed effects by clinical and demographic variables. Included studies were obtained via systematic searches conducted using Medline, BIOSIS Previews and Embase databases, as well as hand searching. The decision to include or exclude studies, data extraction and quality assessment was completed in duplicate by LG, SM and AS. The initial search revealed 1459 records. Subsequently, 914 were excluded on reading the abstract because they did not meet one or more of the inclusion criteria; of the remaining 545 studies screened in full, included studies were 44 comparing SZ with controls, 19 comparing BD with controls, and 7 studies directly comparing schizophrenia with bipolar disorder. Meta-analysis of SZ (N = 2613, g = 0.387, p = 0.001) and BD (N = 704, g = 0.269, p = 0.004) revealed moderate quality evidence of increased morning cortisol levels in each group compared to controls, but no difference between the two disorders (N = 392, g = 0.038, p = 0.738). Subgroup analyses revealed greater effect sizes for schizophrenia samples with an established diagnosis (as opposed to ‘first-episode’), those that were free of medication, and those sampled in an inpatient setting (perhaps reflecting an acute illness phase). In BD, greater morning cortisol levels were found in outpatient and non-manic participants (as opposed to those in a manic state), relative to controls. Neither age nor sex affected cortisol levels in any group. However, earlier greater increases in SZ morning cortisol were evident in samples taken before 8 a.m. (relative to those taken after 8 a.m.). Multiple meta-regression showed that medication status was significantly associated with morning cortisol levels in SZ, when the effects of assay method, sampling time and illness stage were held constant. Heightened levels of morning cortisol in SZ and BD suggest long-term pathology of the hypothalamic-pituitary-adrenal (HPA) axis that may reflect a shared process of illness development in line with current stress-vulnerability models.