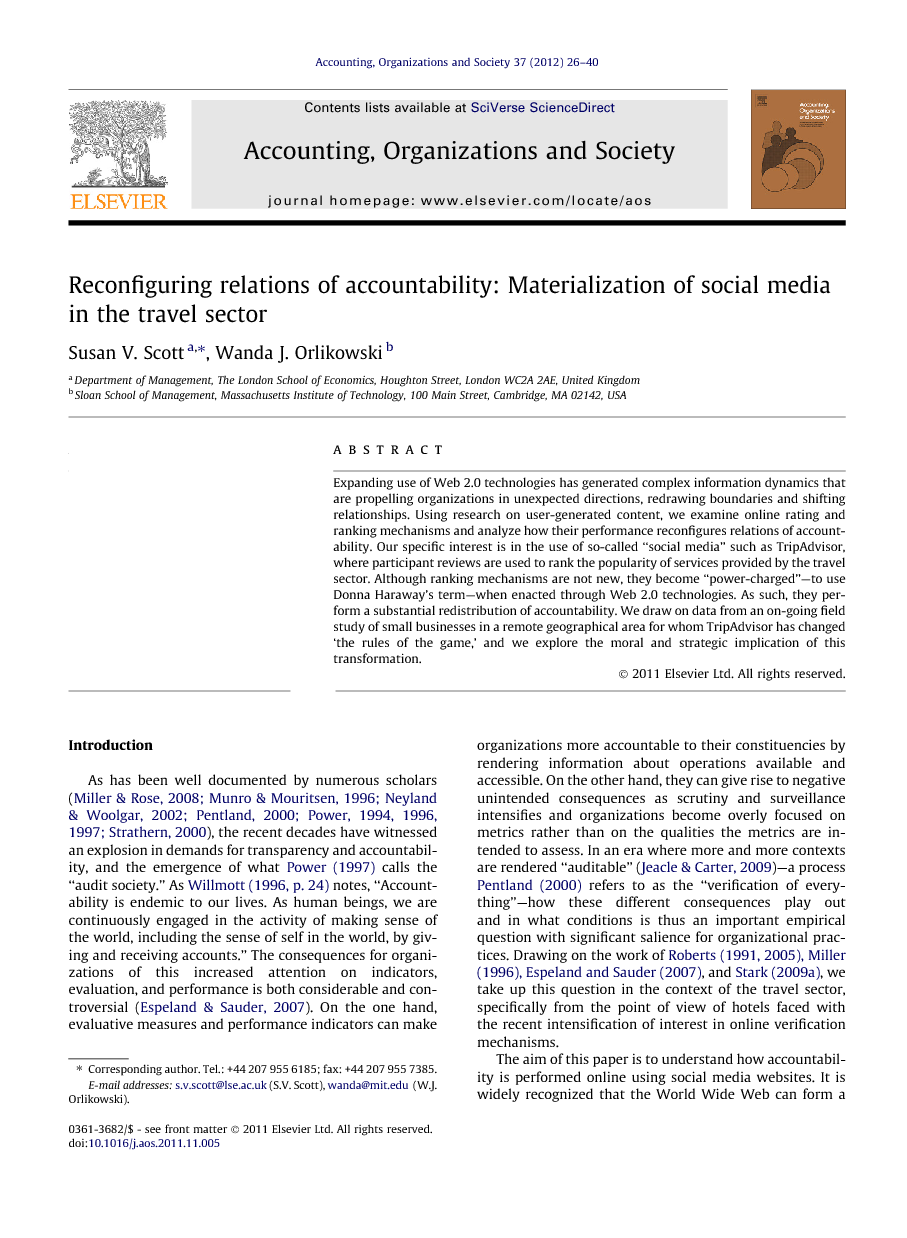 Expanding use of Web 2.0 technologies has generated complex information dynamics that are propelling organizations in unexpected directions, redrawing boundaries and shifting relationships. Using research on user-generated content, we examine online rating and ranking mechanisms and analyze how their performance reconfigures relations of accountability. Our specific interest is in the use of so-called “social media” such as TripAdvisor, where participant reviews are used to rank the popularity of services provided by the travel sector. Although ranking mechanisms are not new, they become “power-charged”—to use Donna Haraway’s term—when enacted through Web 2.0 technologies. As such, they perform a substantial redistribution of accountability. We draw on data from an on-going field study of small businesses in a remote geographical area for whom TripAdvisor has changed ‘the rules of the game,’ and we explore the moral and strategic implication of this transformation.

As has been well documented by numerous scholars (Miller and Rose, 2008, Munro and Mouritsen, 1996, Neyland and Woolgar, 2002, Pentland, 2000, Power, 1994, Power, 1996, Power, 1997 and Strathern, 2000), the recent decades have witnessed an explosion in demands for transparency and accountability, and the emergence of what Power (1997) calls the “audit society.” As Willmott (1996, p. 24) notes, “Accountability is endemic to our lives. As human beings, we are continuously engaged in the activity of making sense of the world, including the sense of self in the world, by giving and receiving accounts.” The consequences for organizations of this increased attention on indicators, evaluation, and performance is both considerable and controversial (Espeland & Sauder, 2007). On the one hand, evaluative measures and performance indicators can make organizations more accountable to their constituencies by rendering information about operations available and accessible. On the other hand, they can give rise to negative unintended consequences as scrutiny and surveillance intensifies and organizations become overly focused on metrics rather than on the qualities the metrics are intended to assess. In an era where more and more contexts are rendered “auditable” (Jeacle & Carter, 2009)—a process Pentland (2000) refers to as the “verification of everything”—how these different consequences play out and in what conditions is thus an important empirical question with significant salience for organizational practices. Drawing on the work of Roberts, 1991, Roberts, 2005, Miller, 1996 and Espeland and Sauder, 2007, and Stark (2009a), we take up this question in the context of the travel sector, specifically from the point of view of hotels faced with the recent intensification of interest in online verification mechanisms. The aim of this paper is to understand how accountability is performed online using social media websites. It is widely recognized that the World Wide Web can form a key part of processes that give local phenomena greater scale, scope and reach but this is where many studies end. We need to move beyond the hubris and speculation that surrounded the emergence of the web to examine empirical-founded implications and reconsider the boundaries of the debate. To this end, we move the discussion surrounding its consequences to include the material grounds of performed accountability. The use of online verification mechanisms is a recent development, emerging out of the evolution over the past decade of so-called Web 2.0 technologies1—technologies that facilitate active participation in websites on the part of the users. These web technologies are in specific contrast to the prior Web 1.0 technologies, which facilitated largely one-way information publication and distribution with limited opportunities for user engagement and interaction. Web 2.0 technologies have also come to be known as “social media,” highlighting their central distinguishing feature—the active creation of content by their users or members. A variety of social media websites have emerged and while these categories overlap, they highlight differences in the website’s primary purpose: content development (e.g., websites such as Wikipedia and Digg), networking where members build and maintain relationships with friends or colleagues (e.g., websites such as Facebook and LinkedIn), and common interest where participants with similar interests can share ideas, views, and information (e.g., websites such as Epinions and TripAdvisor). Our focus on this paper is on the third type of social media, the common interest website. A characteristic aspect of common interest social media websites is the active, online sharing of recommendations, reviews, and advice among users that assess and rank the quality of a range of products and services such as books (Amazon), movies (Netflix), home services (AngiesList), healthcare (PatientsLikeMe), teachers (RateMyProfessor), and many more. The novelty of these websites, as Dellarocas (2003, p. 1407) notes, is that they enable individuals to “make their personal thoughts, reactions and opinions easily accessible to the global community.” The convergence of increasing demands for accountability and transparency with the rise of social media and user-generated content creates a powerful combination. While public measures of performance and ranking mechanisms are not new, they become “power-charged”—to use Haraway’s (1988) term—when enacted through Web 2.0 technologies. In this paper, we focus specifically on TripAdvisor2 where members share tips and post reviews of travel destinations, which are then used by the website infrastructure to rank the popularity and quality of services provided by the travel sector. One of TripAdvisor’s defining tag lines is “Get the truth, then go”. We examine the production and entailments of TripAdvisor’s “truth,” and consider how the knowledge produced through the website’s dynamic ranking mechanism performs a substantial redistribution of accountability. We conclude by discussing some of the implications of such a shift in accountability. Before turning to the travel sector and the expanding use of online reviews, we first discuss accountability and why considerations of accountability have taken on such a particular resonance in the contemporary information age.

In this paper we have explored the notion of accountability and grounded our discussion in data from ongoing research on social media in the travel sector, or so-called “Travel 2.0.” The particular focus has been ratings and rankings associated with user-generated content about privately-owned guest accommodation on TripAdvisor. We have been particularly interested in understanding how accountability is performed online on social media websites. Our findings highlight that online accountability redistributes relations of accountability that overflow static impact factors used by more traditional research to measure the impacts of technological innovations. On a more generative note, we have developed our analysis of social media – specifically the emergence of TripAdvisor in the travel sector – not so much to impose moral order on a situation but to create a “telling moment” (Suchman, 2011) in which we pause to consider the “practical reconciliation” (Roberts, 1991, p. 367) of the moral and strategic cuts that have been produced by online reviewing and ranking. In so doing, we call out sociomaterial entanglements and raise for discussion the intricate boundaries that are made between accounts of travel, forms of accountability, and “response-ability” (Haraway, 2008). Online accountability is based on special claims of the “wisdom of crowds” and “collective intelligence” produced by social media (Benkler, 2006 and Surowiecki, 2004). The very term “social media” seems to soften or hide the fragmented and fragile nature of online rankings, even in the face of emerging debate. TripAdvisor rankings achieve a kind of legitimacy through claims to be organic, fresh, and open. TripAdvisor’s specific material configuration re-draws vertical and lateral accountabilities in a way that produces a form of transparency for reviews while obscuring the crucial ranking mechanism at work. On TripAdvisor the algorithm “is pervasive but its origins and locus ambiguous”, thus illustrating that the power of ranking is its capacity to present itself as objective fact, to reflect the truth, imposing “its way of seeing, without being seen” (Roberts, 1991, p. 359). By refusing to allow insight into the algorithms, TripAdvisor effectively reinstates the patriarchal dependency from which they claim to have rescued the worlds of travel. TripAdvisor is credited with making travel writing accessible to all and breaking through bland, misleading public relations in the tourism and hospitality sector. It is argued to create a sense of shared experiences, but this is not a solely social phenomenon nor is its role in the sector adequately captured by the suggestion that it provides entertainment media for travellers. Each element referred to in the millions of online reviews is in relation to a particular world of grounded consequences beyond it. TripAdvisor has material effects on business and management. Indeed for some tourism and hospitality enterprises, such accountability can mean the difference between profit and loss, surviving a season or deciding to close down. It is thus necessary to take seriously the particular configuration of relational accountability that is performed through TripAdvisor. A further feature characterizing relational accountability is objectification, and the apparently “veridical knowledge” that is achieved in the process (Miller & Rose, 2008, p. 23). Practices of detachment and objectification are an integral part of knowledge production within online review sites such as TripAdvisor. The travel knowledge produced here is held up as technical in nature, unbiased, and constituted by claims to legitimate collective process. The quasi-formalized knowledge that emerges provides a common currency or vocabulary for communicating and regulating choices and actions, such as the risks and rewards of performance assessment. The outcome is a “new species of authority” that is addressed to the practice of living (Miller & Rose, 2008, p. 23). This serves as a stable basis for conduct even though it is thoroughly dependent upon databases and algorithms that are continually updated and management practices in contexts that are highly dynamic. The question is how does this performance of veridical knowledge come to constitute organizational practices (and recursively act upon them)? Much future research is needed here. Particularly valuable would be research that further explores reconfiguring relations of accountability with particular emphasis on the novel online domains that are increasingly saturating practices within contemporary society, and helping to propagate transparency and amplify the logic of auditability. While new and different forms of accountability inspire new ways to conduct practices, these innovations are not without material consequences. We may not be able to control this process, indeed we cannot, but we can think about how to proceed in a responsible way. As Stark (2009a, p. 202) notes, one who is accountable to many in different registers can be one who is accountable to none. How and where accountability is performed online is thus a critical ongoing empirical question. In this paper, we have only laid out possible contours and signposts for approaching such a question by highlight the sociomateriality of accountability and its performative consequences. This is a case of accounting for how matter “matters”—to invoke a recent call by Barad (2003). Such a consideration becomes particularly important when the phenomenon in question permeates contemporary culture in a way that may divert our gaze; it is hard to think about ontological politics when you are having fun!