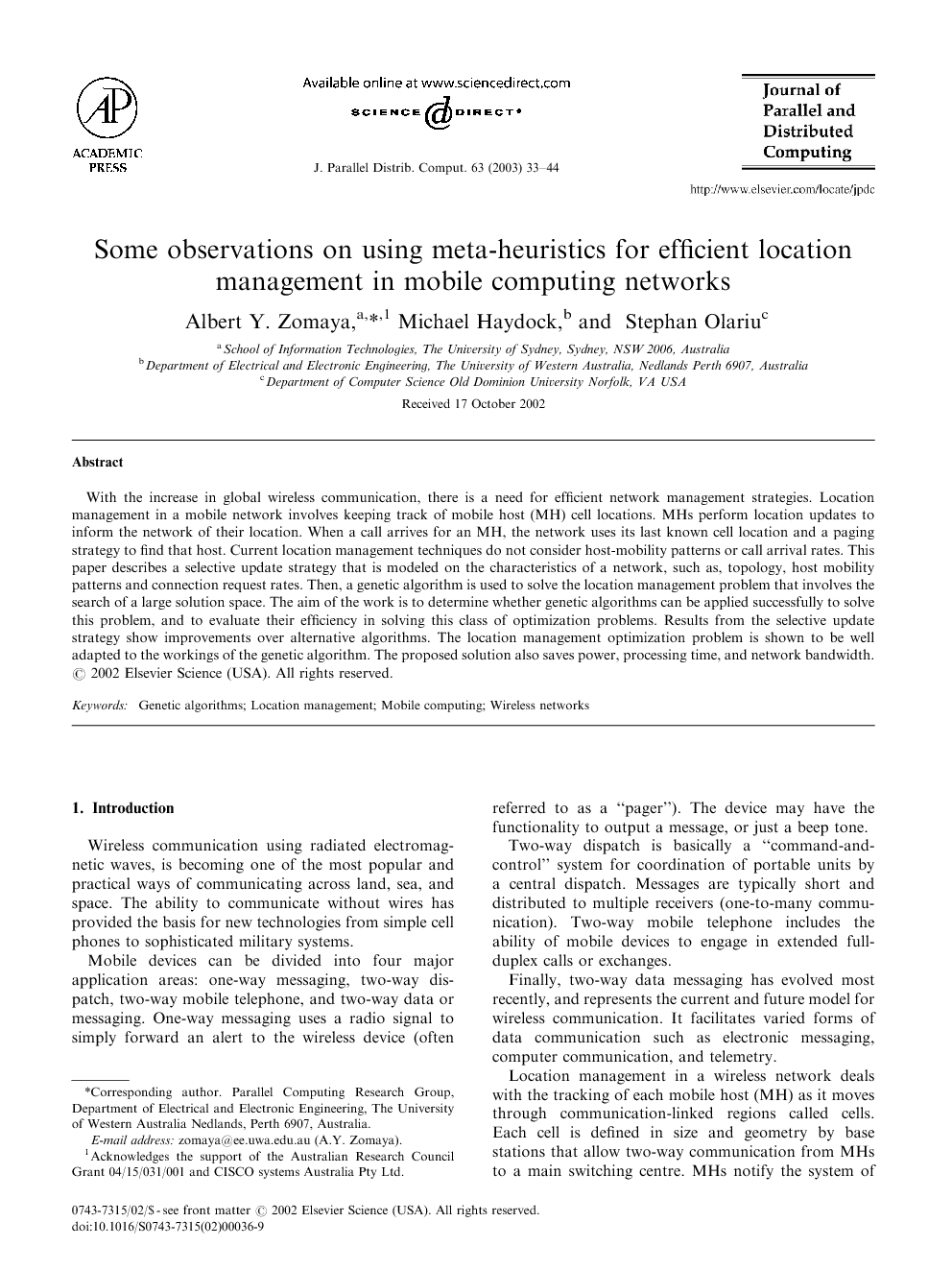 With the increase in global wireless communication, there is a need for efficient network management strategies. Location management in a mobile network involves keeping track of mobile host (MH) cell locations. MHs perform location updates to inform the network of their location. When a call arrives for an MH, the network uses its last known cell location and a paging strategy to find that host. Current location management techniques do not consider host-mobility patterns or call arrival rates. This paper describes a selective update strategy that is modeled on the characteristics of a network, such as, topology, host mobility patterns and connection request rates. Then, a genetic algorithm is used to solve the location management problem that involves the search of a large solution space. The aim of the work is to determine whether genetic algorithms can be applied successfully to solve this problem, and to evaluate their efficiency in solving this class of optimization problems. Results from the selective update strategy show improvements over alternative algorithms. The location management optimization problem is shown to be well adapted to the workings of the genetic algorithm. The proposed solution also saves power, processing time, and network bandwidth.

Wireless communication using radiated electromagnetic waves, is becoming one of the most popular and practical ways of communicating across land, sea, and space. The ability to communicate without wires has provided the basis for new technologies from simple cell phones to sophisticated military systems. Mobile devices can be divided into four major application areas: one-way messaging, two-way dispatch, two-way mobile telephone, and two-way data or messaging. One-way messaging uses a radio signal to simply forward an alert to the wireless device (often referred to as a “pager”). The device may have the functionality to output a message, or just a beep tone. Two-way dispatch is basically a “command-and-control” system for coordination of portable units by a central dispatch. Messages are typically short and distributed to multiple receivers (one-to-many communication). Two-way mobile telephone includes the ability of mobile devices to engage in extended full-duplex calls or exchanges. Finally, two-way data messaging has evolved most recently, and represents the current and future model for wireless communication. It facilitates varied forms of data communication such as electronic messaging, computer communication, and telemetry. Location management in a wireless network deals with the tracking of each mobile host (MH) as it moves through communication-linked regions called cells. Each cell is defined in size and geometry by base stations that allow two-way communication from MHs to a main switching centre. MHs notify the system of their position “location update”. Location updates have an associated cost composed of several factors such as bandwidth usage, power dissipation, and processing time. When a call arrives for an MH, the last known cell location is paged (paging also has an associated cost). If the MH performs location update at a high rate, a low number of pages is required to locate that MH when needed. A balance may be found between location update and paging so that the wireless network has a lower overall cost of location management. With the dramatic increase in wireless availability and use, the need for efficient location management has become more important. The current technology has not yet evolved to a stage where location-tracking overhead is negligible. That is, the costs of location management are high enough to warrant investigation of new paradigms in this area. Few existing location management techniques consider the composition and state of the network they oversee. There are four common update schemes that can use time, movement, distance, and zones to determine when to update. These and other methods of location management suffer from the following drawbacks: • generalized assumption of cell geometry and topology, • inaccurate host mobility models, • insensitive to paging costs and call arrival rates, • global tracking schemes for large networks are inefficient and cause stress on the high-level wire-line network. The goal of the paper is to determine whether a genetic algorithm is capable to generate efficient solutions that reduce Location management costs (LMCs). This can be achieved by the following process: implement a flexible and extensible wireless network model, design a genetic algorithm, generate solutions that may be practically implemented in a wireless network, incorporate network state and topology (among other factors) into the optimization problem, calculate the average LMC given a suitable user mobility model, compare the results and performance of the genetic algorithm to other location management techniques, and finally, draw conclusions as to whether genetic algorithms are useful in delivering cost effective location management solutions. The location management problem is introduced in Section 2. Section 3 provides a brief discussion of genetic algorithms. The proposed genetic algorithm-based approach is presented in 4 and 5 that describe how the mobile network was designed and implemented. This is followed by results and conclusions in 6 and 7.

The goal of this work was to determine whether a genetic algorithm could be effectively applied to the LMC minimization problem. Existing techniques in this area of wireless networks are not optimized, although designed to minimize mobility management overhead. The motivation was that few methods use the network state and topology as dynamic inputs to the location management scheme [2], [5], [14] and [15]. Most techniques use a combination of distance, time, movement and zoned-based location update. The method presented in this paper uses MH mobility and call arrival patterns to minimize LMCs. The basis of the location management problem is that the location update and paging processes are not independent. Hence a solution could be designed that found a balance between the two. A genetic algorithm was chosen for this task, as it was likely to perform well on the problem. In order to achieve the goals of the project, a mobile networking class was first implemented. This formed the basis for all subsequent work, including the genetic algorithm design. The genetic algorithm design formed the majority of the work in this paper, particularly development of the fitness function. The reason for this is that instead of requiring the solutions produced by the genetic algorithm to be tested under simulation, the fitness function was the simulator. It tested the average performance of solutions under specific network conditions. The results demonstrate that a genetic algorithm can be used to minimize LMCs in a wireless network. The selective update technique also saves bandwidth, is more efficient (fewer connections) and saves processing time (hence electrical power) on MHs. The results of the genetic algorithm compared well against simple update schemes. The foundations now exist for a comparison to fully implemented network models (e.g. GSM), using third party network simulation software. The genetic algorithm was also shown to perform well in terms of speed and efficiency when compared to a random search. The current limitations of the system are that location update schemes are applied to all MHs. This means the average optimal scheme may work well for most MHs, but not all. For example, if an MH has different characteristics (speed, etc.) it may be adversely affected by the enforced update scheme. The feasibility of host-unique update schemes would need thorough investigation (including simulation to replicate additional messaging). Although it would be easy to generate update schemes for unique hosts, the maintenance and control cost of such a scheme may prove expensive. It has been shown in [9] that a distance-based update scheme performs better than time- and movement-based schemes. However, deployment of a distance scheme would be difficult. For example, in a distance-based scheme, an MH would continually have to monitor its distance from the last update location and compare it with a threshold to decide whether to update or not. This would require more intelligent MHs, along with higher power usage and processing time. The location management strategy presented in this paper, does not have any of these disadvantages, and offers a practical solution to the location management problem.