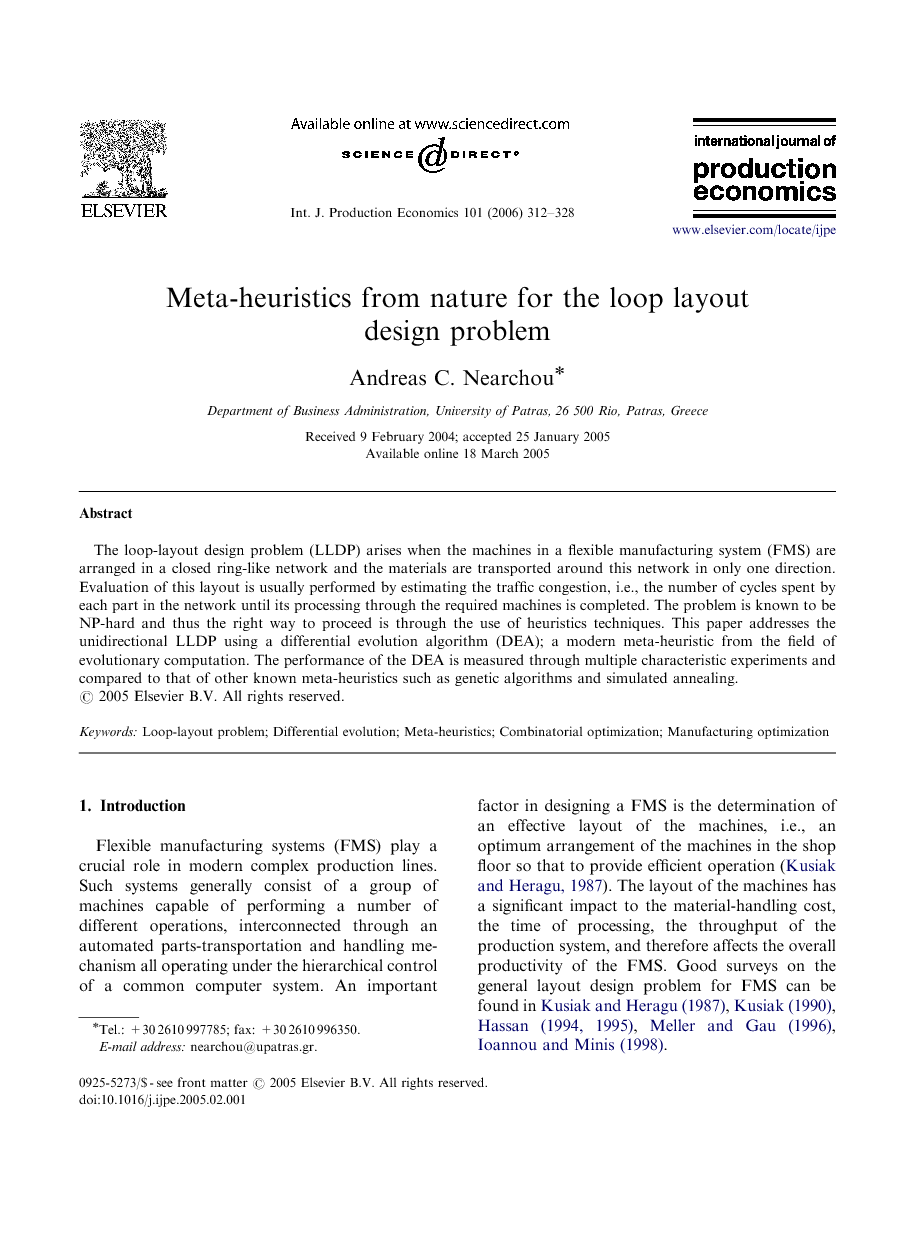 The loop-layout design problem (LLDP) arises when the machines in a flexible manufacturing system (FMS) are arranged in a closed ring-like network and the materials are transported around this network in only one direction. Evaluation of this layout is usually performed by estimating the traffic congestion, i.e., the number of cycles spent by each part in the network until its processing through the required machines is completed. The problem is known to be NP-hard and thus the right way to proceed is through the use of heuristics techniques. This paper addresses the unidirectional LLDP using a differential evolution algorithm (DEA); a modern meta-heuristic from the field of evolutionary computation. The performance of the DEA is measured through multiple characteristic experiments and compared to that of other known meta-heuristics such as genetic algorithms and simulated annealing.

In this study, a DEA was proposed for the solution of the unidirectional loop layout design problem (LLDP). Two types of the basic LLDP were examined, named MIN–SUM and MIN–MAX, respectively. The objective with the former is the minimization of the total number of cycles spent by all parts in the loop network of the machines. While, the objective with the latter is the minimization of the maximum number of cycles spent by parts of the same family until the completion of their processing in the loop. Experimental comparisons over a large set of randomly generated test problems show that the proposed DEA is superior to previous existing meta-heuristics approaches, such as GAs and simulated annealing algorithms. Future work will investigate the application of the DEA to other types of layout design problems such as the single-row, and the multiple-row layout design problems. Furthermore, the investigation of the DEA in situations with uncertainty in the design phase of the machine layout problem is a second idea of future research. For instance, in real-world manufacturing there are cases where the value for the clearance between any pair of adjacent machines may be hardly provided with precision. Hybridizing the DEA with fuzzy systems is perhaps a promising area to start with and may result to a more robust optimization tool. Finally, another direction of future work is to incorporate the algorithm in a general optimization tool and integrate it with existing CAD or CIM software tools in order to be used in layout design and scheduling applications of a real-world facility floor.