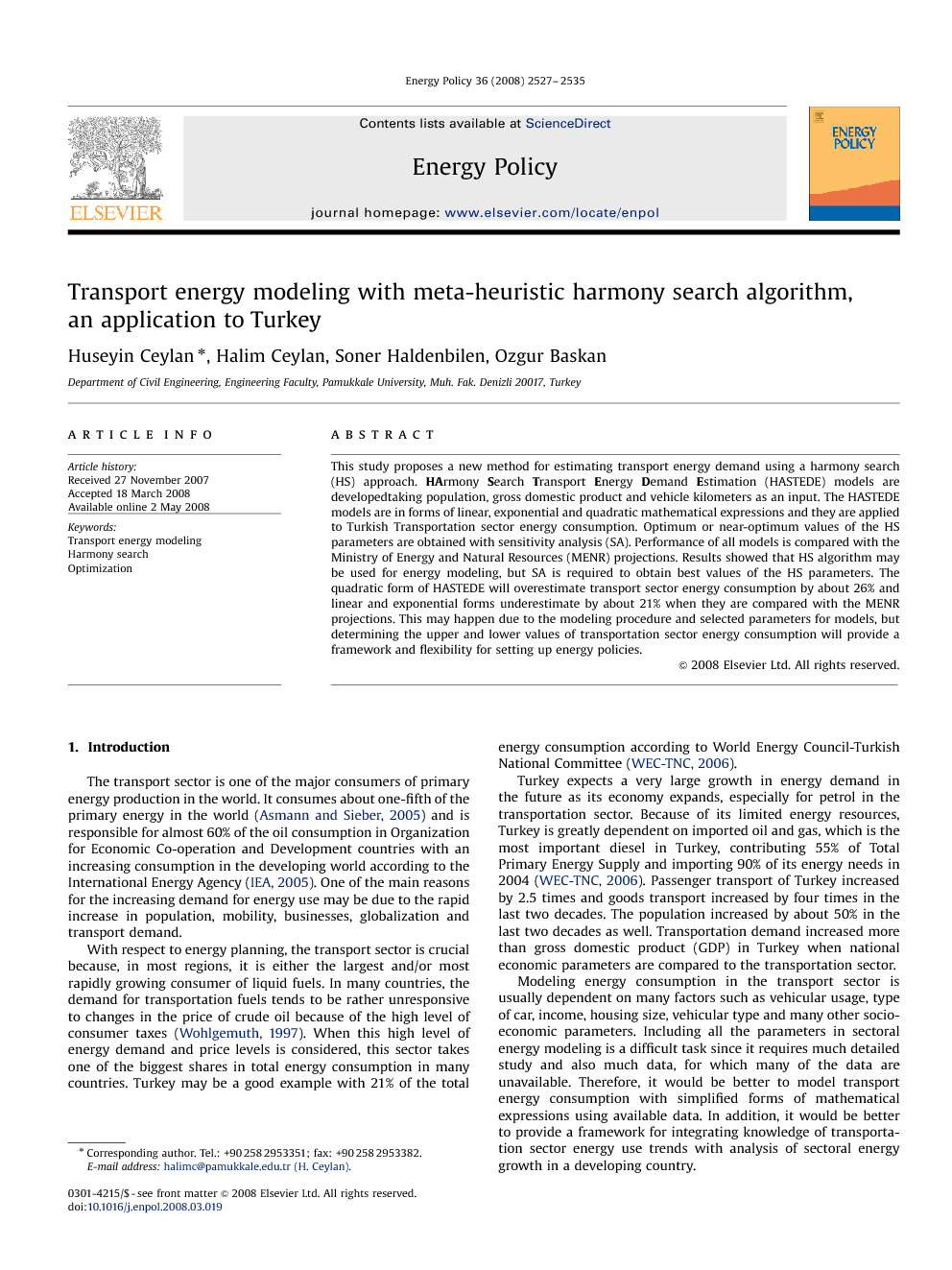 This study proposes a new method for estimating transport energy demand using a harmony search (HS) approach. HArmony Search Transport Energy Demand Estimation (HASTEDE) models are developedtaking population, gross domestic product and vehicle kilometers as an input. The HASTEDE models are in forms of linear, exponential and quadratic mathematical expressions and they are applied to Turkish Transportation sector energy consumption. Optimum or near-optimum values of the HS parameters are obtained with sensitivity analysis (SA). Performance of all models is compared with the Ministry of Energy and Natural Resources (MENR) projections. Results showed that HS algorithm may be used for energy modeling, but SA is required to obtain best values of the HS parameters. The quadratic form of HASTEDE will overestimate transport sector energy consumption by about 26% and linear and exponential forms underestimate by about 21% when they are compared with the MENR projections. This may happen due to the modeling procedure and selected parameters for models, but determining the upper and lower values of transportation sector energy consumption will provide a framework and flexibility for setting up energy policies.

The transport sector is one of the major consumers of primary energy production in the world. It consumes about one-fifth of the primary energy in the world (Asmann and Sieber, 2005) and is responsible for almost 60% of the oil consumption in Organization for Economic Co-operation and Development countries with an increasing consumption in the developing world according to the International Energy Agency (IEA, 2005). One of the main reasons for the increasing demand for energy use may be due to the rapid increase in population, mobility, businesses, globalization and transport demand. With respect to energy planning, the transport sector is crucial because, in most regions, it is either the largest and/or most rapidly growing consumer of liquid fuels. In many countries, the demand for transportation fuels tends to be rather unresponsive to changes in the price of crude oil because of the high level of consumer taxes (Wohlgemuth, 1997). When this high level of energy demand and price levels is considered, this sector takes one of the biggest shares in total energy consumption in many countries. Turkey may be a good example with 21% of the total energy consumption according to World Energy Council-Turkish National Committee (WEC-TNC, 2006). Turkey expects a very large growth in energy demand in the future as its economy expands, especially for petrol in the transportation sector. Because of its limited energy resources, Turkey is greatly dependent on imported oil and gas, which is the most important diesel in Turkey, contributing 55% of Total Primary Energy Supply and importing 90% of its energy needs in 2004 (WEC-TNC, 2006). Passenger transport of Turkey increased by 2.5 times and goods transport increased by four times in the last two decades. The population increased by about 50% in the last two decades as well. Transportation demand increased more than gross domestic product (GDP) in Turkey when national economic parameters are compared to the transportation sector. Modeling energy consumption in the transport sector is usually dependent on many factors such as vehicular usage, type of car, income, housing size, vehicular type and many other socio-economic parameters. Including all the parameters in sectoral energy modeling is a difficult task since it requires much detailed study and also much data, for which many of the data are unavailable. Therefore, it would be better to model transport energy consumption with simplified forms of mathematical expressions using available data. In addition, it would be better to provide a framework for integrating knowledge of transportation sector energy use trends with analysis of sectoral energy growth in a developing country. Much is known about energy modeling, but this is not so in transportation systems since it requires vehicular-related parameters. The transportation energy modelwould be capable of exploring alternative transportation systems in the developing worlds as a main priority for sustainable future. Any approach and method used to estimate the effects of policies and measures have to embody some assumptions regarding the way measures will affect sectoral trends on energy consumption and efficiency of the sector with technological development. Mathematical models are usually based on the assumption that methodology is chosen and formed according to the minimization of some objective values such as minimizing energy consumption values. Therefore, among the many meta-heuristic approaches, HArmony Search Transport Energy Demand Estimation (HASTEDE) models are proposed since it is considered as an effective and accurate mathematical approach in energy modeling studies. The HASTEDE models are in the form of linear, exponential and quadratic mathematical expressions that are solved with harmony notion. The HASTEDE models take population, GDP and vehicle ownerships as an input to estimate transport energy demand to forecast sectoral consumption until 2025 starting from 2006. This paper has been organized in the following way. In the next section, some relevant literature review is given. Section 3 deals with the pHarmony search algorithm and problem formulation. Section 4 is on solution methods for the proposed energy modeling models. Sensitivity analyses (SAs) on harmony parameters are given in Section 5. Forecasting the future energy consumption in the transport sector is given in Section 6. Conclusions are drawn in Section 7.

The importance of energy demand and transportation sector energy analysis is dealt with in this study. The factors that directly affect the energy consumption are analyzed. The HS algorithm is proposed and model applications are correspondingly given. The SA on HS algorithm parameters is carried out and best fit values of the HS parameters are obtained. The HASTEDE models are compared with the MENR projections. The following results may be drawn from this study. The HS algorithm approach has been applied into the various engineering fields. However, its application to transport energy demand modeling is quite new, proposed in this study. The HASTEDE model can be used as an alternative solution and the estimation technique to available estimation techniques. Three forms of the HASTEDE model may be used for estimating transport energy demand, but the linear form underestimates the energy demand and the quadratic form overestimates the demand although they usually provide minimum objective function values. Thus, exponential forms of the models would be better to choose for energy modeling. Other forms of the HASTEDE models will provide an alternative way of energy planning during the decision-making process and they also provide useful information for scientists. The solution of the HASTEDE models for each form showed a steady convergence toward an optimum. Although each of the SAs cases may be used for model solution, the values of case 1 are selected as a best-fit HASTEDE and then selected for future forecasting. The quadratic form of HASTEDE will overestimate transport sector energy consumption by about 26% and linear and exponential forms will underestimate by about 21% when they are compared with the MENR projections. This is usually unavoidable due to the modeling procedure and selected socio-economic parameters, but determination of the upper and lower values for sectoral consumption would provide a framework and flexibility for energy policy developers. Further studies will be on the SA of selected socio-economic and transportation-related indicators with respect to an S-shaped car ownership model. Fuel efficiency and vehicular mix also need to be studied in future for sustaining transport and its corresponding services. Future studies will also be on a further application of proposed models to make transportation sector energy consumption more efficient in terms of controlling transport demand growth and introducing new legislation for fuel type for vehicles to save energy consumption.