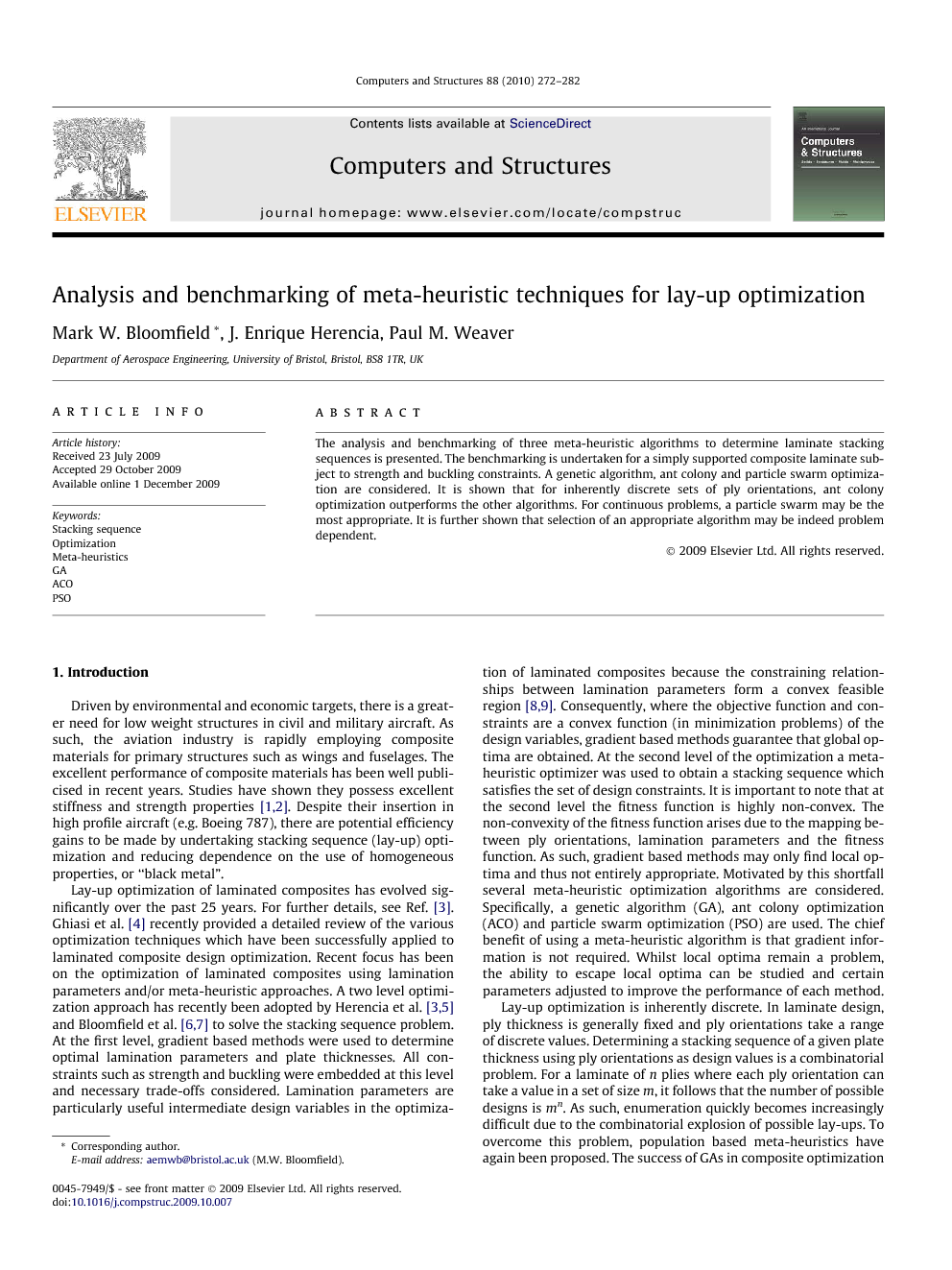 The analysis and benchmarking of three meta-heuristic algorithms to determine laminate stacking sequences is presented. The benchmarking is undertaken for a simply supported composite laminate subject to strength and buckling constraints. A genetic algorithm, ant colony and particle swarm optimization are considered. It is shown that for inherently discrete sets of ply orientations, ant colony optimization outperforms the other algorithms. For continuous problems, a particle swarm may be the most appropriate. It is further shown that selection of an appropriate algorithm may be indeed problem dependent.

The analysis of three meta-heuristic optimization techniques to determine composite lay-ups has been presented. Each of the three techniques were discussed and compared. The analysis suggested that the ACO paradigm would be the most appropriate method to determine laminate stacking sequences. Benchmarking was undertaken for a mass minimization problem subject to strength and buckling constraints. Later, a reliability analysis was performed. The results showed that the ACO is indeed the most appropriate method. The results indicated that the ACO was generally the most robust and reliable method given varying thickness (number of plies) and possible ply orientations. However, the ACO was not always the most efficient of methods – this was apparent when the size of the possible sets of ply orientations was near continuous. Nonetheless, the ACO was able to determine solutions in an acceptable number of iterations. When the number of possible ply orientations increased, it was demonstrated that the PSO outperformed the ACO. This effect is to be expected because the effectiveness of the ACO was diminished in running a near continuous optimization. However, if the set of possible ply orientations is close to or is indeed continuous, the ACO can be modified. This was recently shown by Socha and Dorigo [25] and is the subject of future work. For inherently discrete problems, the GA performed well with a high reliability factor but convergence was notably slow. On average, the GA was also the slowest of all three algorithms. In summary, it can be seen that the three different methods considered may be most suited to different types of problems. Future work may also consider the trade-off between reliability, efficiency and population size in each of the optimization methods.