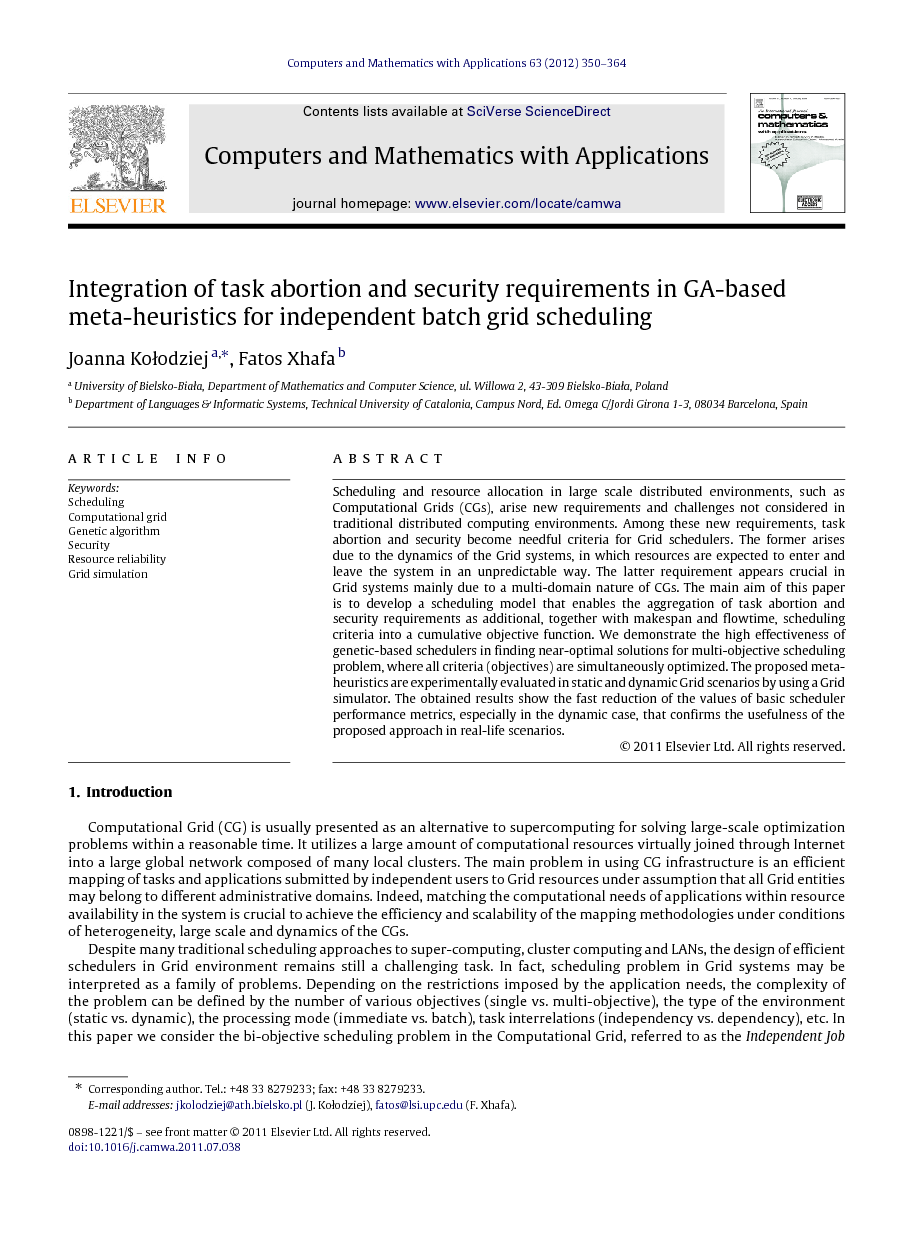 Scheduling and resource allocation in large scale distributed environments, such as Computational Grids (CGs), arise new requirements and challenges not considered in traditional distributed computing environments. Among these new requirements, task abortion and security become needful criteria for Grid schedulers. The former arises due to the dynamics of the Grid systems, in which resources are expected to enter and leave the system in an unpredictable way. The latter requirement appears crucial in Grid systems mainly due to a multi-domain nature of CGs. The main aim of this paper is to develop a scheduling model that enables the aggregation of task abortion and security requirements as additional, together with makespan and flowtime, scheduling criteria into a cumulative objective function. We demonstrate the high effectiveness of genetic-based schedulers in finding near-optimal solutions for multi-objective scheduling problem, where all criteria (objectives) are simultaneously optimized. The proposed meta-heuristics are experimentally evaluated in static and dynamic Grid scenarios by using a Grid simulator. The obtained results show the fast reduction of the values of basic scheduler performance metrics, especially in the dynamic case, that confirms the usefulness of the proposed approach in real-life scenarios.

In this work we have presented an optimization model for the Independent Batch Job Scheduling in Computational Grids with security and resource reliability requirements. The scheduling problem is defined as a bi-objective global minimization task with makespan and flowtime as the scheduler’s performance measures. Then, we have proposed and evaluated several variants of GAs for near optimally solving the bi-optimization model. We have empirically analyzed the performance of the GA-based schedulers in the Grid environment using a Grid simulator, whereby two scenarios are considered, namely, secure scenario (in which the security and resource reliability requirements are respected) and risky scenario (in which such requirements are ignored). The experimental results showed that in the risky mode Struggle Genetic Algorithm with the Euclidean metrics and CX operator is the best for medium and large size Grid environments, while the classical GA-based scheduler with CX operator and Steady State replacement mechanism performed best for small and very large Grids. On the other hand, in the secure scheduling mode the Struggle Genetic Algorithm with the Euclidean metrics and CX operator achieved the best makespan values in all Grid instances. Finally, regarding the flowtime optimization, the struggle replacement mechanism seems to be very effective, actually, the three variants of Struggle GAs performed best for the medium, large and very large Grid size scenarios. In our future work we would like to address the resolution of the bi-objective optimization model through the Pareto optimization approach. Besides solving the more general version of the problem, the Pareto approach would provide with not just a solution but a set of possible solutions, namely the Pareto front, which would useful for decision taking during the allocation of tasks to resources.