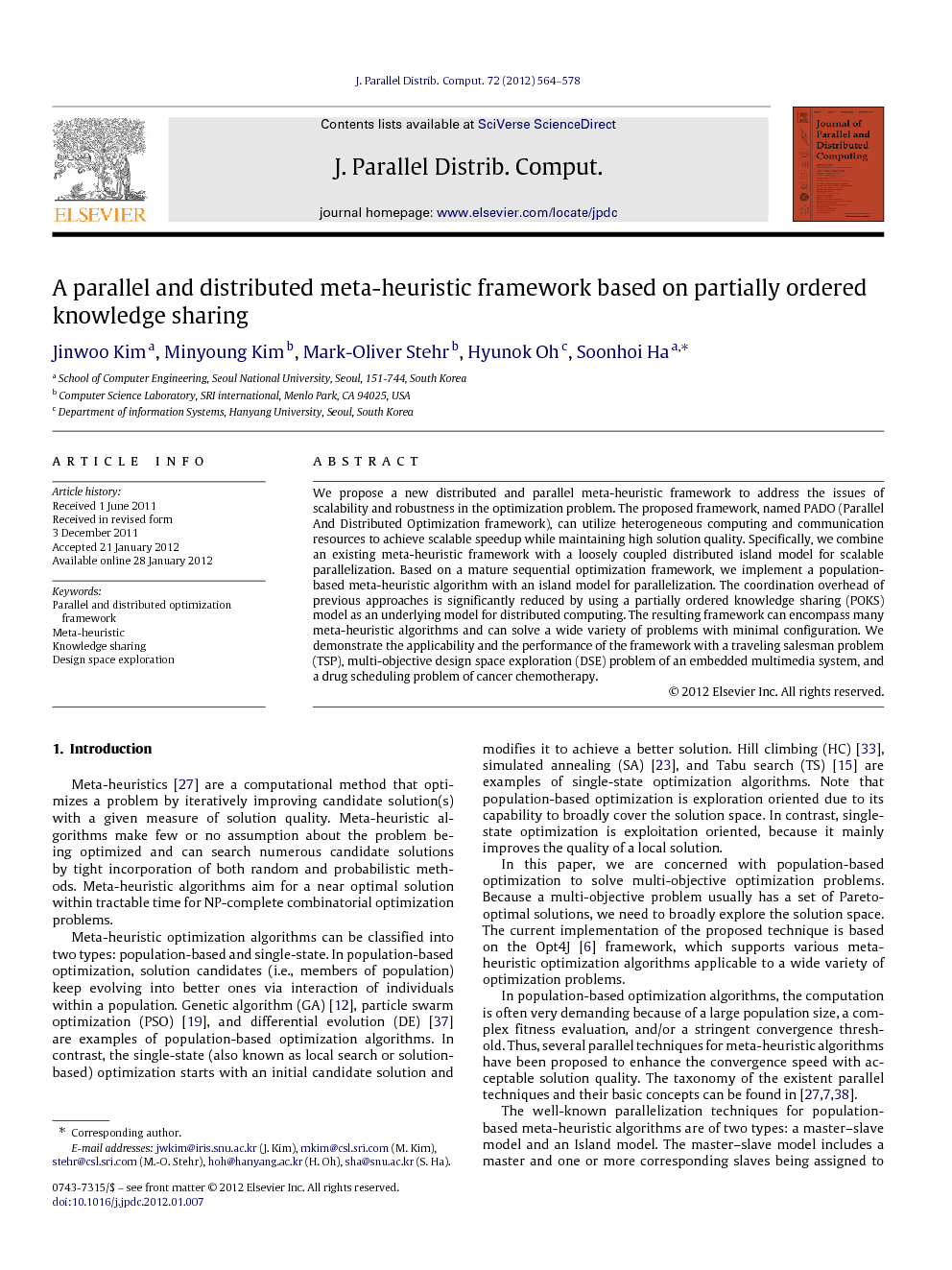 We propose a new distributed and parallel meta-heuristic framework to address the issues of scalability and robustness in the optimization problem. The proposed framework, named PADO (Parallel And Distributed Optimization framework), can utilize heterogeneous computing and communication resources to achieve scalable speedup while maintaining high solution quality. Specifically, we combine an existing meta-heuristic framework with a loosely coupled distributed island model for scalable parallelization. Based on a mature sequential optimization framework, we implement a population-based meta-heuristic algorithm with an island model for parallelization. The coordination overhead of previous approaches is significantly reduced by using a partially ordered knowledge sharing (POKS) model as an underlying model for distributed computing. The resulting framework can encompass many meta-heuristic algorithms and can solve a wide variety of problems with minimal configuration. We demonstrate the applicability and the performance of the framework with a traveling salesman problem (TSP), multi-objective design space exploration (DSE) problem of an embedded multimedia system, and a drug scheduling problem of cancer chemotherapy.

We propose PADO, a novel framework for parallel and distributed meta-heuristic optimization based on partially ordered knowledge sharing to solve the optimization problems that are frequently encountered in various domains of application. The underlying POKS model provides a way to share the global view of evolution progress through asynchronous communication of shared knowledge. The partial ordering of knowledge significantly reduces the overhead of communication and storage. In the frontend of PADO, users specify problems and algorithms by using the interfaces provided by Opt4J with their configuration parameters. In the backend, the cyber-framework disseminates optimal solutions from the local populations based on the POKS model. The key features of the PADO framework that differentiates it from the related work reviewed in Section 6 can be summarized as follow: (1) MOEA support. Real-world applications such as the DSE problem used in our case study often involve a multitude of constraints and optimization objectives. In PADO, MOEA optimization is supported by the combination of both Opt4J’s MOEA modules and the partial order semantics of the POKS model. In particular, individuals are equipped with a partial ordering that defines the relationship between the dominant and the dominated solutions. Only the dominant solution set of the current approximation of the Pareto front is kept in the local knowledge base and disseminated to other Islands. Pareto fronts propagate like waves through the network and can cancel each other based on the ordering, whenever they interfere. (2) Performance. PADO aims at speeding up parallel evolutionary methods without sacrificing the solution quality. By adopting the shared knowledge model, we can significantly reduce the number of redundant migrations in an Island-based parallelization. This is confirmed by our experimental results in Section 5. (3) Scalability to heterogeneous architectures. The PADO framework takes advantage of a heterogeneous network because it uses the cyber-framework’s capability to perform parallel and distributed processing on various combinations of computing architectures and network infrastructure, ranging from multi-core, multi-threaded architectures to distributed computing resources on the cloud. The heterogeneity in terms of hardware performance also can be considered to keep balance of evolution speed of each Island as we indicate future research. (4) Composition of heterogeneous optimizers. The Island model enables each node to run with different configurations, possibly pursuing different objectives. In the cyber-framework, a cyber-node can run different cyber-applications. For example, one cyber-node executes a SA to maximize the throughput, while the other cyber-node executes a GA to minimize the buffer size. As long as their genotypes are compatible, individuals can be exchanged among Islands. So if we are using different meta-heuristics in different cyber-nodes, then we may combine the advantages of local search, population-based, and other types of algorithms. We have not yet explored this possibility. This is another topic for future research. (5) Robustness. An evolutionary process should be robust against failures of computation/communication. In PADO, the loosely coupled Island model mitigates the impact of a single (master) node failure. Further, the underlying knowledge dissemination performed by the cyber-framework does not demand a central coordinator for managing the network topology nor a global state of evolution, which makes the PADO approach opportunistically robust against node and link failures. All Islands are self-organizing, and the shared knowledge is the only interface between Islands. In this model, an Island does not have to be concerned about the failure of others. In the current implementation, the population size of each Island and the crossover/mutation ratio are set manually and remain constant. Runtime, adaptive population balancing is worth pursuing in the future. For example, knowledge containing the progress of an ongoing evolution on each node can serve as a monitor about the status of other Islands, which can be further used to balance the workload among Islands. This feature is of great importance given the current trends of distributed computing environment, such as shared Internet-based clusters employed by many users (e.g., cloud computing). Interestingly, this is by itself a runtime optimization problem that could lead to a reflective version of PADO.