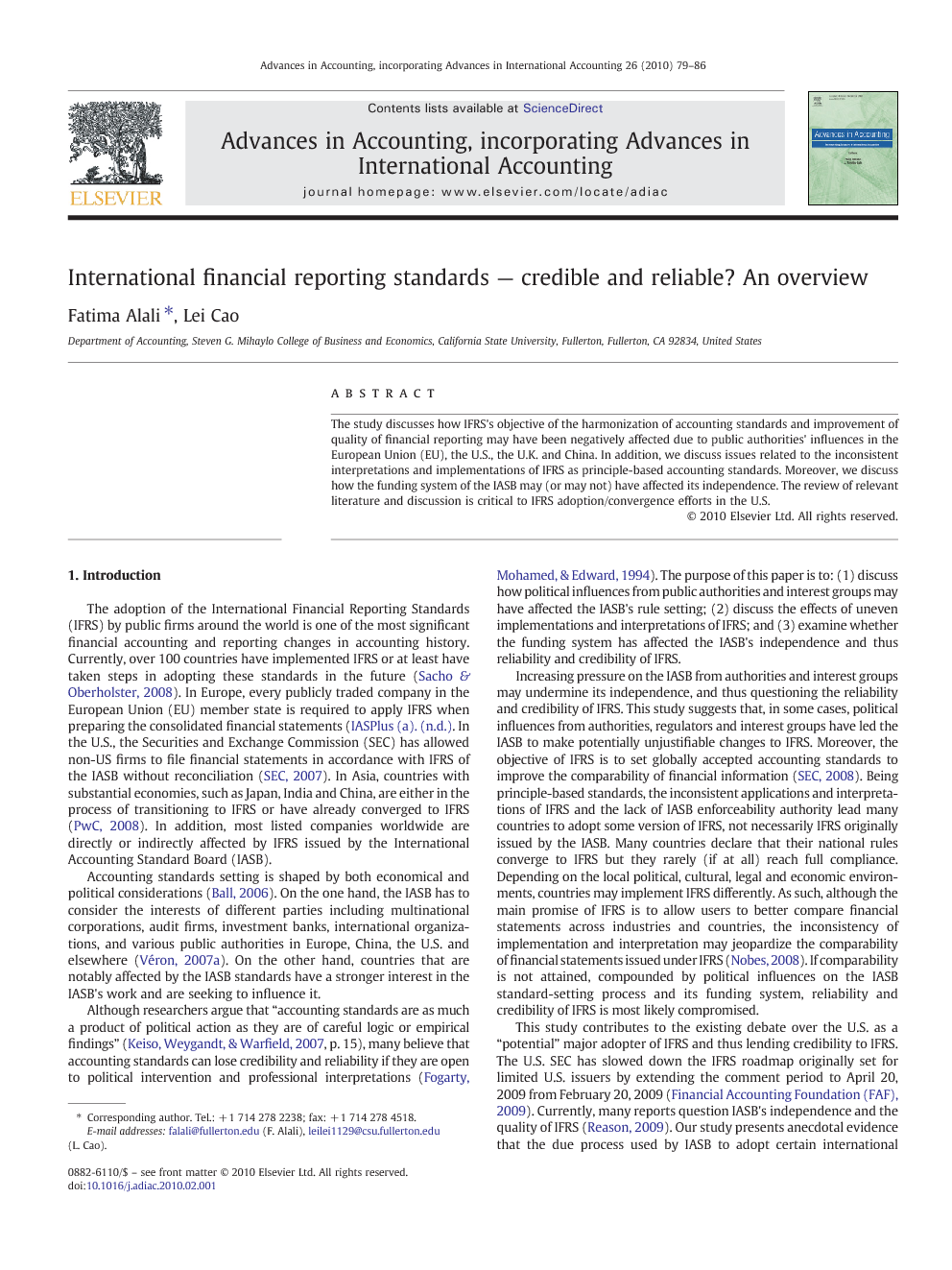 The study discusses how IFRS's objective of the harmonization of accounting standards and improvement of quality of financial reporting may have been negatively affected due to public authorities' influences in the European Union (EU), the U.S., the U.K. and China. In addition, we discuss issues related to the inconsistent interpretations and implementations of IFRS as principle-based accounting standards. Moreover, we discuss how the funding system of the IASB may (or may not) have affected its independence. The review of relevant literature and discussion is critical to IFRS adoption/convergence efforts in the U.S.

From the review of the development of the IASB and its due process, it is evident that IASB is vulnerable to political influence in one form or another. Nobes (2008) notes that influential political participates lobby through politics to oppose any accounting requirements that may hurt their earnings and/or financial position. Such lobbied changes, if rejected by the IASB, may result in national versions of IFRS, such as EU-version of IAS 39. Otherwise, if the lobbied changes are accepted by the IASB, IFRS quality is diminished and surely it raises concerns about IASB independence. Adoption and amendments due process of IAS 39, IAS 24, IAS 19 and IFRS 8 are discussed in the study. In addition, IFRS are adopted with the goal of making financial statements comparable across the board, improve the usefulness of financial statements, and help the expansion of the global economy. As a global set of uniform accounting standards, however, it may not be appropriate to all countries. Countries have different cultures, financial and legislative/legal systems and tend to apply and interpret IFRS based on their national interests and biases. This is especially true for IFRS, a set of principle-based standards. Moreover, the lack of enforceability authority of the IASB and openness of IFRS to multiple interpretations further potentially reduce the international standards reliability and credibility. Moreover, the IASB's new funding system provides opportunities to large-fund-contributing countries to have a stronger present influence on the standard-setting process than other countries. Although the IASB's independence may have been negatively affected by the incidences discussed in this study, one thing for sure is that as more and more countries are adopt IFRS, the IASB will have to face more pressure from these countries and became more open to changes. By no means may this openness lead to lower quality reporting standards; a goal of transparency must be kept in mind when issuing new standards or amending existing ones. A system of regulatory oversight can be needed to maintain IASB's independence. Moreover, IFRS can be regarded as a high-quality standard only when the marketplace believes so. Empirical and analytical studies on the value-relevant of accounting information reported under IFRS must continue. Investors are the main users of financial statements, and thus far quite a few studies indeed document evidence of value-relevant of financial information issued under IFRS. Opponents of IFRS in U.S. argue that financial statements prepared under the U.S. GAAP have earned investor's confidence, and that U.S. GAAP have led to more transparent reporting and thus to lower cost of capital. The U.S. GAAP is older and has been used in the past. The opposing view is that by not converging/adopting IFRS, U.S. firms are at a competitive disadvantage especially those firms that trade on foreign markets. Regulators, market participants, auditors and other parties must weigh the costs and benefits of IFRS adoption or convergence in the U.S. against the ultimate goal of transparent-comparable financial information, i.e. value-relevant information. As principle-based standards, IFRS allow much more discretion in financial accounting and reporting choices which is yet potentially another cost.14 However, whichever route the U.S. decides to take, quality of financial reporting is based not only on the accounting standards but also the company's own business model, structure, including the cultural, economic, legal and political systems in which it operates.