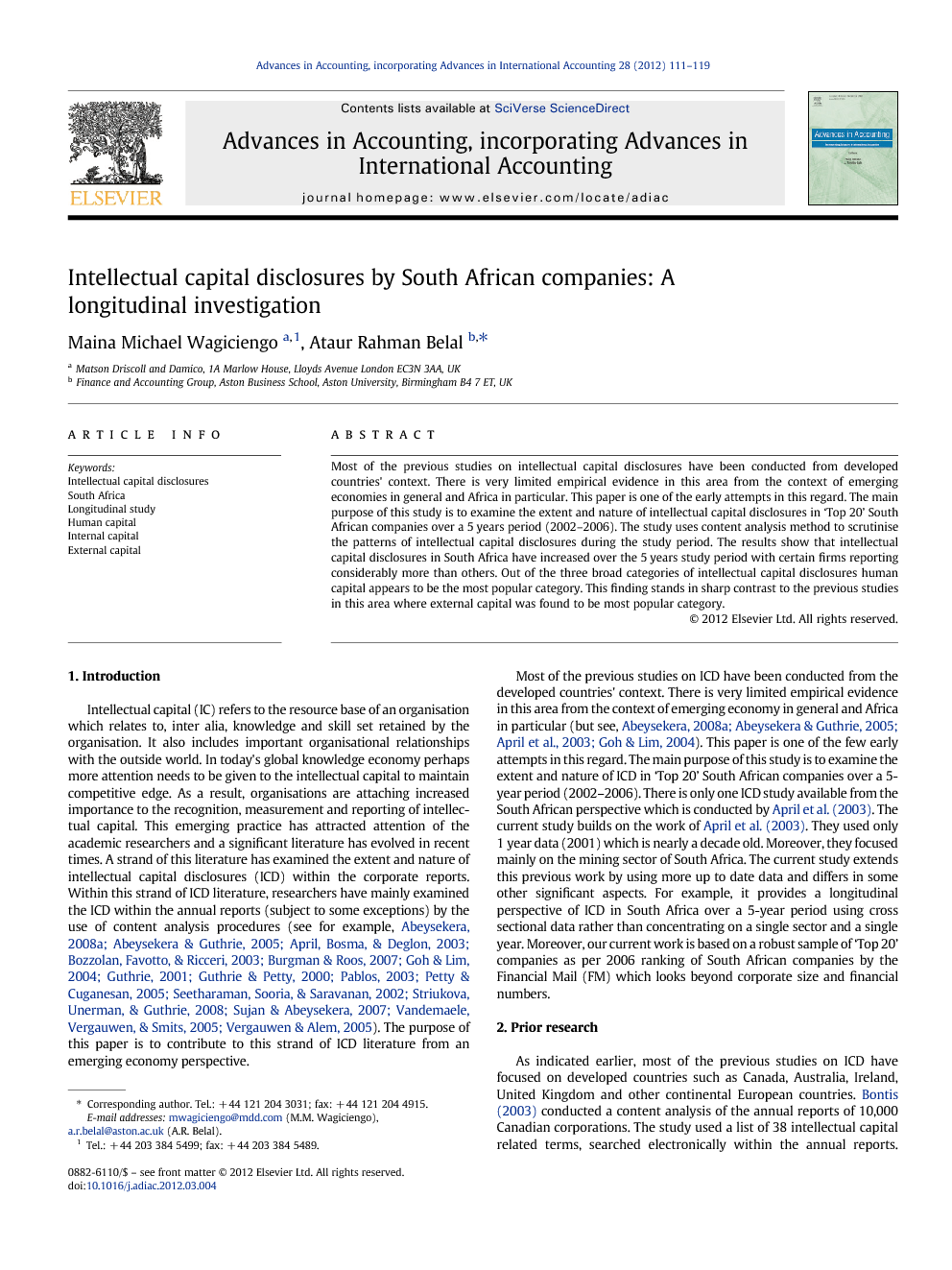 Intellectual capital (IC) refers to the resource base of an organisation which relates to, inter alia, knowledge and skill set retained by the organisation. It also includes important organisational relationships with the outside world. In today's global knowledge economy perhaps more attention needs to be given to the intellectual capital to maintain competitive edge. As a result, organisations are attaching increased importance to the recognition, measurement and reporting of intellectual capital. This emerging practice has attracted attention of the academic researchers and a significant literature has evolved in recent times. A strand of this literature has examined the extent and nature of intellectual capital disclosures (ICD) within the corporate reports. Within this strand of ICD literature, researchers have mainly examined the ICD within the annual reports (subject to some exceptions) by the use of content analysis procedures (see for example, Abeysekera, 2008a, Abeysekera and Guthrie, 2005, April et al., 2003, Bozzolan et al., 2003, Burgman and Roos, 2007, Goh and Lim, 2004, Guthrie, 2001, Guthrie and Petty, 2000, Pablos, 2003, Petty and Cuganesan, 2005, Seetharaman et al., 2002, Striukova et al., 2008, Sujan and Abeysekera, 2007, Vandemaele et al., 2005 and Vergauwen and Alem, 2005). The purpose of this paper is to contribute to this strand of ICD literature from an emerging economy perspective. Most of the previous studies on ICD have been conducted from the developed countries' context. There is very limited empirical evidence in this area from the context of emerging economy in general and Africa in particular (but see, Abeysekera, 2008a, Abeysekera and Guthrie, 2005, April et al., 2003 and Goh and Lim, 2004). This paper is one of the few early attempts in this regard. The main purpose of this study is to examine the extent and nature of ICD in ‘Top 20’ South African companies over a 5-year period (2002–2006). There is only one ICD study available from the South African perspective which is conducted by April et al. (2003). The current study builds on the work of April et al. (2003). They used only 1 year data (2001) which is nearly a decade old. Moreover, they focused mainly on the mining sector of South Africa. The current study extends this previous work by using more up to date data and differs in some other significant aspects. For example, it provides a longitudinal perspective of ICD in South Africa over a 5-year period using cross sectional data rather than concentrating on a single sector and a single year. Moreover, our current work is based on a robust sample of ‘Top 20’ companies as per 2006 ranking of South African companies by the Financial Mail (FM) which looks beyond corporate size and financial numbers.

The above results show that total overall ICD has increased over the study period and across the three categories. However, increase is particularly noticeable in the human capital category where it has doubled both in terms of frequency and line counts during the study period. This is also observed in the comparison of this study's findings with those of prior studies conducted from the emerging economy context. The comparison is shown in Table 7. Table 7 shows that, like most of the previous studies, this study also found internal capital as the least popular category. However, this study differs from the previous studies in that it reports human capital as the most popular category as opposed to external capital which was found by most of the previous ICD studies (including April et al.'s (2003) previous South African studies). The proportion of human capital disclosures has increased from 30% in the previous South African study (April et al., 2003) to 69% in the current study. This is a remarkable change in the pattern of ICD in general and South Africa in particular which needs to be explained further. It must be noted here that most of the human capital sub-categories and items are related to various employee related issues. Amongst the 15 sub-categories ‘equity issues’ attracted the top rank. This might be attributed to the strong political and social emphasis placed on ‘equity issues’ in South Africa. The South African government has taken several steps to ensure these issues are taken into consideration by the companies. Introduction of King Report 2 (2002) and BEE Act in 2004 is part of that initiative. These contextual factors have been discussed in section three to help us interpret the findings of this study. According to the legitimacy theory it can be argued that increased disclosures in the human capital category could be part of a corporate strategy to align with the societal expectations by demonstrating that they are adequately addressing these issues. It is observed that that there are variations in ICD practices of different companies in different sectors which echoes the findings of Bozzolan et al. (2003) and Striukova et al. (2008). The previous South African study by April et al. (2003) indicated that mining companies had a lower propensity to ICD relative to other companies. This is confirmed by our study as well. The only two mining companies (Petmin and Schamin) included in our study did not perform very well in terms of their ICD and features at the bottom of the rankings shown in Table 6. Similar to Bozzolan et al. (2003) and Striukova et al. (2008) we also observe variations between companies due to size effects. Bozzolan et al. (2003) argued that larger companies undertake more activities with different business units, different critical success factors and different long term value-creating potential. They tend to disclose more information to provide stakeholders with a complete picture of the company. In this study this argument can be backed up using the MTN Group as an example. MTN is not only the largest company in our top 20 companies it is also ranked first for its ICD. On the other hand, the smallest company, Don, received the lowest ranking. In this study, we have also captured the location of ICD. We have found that most of the ICD is located in the corporate governance and directors' report section of the annual report which indicates the level of importance attached to these disclosures by the South African companies. It could be due to these firms coming under a lot of pressures not only from stakeholders such as government and employees but also due to the increasing competition in the regional and global market place where more attention is paid to the non-financial factors that affect business. Very little has been disclosed in the financial statements section which implies that there are rare attempts to quantify ICD in financial terms. This could be due to difficulties involved in putting precise figures into the various ICD items. The knowledge in this area is still very limited and evolving in nature. Out study contributes to the ICD literature on two counts: it provides an insight from the under researched African perspective and it provides a rare longitudinal perspective of ICD practice as opposed to previous studies which mainly concentrated on a single year. However, like all other research the method adopted in this research has some limitations. For example, there are subjectivities involved in the coding procedures used. To minimise this we have used various measures explained in the methodology section. Moreover, it is not possible to interact with the data generated within the annual reports due to its fixed nature. To overcome this future research might use interview method combined with content analysis to understand the corporate motivations behind ICD. Given the dearth of longitudinal research in ICD future research might also involve a longer time period with more companies.