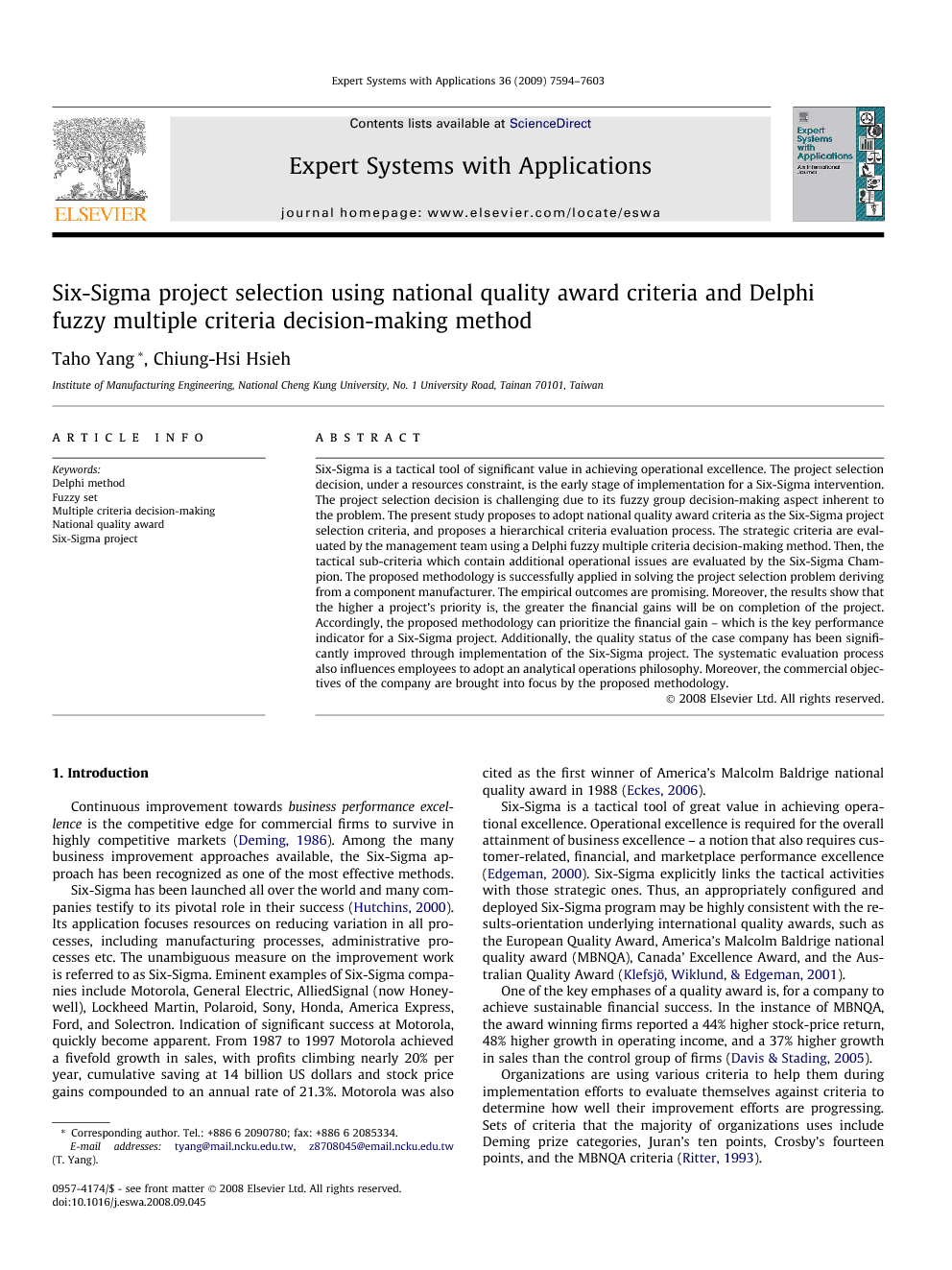 Six-Sigma is a tactical tool of significant value in achieving operational excellence. The project selection decision, under a resources constraint, is the early stage of implementation for a Six-Sigma intervention. The project selection decision is challenging due to its fuzzy group decision-making aspect inherent to the problem. The present study proposes to adopt national quality award criteria as the Six-Sigma project selection criteria, and proposes a hierarchical criteria evaluation process. The strategic criteria are evaluated by the management team using a Delphi fuzzy multiple criteria decision-making method. Then, the tactical sub-criteria which contain additional operational issues are evaluated by the Six-Sigma Champion. The proposed methodology is successfully applied in solving the project selection problem deriving from a component manufacturer. The empirical outcomes are promising. Moreover, the results show that the higher a project’s priority is, the greater the financial gains will be on completion of the project. Accordingly, the proposed methodology can prioritize the financial gain – which is the key performance indicator for a Six-Sigma project. Additionally, the quality status of the case company has been significantly improved through implementation of the Six-Sigma project. The systematic evaluation process also influences employees to adopt an analytical operations philosophy. Moreover, the commercial objectives of the company are brought into focus by the proposed methodology.

Continuous improvement towards business performance excellence is the competitive edge for commercial firms to survive in highly competitive markets (Deming, 1986). Among the many business improvement approaches available, the Six-Sigma approach has been recognized as one of the most effective methods. Six-Sigma has been launched all over the world and many companies testify to its pivotal role in their success (Hutchins, 2000). Its application focuses resources on reducing variation in all processes, including manufacturing processes, administrative processes etc. The unambiguous measure on the improvement work is referred to as Six-Sigma. Eminent examples of Six-Sigma companies include Motorola, General Electric, AlliedSignal (now Honeywell), Lockheed Martin, Polaroid, Sony, Honda, America Express, Ford, and Solectron. Indication of significant success at Motorola, quickly become apparent. From 1987 to 1997 Motorola achieved a fivefold growth in sales, with profits climbing nearly 20% per year, cumulative saving at 14 billion US dollars and stock price gains compounded to an annual rate of 21.3%. Motorola was also cited as the first winner of America’s Malcolm Baldrige national quality award in 1988 (Eckes, 2006). Six-Sigma is a tactical tool of great value in achieving operational excellence. Operational excellence is required for the overall attainment of business excellence – a notion that also requires customer-related, financial, and marketplace performance excellence (Edgeman, 2000). Six-Sigma explicitly links the tactical activities with those strategic ones. Thus, an appropriately configured and deployed Six-Sigma program may be highly consistent with the results-orientation underlying international quality awards, such as the European Quality Award, America’s Malcolm Baldrige national quality award (MBNQA), Canada’ Excellence Award, and the Australian Quality Award (Klefsjö, Wiklund, & Edgeman, 2001). One of the key emphases of a quality award is, for a company to achieve sustainable financial success. In the instance of MBNQA, the award winning firms reported a 44% higher stock-price return, 48% higher growth in operating income, and a 37% higher growth in sales than the control group of firms (Davis & Stading, 2005). Organizations are using various criteria to help them during implementation efforts to evaluate themselves against criteria to determine how well their improvement efforts are progressing. Sets of criteria that the majority of organizations uses include Deming prize categories, Juran’s ten points, Crosby’s fourteen points, and the MBNQA criteria (Ritter, 1993). A comparison between the national quality award and the Six-Sigma program conducted by Przekop (2006) shows that the core emphases of both are similar. For example, similarities are evident in the procedure-focusing, customer-focusing, cooperation, data driven management, and the strategic planning. Therefore, the quality award criteria are also logically exacting for the project selection criteria of a successful Six-Sigma program. The project selection is a priori for the implementation of a Six-Sigma program. In fact, the project selection for Six-Sigma program is often the most important and difficult part (Pande, Robert, & Roland, 2002). The Six-Sigma project selection problem falls within fuzzy multiple criteria decision-making (FMCDM). The present study proposes to adopt the national quality award as the selection framework and proposes a FMCDM method for the criteria evaluation and project selection. The FMCDM methods have been developed due to the imprecision in assessing the relative importance of criteria and the performance ratings of alternative techniques. Imprecision may arise from a variety of reasons: unquantifiable information, incomplete information, unobtainable information, and partial ignorance. To resolve this difficulty, fuzzy set theory has been adopted for the decision-making process (Bellman & Zadeh, 1970). For the FMCDM problem, the decision-makers use linguistic variables to evaluate the importance of criteria and the ratings of alternatives (or projects) with respect to various criteria. The present study will adopt a case from Taiwan for empirical examples. Accordingly, Taiwan National Quality Award (TNQA) criteria will be adopted as the Six-Sigma project selection criteria (as shown in Appendix A1). The TNQA has a hierarchical structure. It has eight strategic criteria. Each strategic criterion has its associated sub-criteria. In total, there are 33 sub-criteria.

The proposed methodology was successfully applied in solving the project selection problem derived from a backlight module manufacturer. Under normal resource constraints in most empirical instances, selection of a project is always an important decision. There is a need to rank the implementation priority among the candidate projects. The present study, innovatively adopted national quality award criteria as the Six-Sigma project selection criteria. In addition, the hierarchical decision process for the strategic criteria and the tactical sub-criteria by the top management team and by the Champion, respectively, can integrate both the strategic and tactical objectives. Furthermore, results indicate that the Delphi FMADM is both flexible and robust for the group decision-making process. Empirical examples show promise for the proposed methodology. The present study showed that the higher a project’s priority is, the greater the financial gain from completion of the project. Accordingly, the proposed methodology can prioritize the financial gain – which is the key performance indicator for a Six-Sigma project. In addition to the tactical benefits of the financial gains, the selection process will also meet strategic benefits due to its deliberate criteria mapping with TNQA. Furthermore, the systematic evaluation process will influence people with quality management philosophy and reinforce the commercial objectives of the company.