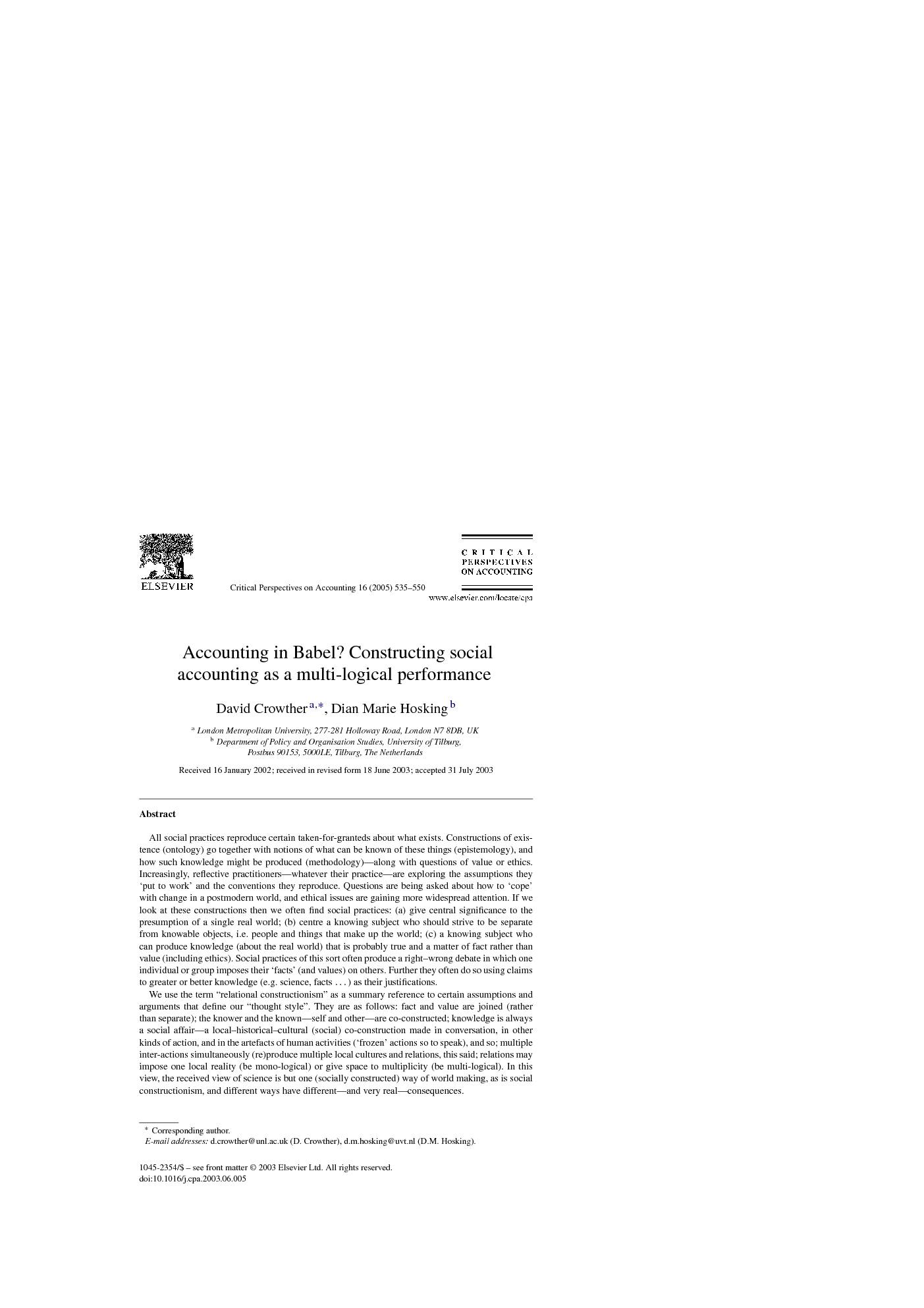 All social practices reproduce certain taken-for-granteds about what exists. Constructions of existence (ontology) go together with notions of what can be known of these things (epistemology), and how such knowledge might be produced (methodology)—along with questions of value or ethics. Increasingly, reflective practitioners—whatever their practice—are exploring the assumptions they ‘put to work’ and the conventions they reproduce. Questions are being asked about how to ‘cope’ with change in a postmodern world, and ethical issues are gaining more widespread attention. If we look at these constructions then we often find social practices: (a) give central significance to the presumption of a single real world; (b) centre a knowing subject who should strive to be separate from knowable objects, i.e. people and things that make up the world; (c) a knowing subject who can produce knowledge (about the real world) that is probably true and a matter of fact rather than value (including ethics). Social practices of this sort often produce a right–wrong debate in which one individual or group imposes their ‘facts’ (and values) on others. Further they often do so using claims to greater or better knowledge (e.g. science, facts . . . ) as their justifications. We use the term “relational constructionism” as a summary reference to certain assumptions and arguments that define our “thought style”. They are as follows: fact and value are joined (rather than separate); the knower and the known—self and other—are co-constructed; knowledge is always a social affair—a local–historical–cultural (social) co-construction made in conversation, in other kinds of action, and in the artefacts of human activities (‘frozen’ actions so to speak), and so; multiple inter-actions simultaneously (re)produce multiple local cultures and relations, this said; relations may impose one local reality (be mono-logical) or give space to multiplicity (be multi-logical). In this view, the received view of science is but one (socially constructed) way of world making, as is social constructionism, and different ways have different—and very real—consequences. In this paper, we take our relational constructionist style of thinking to examine differing constructions of foot and mouth disease (FMD)1 in the UK. We do so in order to highlight the dominant relationship construction.We argue that this could be metaphorised as ‘accounting in Babel’—as multiple competing monologues—many of which remained very local and subordinated by a dominant logic. However, from a relational constructionist point of view, it is also possible to argue that social accounting can be done in a more multi-logical way that gives space to dialogue and multiplicity. In the present (relational constructionist) view, accounting is no longer ‘just’ a question of knowledge and methodology but also a question of value and power. To render accounting practices more ethical they must be more multi-voiced and enable ‘power to’ rather than ‘power over’.

On 19 February 2001, foot and mouth disease (FMD)was officially declared to exist in the UK. This was the first confirmed official outbreak since 1968.Within 3 weeks, the number of outbreaks around the UK had increased to such an extent that the term “epidemic” was being used. Further, Professor Roy Anderson2 (self-styled expert in computer modelling the epidemiology of human diseases3) described it as an epidemic out of control.4 Despite this being refuted by a government minister,5 the claim was subsequently repeated on the national television programme Newsnight.6 Over the next 3 months, the disease was at the forefront of the government agenda and news reporting—and was pronounced so serious that local government elections were postponed from May until June,7 when the computer modelling predicted that the epidemic would be almost over. The FMD outbreak was considered so serious that the public were banned from entering parts of the countryside in the hope of preventing the spread of the disease. This ban affected large part of the countryside—as determined by local authorities—whether or not any outbreaks of FMD had been reported and, in some instances, whether or not any livestock were present. The effect of the ban upon local businesses, particularly on tourism—upon which a large proportion of the countryside economy is based8—was very severe. The effects had been so miscalculated in the initial accounting that by Easter hasty changes were being made to the official pronouncements and policies. By late April, the British Government was publicly announcing that the countryside—far from being closed to the public—was actually ‘open for business’. This was regardless of the fact that little more than hotels and teashops in tourist towns were actually accessible to the public. By early May the government experts were announcing that the epidemic was tapering off and would soon be over. This paved the way for the delayed elections and for the disappearance of the ‘serious epidemic’ from public reporting. Despite that fact that approximately one third of the confirmed outbreaks happened after this announcement, and despite the fact that much of the countryside remained off limits for a further 6 months, the public discussion ofFMDquickly dwindled and soon disappeared from general awareness. In actual fact outbreaks of the disease continued until late October and, in most of the country, the epidemic was not officially over until November. Indeed, some parts of the country were still declared at risk at the beginning of 2002. Thus, the FMD epidemic moved from public awareness to public oblivion; as was argued by Baudrillard (1995) in relation to the Gulfwar,9 its control and elimination bore little relation to public awareness, which depended upon the changing accountings in the media. It is interesting to note that the accounting ofFMDchanged over time as different voices— each with their own accounts—were raised. These different accountings are still widely different in terms of cost and impact upon the economy. For example, the Department of Food and Rural Affairs (DEFRA—and previously Ministry of Agriculture, Food and Fisheries (MAFF) before the June general election) reported (http://www.defra.gov.uk/) that the outbreak cost £2.2 billion of which 60% would be paid by the EC—although Private Eye (November 2001) state that actually only 17% of this will be paid by the EC. Equally DEFRA reported that 3.9 million animals were slaughtered—although Private Eye (2001) and Farmers Weekly (2001) estimate that 7.7 million, one eighth of all the farm animals in Britain were actually slaughtered. Other estimates of the cost of the outbreak include: • British Tourist Board—£5 billion (English Heritage). • English Tourism Council—£1.3 billion and 250,000 jobs. • Institute of Directors—£18 to £20 billion. Other accountings speak of the devastation of lives (e.g. http://www.warmwell.com); provide alternative scientific accounts of the control policies adopted (e.g. http://www. Cullmaff.com or http://www.sheepdrove.com/fam.htm), and give assessments of the impacts upon agro-ecosystems (Simmons, 2001), recreation (White, 2001) and rural communities (Winchester, 2001).