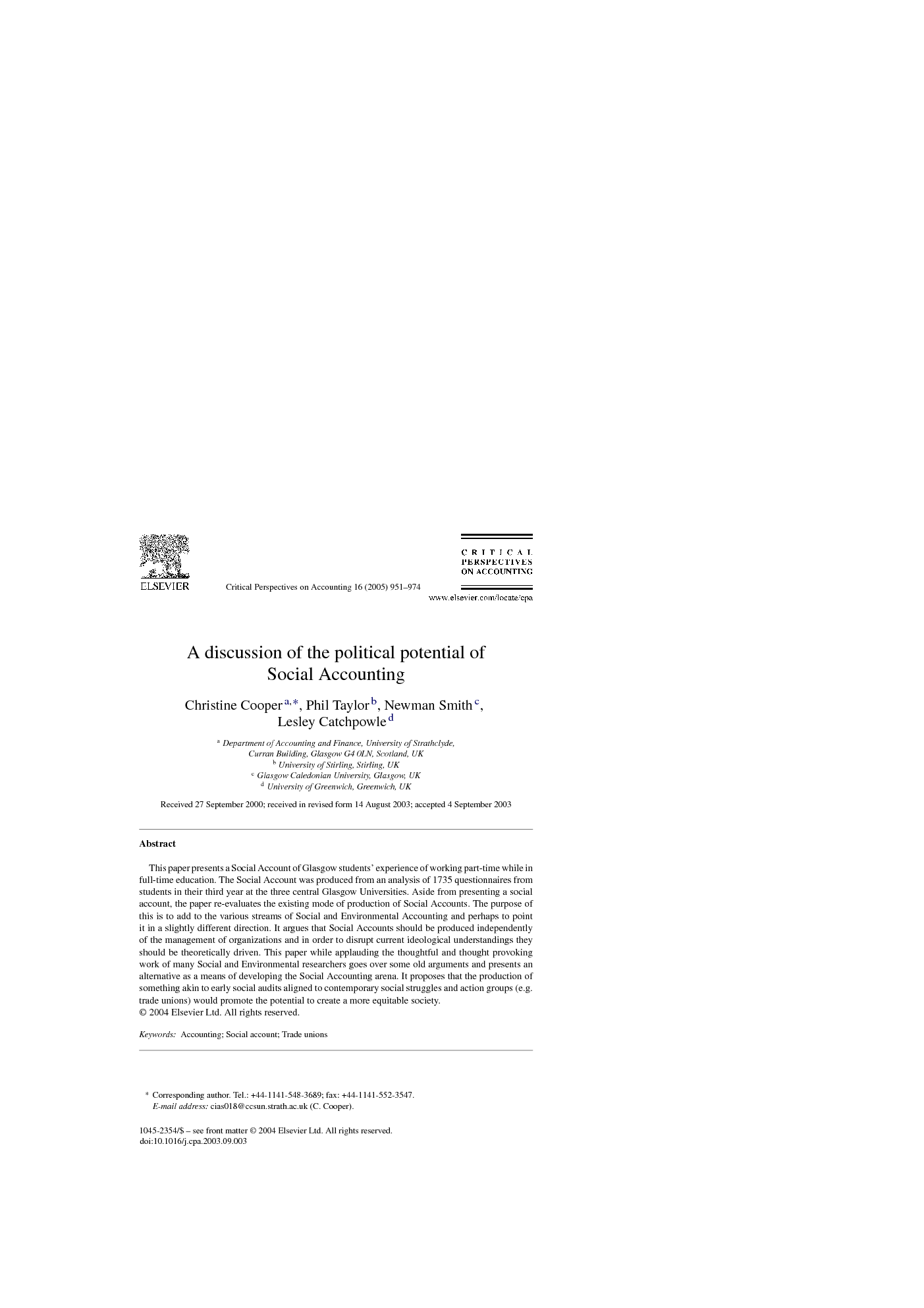 This paper presents a Social Account of Glasgow students’ experience of working part-time while in full-time education. The Social Account was produced from an analysis of 1735 questionnaires from students in their third year at the three central Glasgow Universities. Aside from presenting a social account, the paper re-evaluates the existing mode of production of Social Accounts. The purpose of this is to add to the various streams of Social and Environmental Accounting and perhaps to point it in a slightly different direction. It argues that Social Accounts should be produced independently of the management of organizations and in order to disrupt current ideological understandings they should be theoretically driven. This paper while applauding the thoughtful and thought provoking work of many Social and Environmental researchers goes over some old arguments and presents an alternative as a means of developing the Social Accounting arena. It proposes that the production of something akin to early social audits aligned to contemporary social struggles and action groups (e.g. trade unions) would promote the potential to create a more equitable society.

Social and Environmental Accounting (SEA) has commanded considerable attention in the academic accounting literature (see e.g. Adams, 2002; Bebbington, 1997; Bebbington et al., 1999; Buhr, 2002; Everett and Neu, 2000; Gray et al., 1988, 1995, 1997; Lehman, 1995, 1996, 1999; Lewis and Unerman, 1999; Mathews, 1997; Milne, 2002). This paper is intended to add to this literature both theoretically and empirically and through the unity of the two (praxis). The empirical contribution is through a Social Account of the financial hardship of undergraduate students in Glasgow, Scotland, which the authors developed. In order to produce a comprehensive Social Account questionnaires were sent to all third year undergraduate students at the three central Glasgow Universities (Glasgow, Glasgow Caledonian and Strathclyde).1 The findings of the Social Account are reported in the paper alongside the political and economic context in which it was launched. The Social Account originated during the period in which Scotland opened its own parliament and the New Labour government introduced tuition fees. These two factors heightened the debate surrounding the funding of higher education especially in Scotland. The theoretical framework used both in the production of the Social Account and the paper’s discussion of some of the issues surrounding Social Accounting is Marxist. One element of Marxism which might be seen as informing the Social Account is simply that of exposure, of laying bare the real conditions of the exploited and oppressed, of polemicising against capitalism. This might be seen as standing in the tradition of Marx himself as a journalist (Neue Rheinische Zeitung). The second element which informs the Social Account is the Marxist dialectical understanding that society is animated by the incommensurable interests between capital and labour. This means that capital needs to pay the lowest achievable wages and try to maintain the maximum output from its workforce while labour wishes to try to earn the maximum wages possible. Educational attainment is a traditional means through which labour has attempted to obtain the maximum income possible. Thus there is a high demand for higher educational qualifications. If students do not have a way to support themselves through the education process, they will of necessity seek part-time employment. In this setting bright, well-motivated, mostly un-unionised, hard-up students become targeted as cheap employees. The Social Account demonstrates that the low pay, long hours and poor conditions of student workers impacts negatively on their educational experience. The Marxist theoretical framework is also used to consider some extant literature in Social and Environmental Accounting. This literature has a kind of progressive edge to it in the sense that it sees the production of SEAs as having the potential to create a fairer more just society. While this is a worthy motive, the idea that individual company information (albeit in the form of a company SEA) can be used to make socially efficient decisions is questioned. SEAs produce very poor information from a total societal perspective. Moreover, there appears to be a tension in the neo-pluralistic ontology of much SEA research which neglects to acknowledge the power relations in society and consequently fails to challenge them. Although taking a rather different theoretical perspective, in some senses our work parallels that of Gallhofer and Haslam (2002) which believes that accounting should be evaluated in terms of its contribution to a notion of social well-being. Gallhofer and Haslam (2002) encourage those with a close interest in accounting to make the search for a more emancipatory and enabling accounting a core area of their interest. The paper is structured as follows. The next section sets the scene by giving a very brief account of early Social Audits which were used in the Marxist sense of exposing some of the worse excesses of capitalism. Social and Environmental Accounts produced from the same tradition are also considered in this section. The following section briefly considers SEAs from a broader societal perspective. Because of the inter-connectedness of our social world, decisions made by individual companies have unregulated social effects that cannot be encompassed by an individual company SEAs. The idea of “inter-connectedness” is developed in the following section on dialectics and the Marxist Characterisation of Capitalism. This section sets out the Marxist dialectical position that society is shaped by contradictory material forces. Lastly we present our Social Account and the part it played in the debate surrounding higher education funding in Scotland. The conclusion considers some of the factors which may enable Social and Environmental Accounts to participate fully in social struggles.

In this paper we have set out a case for understanding society as a totality that is animated by capitalism. But the understanding that society is a totality and that it is animated by a central contradiction is not enough to present an adequate account of capitalism. We are dealing with real social processes and so the dialectic has to be able to show how the central contradictions of capitalist society are expressed, often in very different forms, in all the economic, cultural, political, ideological, environmental and legal aspects of society (Rees, 1998). In our social account, the form of the contradictionwas expressed through education. For example, it could be argued that education has always been seen as a means of promoting social equality. For many working class children education has been undertaken as a means of social advancement. It is certainly the case that on average degree holders earn more than those without a degree. Thus unsurprisingly many children of all classes wish to enter into higher education. Marx’s theory can add important insights here. It reminds us that under capitalism we are all “free workers” whose means of support will be the sale of our Labour; hence the desire to try to get the best “price” possible by going to university. For individual capitalist organizations market competition means constant pressures to raise levels of labour exploitation as a condition for the survival of the capitalist enterprise. Recently this has taken the form of employers taking on low cost flexible labour. Many students were in practice faced with an income gap since (even if they wanted to) they could not borrow enough money to live on. This made students easy targets for exploitation.With the dominant market ideology so firmly in place it is difficult to question this. Market ideology tells us that the inevitable outcome of nature’s laws is that we have to work; the corollary to this is that state benefits are unnatural and against the best interests of society. But the effect of all this is that young people who are ostensibly “doing the right thing” are being left open to pretty ruthless exploitation. The dialectic here is that capitalism needs well-trained workers. Dialectical materialism informs us that it is impossible to predict the outcome of any situation since it will be determined as much by political responses as economic dynamics. In the case of higher education in Britain, this is undoubtedly the case. What lessons have we learned from our experience of producing a Social Account? What is the political potential of Social Accounting? Clearly this depends upon the actual Social Account. In general, however, wewould argue that even the most carefully researched social account would have little impact unless it were 1 produced outside of the mechanisms of the market 2 theoretically informed 3 linked to contemporary social struggles and groups As academics we have the research and communication skills to produce rich Social Accounts. Their emancipatory potential will depend upon the social alliances which they can engage with and their understanding of the social world. We hope that this paper encourages academic debate in this important arena and a new form of thinking about Social Accounts.