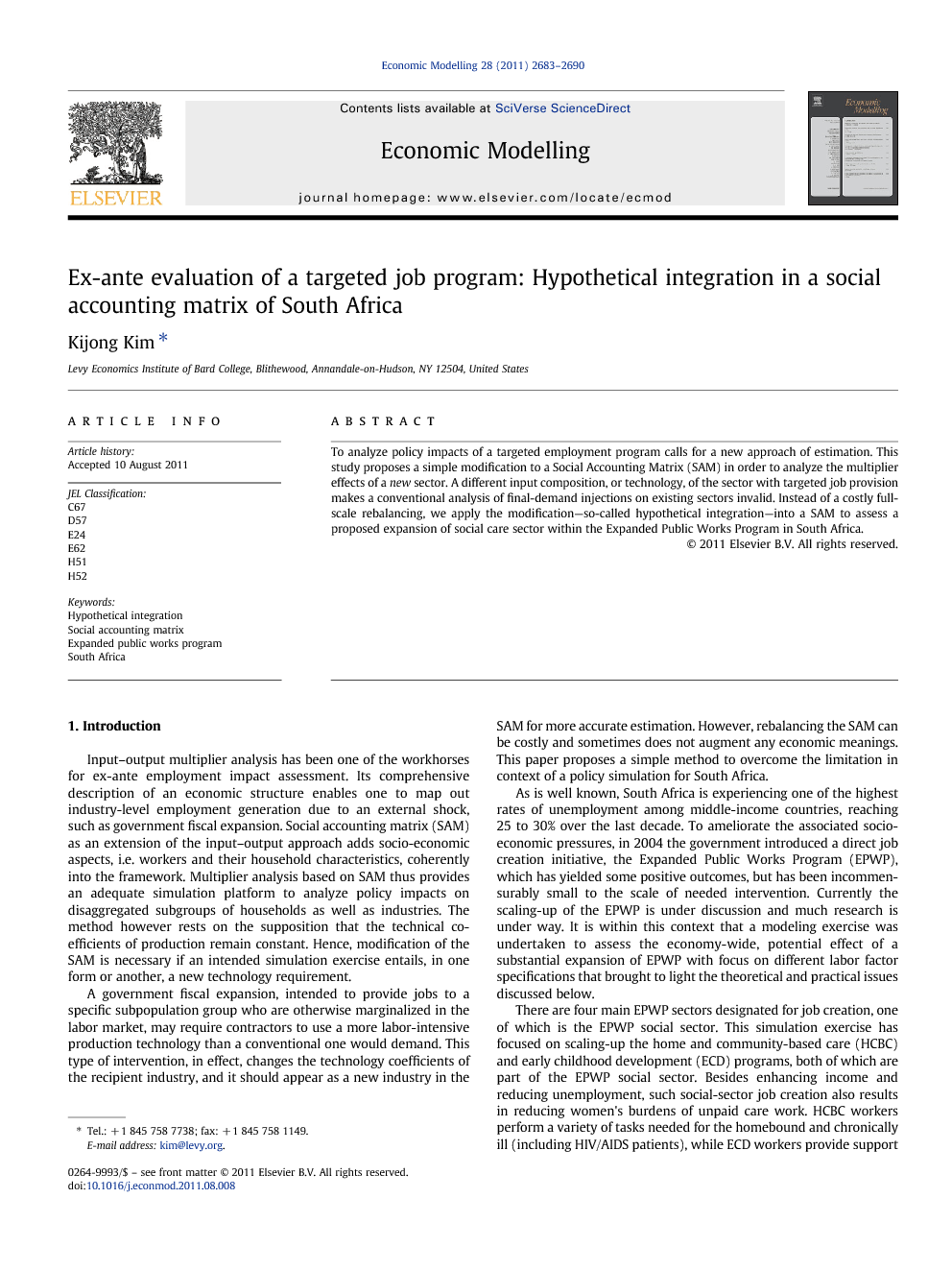 To analyze policy impacts of a targeted employment program calls for a new approach of estimation. This study proposes a simple modification to a Social Accounting Matrix (SAM) in order to analyze the multiplier effects of a new sector. A different input composition, or technology, of the sector with targeted job provision makes a conventional analysis of final-demand injections on existing sectors invalid. Instead of a costly fullscale rebalancing, we apply the modification—so-called hypothetical integration—into a SAM to assess a proposed expansion of social care sector within the Expanded Public Works Program in South Africa.

We simulate and analyze the distributional impact of scaling-up of social service delivery under the Expanded Public Works Program in South Africa (EPWP). The social service includes home and communitybased care and early childhood, and the scaling up expect to provide jobs to unemployed workers in poverty under the auspices of the EPWP. To depict the distributional impact, we use the Social Accounting Matrix (SAM)-based multiplier analysis. The method elucidates the circular flow of funds through which supply and demand of products and factors augment income and expenditure, and in turn expand the economy. The multiplier effect of direct job provision to the poor alleviates high degree of income inequality from racially and spatially biased unemployment. The positive impact however does not come into effect in the analysis, because the SAM is a balanced matrix that delineates only an existing flow of funds, like an accounting table. Simulation of the policy that features a new channel of flows to the poor requires modification of the matrix, preferably without a technical hassle. Reformulation can be simple without compromising the balance of the matrix. A hypothetical input composition—intensive use of unskilled poor workers, for instance—embedded in the policy can add to the matrix as a new sector. The hypothetical integration establishes new channels of flow of funds to poor households from job targeting, and thus increases their employment, and hence, income more than it would be otherwise under the existing unequal income structure. Our comparative analysis demonstrates the pro-poor nature of the job targeting. The method proposed in this paper allows flexible use of the SAM in a policy simulation exercise, in particular, for a large-scale socio-economic policy.