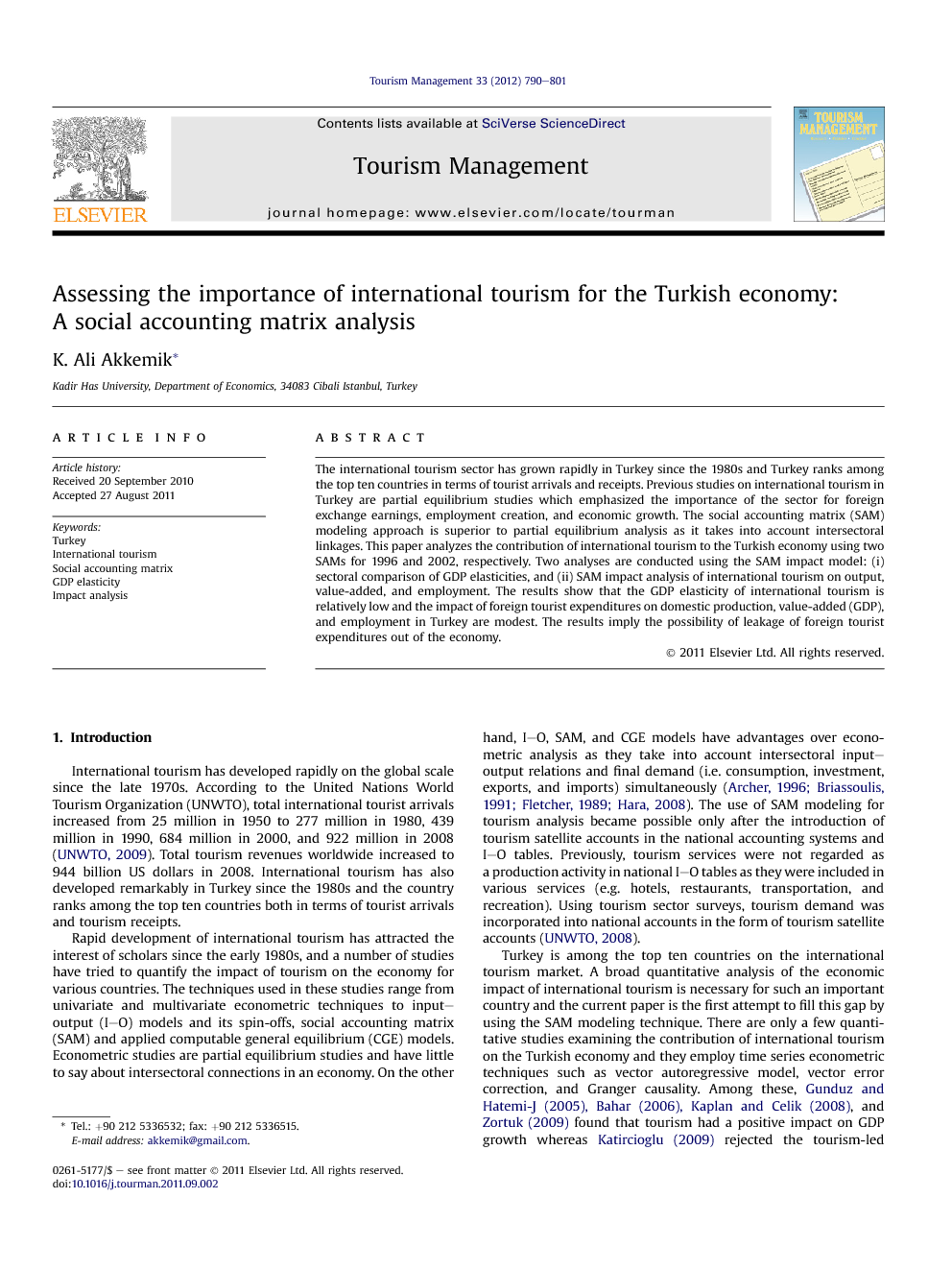 The international tourism sector has grown rapidly in Turkey since the 1980s and Turkey ranks among the top ten countries in terms of tourist arrivals and receipts. Previous studies on international tourism in Turkey are partial equilibrium studies which emphasized the importance of the sector for foreign exchange earnings, employment creation, and economic growth. The social accounting matrix (SAM) modeling approach is superior to partial equilibrium analysis as it takes into account intersectoral linkages. This paper analyzes the contribution of international tourism to the Turkish economy using two SAMs for 1996 and 2002, respectively. Two analyses are conducted using the SAM impact model: (i) sectoral comparison of GDP elasticities, and (ii) SAM impact analysis of international tourism on output, value-added, and employment. The results show that the GDP elasticity of international tourism is relatively low and the impact of foreign tourist expenditures on domestic production, value-added (GDP), and employment in Turkey are modest. The results imply the possibility of leakage of foreign tourist expenditures out of the economy.

International tourism has developed rapidly on the global scale since the late 1970s. According to the United Nations World Tourism Organization (UNWTO), total international tourist arrivals increased from 25 million in 1950 to 277 million in 1980, 439 million in 1990, 684 million in 2000, and 922 million in 2008 (UNWTO, 2009). Total tourism revenues worldwide increased to 944 billion US dollars in 2008. International tourism has also developed remarkably in Turkey since the 1980s and the country ranks among the top ten countries both in terms of tourist arrivals and tourism receipts. Rapid development of international tourism has attracted the interest of scholars since the early 1980s, and a number of studies have tried to quantify the impact of tourism on the economy for various countries. The techniques used in these studies range from univariate and multivariate econometric techniques to inpute output (IeO) models and its spin-offs, social accounting matrix (SAM) and applied computable general equilibrium (CGE) models. Econometric studies are partial equilibrium studies and have little to say about intersectoral connections in an economy. On the other hand, IeO, SAM, and CGE models have advantages over econometric analysis as they take into account intersectoral inpute output relations and final demand (i.e. consumption, investment, exports, and imports) simultaneously (Archer, 1996; Briassoulis, 1991; Fletcher, 1989; Hara, 2008). The use of SAM modeling for tourism analysis became possible only after the introduction of tourism satellite accounts in the national accounting systems and IeO tables. Previously, tourism services were not regarded as a production activity in national IeO tables as they were included in various services (e.g. hotels, restaurants, transportation, and recreation). Using tourism sector surveys, tourism demand was incorporated into national accounts in the form of tourism satellite accounts (UNWTO, 2008). Turkey is among the top ten countries on the international tourism market. A broad quantitative analysis of the economic impact of international tourism is necessary for such an important country and the current paper is the first attempt to fill this gap by using the SAM modeling technique. There are only a few quantitative studies examining the contribution of international tourism on the Turkish economy and they employ time series econometric techniques such as vector autoregressive model, vector error correction, and Granger causality. Among these, Gunduz and Hatemi-J (2005), Bahar (2006), Kaplan and Celik (2008), and Zortuk (2009) found that tourism had a positive impact on GDP growth whereas Katircioglu (2009) rejected the tourism-led growth hypothesis. In addition, Onder and Durgun (2008) found a positive impact of tourism on employment. These studies praise tourism as an earner of foreign exchange, contributor to employment creation, and facilitator of economic growth. However, they ignore intersectoral interactions despite backward linkages of the tourism sector found by inputeoutput studies for various countries. This paper builds on previous SAM studies (Defourney & Thorbecke, 1984; Oosterhaven & Fan, 2006) that examine the impact of tourism on the economy and aims to answer the following three research questions by using the SAM impact model: (i) to what extent did international tourism contribute to GDP in Turkey?; (ii) to what extent did international tourism contribute to employment growth in Turkey?; (iii) through what sort of intersectoral relations did international tourism contribute to employment and GDP? To this end, two SAMs are built for 1996 and 2002 through very careful treatment of the data obtained from inpute output tables, tourism statistics, and related other data. Due to lack of data on transport and trade margins in the previous inputeoutput tables, SAMs could be constructed only for 1996 and 2002.1 The results obtained for these two years are compared to investigate if there were significant changes over time. Macroeconomic consequences of changes in tourism demand may be significant for policymakers in a developing country like Turkey due to growth and development objectives of tourism policies. Successful tourism strategies are deemed as those that create jobs and lead to higher economic growth. The remainder of the paper is organized as follows. In the next section, development of the international tourism sector and tourism policies in Turkey is briefly explained. Section 3 reviews the literature on the economic impacts of tourism. Section 4 sets out the methodology of the social accounting matrix analysis. The results of the analysis are presented and interpreted with a policy discussion in Section 5. Finally, Section 6 wraps up and concludes.

In this paper, the importance of international tourism for the Turkish economy is investigated from two perspectives: (i) sectoral comparisons of GDP elasticities, and (ii) calculation of the impact of the international tourism sector on output, value-added (GDP), and employment. These analyses were conducted using the SAMs for 1996 and 2002. The findings draw a somewhat negative picture for the contribution of international tourismto the economy, but the results of the analyses have important policy implications. Although international tourism was generally deemed as an important sector in previous studies, the impact of foreign tourist expenditures on domestic production, value-added (GDP), and employment in Turkey can be best described as modest. In addition, compared to international tourism, domestic tourism activities are found to be more important in terms of GDP elasticity, which indicates the need to diversify tourism activities. Tosun et al. (2003, pp. 154e155) argued that domestic tourism can be used as a cushion to overcome a possible crisis due to unexpected negative demand shocks. In addition, Seckelmann (2002) argued that the development of domestic tourism may help improve inter-regional inequalities. More attention should be paid by the government to domestic tourism. Domestic tourism can be seen as a substitute for international tourism on the condition that domestic tourists have a smaller propensity to spend on imported goods and services than foreign tourists. Another important policy recommendation is to put in place effective long-term strategies to promote domestic resource use in order to reap the benefits of foreign tourist expenditures. The reason for a weak contribution of international tourism to the economic growth can also be sought in structural problems related to the role played by tour operators and the problems related to the way of doing business. Foreign tour operators in Europe control the demand side of the international tourism business by promoting the western and eastern coasts, which are endowed with rich natural resources for the sun-sea-sand tourism (Tosun et al., 2003, pp. 134e135). Turkey’s comparative advantage in international tourism sector is the low costs of providing various services which helps attract more tourists from Europe through package tours offered by foreign tour operators. As a result, the government favors coastal regions in allocating incentives and funds devoted to the development of tourism to the detriment of the other segments of international tourism, such as culture tourism in which Turkey is also well-endowed. Empirical studies tend to emphasize the positive contribution of foreign tourist expenditures on the economy through backward linkages which increase domestic production and demand for domestic inputs. The results of this paper imply that this mechanism largely fails to work in Turkey. This brings about the possibility of the leakage of foreign tourist expenditures out of the economy albeit only partially. In this regard, it is important to examine the relation between goods and services imports and foreign tourist expenditures. If part of foreign tourist expenditures, such as accommodation, restaurants, daily necessities, and transportation, are directed to imported goods and services, then part of the revenues from international tourism leak out and fail to have a favorable impact on domestic production and employment. Due to lack of data on the expenditures of foreign tourists on imported goods, at this stage, it is not possible to quantify the extent of the leakage of tourist expenditures. This paper examines the importance of tourism demand for the Turkish economy by using SAM impact analysis. Applied general equilibrium assessment of the government’s international tourism policies such as those reported in the strategy paper of the Turkish Ministry of Culture and Tourism titled Tourism Strategy of Turkey e 2023 (MCT, 2007) remains a future research topic. Furthermore, regional impacts of foreign tourist expenditures can be investigated using the currently unavailable regional SAMs. Empirical analysis of poverty and income distribution across different types of households is beyond the scope of this paper, but they remain as important future research areas. The empirical results of this paper should be interpreted with caution due to several limitations regarding the assumptions of the SAM model data availability. The SAMmodel is an extended version of the linear IeO model where changes stimulated by exogenous shocks are average rather than marginal changes. In addition, lack of longitudinal tourism data, especially tourism satellite accounts, poses an important limitation to tourism studies in Turkey. Tourism satellite accounts are available only for 1996e1998 and 2001e2003, and IeO tables are available for 1996 and 2002. Economic conditions have changed since 2002 and it is necessary to analyze more recent developments in international tourism activities. For this purpose, there is a need for a more recent IeO table which has a higher level of sectoral disaggregation, especially regarding tourism and tourism-related sectors. In particular, it is important to note that construction of the missing international tourism data was possible only by making several assumptions such as the tourism ratio. With the availability of more recent data, the analysis can be extended beyond 2002.