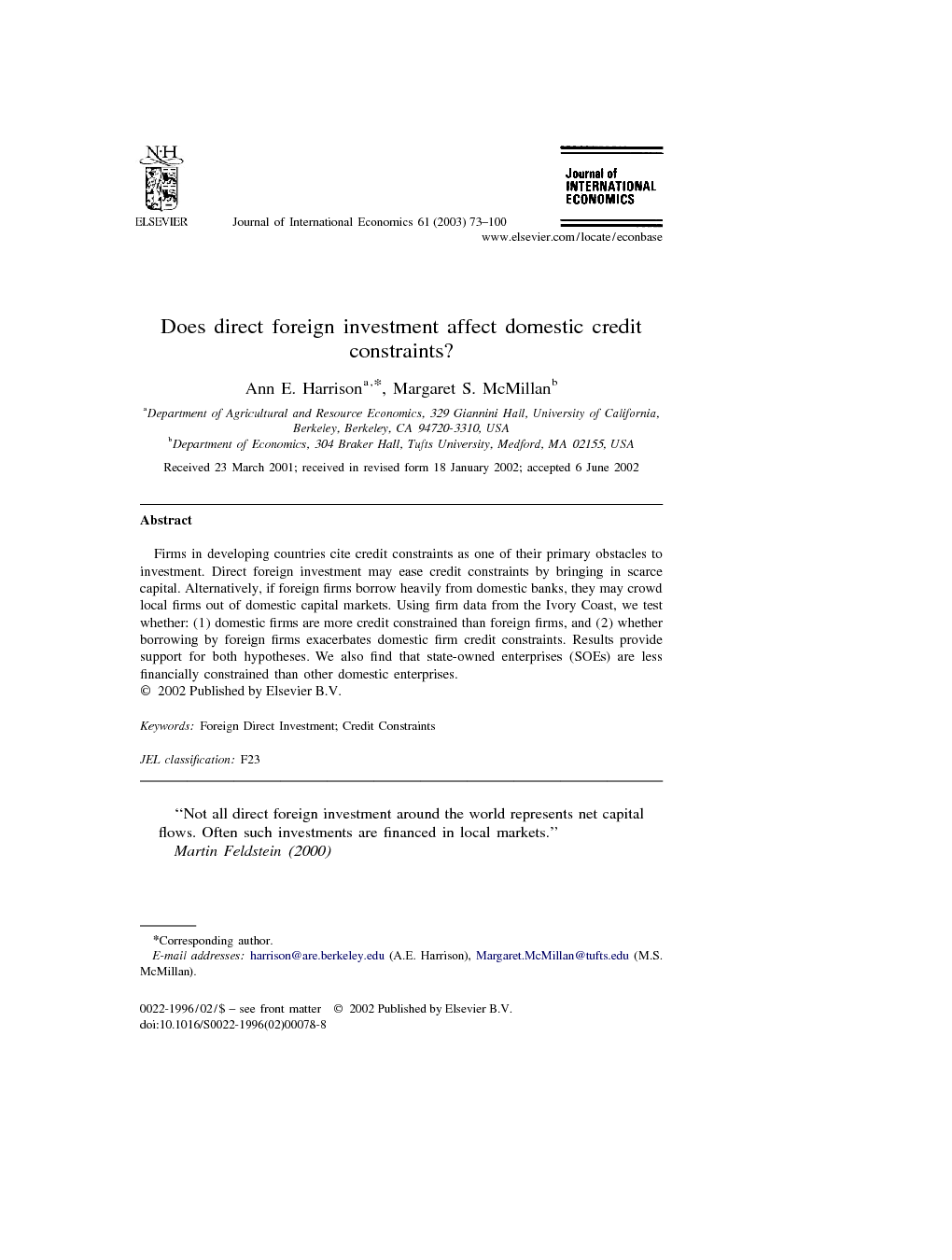 In this paper, we attempt to answer a question, which has not been addressed elsewhere: does the entry of foreign enterprises in developing country credit markets hurt their domestic competitors? Although foreign investment conveys benefits by bringing in scarce capital, those benefits may be mitigated if foreign enterprises crowd out domestic enterprises in the local credit markets. Our results suggest a difference between the credit constraints faced by domestic and foreign firms. In addition, we find that one major reason why domestic enterprises are more credit constrained than their foreign counterparts in the same sector is due to crowding out by foreign entrants. Further, we find that one contributing factor is that foreign firms are more profitable and more liquid. Hence, foreign firms might be a better investment for local banks than domestic firms. Nevertheless, our results remain even after we control for the higher profitability of foreign enterprises. In other words, even after controlling for the profitability of foreign firms, domestic enterprises are still “crowded out” by their foreign competitors. We also examine the performance of state-owned enterprises (SOEs) relative to their private sector counterparts. For SOEs, debt to asset measures and interest coverage do not significantly affect investment, indicating that SOEs are not credit constrained. Nor is there any evidence that they are affected by foreign borrowing on domestic credit markets. These results suggest that SOEs are not credit constrained, perhaps because during this period they could be characterized by being subject to a soft budget constraint. In addition, SOEs are not crowded out by foreign enterprises of domestic credit markets, in contrast to their private sector counterparts. We explore whether our results on crowding out could be due to unobserved factors, such as increased competition from foreign enterprises or differences in firms’ size. Our results suggest that this is not the case. Although the Ivory Coast may be an unusual case, our empirical results suggest that policy makers should be cautious in assuming that foreign investors expand credit opportunities for domestic enterprises. In the Ivory Coast, foreign investors certainly eased credit constraints for firms with foreign investment, but firms which did not receive foreign investment became more credit constrained. These results are probably driven by a number of factors. First, interest rates were set below market rates, which led to credit rationing. This led foreign investors to borrow heavily on local credit markets, and at the same time encouraged banks to lend to less risky investors, since margins were low. Second, the banking sector was highly concentrated and dominated by firms with ties to French banks, which were probably biased towards lending to foreign firms.