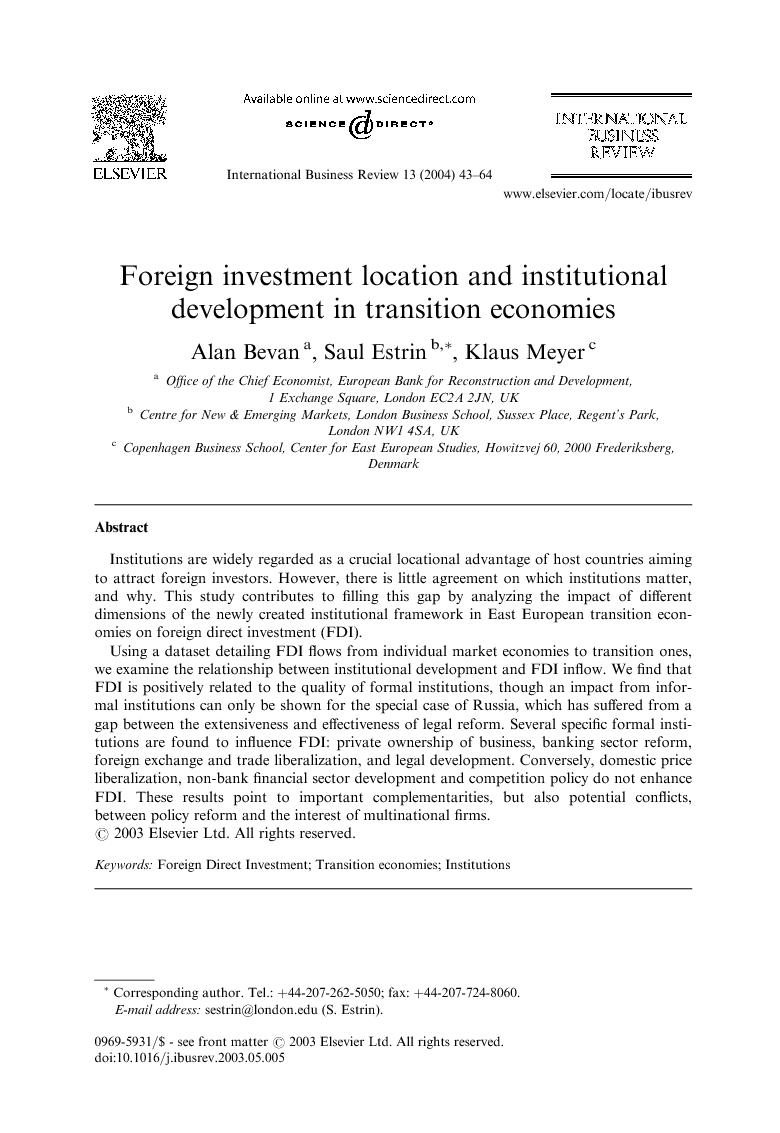 Institutions are widely regarded as a crucial locational advantage of host countries aiming to attract foreign investors. However, there is little agreement on which institutions matter, and why. This study contributes to filling this gap by analyzing the impact of different dimensions of the newly created institutional framework in East European transition economies on foreign direct investment (FDI). Using a dataset detailing FDI flows from individual market economies to transition ones, we examine the relationship between institutional development and FDI inflow. We find that FDI is positively related to the quality of formal institutions, though an impact from informal institutions can only be shown for the special case of Russia, which has suffered from a gap between the extensiveness and effectiveness of legal reform. Several specific formal institutions are found to influence FDI: private ownership of business, banking sector reform, foreign exchange and trade liberalization, and legal development. Conversely, domestic price liberalization, non-bank financial sector development and competition policy do not enhance FDI. These results point to important complementarities, but also potential conflicts, between policy reform and the interest of multinational firms.

Foreign direct investors view institutions as an important aspect of the locational advantages of a potential host country. They form part of the “created assets” of countries, and have arguably become increasingly significant relative to more conventional “natural assets”, like raw materials or cheap labor (Narula and Dunning, 2000 and United Nations, 2002). The specific features of formal institutions shape the incentives faced by private businesses, and in consequence have been found to influence the extent of foreign direct investment (FDI) (Henisz, 2000, Mudambi and Navarra, 2002 and Ramamurti, 2001). Hoskisson, Eden, Lau and Wright (2000: p. 252) argue that institutional theory should be “preeminent in helping explain impacts on enterprise strategies” in emerging markets. Economic institutions establish the incentives faced by domestic economic actors as well as foreign investors (North, 1990). In this spirit, institutional variables such as government policy (Gomes-Casseres, 1991), intellectual property rights protection (e.g. Oxley, 1999) or political risk (e.g. Henisz, 2000) have been incorporated in the study of foreign investment strategies, notably entry mode choice. However, prior to deciding how to enter, investors have to decide where to invest; the institutional framework has an equally if not more important influence on locational choice. Since Guisinger (1985), the impact of different aspects of the institutional framework on inward FDI has rarely been addressed. Transition economies are an interesting context to explore the impact of institution building because the entire set of formal institutions has been remodeled in the 1990s. A distinct yet diverse business environment has evolved in the process of transition from socialist planning to the market economy (Meyer, 2001a). The institutions reflect both the heritage of communist ownership and the need to build market interactions from scratch, including private ownership, a system of private property, capital markets and an appropriate legal and institutional infrastructure. Critical scholars like Kogut and Spicer (2002), and Stiglitz (1999) have argued that the establishment of new institutions is at least as important as more conventional macroeconomic policy objectives. The consistency and completeness of institutions influence the strategies of previously state-owned firms before and after privatization (e.g. Peng, 2000 and White and Linden, 2002), the creation of new firms (McDermott, 2002) and the strategies of foreign investors (Henisz, 2000). However, the interactions between national economic institutions and enterprise level organizational strategies are still under-researched (Mudambi & Navarra, 2002). This is particular relevant for emerging markets because the underlying economic mechanisms are typically underdeveloped (see e.g. Clague, 1997 and Harriss, Hunter and Lewis, 1995). Research in transition economies has started to analyze how institutions influence strategies by foreign investors, notably their entry modes (Henisz, 2000 and Meyer, 2001b). This research shows the importance of institutional development, yet only at an aggregate level. We extend this work by differentiating institutions in host transition economies that may impact on inward FDI. We seek to explain, in a comparative perspective, the aspects of institutional development that provide a significant determinant of FDI receipts. The analysis is based on data of bilateral FDI flows between 1994 and 1998 from the major source countries to the 10 EU accession candidates from Central Europe plus Russia and the Ukraine, thus covering the bulk of FDI to the region over this period (see Bevan & Estrin, 2000). We find that institutional development in general enhances FDI receipts, and further identify specific institutions with positive influence: private sector growth; development of the banking sector; foreign exchange and trade liberalization; and legal development. In contrast, the development of the financial sector outside banking, domestic price liberalization and competition policy does not appear to enhance FDI. These results point to complementarities as well as potential conflicts between policy reform and the attraction of FDI. This paper is structured as follows: in Section 2, we consider, at a theoretical level, the interaction of FDI with institutions and locational advantages and develop hypotheses. Our methodology and data are considered in Section 3, the empirical analysis is contained in Section 4 and Section 5 concludes.

Our analysis of the impact of institutional development on FDI in transition economies indicates that the hypothesized relationship does hold at an aggregate level. We also identify individual key factors by disaggregating to subsets of institutional development. The results suggest that several institutional changes have particularly enhanced FDI receipts to transition economies: • Development of private-owned businesses in place of state-owned firms; • Development of the banking sector, but not necessarily the non-banking financial sector; • Liberalization of foreign exchange and trade, but not necessarily of domestic markets and prices; • Development of legal institutions, but not necessarily competition policy. However, domestic price liberalization and the development of competition policy do not appear, in our equations, to be significant in motivating FDI, perhaps because some foreign investors have been attracted by the possibility of earning monopoly rents. Insofar as we could address the question, we also did not find strong evidence for the importance of informal institutions, once formal institutions have been controlled for. This could imply that development of formal institutions in transition economies has been associated with the emergence of informal ones, with the one important exception of Russia. These results are highly suggestive of the influence of institutional development on inward foreign investment. Foreign investors appear to react positively to government policy that facilitates both exploitation and augmentation of their own resources and capabilities. Hence, foreign investors and host governments have complementary interests with respect to some policy measures and institutional development, yet conflicting interests on other items (Rugman & Verbecke, 2001). Our study points out where collaboration between foreign investors and local policy makers may foster institutional development, namely in private sector development, banking sector reform, liberalization of foreign trade and investment, and strengthening of the legal framework. However, policy makers also have to be aware that what is good for domestic economic development does not necessarily attract more foreign investors. For example, competition policy eases entry, but it makes it less attractive for a foreign firm to acquire an incumbent monopolist. Governments privatizing telecommunications face the trade-off, as liberalization would reduce prices for consumers, but it might also deter potential foreign investors or reduce the receipts from selling as an entity the incumbent state-owned monopoly provider. Future theoretical research may thus focus on the potentially conflicting interests of foreign and domestic businesses with respect to institutional development. A limitation of this study, as with other studies incorporating institutional variables in an empirical model, is the interdependence, and thus correlation, between different aspects of the institutional framework. We offer a methodology to make progress toward disentangling the effects of different institutions. However, future empirical research might usefully try to analyze a larger and possibly a more diverse set than our 26 countries. Future research may also address related conceptual issues. Firstly, theoretical research has pointed to the importance of informal institutions (Mudambi and Navarra, 2002, North, 1990 and Peng, 2000), while empirical research faced considerable obstacles in developing suitable proxies for these concepts. New, creative proxies such as the legal effectiveness measure, and corruption indices may advance this line of inquiry. Moreover, the concept of legal effectiveness as informal institution merits further investigation, building for instance on recent work by Murrell (2001) who presents a favorable image of law in Russia, yet with some flaws that may be crucial for business. Secondly, one might argue that FDI positively influences institutional development, and private sector development in particular. Such possible reverse causality would be clarified by using longer time periods and panel estimation, a luxury not yet available for the transition economies where reform only commenced during the 1990s.