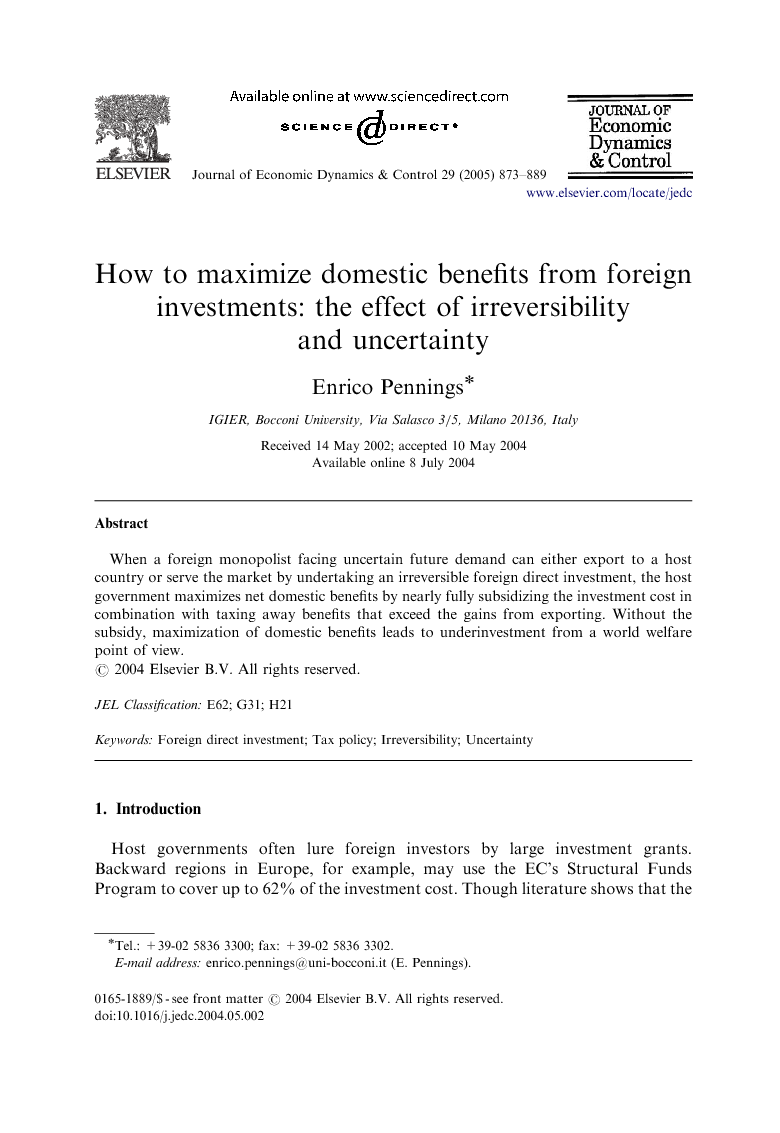 When a foreign monopolist facing uncertain future demand can either export to a host country or serve the market by undertaking an irreversible foreign direct investment, the host government maximizes net domestic benefits by nearly fully subsidizing the investment cost in combination with taxing away benefits that exceed the gains from exporting. Without the subsidy, maximization of domestic benefits leads to underinvestment from a world welfare point of view.

This paper challenges the widespread idea that state aid across the world should be reduced unconditionally. Given some level of corporate taxation, the efficient level of investment can only be obtained by an investment subsidy. Policy proposals to reduce state aid that include a reduction in the maximum allowed capital grant would only have limited effect on the socially optimal flow of FDI if corporate tax rates decrease or tax holidays are left out of the policy reform. Considering the implementation of the optimal tax and tariff policy, it seems that less developed countries often lack capital to implement a tax rule in which an investment grant is paid prior to the receipt of tax income. Still, paying a part of the sunk cost drastically reduces the investment deterring effect of profit taxation and uncertainty alike, and leads to higher gains for the host country. So, if the host country is credit constrained, there is a profitable role for international organizations to finance and recoup the cost of the investment, while the host country can benefit from potential spillovers. With respect to the modeling, an obvious extension is including an active role for the home government of the foreign firm and examining imperfect competition. A model of multiple firms operating in oligopoly and trading off exports and FDI would be severely more complicated, but probably would not change the basic results derived in this paper. The main results in this paper stem from the tariff-jumping argument and the differential effect of profit taxes and lump-sum taxes on irreversible investments. From Brander and Spencer (1984), we know that only the magnitude of the optimal tariff changes when allowing for more than one firm. Also, from Dixit and Pindyck (1994), in a Stackelberg duopoly the significance of uncertainty on the value of waiting to invest is reduced, but the sunk cost effect remains. We leave an exact formulation of this topic for further research.