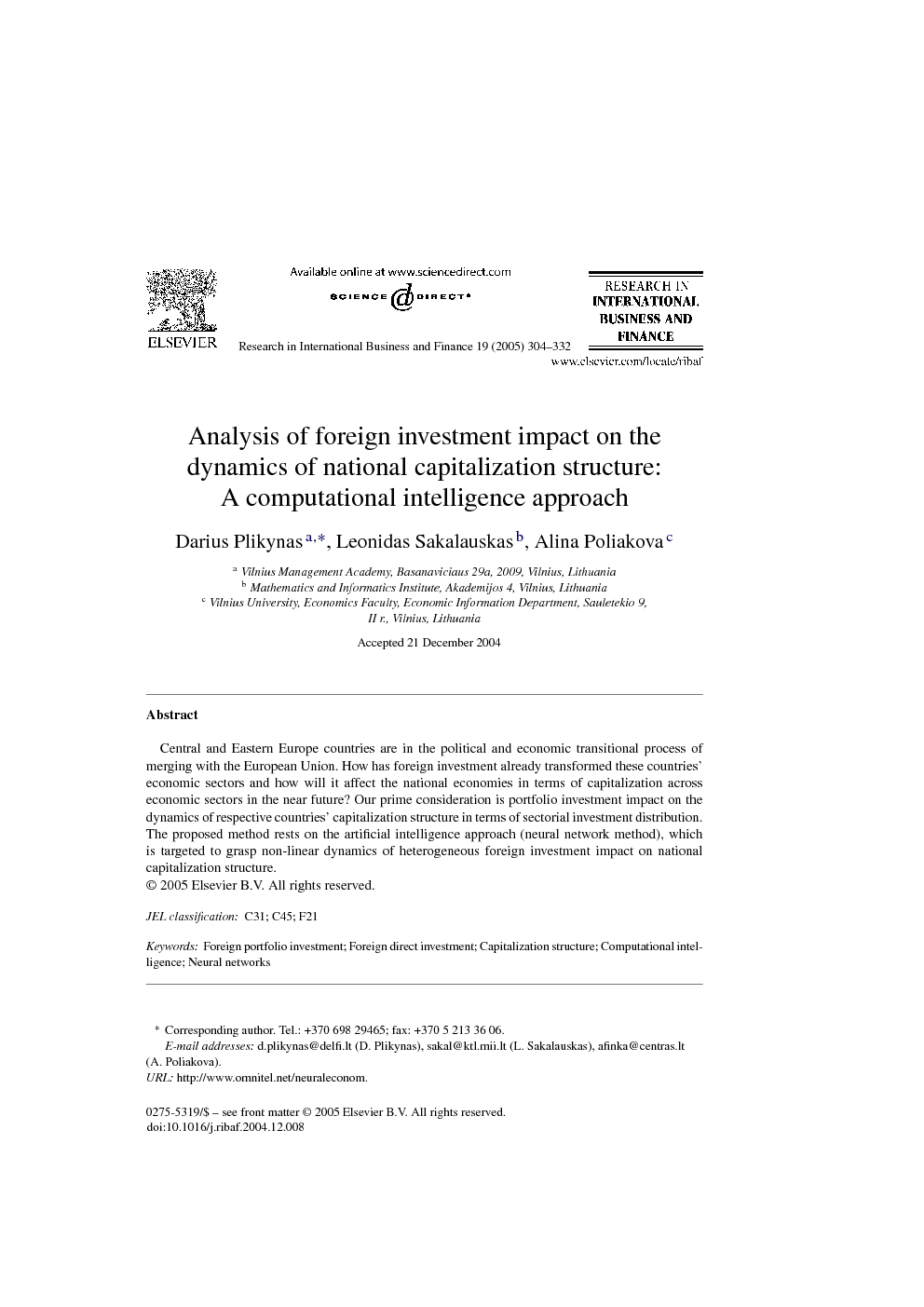 Central and Eastern Europe countries are in the political and economic transitional process of merging with the European Union. How has foreign investment already transformed these countries’ economic sectors and how will it affect the national economies in terms of capitalization across economic sectors in the near future? Our prime consideration is portfolio investment impact on the dynamics of respective countries’ capitalization structure in terms of sectorial investment distribution. The proposed method rests on the artificial intelligence approach (neural network method), which is targeted to grasp non-linear dynamics of heterogeneous foreign investment impact on national capitalization structure.

The theme has been chosen in response to an increasing demand from the investment community for national versus global economic sector analysis. Although a global trend, sector investing has become particularly popular in Europe, partly due to the creation of EMU which has resulted in a significant reduction in trade barriers, together with the increase in M&A activity. The research conducted by Merrill Lynch/Gallup (Morgan Stanley Dean Witter & Co, 2004) has shown that in Europe, 63% of funds are now allocated on a sector basis, up from 22% in 1997. While sector investing is more mature in Europe, we also see substantially increasing use of sector investing and analysis in the US and Asia Pacific. This paper aims to investigate investment inflows to the Eastern Europe region. Since the late 1990s, a fundamental shift has occurred in the pattern of private sector financial flows to developing countries. Debt flows have fallen sharply, while equity flows – mainly in the form of foreign direct investment – have remained comparatively robust. This shift from debt to equity should diminish the volatility of developing countries’ external finance and improve their access to technology, markets, and management expertise. However, much more needs to be done to put finance development on a stable basis. The decline in debt flows, coupled with weak export revenues, has placed enormous pressure on the middle-income, highly indebted countries (Aykut et al., 2003). In recent years, Multilateral Investment Agreement (MIA) directly influences dynamics of national capitalization structure. MIA proposed by the EC in the WTO (2001) aims at eliminating all flexibility which a country may have at present to permit foreign investment and allocate FDI to priority sectors; to discourage or stop altogether the flow of foreign investments in sectors where such investment is not considered desirable or appropriate; to provide special preferences for domestic investment and stipulate conditions for FDI, like ceiling on equity, restrictions on ownership and so on (Aykut et al., 2003). Investors will thus have freedom without any responsibility, except in respect of their own profits. The implementation of the obligations of governments is sought to be ensured by locating the MIA in the WTO, so that for any perceived infringement, actions can be taken against exports of the country. Some industrialized countries are pressing for a multilateral discipline. The main reason is that they want to eliminate or, at least, constrict the powers of host governments regarding the choice of the priority sectors for FDI and the imposition of conditions on such investments, so that foreign investors are able to operate unencumbered by such constraints. These and many other economic policy matters constitute nowadays investment actualities. Meanwhile, our primary concern here is not about investment policies, but rather about narrow technical aspects of sectorial investment analyses. Many researches are concerned about the appropriateness of traditional research methods in the today's complex environment (Winston, 2004). This paper also provides insights and an overview for employment of the computational intelligence approach (CIA: computational intelligence approach has been applied using two types of neural networks architectures; MLP: backpropagation multilayer perceptron net for learning and SOM: self-organizing maps for clustering), which helps to shed new light on the heterogeneous nature of investment dynamics. We hereinafter propose interdisciplinary approach, which embraces finance theory, econometric and computational intelligence methods. The focus of this paper is on evaluating how computational intelligence approach (CIA) and NN in particular might be employed for the investigation of non-stationary and complex investment market behavior. It considerably eases investigation of the otherwise too complex reality. The remainder of the paper is organized as follows: Section 2 briefly discusses the scope of the problem domain, Section 3 subsequently describes methodical issues and statistical results from the application of the sectorial indices formation technique and investigates Global, EU and regional trends of investments to the economic sectors, Section 4 focuses on evaluating how computational intelligence approach (CIA) and neural networks (NN) in particular might be employed for the investigation of non-stationary and complex investment market behavior, Section 5 describes the original technology developed for SI weights estimation using NN methods and Section 6 finally concludes.

This research highlighted several important technical and statistical problems, which do not allow having a single view of foreign investment impact to capitalization distribution across economic sectors. Notwithstanding methodological differences, the authors have arranged regional (LNSE & WSE) and Europe (FTSE) or global sectorial indices. In the case of LNSE market, sectorial indices were generated for the first time. A number of theoretical and empirical studies have revealed that SI (sectorial indices) give an immediate and accurate representation of investment climate in each sector. Financial analysts and investors use them as a powerful tool for the decision-making by comparing trends in the movements of investments to the economic sectors inside a single country or across wide regions. We have performed SI movement analyses for Lithuania, Polish, EU and Global investment markets, which has revealed common patterns and disparities across regions and sectors. The ultimate result of this data analyses is a universally applicable model aimed at the non-traditional estimation of sectorial indices weights according to the relative capitalization of the economic sectors. The novelty of the proposed model lays in the application of neural network methods, which were thoroughly designed for the sectorial indices’ weights estimation. To our knowledge, there is no experiment in the field of that would focus on the NN mechanisms of SI weights estimation in such an experimental setting. To summarize, the proposed model estimates the NN weights dynamics and interprets them in a special way giving non-linear estimations for the alternative assessment of SI weights. We found and distinguished five different cases for SI non-linear weights’ estimation. The empirical results provided an insight into the combined effect using additional factors in explaining the sectorial indices relative weight in the dynamics of the whole market index movements. The overall NN research framework developed into the software capable considerably to automate the whole research process. The results of the new approach decidedly outperformed the multidimensional linear regression forecasting performance. The authors argue that the novel approach to the analyses of capitalization weighted SI dynamics, based on their proposed CIA framework, will extend the assessment power of the non-linearities present in a nowadays volatile economic sectors’ investment environment. The authors have to admit that a very wide scope of this study cannot be fully covered in the framework of a single paper. Some other results will be submitted in the next paper due to the need for extensive empirical validation of a new approach. This mainly concerns SI weights estimations in other SE markets (WSE, FTSE) and for FDI case.