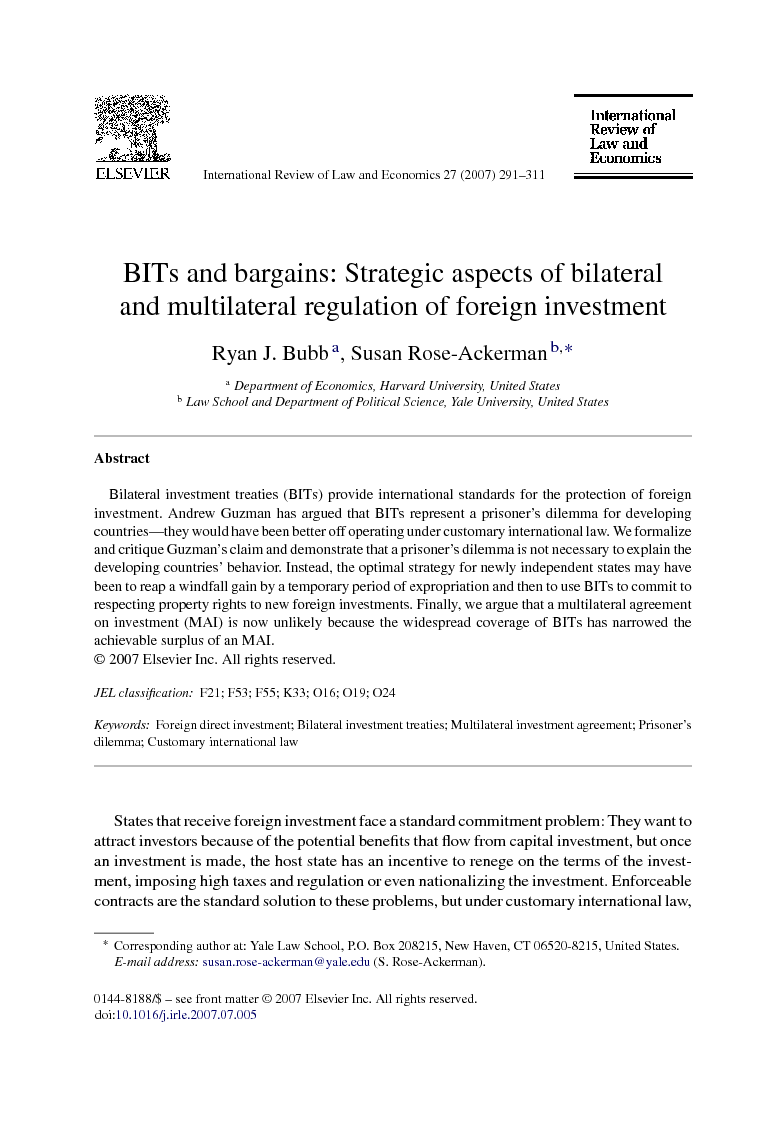 Bilateral investment treaties (BITs) provide international standards for the protection of foreign investment. Andrew Guzman has argued that BITs represent a prisoner's dilemma for developing countries—they would have been better off operating under customary international law. We formalize and critique Guzman's claim and demonstrate that a prisoner's dilemma is not necessary to explain the developing countries’ behavior. Instead, the optimal strategy for newly independent states may have been to reap a windfall gain by a temporary period of expropriation and then to use BITs to commit to respecting property rights to new foreign investments. Finally, we argue that a multilateral agreement on investment (MAI) is now unlikely because the widespread coverage of BITs has narrowed the achievable surplus of an MAI.

States that receive foreign investment face a standard commitment problem: They want to attract investors because of the potential benefits that flow from capital investment, but once an investment is made, the host state has an incentive to renege on the terms of the investment, imposing high taxes and regulation or even nationalizing the investment. Enforceable contracts are the standard solution to these problems, but under customary international law, contracts between private investors and states are of dubious enforceability. Over the past 50 years, bilateral investment treaties (BITs) have emerged to fill this lacuna of international law by providing international standards for the treatment of foreign investments, a pacta sunt servanda (“pacts must be respected”) for host states vis-à-vis foreign investors, and an international dispute resolution process for enforcing those standards. The history of the international legal regulation of foreign investment suggests that the current patchwork regime of BITs resulted from the strategic decisions of capital importers and exporters. Andrew Guzman provides the seminal discussion of the impact of BITs in a 1998 paper entitled “Why LDCs Sign Treaties that Hurt Them.” He argues that, on the margin, low-income countries find that signing a BIT is better than refusing to sign, but that a regime where BITs cover the world is worse for developing countries than a regime in which BITs do not exist. This is an important claim because the number of BITs has risen rapidly in recent years to about 2500 at the end of 2005. They are major instruments for the governance of cross-border investment. Furthermore, the United Nations Conference on Trade and Development (UNCTAD) has supported the BIT regime, organizing meetings in which developing and transitional countries sign BITs, not only with developed nations but also with each other (United Nations Conference on Trade and Development [UNCTAD], 2000). If this effort might do more harm than good, then it is important to understand how that could be so. Guzman's basic argument is that a multi-party “prisoner's dilemma” exists under which each developing country has an incentive to sign BITs with developed countries that may supply foreign direct investment (FDI) or other types of investment capital (Guzman, 1998, pp. 666–667). At any point in time, the benefits to a less developed country of signing a BIT with a wealthier country may exceed the value of staying out and losing investment funds to rival countries. However, once all become part of a system that protects outside investors, BITs do not give any less-developed country a competitive advantage over any other, and most of the surplus from foreign investment is transferred to the investors. Thus, developing countries might be better off if the option of signing BITs were not available. Of course, as Guzman recognizes, the BITs regime may be better for developing countries than a no-BIT regime if the overall level of investment flowing to developing countries is sufficiently increased—the net result depends upon the relative magnitudes of the increased total flow of investment versus the lower benefits earned by developing countries per dollar of investment. But Guzman argues that the initial resistance of developing countries to rules of customary international law that protect foreign investment implies that the latter effect dominates, making developing countries worse off. As Guzman notes, his argument is a direct application of work on competitive markets and its extension to the inter-state competition for investment (Guzman, 1998, p. 672). The inter-governmental literature demonstrates both that competition can limit rent seeking by individual governments, but that, at the same time, it favors mobile owners of capital who can pick their locations (Rose-Ackerman & Engel, 2001; Rose-Ackerman & Rodden, 1997). Inter-state competition for investment funds can limit the benefits obtained by governments and their taxpayers. This paper builds on and critiques Guzman's analysis. We first formalize Guzman's argument using a simple stylized model of BIT signings. Our analysis clarifies the assumptions behind Guzman's paper and also demonstrates weaknesses in his analysis. Given our critique of Guzman's model, we propose an alternative explanation for the initial resistance of developing countries to international rules protecting foreign investment and the subsequent rapid increase in BITs. In particular, we argue that the optimal strategy for newly independent states may have been to reap a windfall gain by a temporary period of expropriation and then to use BITs to commit to respecting the property rights of foreign investors going forward. We then discuss an issue that Guzman only raises in passing. Despite the proliferation of bilateral agreements, attempts to create a multilateral agreement on investment (MAI) have foundered. Why is this so? One might have thought that as the number of very similar bilateral arrangements increased, a multilateral agreement would become easier, not harder, to accomplish. An MAI is a third option distinct from both a regime of customary international law and a system with broad BIT coverage. Guzman argues that the failure to conclude an MAI arises from the unwillingness of developing countries to assent to a multilateral instrument, and he argues that this further supports his hypothesis that international legal protections for foreign investment make developing countries worse off. He also argues that once BITs are in place, these same countries may prefer an MAI to a widespread BITs regime.1 In contrast, we argue that a multilateral investment regime is less likely to arise once many BITs are in place. The widespread coverage of BITs narrows the surplus achievable by an MAI and may make potential signatories less willing to bear the costs of hammering out an agreement. Section 1 gives a brief history of the evolution of the international law governing foreign investment and provides a strategic explanation for why developing countries individually signed BITs while collectively opposing the incorporation of a similar regime into customary international law. Section 2 formalizes this strategic explanation of BITs as a non-cooperative game. Section 3 considers the implications of the BIT model for the likelihood of a multilateral agreement on foreign investment. Section 4 concludes.

Guzman's (1998) strategic analysis of BIT signings provides a convincing explanation for the explosion of BITs, and the BIT model presented in this paper formalizes his account. Our model, however, permits one to see the limitations of Guzman's formulation. We model the unraveling mechanism and derive conditions under which the resulting equilibria make developing countries worse off. Guzman is mistaken in his claim that the resistance of poor countries to the Hull Rule in customary international law implies that the BITs regime is worse for developing countries than customary international law. The initial resistance of developing countries to strong protections of foreign investment in customary international law may instead have resulted from opportunistic one-time expropriations, followed by commitments to respect property rights in the future, rather than from a welfare loss caused by the patchwork BIT regime. Given the strong protections provided by the current BIT regime to foreign investors, and the resistance to full liberalization of inward investment by some developed states, it seems unlikely that an MAI will be concluded. Any such instrument would have to provide protections to foreign investors at least as strong as those provided in a typical BIT, yet such an agreement is unpalatable to some developed states.