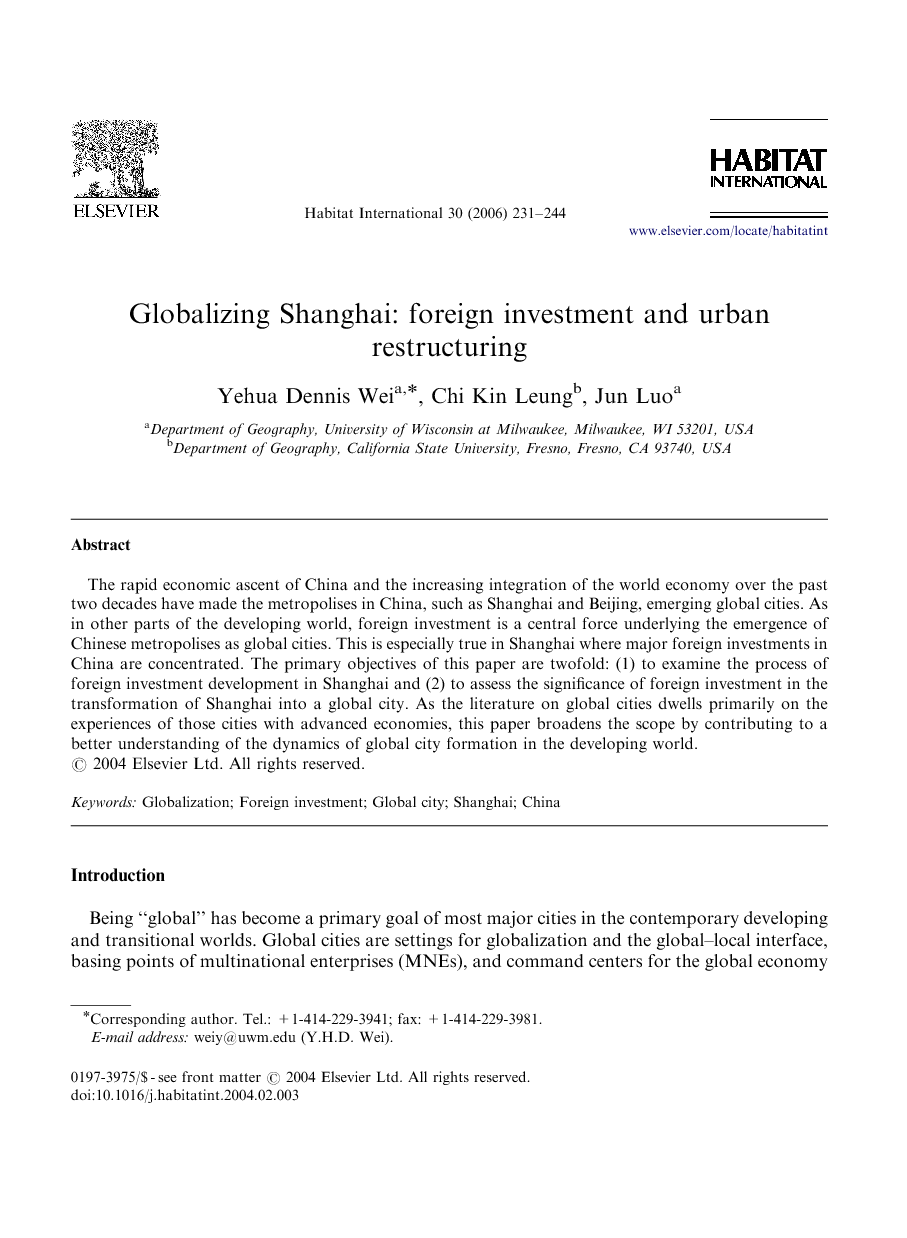 The rapid economic ascent of China and the increasing integration of the world economy over the past two decades have made the metropolises in China, such as Shanghai and Beijing, emerging global cities. As in other parts of the developing world, foreign investment is a central force underlying the emergence of Chinese metropolises as global cities. This is especially true in Shanghai where major foreign investments in China are concentrated. The primary objectives of this paper are twofold: (1) to examine the process of foreign investment development in Shanghai and (2) to assess the significance of foreign investment in the transformation of Shanghai into a global city. As the literature on global cities dwells primarily on the experiences of those cities with advanced economies, this paper broadens the scope by contributing to a better understanding of the dynamics of global city formation in the developing world.

Being “global” has become a primary goal of most major cities in the contemporary developing and transitional worlds. Global cities are settings for globalization and the global–local interface, basing points of multinational enterprises (MNEs), and command centers for the global economy and the global urban hierarchy (Friedmann, 1986; Knox & Taylor, 1995; Sassen, 1991). They are characterized by the concentration of MNE headquarters and financial institutions, the lifestyle of the rich and the famous, and glorious skylines. The competition to become a global city has been intensified in developing countries. While a large body of literature exists with respect to the impact of globalization on cities and the formation of world cities, research on the specific mechanisms by which global cities emerge remains limited. This inadequacy stems partly from the dominance of a theoretical or globalist perspective centered on the developed world, and an emphasis in research on the rank of cities in the global urban hierarchy (Hill & Kim, 2000; Yeung & Olds, 2001). Detailed studies pertaining to the specific processes by which global cities emerge in the developing and transitional worlds are largely nonexistent. Nevertheless, the literature on global cities has been expanded to global city regions, emerging global cities and globalizing cities. A small number of studies have started to examine the process by which global cities in Asia emerge and the corresponding policy implications (e.g. Lo & Yeung, 1996; Wu, 2000; Wei & Jia, 2003). Such scholarly attention reflects the quest of several major Asian cities, including Seoul, Hong Kong, Singapore, and Taipei, for becoming global cities, and the unprecedented competition among these cities to become the premier among Asia's global cities. Since the reform of the late 1970s, China has shifted its focus from state socialism and self-reliance to an open door policy and globalization. Despite the concerns for economic dependence, cultural imperialism and the intensification of core–periphery relationship (Taylor & Thrift, 1982), China, like many other developing countries, regards foreign direct investment (FDI) a dynamic force in economic growth and urban development. With decentralization and the push for growth, Chinese cities have stressed the infusion of FDI and the globalization of economic activities. Since the early 1990s, many cities have implemented aggressive measures to attract foreign investment, and major cities have announced aggressive measures to build themselves into global cities and move up in the global urban hierarchy, with the establishment of thousands of development zones targeting FDI. Recently, the major metropolises in China—Shanghai and Beijing in particular—have developed a similar intent. Shanghai has been undergoing dramatic reform and restructuring towards remaking itself into a global city (Cai, Zhang, & Xu, 1995; Olds, 1997; Wu, 2000; Yusuf & Wu, 2002). Beijing has also been taking bold steps to elevate itself to global city status, with its successful bidding for the 2008 Olympic Games. With this background, this paper seeks to explore the role of foreign investment in making Shanghai into a global city. The primary objectives of the paper are twofold: (1) to examine the development process and distribution of FDI in Shanghai and (2) to assess the significance of foreign investment in the transformation of Shanghai into a global city. The spatial distribution of foreign investment in the municipal districts of Shanghai and the functions of the state will be specifically investigated. We will highlight the importance of state policy and foreign investment in the globalization of cities. We intend to reveal the salient features of global city formation in a developing country in Asia. The orthodox global cities in the developed countries are characterized by shrinking manufacturing sectors, investment in advanced business services, capital outflow as well as inflow, and the minimal role for the state. However, although differing in the levels of economic development and political forms, major Asian cities are utilizing foreign investment as a major vehicle for globalization. Besides the service sector, a considerable amount of foreign investment goes into the manufacturing sector. The significant role of industry in Shanghai reflects its status as an emerging global city, and its “Asianness”, similar to Tokyo and Seoul, in emphasizing manufacturing and high-tech production (Hill & Kim, 2000). Moreover, this research illustrates the significant role of the state and development zones in global city formation. Despite the claims of a borderless world and the hollowing-out of the nation states, scholars have argued for the localization of the global, institutional fix, and the embeddedness of MNEs (Amin & Thrift, 1994; Yeung, 1998). The Chinese states have been actively implementing policies to attract more foreign investment and to promote global city formation, and are increasingly competing with each other over policies, resources, and opportunities. This has especially been the situation in Shanghai since the early 1990s, as the city has become the most preferred location for foreign investment and the regional headquarters for most major transnational corporations in Asia. We will analyze the change of state policy and foreign investment inflows, and discuss the role of the state in global city formation in Shanghai. We will demonstrate that despite decentralization and globalization, the Chinese state still serves as an important agent of foreign investment and urban restructuring. As the literature on global cities dwells primarily on the experiences of the advanced economies, this article explores the process and uniqueness of global city formation in China, and we wish to contribute to a better understanding of the dynamics of global city formation in the developing world.

As with most other parts of the developing world, foreign investment is a major force underlying Shanghai's emergence as a global city. Such a development, however, would not have been possible without the open attitude of the state for foreign investment since the early 1990s. It also would not have been possible without the geographical and historical advantages of Shanghai, and the substantial investment in urban and industrial infrastructures in the 1990s. The inflow of foreign investment has led to significant spatial and economic transformation of the municipality. It has reinstated Shanghai's potential as the most important regional headquarters location for multinational corporations and the most important banking and financial center in China. As an emerging global city, Shanghai will be the primary international gateway of China. With the new Pudong International Airport as spearhead, Shanghai is destined to be the engine of growth in the East China region. As a means to promote such growth, Shanghai and the major cities in southern Jiangsu and in northern Zhejiang have begun to collaborate so as to streamline the flow of commodities, personnel, and capital within the region. The growth in the Huninghang (Shanghai–Nanjing–Hangzhou) region will hasten, with the potential to surpass the Zhujiang Delta in economic output in the near future. Nevertheless, despite the inflow of foreign investment and the growth of the economy, Shanghai is still in the early stages of becoming a global city. The remaking of Shanghai into a global city in the future will further growth and globalization of the economy. Further reforming the socialist institutions, advancing technology, and developing advanced producer services are needed to put Shanghai on par with Tokyo and Hong Kong as a major global city in Asia.