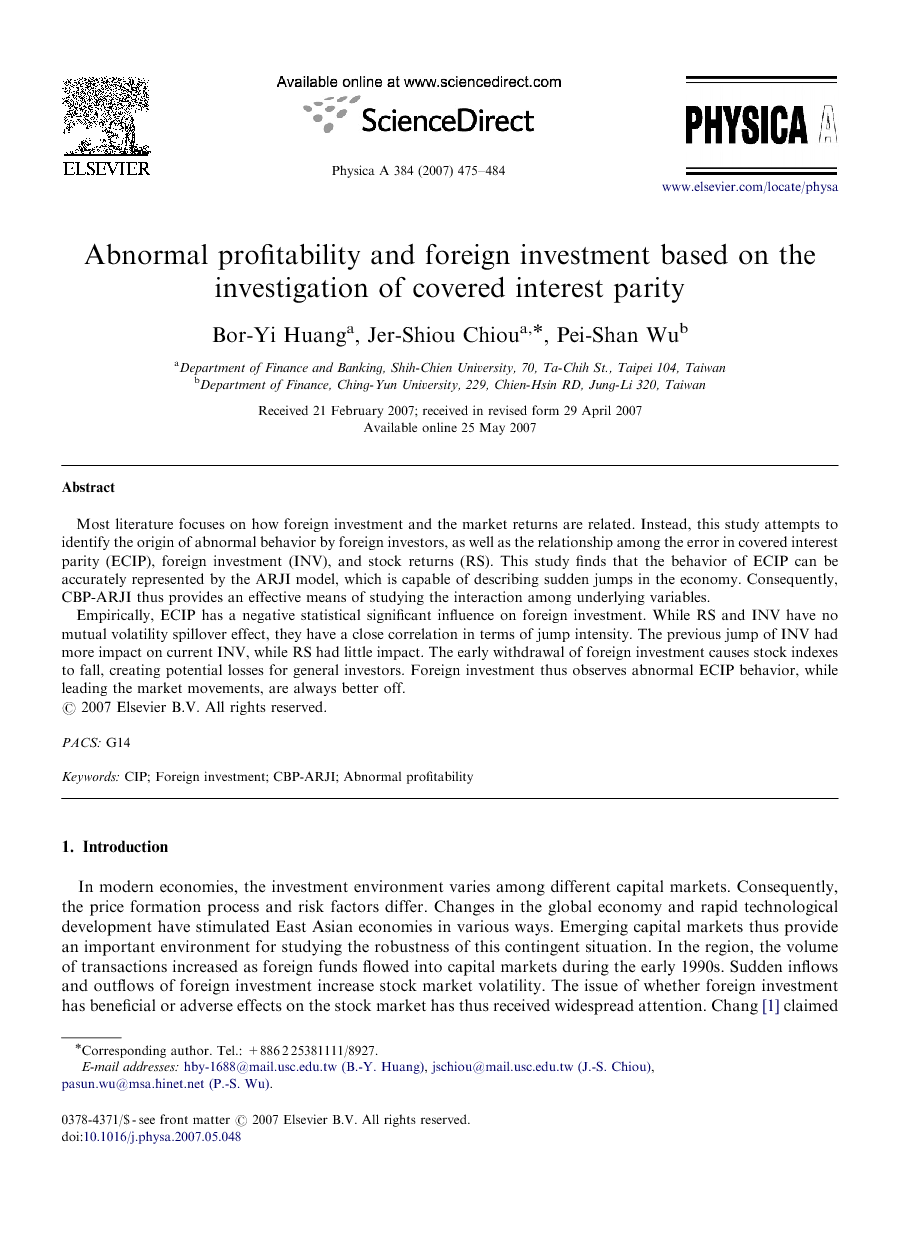 Most literature focuses on how foreign investment and the market returns are related. Instead, this study attempts to identify the origin of abnormal behavior by foreign investors, as well as the relationship among the error in covered interest parity (ECIP), foreign investment (INV), and stock returns (RS). This study finds that the behavior of ECIP can be accurately represented by the ARJI model, which is capable of describing sudden jumps in the economy. Consequently, CBP-ARJI thus provides an effective means of studying the interaction among underlying variables. Empirically, ECIP has a negative statistical significant influence on foreign investment. While RS and INV have no mutual volatility spillover effect, they have a close correlation in terms of jump intensity. The previous jump of INV had more impact on current INV, while RS had little impact. The early withdrawal of foreign investment causes stock indexes to fall, creating potential losses for general investors. Foreign investment thus observes abnormal ECIP behavior, while leading the market movements, are always better off.

In modern economies, the investment environment varies among different capital markets. Consequently, the price formation process and risk factors differ. Changes in the global economy and rapid technological development have stimulated East Asian economies in various ways. Emerging capital markets thus provide an important environment for studying the robustness of this contingent situation. In the region, the volume of transactions increased as foreign funds flowed into capital markets during the early 1990s. Sudden inflows and outflows of foreign investment increase stock market volatility. The issue of whether foreign investment has beneficial or adverse effects on the stock market has thus received widespread attention. Chang [1] claimed that as an informed and uninformed agent problem, two possible equilibriums exist, namely low volatility and high efficiency, and high volatility and low efficiency. Foreign investment, while leading market movements, are always better off to exaggerate the market volatility, despite still having unbiased long-term predictions. A history of high-price volatility was thus created, and is considered the norm for future prediction of the individual investors. That is, the informed created high-volatility history which forced the rational uninformed investors to accept the irrationally volatile price history as a rational basis for future predictions. The result is large risk in the capital markets and thus a loss of efficiency. Stock markets are too volatile to be consistent with the conventional models and thus market efficiency and the rationality of stock market investors has been questioned. Ball and Torous [2] and [3], and Lin and Yeh [4] found evidence of the presence of jumps in the stock price process, and ignoring jumps in financial prices causes pricing and hedging risk. The predictability of stock returns has become an interest issue in the literature [5]. Notably, the volatility of returns differs between emerging and mature markets with emerging markets being subject to more frequent and extended deviations from fundamental value than mature markets [6]. Presumed increase in volatility is most likely suspected due largely to the influx of highly mobile foreign capital. Since foreign capital involves constant either inward or outward remittance of the local currency, exchange rate volatility tends to increase with increased investment of foreign capital. Das [7] found movements in interest rates display both continuous and discontinuous jump behavior. Jumps in interest rate are likely caused by several market phenomena, including money market interventions by the Fed, unexpected news, and foreign exchange market shocks. On the other hand, exchange rate fluctuations introduce a risk on the returns of foreign currency assets; higher risk premiums thus might be requested by foreign investors. A positive relationship is expected between exchange rate risk and interest rate. Small and open economies dependent on international trade should be highly sensitive to the changes of global interest rates and exchange rates. However, to obtain information regarding interest and exchange rates, covered interest parity (CIP) deserves exploration. Limited empirical evidence exists regarding CIP. Under CIP hypothesis, nominal interest rate is determined by the global interest rate plus the future exchange rate, where the formation of such expectation is essential. At the same time, the central banks have the power to act autonomously in individual countries and do so in response to economic changes specific to the country involved. The error in CIP formulation thus satiates some hidden information, including economic and environmental fundamentals, and it worth studying. However, to the best of our knowledge, no previous study has examined the relationship among error in CIP (ECIP), stock returns and foreign investment. This study investigates the impact of interest and exchange rates on foreign investment and stock returns, and applies the CIP perspective to do so. Furthermore, this study investigates the behavior of foreign investors. Taiwan vs. USA was selected as the case study because its experience in this case can function as a guide for other developing countries, which also face a challenge in relation to the effects of foreign investment. Specifically, an assessment of the overall impact of ECIP on stock returns and foreign investment can help countries predict the likely consequences of opening up, making them more cautious in decision making regarding capital markets.

Generally, the CIP specification is empirically violated. One notable explanation for this failure is the existence of a time-varying risk premium as a means of providing compensation for foreign currency speculation. The failure can then be represented by the source of the unanticipated differential which can be captured by the error term of CIP. This study investigates the relationship among error in CIP (ECIP), foreign investment (INV), and the stock returns (RS). A two stages methodology is developed in this study. First, the property of ECIP is investigated. Next, the model of CBP-ARJI is used to examine the interactions among stock returns, foreign investment, and ECIP. Empirically, ECIP was found to have a negative statistical significant impact on net foreign investment. While stock return and net foreign investment exert no mutual volatility spillover effect, they have a high correlation for jump intensity. The previous jump in net foreign investment exerts a large impact on current net foreign investment, but stock return does not. The results presented in this study demonstrate that when the exchange rate and international interest rate markets experience unexpected fluctuations, foreign investment tends to withdraw from an open and international trade dependent financial market, while the market return is not statistically affected. Chiou [24] noted that foreign investments are always a step ahead of general investors. This early withdrawal of the foreign investment causes the stock index to fall and creates potential losses for general investors, but foreign investors suffer less and may even benefit. Most of the existing literature focuses on the relationship between the foreign investment and the market returns. This study instead focuses on identifying the origin of this abnormal behavior of the foreign investment. This study found that for small trade dependent economies, the international economics proxy, ECIP, is the key factor that initiates the sequential outcomes. That means, foreign investment observes the abnormal ECIP's behavior, while leading the market movements, are always better off to exaggerate the volatility of the market. The high volatility price movement histories are, thus, created and are regarded as the norm for future prediction of the individual investors. In other words, the informed created the high volatility history which forced the rational uninformed investors to accept the irrationally volatile price history as a rational basis for future predictions. Unsurprisingly, the behavior of ECIP can well be represented by the ARJI model, and sudden economic jumps can be well-represented. Consequently, CBP-ARJI can be adopted to study the interaction among underlying variables.