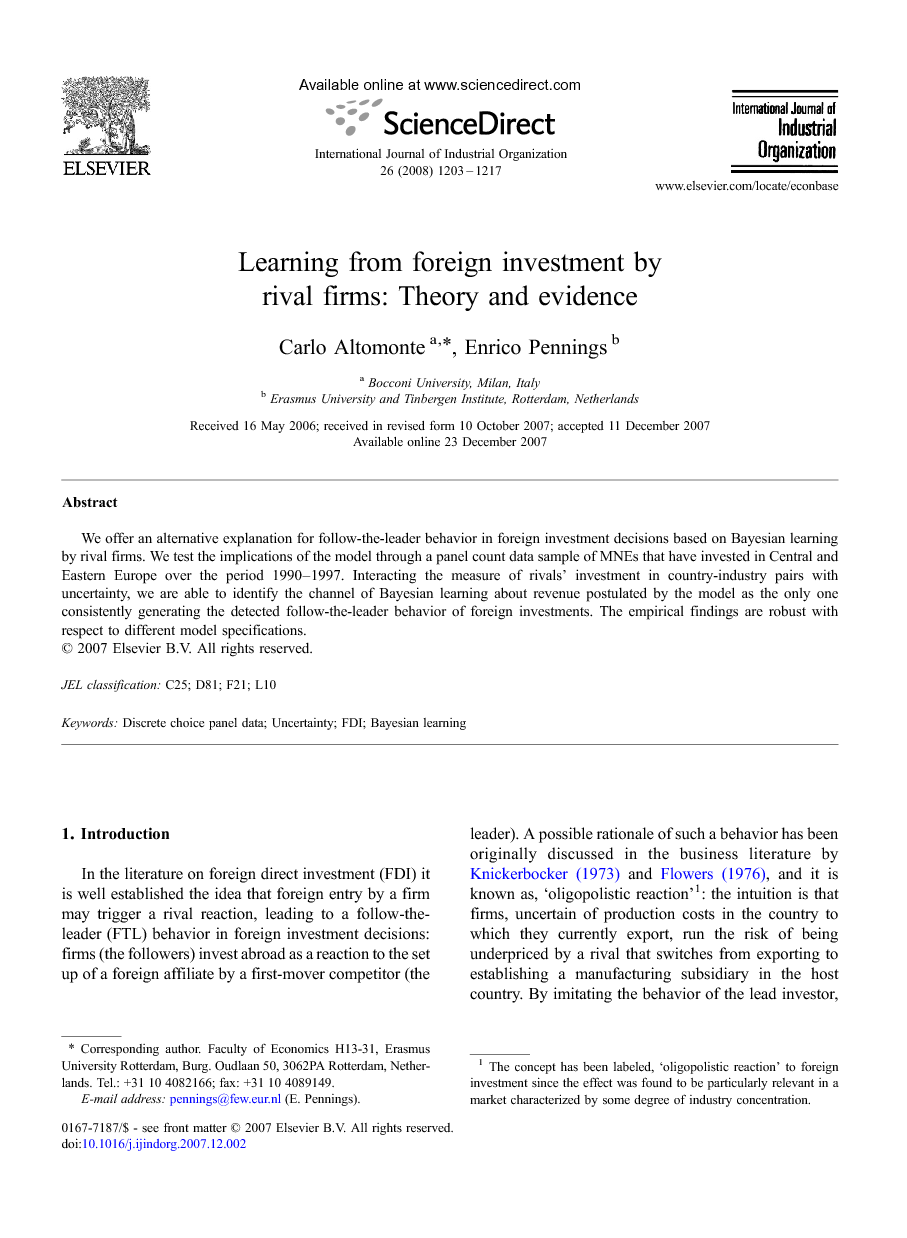 We offer an alternative explanation for follow-the-leader behavior in foreign investment decisions based on Bayesian learning by rival firms. We test the implications of the model through a panel count data sample of MNEs that have invested in Central and Eastern Europe over the period 1990–1997. Interacting the measure of rivals' investment in country-industry pairs with uncertainty, we are able to identify the channel of Bayesian learning about revenue postulated by the model as the only one consistently generating the detected follow-the-leader behavior of foreign investments. The empirical findings are robust with respect to different model specifications.

Paying tribute to the original intuition by Knickerbocker (1973), we have been able to derive a general theoretical model of rival MNEs' reaction based on Bayesian learning from first mover investors, encompassing the main implications of alternative models developed by the literature, and testing the resulting propositions on the actual behavior of rival MNEs. We find evidence for our theoretical propositions, showing that, alongside more traditional determinants of FDI, follow-the-leader behavior driven by Bayesian learning by rival firms plays a significant role in driving MNEs' decisions to invest abroad. More specifically, the results indicate that firms learn about revenue rather than cost. This result is robust with respect to different model specifications which control for both industry and country heterogeneity. Two future lines of research are evident to us. First of all, the long studied issue of FDI seen as strategic substitutes or complements might be worth another closer look. In our paper, FDI are strategic substitutes only after a certain threshold in the number of rivals is reached, and only with respect to FDI undertaken in countries different than the one in which the considered investment is taking place. When previous investments in the same country are considered, instead, our study suggests that agglomeration effects and Bayesian learning make FDI decisions strategic complements. As a result, the effects of FDI substitution or complementarity seem to be a function of the geographical space in which rivals are considered. Second, it is obvious that the use of categorical dummies for modelling previous investments suffers from some potential shortcomings, threshold effects being the most evident ones. Therefore, the results of this paper should be validated as soon as the new econometric techniques on dynamic discrete panel data models move from the frontier of theoretical research to more routinely methodological tools.