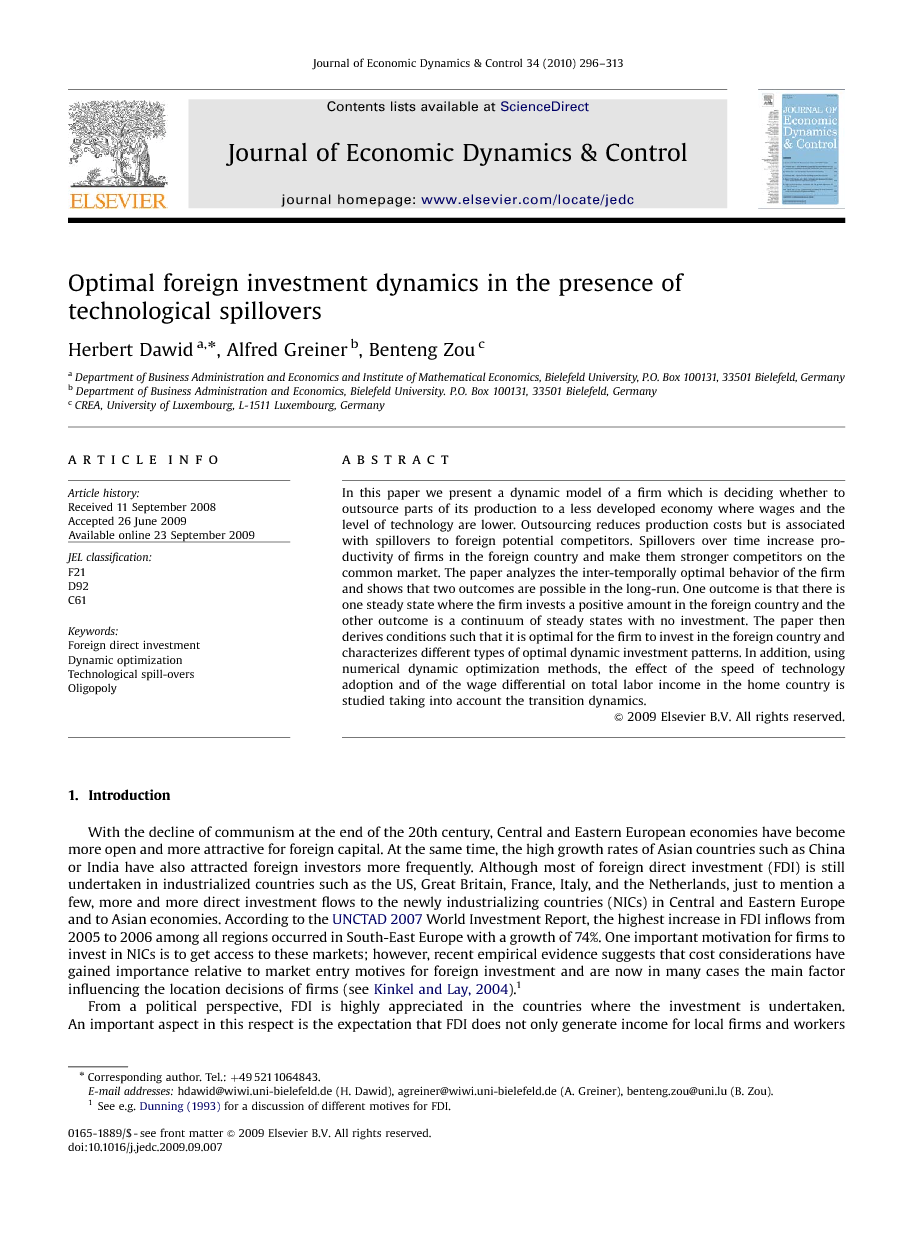 In this paper we present a dynamic model of a firm which is deciding whether to outsource parts of its production to a less developed economy where wages and the level of technology are lower. Outsourcing reduces production costs but is associated with spillovers to foreign potential competitors. Spillovers over time increase productivity of firms in the foreign country and make them stronger competitors on the common market. The paper analyzes the inter-temporally optimal behavior of the firm and shows that two outcomes are possible in the long-run. One outcome is that there is one steady state where the firm invests a positive amount in the foreign country and the other outcome is a continuum of steady states with no investment. The paper then derives conditions such that it is optimal for the firm to invest in the foreign country and characterizes different types of optimal dynamic investment patterns. In addition, using numerical dynamic optimization methods, the effect of the speed of technology adoption and of the wage differential on total labor income in the home country is studied taking into account the transition dynamics.

In this paper, we have presented a dynamic model of a firm which competes with local and foreign firms in an oligopolistic market. The firm has an incentive to invest and produce in a developing country because of lower unit costs there but raises the technology level of its potential competitors in the developing economy by investing, due to spill-overs of investment. Our analysis shows that there are two possible types of long run outcomes—a catch-up scenario in which the domestic firm invests abroad and the productivity of the foreign competitors in the long run matches the productivity of the domestic subsidiary in country F, and a no-innovation scenario in which the domestic firm decides against FDI. In the absence of an initial capital stock in the foreign country, positive investment is optimal if the technological gap is either very large or very small. Furthermore, we have shown that an implication of the co-existence of these two scenarios is a non-continuous dependence of key variables like long-run foreign capital, long-run prices, or accumulated domestic labor income on parameters of the model. We have focused on the impact of changes in the initial productivity gap or in the domestic wage level and have shown that a slight decrease in the domestic wage level or a slight increase of the initial productivity gap might have substantial positive effects on the domestic labor income by inducing the transition from a catch-up scenario to a no-investment scenario. Furthermore, depending on the initial level of the productivity gap, a marginal decrease of the wage level, which does not lead to a transition between scenarios, might have negative (in the no innovation scenario) or positive (in the catch-up scenario) effects on domestic labor income. If we assume that even without FDI the productivity gap will slowly close over time, these findings suggest that the qualitative effect of changes in the wage level might change radically over time. Clearly, this has implications for wage policy if domestic labor income is of concern. Finally, we have shown under which circumstances patterns of positive foreign investment followed by disinvestment correspond are in accordance with intertemporally optimal behavior of the investing firm. The fact that we consider a scenario where only one of the firms in country H has the opportunity to invest abroad might be seen as a severe restriction of our analysis. However, this is not the case. A straightforward extension of our model where all m firms in country H can invest leads to a differential game model, and it is easy to show that no matter whether symmetric open-loop or stationary Markovian Nash equilibria are considered, 10 there is again a unique catch-up steady state where each investor holds exactly the steady-state foreign capital stock calculated in our single investor setup. Furthermore, for all values of the technology gap where a single potential investor should abstain from FDI, there is an (open-loop or stationary Markovian Nash) equilibrium where all potential investors abstain from investing. 11 The intuition for this result is straightforward. In a scenario with several potential investors, deviation of a single firm from the zero investment strategy might induce positive investments of the other potential investors which has a negative impact on the deviators’ profit. Accordingly, incentives to start positive foreign investments in a setup with multiple potential investors are smaller than in the scenario considered in this paper where no other firm can invest abroad. Therefore, the main qualitative findings derived for the single investor case carry over to a scenario with multiple potential investors. As to future research, several extensions of the model should be considered. In the current analysis, the level of the technology associated with the direct foreign investment was considered as given. It would be interesting to study optimal investment behavior allowing for an endogenous determination and dynamic changes of the technological level the firm uses in the foreign country. Furthermore, the choice of R&D investments of the firms in the foreign country might be incorporated into the analysis. There is empirical evidence and much discussion in the literature about the fact that a firm's ability to absorb technological spillovers depends positively on its R&D activities (see e.g. Cohen and Levinthal, 1989). Taking into account such effects would make the spillover intensity λλ an endogenous variable and generate strategic effects between the competitors in the different countries.